Taste the bounty, from sunup to sundown
PREVIOUS IMAGE 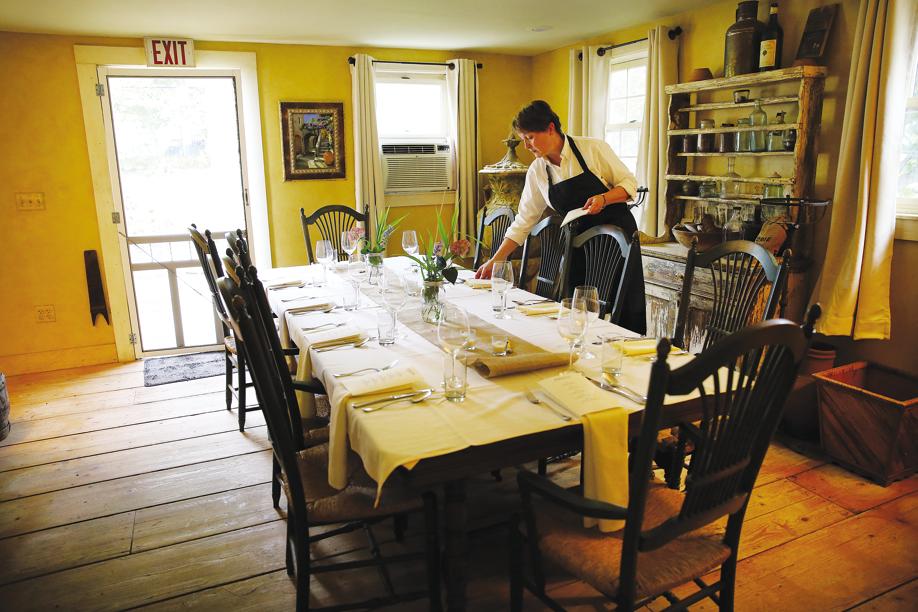 Clockwise from top left: breakfast in Scituate at Lucky Finn Cafe; Neil Ayer and Linda Lyons of Wenham dine after biking to the Organic Garden Cafe in Beverly; chef Will Gilson jokes with guest Thomas Leureault at the Herb Lyceum in Groton.Clockwise from top: Janet White sets a table at the Herb Lyceum in Groton; Norwell resident Jane Rohan and her daughters had breakfast at the Lucky Finn Cafe in Scituate; the Organic Garden Cafe in Beverly was the destination for cyclists Neil Ayer and Linda Lyons, both of Wenham; chef Will Gilson gathers lovage in a greenhouse at the Herb Lyceum. (David L. Ryan/globe staffCraig F. Walker/Globe StaffLaurie Swope for the boston globeCraig F. Walker/Globe Staff) 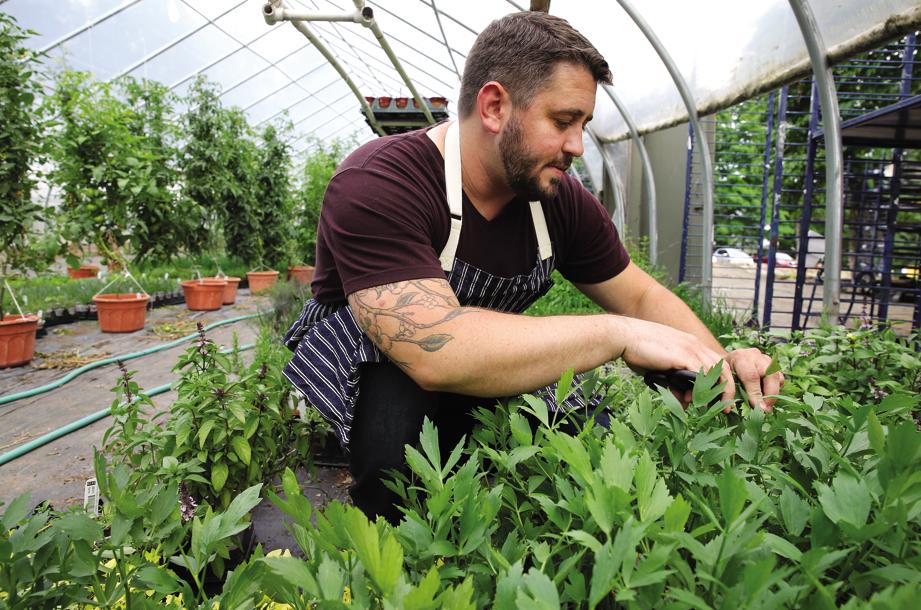 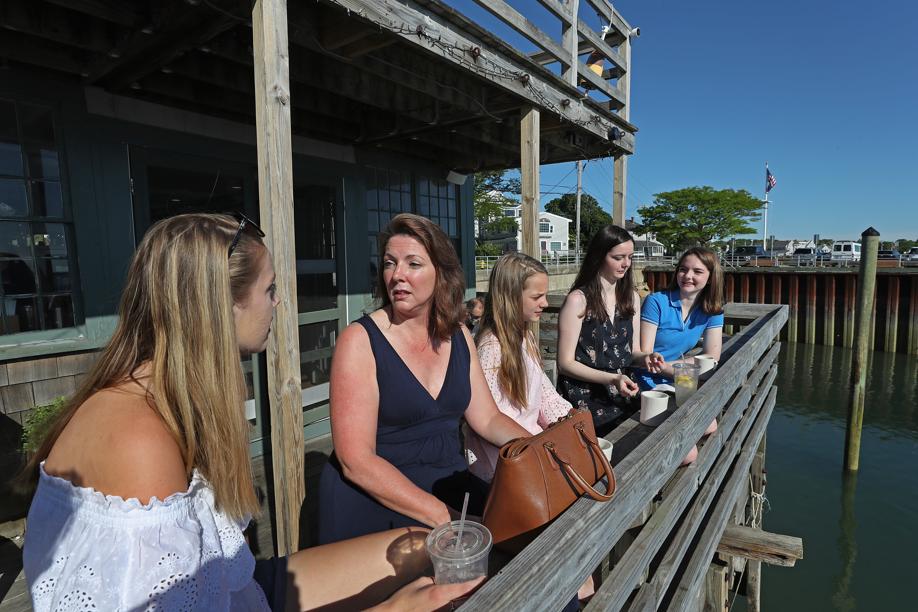 Laurie Swope for the Globe 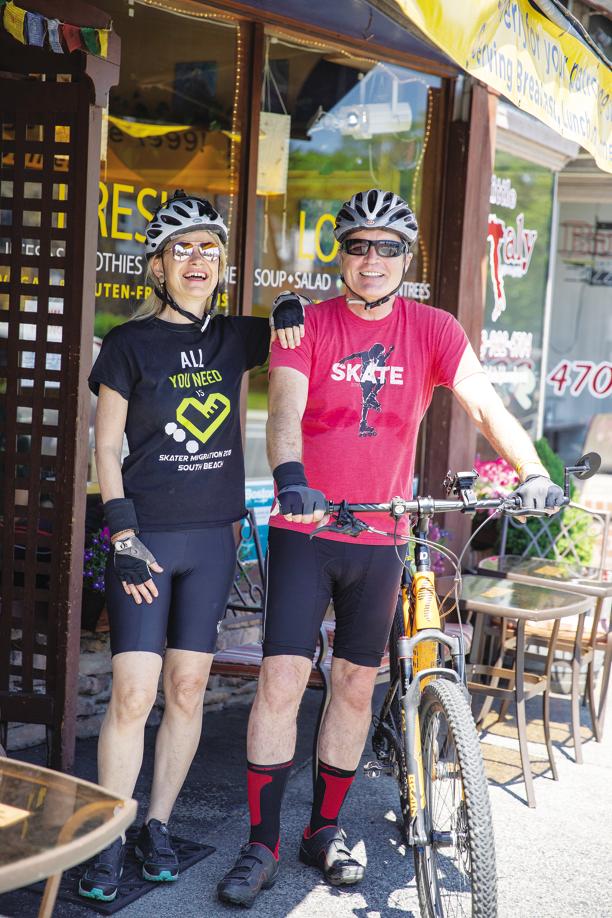 Strings these words together like seashells on a necklace, and you’re in Scituate Harbor sipping coffee while the sun rises, pedaling to a restaurant in downtown Beverly for lunch, or inhaling the fragrance of lavender and mint growing in gardens outside a restaurant in Groton that conjures up Provence and Tuscany.

In summer, eating and the outdoors are synonymous.

On a recent June morning, Norwell resident Jane Rohan and her four daughters sat on the dock outside the Lucky Finn Cafe at Scituate Harbor, so close to the water that if one of their flip-flops slipped off, it would have landed in the ocean.

Rohan, 50, ordered hot coffee. Her oldest two had iced drinks, lemonade and iced coffee; the youngest girls had hot chocolate with whipped cream. The five of them shared croissants and a raspberry pull-apart.

“Summer breakfast is something you put in your hand and walk out the door,’’ said Rohan, who after the quick bite dropped Emily, 11, off at school and drove the oldest three, Caroline, 19, Annie, 18, and Katherine, 15, to their summer jobs.

But briefly, she sipped her coffee, inhaled the salt air, and watched the sun dance on the water.

“It’s the closest thing to being in a boat,’’ she said.

The Lucky Finn Cafe, purchased a year ago by Norwell resident Mary Ellen Stoddard, is located in a former boathouse and open all year round. But in summer, the owner tweaks the menu, adding affogato, a scoop of vanilla ice cream over espresso, and buying more of the cafe’s top-selling blueberry croissants and other pastries and breads, some made in small batches at local bakeries.

A variety of egg and bagel sandwiches also appeal to summer appetites. So does “The Figgie,’’ a grilled cheddar and bacon sandwich with fig spread, started as a fall special and now available in the summer, too.

This is the season when customers splurge.

“People are likely to indulge a little bit,’’ Stoddard said.

Take lunch at the Organic Garden Cafe in Beverly, where summer specials utilize the local harvests.

“I tend to go for fewer grains for dishes that feature more summer veggies with some form of vegetable protein,’’ he said.

A few times a week, Wenham residents Neil Ayer and Linda Lyons ride their bikes to the Organic Garden Cafe for lunch, 10 miles as the crow flies.

“Every time I come here, I have a shot of wheatgrass,’’ said Ayer, 65, who on a recent weekday parked his bike and was waiting inside for Lyons, 58, who was running an errand.

Both started their meal with double shots of the green juice.

Then they ordered a summer feast, enough to ensure there would be leftovers to carry home.

For dessert, they agreed on a Mighty Bar, a raw chocolate-dipped bar made with almond butter, nuts, seeds, coconut, cacao nibs, and goji berries, which they packed and carried with what was left of Ayer’s salad.

“It was the perfect summer lunch,’’ Lyons said.

Dinnertime finds Will Gilson in the small kitchen at the Herb Lyceum at Gilson’s, a farm-to-table restaurant on a 4-acre farm in Groton. The chef-owner had just grilled a tray of oysters, the first course of a five-course prix fixe dinner: oysters Rockefeller, salmon tartare, celery root bisque, roasted duck breast, and chocolate cremeux.

Servers Janet White and Gwen Lapin had set three tables for 30 guests and were adding the finishing touches: sprays of lavender and fuchsia-colored flowers just picked from the gardens and arranged in Mason jars; tea lights, lit one by one, and placed at intervals from one end of each table to the other.

The Herb Lyceum serves dinner, by reservation only, on Fridays and Saturdays throughout the summer. Guests bring their own wine or beer. There is just one sitting. And people linger, often until closing.

Gilson, who owns and operates Puritan & Company in Cambridge, creates seasonal menus inspired by the herbs, vegetables, and fruit grown on the Groton farm and purchases fresh produce from other local farms.

“To me, summer [cooking] is grill, grill, grill,’’ he said. “Watermelon salad and fresh tomatoes. . . . pork chops with salsa verde made with herbs from the garden. Fruit dessert.’’

Patrons were clearly in agreement.

On this Friday evening, Northborough residents Grace McGonagle and Thomas Levreault, and their friend Peg Martin, who lives in Shrewsbury, were standing on the patio outside the dining room, enjoying the view.

A few feet away, an ancient hickory, strung with lights, thrust its leafy branches toward the sky. Closer, grape vines twisted around a pergola. And everywhere, the scent of herbs and flowers filled the air.

Hattie Bernstein can be reached at hbernstein04@icloud.com.

PREVIOUS ARTICLE
Article 166 of 188
NEXT ARTICLE