A march for RFK, and his arc of history
Group pays tribute 50 years after assassination
PREVIOUS IMAGE 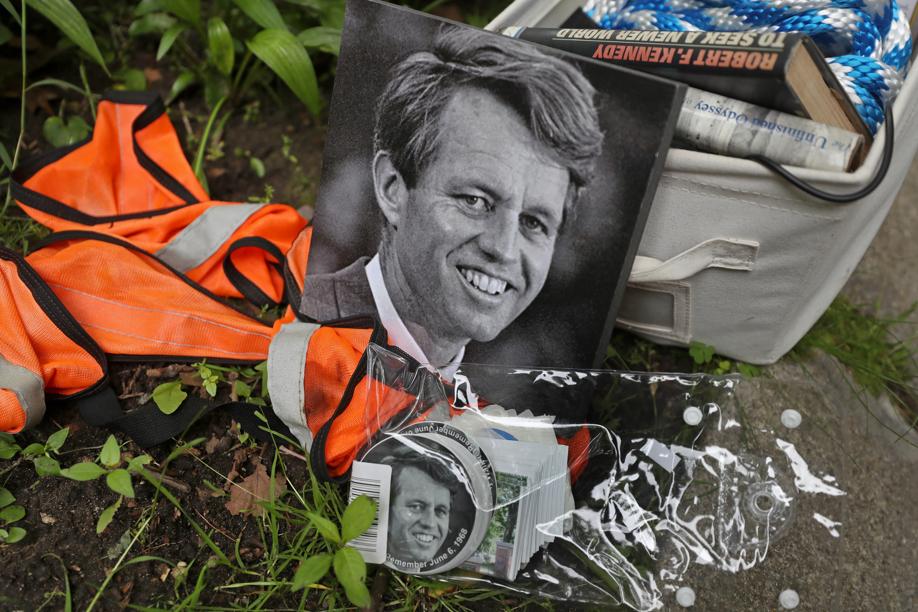 The RFK Walk to Remember, on the 50th anniversary of the assassination of Robert Francis Kennedy, started at RFK’s childhood home in Brookline.Memorabilia of Robert F. Kennedy rested on the ground at the family home in Brookline where brother John F. Kennedy was born; it was where Wednesday’s march began. (David L. Ryan/Globe StaffDavid L. Ryan/Globe Staff)
By Emily Williams
Globe Correspondent

Randa, who was a junior in college when Kennedy was slain, emulated his messages of nonviolence and social justice, channeling­ them into a life of activism and the founding of the Peace Abbey and the Life Experience­ School in Millis. Both are dedicated to Kennedy’s memory.

“We all find a way to grab hold of the essence­ of our grief, “ Randa said. “And then we do something with it.’’

On Wednesday, 50 years after Kennedy was gunned down just when the presidency seemed within his grasp, Randa led a march of more than three miles from Kennedy’s childhood home in Brookline to the State House. The group, numbering about a dozen people at times, paid tribute to Kennedy along the way by recalling his impact on their lives.

The tribute was one of many held around the country, including at Arlington National Cemetery, to commemorate Kennedy’s remarkable life.

“Kennedy is a hero,’’ said local marcher Phil Lussier. “He would have been a great president.’’

Lussier and several others on the trek were members of the Life Experience School, which has provided educational resources for people with learning challenges, neurological disorders, epilepsy, and other developmental disabilities since 1972. They sported stickers with Kennedy’s face on their shirts and jackets.

Jan Krause Greene recalled when she, at 16 years old, was invited by Kennedy to do volunteer work in his office when he was a US senator from New York. She had sent him a copy of an essay she wrote about his book “Just Friends and Brave Enemies.’’

Besides telling Kennedy about how much he had inspired her, she wanted an answer to her question: “What can a teenager do to start change?’’

Greene wore a cap stitched with “Cultivate Peace’’ and earrings in the shape of globes and carried an electric candle on Wednesday’s walk to the State House.

The marchers also carried a selection of artifacts: a large poster of Kennedy, an American flag with the stars replaced by a peace sign, and a Styrofoam hat with faded blue and red stripes and the words “Kennedy Will Win.’’

Randa has held onto the hat since his days of campaigning for Kennedy as a student at the University of Iowa.

The soundtrack for the walk was a selection of Kennedy’s famous speeches that blared from a speaker Randa had hung on the handle of Lussier’s wheelchair.

The reactions of passerby during the trek were largely determined by age. A man stopped the marchers before they entered the Public Garden in Boston. “I’ll never forget where I was when I found out he was shot,’’ the man said. Kennedy was shot June 5, 1968.

One woman gave a peace sign as she encountered the troupe on the street.

“Most of the people here are too young to recognize [RFK’s] voice,’’ Randa said as the group passed through the mid-afternoon crowds on Boston Common.

A cluster of elementary school-age children passed the marchers and, spotting Kennedy’s face on a poster, began cheering for the group, some chanting “Kennedy!’’ as they walked past.

“They have good teachers,’’ Randa said.

Once the group reached the State House, their ranks had dwindled to eight marchers and Randa’s golden retriever.

But their resolve remained firm.

Greene closed the tribute with one of her favorite Robert Kennedy quotes:

“Few will have the greatness to bend history itself, but each of us can work to change a small portion of events, and in the total of all those acts will be written the history of this generation.’’

PREVIOUS ARTICLE
Article 40 of 149
NEXT ARTICLE