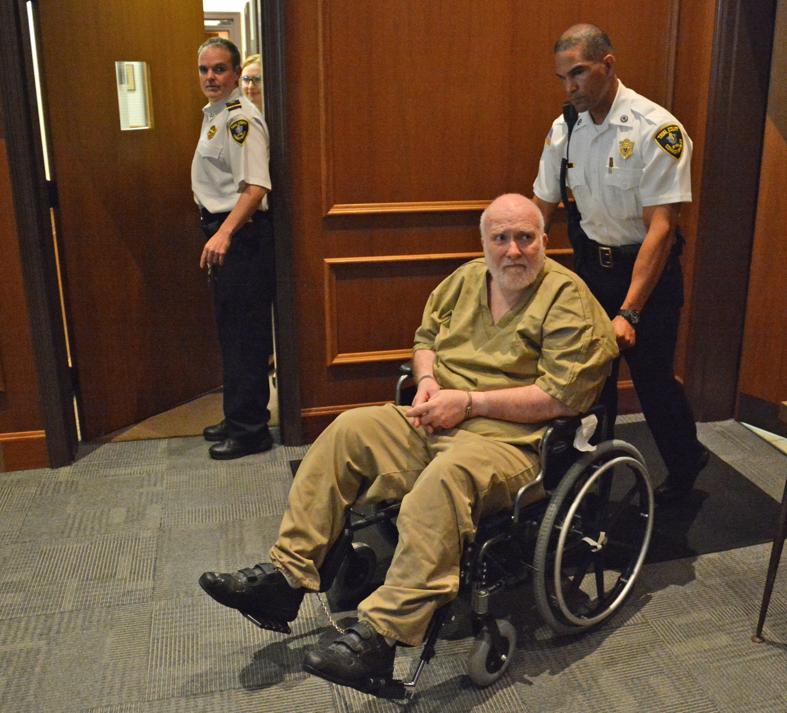 Convicted child rapist Wayne W. Chapman, whose impending release after 40 years in state custody is being contested by some of his victims, is facing new sexual misconduct charges.

Chapman, 70, is accused of indecent exposure and committing lewd acts on Sunday and Monday at the state prison in Shirley where he was being held pending his release, according to the state Department of Correction. At his arraignment Wednesday in Ayer, a judge ordered that Chapman be held without bail on those charges.

Chapman, who completed his sentence for child rape and other offenses in 2004, had remained incarcerated under a state law that allows for the continued detention of offenders deemed too dangerous to release. But last month, two psychologists concluded that Chapman no longer fits the legal criteria to be considered a sexually dangerous person, because of his age and medical conditions.

At least one of Chapman’s victims and others connected to his crimes publicly protested his release, contending he is still a sexual predator who will target more children. Wendy Murphy, a lawyer representing “victims, parents of victims, and/or members of the community that suffered harm’’ sought to block Chapman’s release, but a justice of the Supreme Judicial Court ruled Monday that they had no standing to do so.

Murphy, who said she plans to push ahead with an appeal of Chapman’s release, said Wednesday that her clients were “relieved’’ by the new charges.

“One of them was sobbing. I couldn’t understand what the words were because the tears were so powerful, she said. “They’re very relieved, putting it mildly.’’

Murphy elaborated in a written statement.

“It boggles the mind that not one but two qualified examiners could find this man not sexually dangerous,’’ she said. “The absurdity of their decisions is why we have been fighting so hard to prevent his release. This is not a frail man with a walker. This is a dangerous man with no conscience — who used knives, rope, and duct tape on his child victims and boasted about feeling pleasure in their pain.’’

Governor Charlie Baker’s office said Wednesday that he has filed legislation that would punish serial child rapists with a sentence of life without parole and give judges an expanded role in deciding when sexually dangerous persons are freed. Under current law, a judge is required to release the offender if two experts agree the person is not a threat to society.

Baker’s proposal would require judges to hold a hearing if other forensic experts disagree with the qualified examiners.

“Serial child predators should be behind bars for the rest of their lives, not out in our communities,’’ Baker said in a statement, adding that his administration is ready to work with lawmakers to pass his bill.

According to the Department of Correction, Chapman’s new charges stem from incidents on Sunday and Monday. A department report said Chapman was seen lying in his bed in his cell Sunday “with no pants or underwear on,’’ and that he “was given several direct orders to put on pants or cover his genitals.’’ Chapman eventually complied, but the report notes that Chapman’s cell “is in direct view of the nurses’ station.’’

The employee who witnessed the incident said “she believed that his actions were deliberate and she felt violated and disgusted by his behavior,’’ the filing said.

Eric Tennen, a lawyer for Chapman, declined to comment Wednesday. A not-guilty plea was entered on Chapman’s behalf during his arraignment. Before the new charges, Tennen was working to find a place for Chapman to live; he was being held at the Shirley prison in the interim.

In September 1977, Chapman was convicted of raping two boys in Lawrence and sentenced to 15 to 30 years in prison.

In both cases, evidence revealed that Chapman lured young boys into wooded areas under the pretext of searching for his missing dog and then sexually assaulted them.

In addition, Chapman has been implicated in the disappearances of two young boys in Massachusetts in the 1970s. He has repeatedly denied murdering any children, according to court records.

Lawrence Police Chief Roy Vasque said last month that Chapman remains a person of interest in the 1976 disappearance of 10-year-old Andy Puglisi, which remains under investigation.

“When he gets out, we will certainly make an attempt to speak with him,’’ Vasque said.

Chapman’s next court appearance is scheduled for June 27.

Laura Crimaldi of the Globe Staff contributed to this report. Material from the Globe archives was also used.

PREVIOUS ARTICLE
Article 41 of 149
NEXT ARTICLE