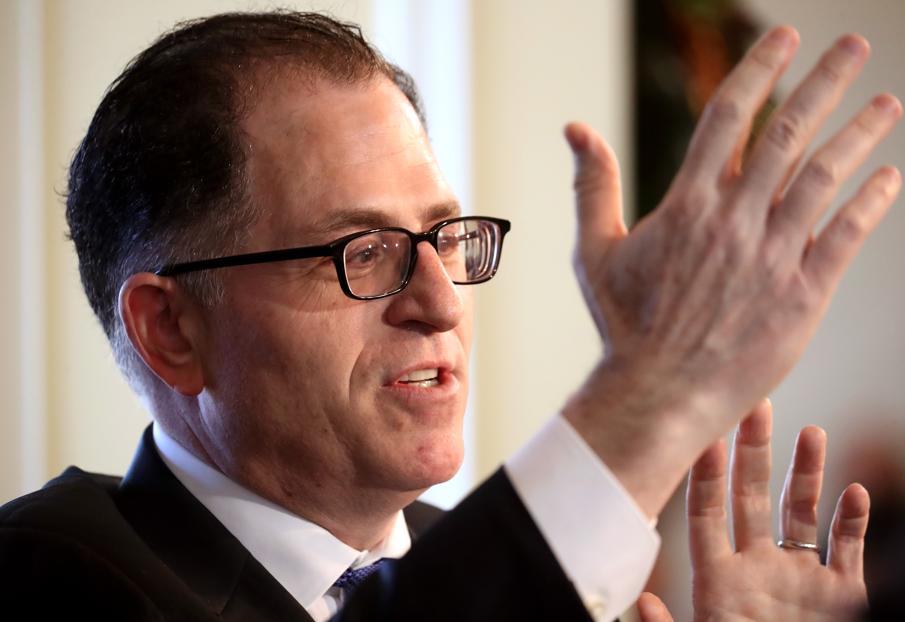 Attendees at the Boston College Chief Executives Club luncheon heard from Michael Dell, chairman & CEO of Dell Technologies.Michael Dell said the corporate cultures of EMC and Dell have turned out to be “quite compatible.’’ (David L. Ryan/Globe Staff)
By Jon Chesto and Andy Rosen
Globe Staff

The $60 billion mega-merger of Dell and EMC is now more than a year in the books. But in his first public speaking appearance in Boston since the deal, chief executive Michael Dell on Tuesday discussed how he first set his sights on EMC as far back as 2008.

Speaking before a Boston College Chief Executives Club luncheon, Dell related how he approached then-EMC chief executive Joe Tucci a decade ago about a merger, when both companies were publicly traded. But then the financial crisis wreaked havoc in the markets, and the deal became difficult to pull off.

He eventually got his prize in mid-2016, in what is considered the largest pure-tech merger in history. Now, a year later, the deal that created Dell Technologies is working out better than expected, Dell said while being interviewed before the crowd by Boston Globe managing director Linda Pizzuti Henry.

Texas-based Dell Technologies employs about 8,800 people in Massachusetts, nearly the same size as EMC’s local workforce before the merger closed. Dell said the two corporate cultures turned out to be “quite compatible.’’

The company is spending more than $4 billion a year on research and development, and a significant portion of that work is happening in the Boston area, including in data storage and security.

“The teams here in Boston are a very important part of that engine,’’ Dell said.

And the cross-selling of products to clients — one of the big selling points of the merger — has exceeded Dell’s initial expectations. He said the “revenue synergies’’ are about $2 billion a year above what he had forecast. The company reported $37 billion in revenue in the first six months of its fiscal year, putting Dell Technologies on track to exceed $70 billion for the full year.

“The real idea behind this: You create the essential [computer] infrastructure company, the company that’s number one in everything, all in one place,’’ Dell said.

Dell is positioning the company for an age in which electronic devices are getting smarter and more connected; many will need to interact with on-site storage machines, such as those Hopkinton-based EMC became known for. Dell Technologies is poised to be a pivotal player in what Dell calls “a fourth industrial revolution.’’

“We see a huge buildout in infrastructure because of the intelligence that’s embedded in all these objects,’’ Dell said.

EMC and Dell first combined forces with a sales alliance that began in 2001. Then in 2008, Dell said he called Tucci and suggested a full merger. Secret talks ensued, but bankers walked away from the deal the following year because of the financial crisis.

Dell subsequently took his namesake company private in 2013, to help shield it from Wall Street’s quarterly demands. Less than a year later, he approached Tucci again to restart merger talks. This time, the timing turned out to be right.

The company hasn’t disclosed how many jobs have been cut following the merger.

As was the case with EMC before combining with Dell, industry observers say there continue to be layoffs with the new company, while some workers are leaving for other opportunities.

“Perhaps a few years ago, I might have presented an opportunity where someone at EMC might have said, ‘No, I’m very happy,’ ’’ said Larry Kahn, vice president at the recruiting firm New Dimensions in Technology Inc. “Now with some of the uncertainty . . . they might be more interested in the opportunities I might have.’’

Dell told reporters that it’s natural that some executives would want to leave following a merger of this size.

Steve Duplessie, founder of IT research firm Enterprise Strategy Group, said he believes the departures from EMC were largely concentrated in operations like marketing and finance, areas where there would be more overlap with Dell’s corporate structure.

“EMC was a bit maniacal in terms of winning. They didn’t suffer fools kindly, but 10 years ago there just wasn’t any other place you could go,’’ Duplessie said. “It always sucks to get fired but now’s a [better] time to get fired.’’

PREVIOUS ARTICLE
Article 72 of 155
NEXT ARTICLE