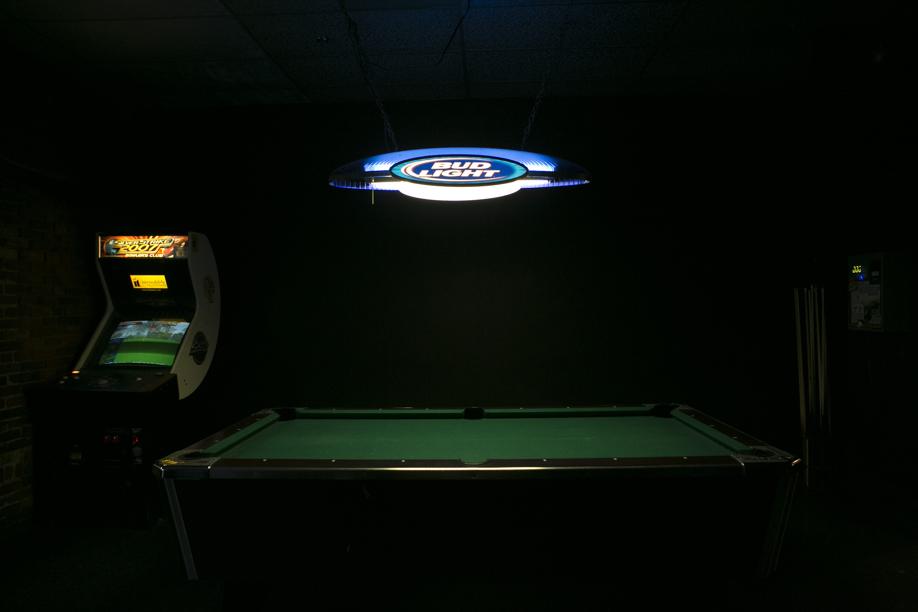 Anheuser-Busch argued Tuesday that giveaways of coolers and draught beer dispensers to Massachusetts bars and liquor stores was a merchandising plan. Branded free items like lampshades (above) and coasters are allowed under ABCC rules, but those that reduce retail space are not. (Katherine Taylor for The Boston Globe/File 2015)
By Dan Adams
Globe Staff

Anheuser-Busch on Tuesday forcefully disputed charges that it tried to stifle competition by giving away nearly $1 million in refrigeration and beer-dispensing equipment to Boston-area bars and liquor stores in 2014 and 2015.

In May, investigators from the state’s Alcoholic Beverages Control Commission accused the brewer’s Medford distribution subsidiary of gifting coolers and draught beer dispensers worth a total of $942,200 to 441 Boston-area retailers, which in return agreed to stock the equipment with Budweiser and other Anheuser-Busch beers.

But in a hearing before the ABCC’s three commissioners, attorneys for the international beer conglomerate insisted Tuesday that the giveaways — which included coolers with video screens worth up to $5,700 each — were an ordinary merchandising program intended to place Budweiser and Bud Light logos in front of consumers, not a quid pro quo deal with retailers. Punishing Anheuser-Busch, they argued, would have the effect of outlawing routine industry marketing practices such as giving retailers branded umbrellas, clocks, coasters, and other promotional gear.

“Far from some clandestine kick-back scheme, [Anheuser-Busch’s Medford subsidiary] engaged in only a highly visible marketing campaign aimed at increasing recognition of Anheuser-Busch products,’’ Richard P. Campbell, the company’s attorney, wrote in a filing to the ­ABCC. He said such campaigns were “undertaken by all competitive beer distributors.’’

The commission typically takes several months to issue rulings. If it finds Anheuser-Busch responsible, it could suspend the company’s alcohol license; however, sanctioned companies are typically permitted to remain open if they pay a fine based on the revenues they would have lost while closed.

On Tuesday, Campbell disputed the charges on multiple grounds as he asked the ABCC to absolve Anheuser-Busch.

For one thing, he said, the equipment remained the property of Anheuser-Busch’s local wholesaler and was essentially loaned, not gifted, to the retailers. He also revealed that the quantity of Anheuser-Busch products sold at the involved retailers fell by 7 percent the year after they accepted the equipment. Campbell said the decline undercuts the state’s claims that gifting coolers and dispensers gave the company an unfair advantage over other beer brands. However, during this period the domestic beer market was struggling, and sales of Anheuser-Busch products in the United States, as with other mass-market brewers, were in decline.

Furthermore, Campbell complained that the ABCC suddenly began cracking down on the long-tolerated and widespread practice without giving reasonable notice to alcohol businesses.

“There’s a matter of fundamental fairness here,’’ Campbell told the ­ABCC’s three commissioners Tuesday. “It’s just not right that [Anheuser-Busch] can engage in standard, routine business activities’’ only to have “a retrospective, late determination that [the regulation] prohibits that activity.’’

Most important, Campbell argued, the ABCC regulation banning inducements “has no validity’’ because the Legislature in the 1970s repealed a section of the state alcohol law that had barred the practice and other forms of discounting.

In a recent court decision on another pay-to-play case, a Suffolk Superior Court judge found that the inducements ban had been rendered invalid in the 1970s — but also said the regulation could still be applied to enforce a separate law banning “price discrimination,’’ or distributors giving discounts only to some retailers and not others. The ABCC did not charge Anheuser-Busch with price discrimination.

The ruling further clouded the legal waters surrounding the rule, which has been assailed by both supporters and critics for its confusing wording. For example, the regulation bans gifts of “substantial value’’ without defining “substantial.’’

Ted Mahony, the ABCC’s chief investigator, stood by the rule at Tuesday’s hearing, noting it actually predates the enactment of the law repealed in the 1970s. He framed Anheuser-Busch’s giveaways as a clear violation of “tied house’’ rules, measures put in place at the end of Prohibition to prevent large breweries from dominating local bars and incentivizing overconsumption of alcohol.

“This is a textbook tied-house case,’’ Mahony said. “Imagine if a retailer has been asked to decide whether to carry and sell a product from a small brewer, which cannot provide this equipment, or . . . from the world’s largest brewer, who can supply the refrigeration equipment.’’

The lack of clarity around pay-to-play is one issue expected to be addressed by an official task force studying potential reforms to the state’s Byzantine alcohol laws.

PREVIOUS ARTICLE
Article 73 of 155
NEXT ARTICLE