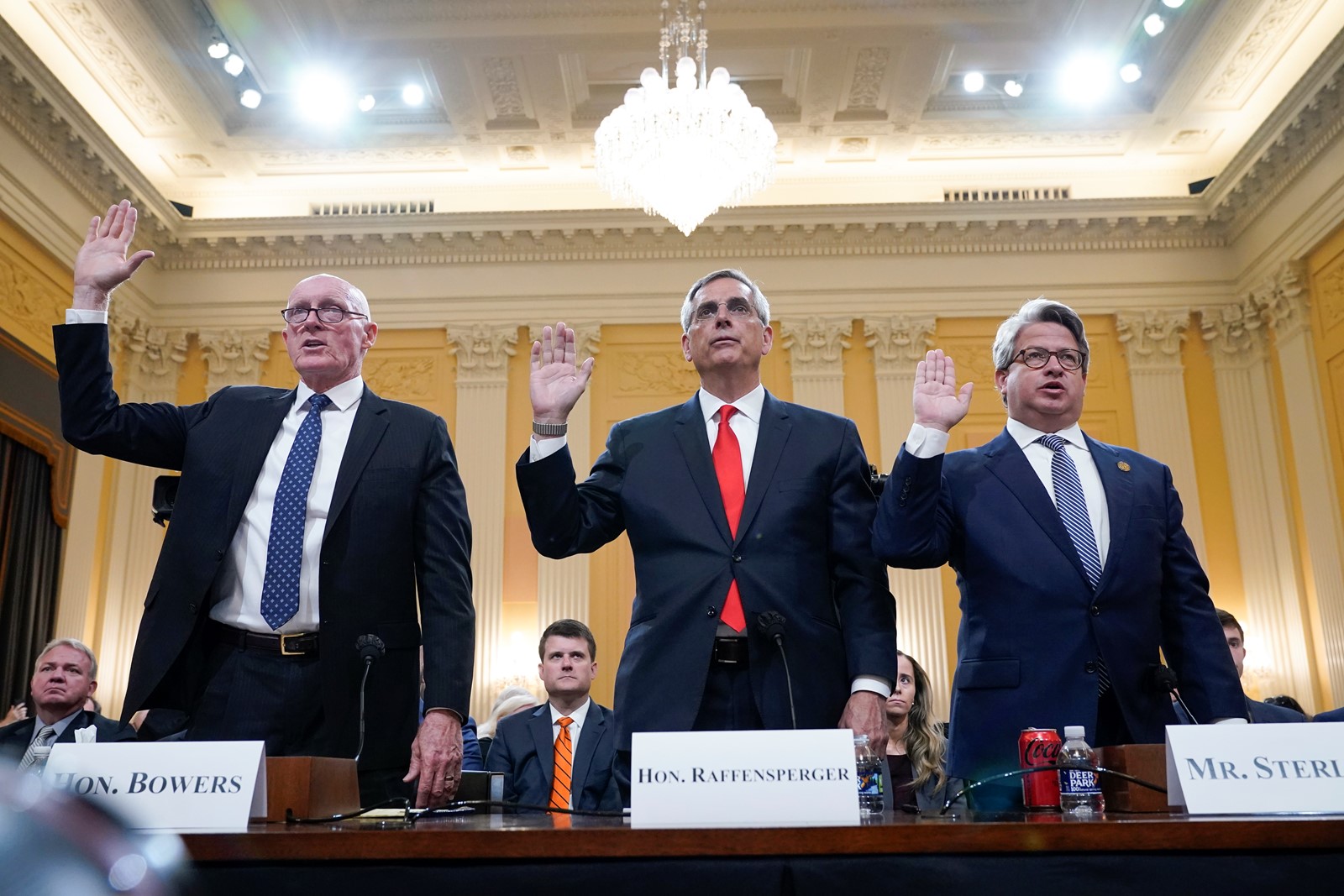 Republican state legislators and elected officials detailed Tuesday the intense pressure they faced from President Donald Trump and his lawyers to subvert the will of voters and to persuade lawmakers to submit false slates of electors backing him to Congress.

Arizona House Speaker Rusty Bowers, Georgia Secretary of State Brad Raffensperger and his deputy Gabriel Sterling, all Republicans, testified at the fourth hearing of the House select committee investigating Jan. 6, 2021, about the actions of Trump and those in his inner circle,

Wandrea ArShaye “Shaye” Moss, a former Georgia election worker, gave a wrenching account of racist death threats she and her mother faced after being accused by Trump of processing fraudulent ballots.

“It’s turned my life upside down,” Moss told the committee. “I don’t want anyone knowing my name.”

The second part of the hearing focused on the vitriol directed toward Moss and her mother, Ruby Freeman. They were attacked by name by Trump and Rudy Giuliani, who falsely claimed that video had captured the women using a USB thumb drive to change votes.

“What was your mom actually handing you in that video?” Rep. Adam B. Schiff, D-Burbank, asked.

Bowers testified about the calls he received from Trump and conservative California lawyer John Eastman, and about a meeting with Trump attorney Giuliani in which the former New York City mayor asked him to overturn the state election results after Joe Biden won and instead submit a slate of electors for Trump.

Bowers said Giuliani pointed out in multiple phone calls that they were both Republicans and said that Bowers had legal authority in Arizona to remove Biden electors and replace them. Giuliani asked Bowers for a committee hearing to do that, and Bowers said he didn’t have such authority. He said Giuliani never provided proof supporting his allegations of fraud in the state’s elections, which included allegations that hundreds of thousands of immigrants in the country illegally had voted in the election.

Bowers said he was never given evidence of fraud in Arizona’s election.

“We got lots of theories, we just don’t have the evidence,” Bowers said Giuliani told him.

When Giuliani continued to press him, Bowers told the president’s attorney that he was “asking me to do something that is counter to my oath when I swore it to the Constitution to uphold it, and I also swore to the Constitution and the laws of the state of Arizona.”

“I will not break my oath,” Bowers said, adding that “it is a tenet of my faith that the Constitution is divinely inspired.”

The committee showed a video detailing how Trump’s plan depended on legislatures in multiple states adopting alternate electors. The then-president leaned heavily on state and local officials to take action while his team of lawyers, including Eastman and Giuliani, relied on conspiracy theories to back the push. State Republican leaders, Trump campaign lawyers and even the Republican National Committee were asked to persuade people to sign certificates to legitimize the false electors backing the president.

“We were useful idiots, or rubes,” Robert Sinners, a former Trump aide, said of pushing the phony elector scheme in Georgia. He told Jan. 6 investigators he’s now “angry” he was misled.

“No one really cared if people were potentially putting themselves in jeopardy,” Sinners said.

The committee also played a clip of a deposition from RNC Chair Ronna McDaniel, who indicated that Trump called her and connected her to Eastman to help coordinate false slates of electors.

“The campaign took the lead and we just were helping them in that role,” she said.

The committee also showed a text message from an aide for Wisconsin Republican Sen. Ron Johnson to an aide for Vice President Mike Pence asking if he could physically hand a copy of the fake electors certificates from Michigan and Wisconsin to the vice president about 20 minutes before he presided over the electoral vote count on Jan. 6, 2021. Johnson’s spokeswoman tweeted during the hearing that the senator wasn’t involved in the creation of the certificates and didn’t know they were going to be brought to his office.

Bowers said when he learned that a false slate of electors from Arizona had sent fake ballots to Washington, D.C., he thought of the book “The Gang That Couldn’t Shoot Straight” by Jimmy Breslin.

“This is a tragic parody,” he said.

Raffensperger was on the receiving end of Trump’s Jan. 2 request to help overturn Biden’s win, in which Trump told him to “find 11,780 votes, which is one more than we have because we won the state.”

Schiff said that White House chief of staff Mark Meadows texted or called Raffensperger’s office 18 times to set up that call with Trump.

“We didn’t have any votes to find,” Raffensperger told the committee. “The numbers are the numbers and numbers don’t lie.”

The Justice Department is also examining the fake electors scheme, as are prosecutors in Georgia.

PREVIOUS ARTICLE
Article 3 of 168
NEXT ARTICLE