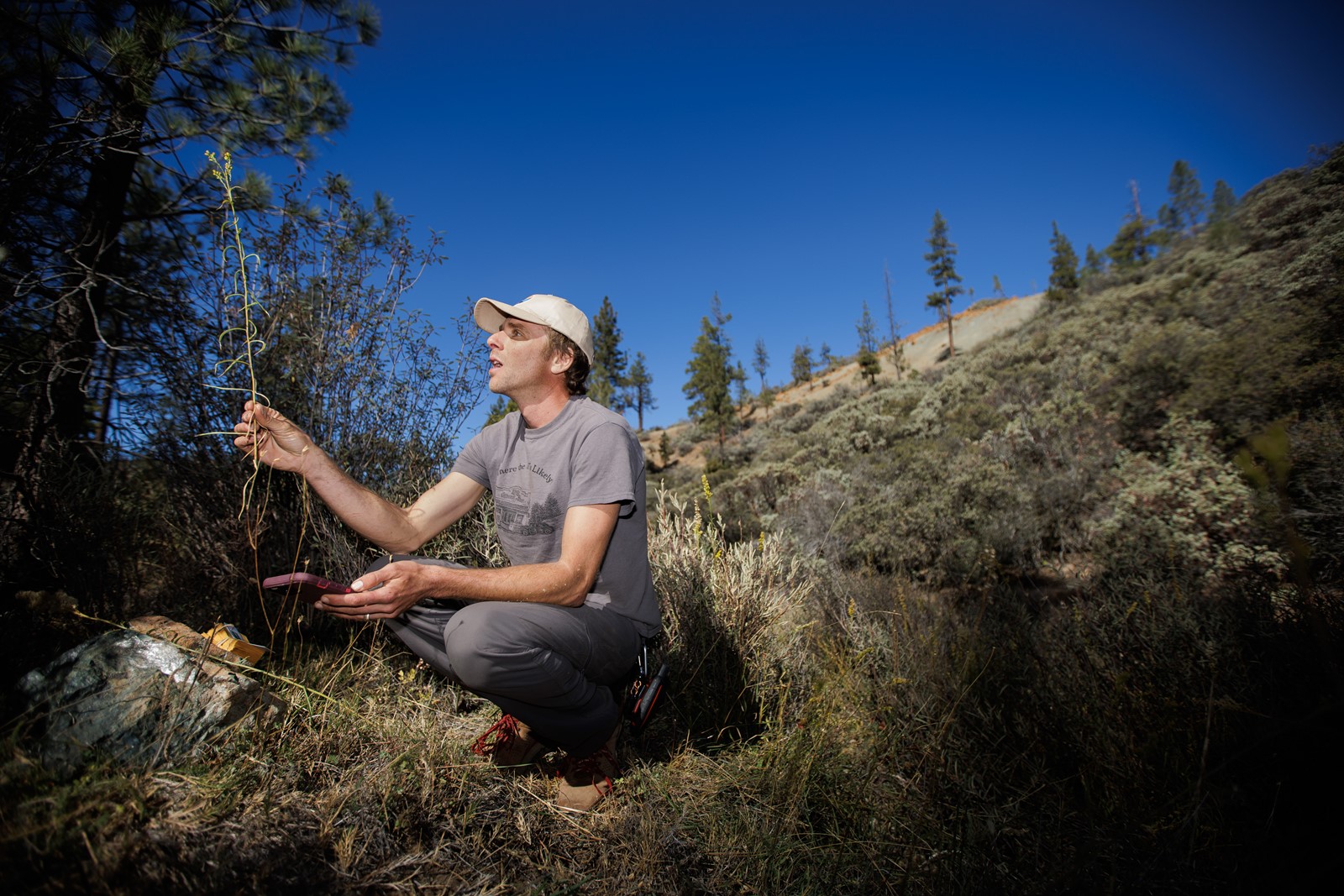 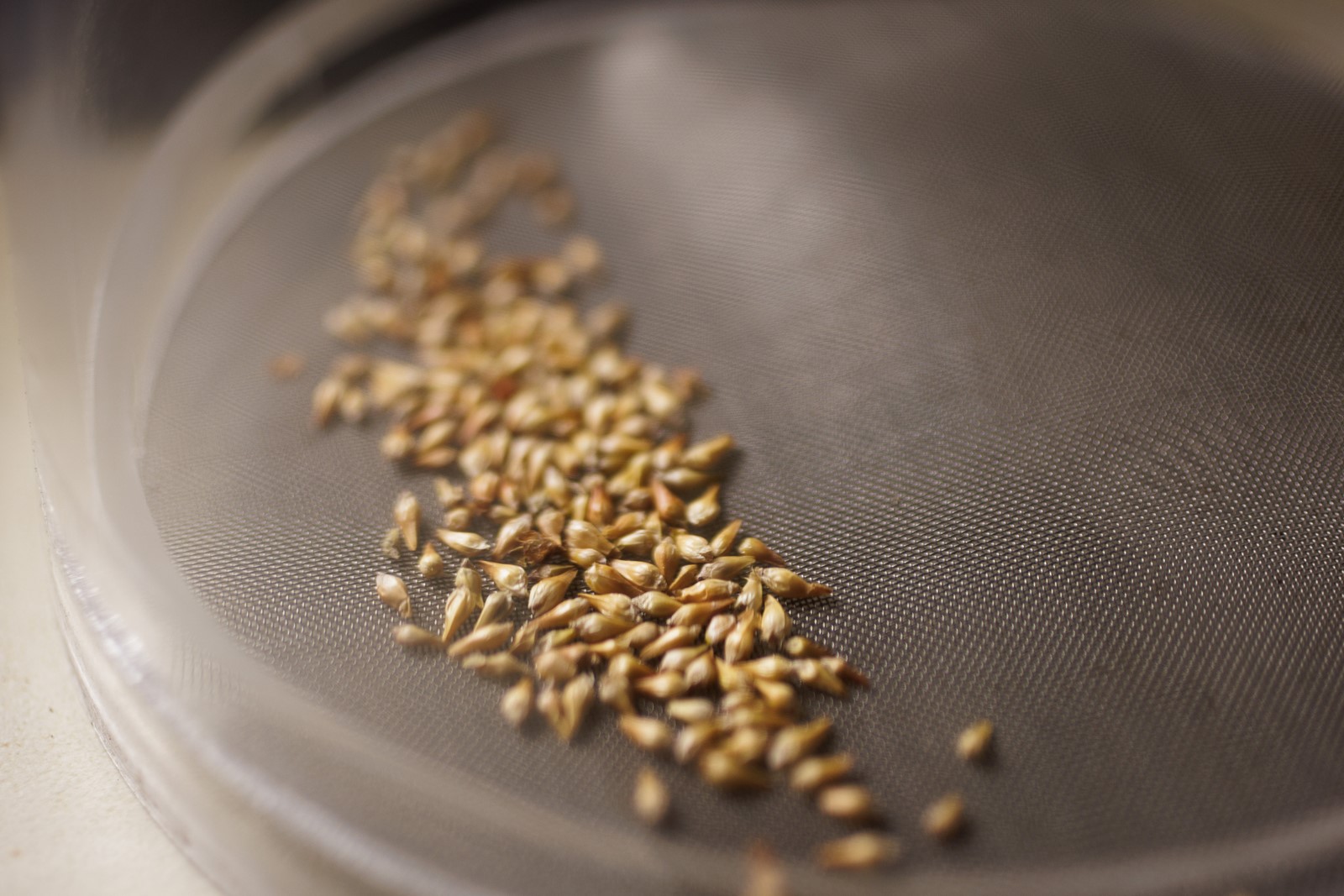 Seeds from a rare variety of sulphur buckwheat are shown during a demonstration of how the rare plant’s seeds are processed and stored at the UC Santa Cruz Arboretum. 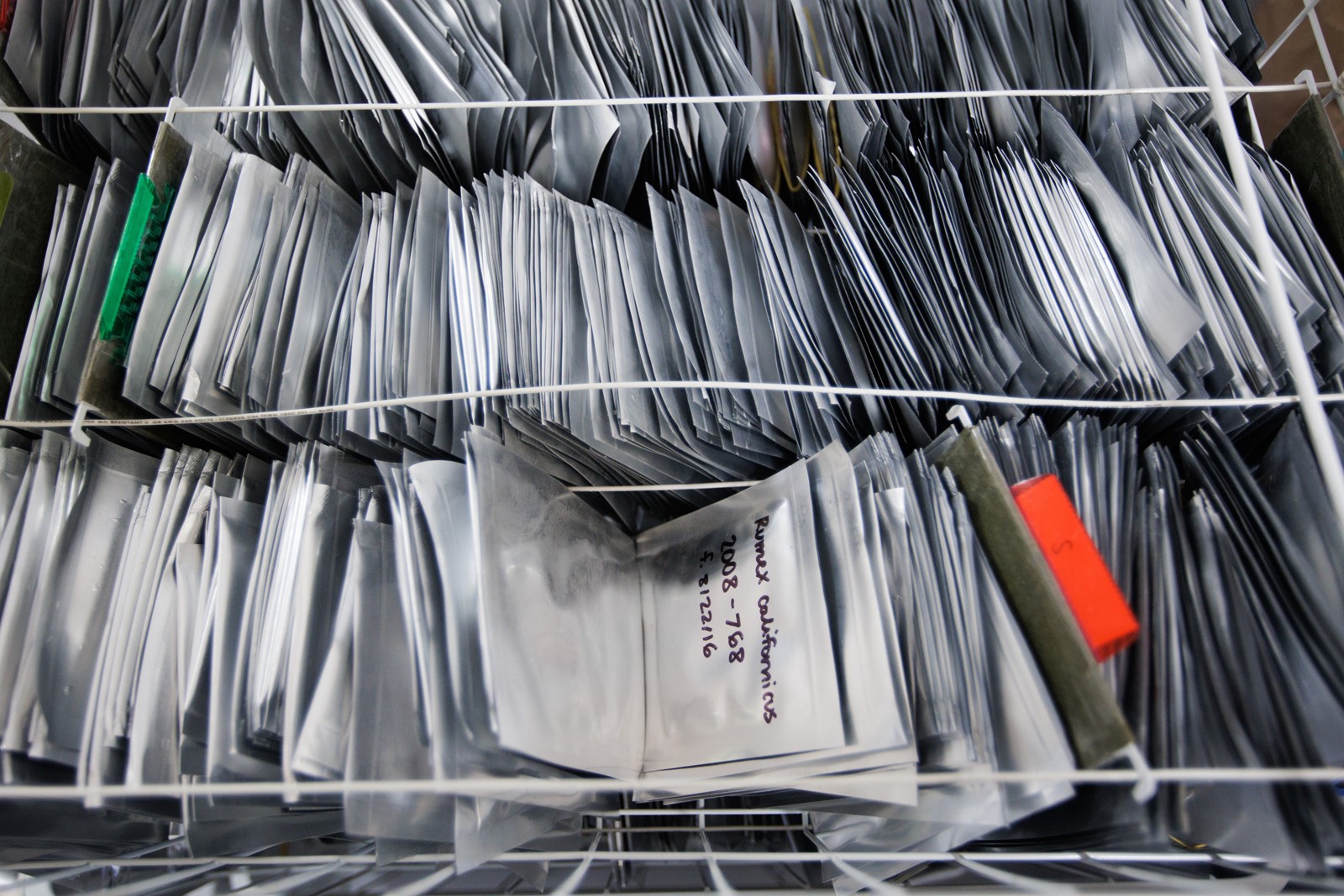 Rare plants’ seeds are stored at minus-10 degrees in a freezer at the UC Santa Cruz Arboretum.

On a cool autumn morning, deep in the rugged backcountry of San Benito County, Alex Hubner bounces over boulders in his Toyota Tacoma truck, eyeing each passing plant like a bounty hunter seeking prey.

He stops suddenly beside a lonely gray-green lump, its roots gripping the inhospitable serpentine soil like skeletal fingers.

Crouching over the plant, Hubner takes a closer look. It’s a rare variety of sulfur buckwheat — past its prime, seeds scattered.

“When you’re late, you can end up with a whole lot of nothing,” he said, probing the dirt in disappointment.

Then he’s off in search of others.

Based at UC Santa Cruz, Hubner and his wife, Lucy Ferneyhough, are collectors for California Plant Rescue, a state-funded consortium of botanical institutions that aims to find and conserve the botanical diversity of the Golden State.

With species disappearing at an alarming rate, the couple’s efforts help California Plant Rescue build a network of plant banks to store seeds and sprouts, each a modern-day Noah’s Ark that could help protect against the permanent loss of rich, unique and irreplaceable lives.

California Plant Rescue has achieved remarkable success. Since its founding in 2014, its members have collected seeds from 78% of California’s 1,166 rare, threatened or endangered plant species, according to Katie Heineman of the Escondido-based Center for Plant Conservation, which sponsors the effort.An infusion of $3.6 million in state funding is boosting efforts to collect and preserve the remaining species. Prior to state support, the group banked only about 35 species a year. Now it’s averaging 131 species a year.

“These plants are part of our heritage and part of the biodiversity of the planet. Things can blink out at any point,” said Brett Hall, who directs UC Santa Cruz’s effort. “Having them safeguarded is hedge-betting for their futures.”

UC Santa Cruz’s Native Plant Program is a leader in the effort. Based at the university’s Arboretum, this year the program saved 50,000 seeds. It has a total of 375 collections, representing 206 different species. Each specimen is stored in a small foil envelope in a chest freezer that is maintained at minus-10 degrees, cold enough for seeds to stay viable for years, perhaps decades.

The plight of plants can get lost among the dramatic tales of endangered mammals or birds, say ecologists.

And, at first, each loss makes little difference. When one tiny plant goes extinct, our world isn’t radically changed. But over time, like an airplane losing its rivets, the ecosystem will crash, warn scientists.

“We’re only beginning to understand these webs of interconnectedness,” said Hubner. “The web seems resilient. But when you start removing too many strands out of the web, down it goes.”

Until recently, collectors have favored the scenic and easy spots. The remote and rougher parts of the state — especially the interior central coast, with both the highest concentration of endemic plant species and imperiled plant species in the U.S. — are underrepresented.

Hubner, 36, and Ferneyhough, 32, are helping change that.

Restless, fit and focused, they came to UC Santa Cruz to follow their passion for native plants. While seeds are their focus, they may also take cuttings or, if the plant is abundant, bring it home to reproduce in the Arboretum’s nursery. The Arboretum’s Native Plant Program is paid $1,250 for each collection and another $1,250 for seed processing and preservation.

Poring over a computerized database of historical observations, they plan their routes. In a truck that is outfitted for spending days alone in the wilderness, they’ve traveled to Modoc and Lassen counties, the Santa Lucia Mountains, the eastern slope of the Sierra Nevada and beyond.

“The entire state becomes like a game board,” he said. “You only have a certain amount of daylight and drinking water and gasoline and whatever else you need to get into these super deep remote places.”

Plants are not always where they’re supposed to be. Perhaps it’s been eaten by an animal, lost to wildfire or died by drought. And the timing is tricky. If found too early, its seeds aren’t ripe; if too late, they’ve dispersed.

Sleuths, they tracked down a rare coyote mint in the hills above Lompoc. They found a True’s mountain jewelflower in Tahoe National Forest, its only known site.

Nearly 9,000 feet up in Desolation Wilderness, on north-facing granite between two glacial lakes, they discovered the tiny Cup Lake draba.

In a landscape still hot, charred and smoky from wildfire in Mendocino National Forest, they spotted a moist green oasis. There, thriving, were clusters of elusive Klamath sedge.

They take no more than 10% of a plant’s seeds, leaving the rest for Mother Nature. Back home at the Arboretum, collection information is entered into a database. The seeds go straight into low-humidity dryers.

Seeds must be cleaned before storage to prevent infection by dangerous fungi. Sieves are used to separate the seed from the chaff. Then the seeds are tossed in a blower to remove fine debris.

Half of the collection stays at the Arboretum; the other half goes to a different seed bank for safekeeping. Horticulturalists may attempt germination.

November marks the waning of the collection season. With days getting colder and darker, plants are drawing down their energy for necessary rest.

But sulfur buckwheat is a late bloomer. Its tiny teardrop-shaped seeds ripen slowly, then drop.

It’s a hostile landscape, created by a long outcropping of serpentine rock with high concentrations of heavy metals and few essential nutrients. It still bears the scars of the California Gold Rush, when mercury was mined. Its canyons are rumored to have hid the famous bandit Joaquin Murrieta.

But it’s home to the rare sulfur buckwheat plant. Well-adapted, the plant thrives in this harsh environment, said Hubner.

Behind locked gates on an old wagon route, Hubner stops the truck. Then he scrambles ahead. There, in abundant clusters by the side of the road, is sulfur buckwheat.

“They’re not there until they are,” he said, triumphantly, filling envelopes with seeds.