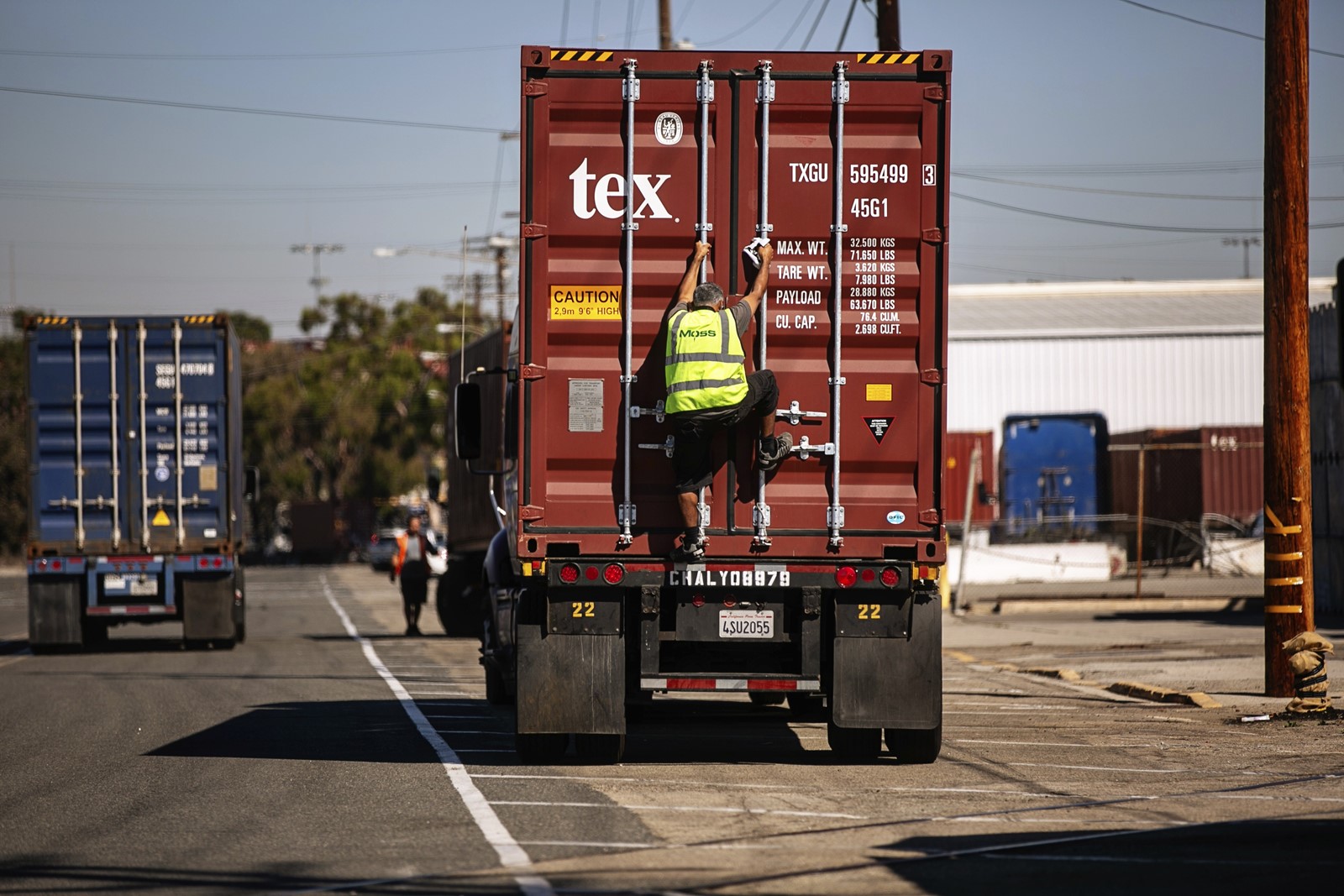 Few workers in America have a lousier reputation just now than truckers.

Since last fall, when an inflation spike first bubbled into public awareness, truck drivers have been blamed for contributing to logjams at the ports of Los Angeles and Long Beach, which account for 40% of the sea freight entering the U.S.

Drivers were blamed for not showing up for work in sufficient numbers to move backed-up cargo. The workplace rights they were granted by California law supposedly interfered with the free flow of goods, prompting shipping companies to ask Gov. Gavin Newsom, unsuccessfully, to suspend those rights for the duration of the supply-chain backlog.

Then came the truck driver blockades at important Canada-U.S. border crossings, some of which are still going on. Never mind that those blockades were aimed at protesting government COVID vaccination mandates that are supported by majorities in both countries. Never mind that the protests appear to be coordinated and financed by far-right activists in the U.S.

Here’s the truth: Truck drivers, notably the short-haul drivers who carry goods from the ports to regional warehouses or other transportation depots, are among the most abused workers in our economy.

They’re not the problem in the port backups. The problem is shipping companies that misclassify drivers as independent contractors despite consistent rulings over the years by judges and regulators that have determined they’re employees in all but name.

They don’t get retirement or healthcare coverage, or reimbursement for their work expenses. Typically, they work on 90-day renewable contracts, which means they can effectively be fired at will, with no recourse to the protection against arbitrary treatment enjoyed by employees. And under federal law, they’re not eligible to unionize — that’s a right afforded only to employees.

Truck drivers are in the news today chiefly because of the Canadian protests, but that’s irrelevant to the real issues American truckers face. Their work issues are older and more serious.

They’re workers like Domingo Avalos, 57. Avalos has been driving for 20 years, the last 10 for XPO Logistics, a major national shipping company with extensive operations at ports of Los Angeles and Long Beach.

Avalos told me through an interpreter that a normal workday for him stretches from 5 a.m. to 7 or 8 p.m., often without meal breaks. Of that time, five to six hours are spent waiting to be dispatched or for containers to be picked up or offloaded at the port, rail yards or warehouses.

“We don’t get paid until the truck starts moving,” he says. “We don’t qualify for overtime pay, we go without lunches or bathroom breaks. Supposedly we are very skilled workers, with a high amount of training to do this very important job. But the pay and the treatment are just not adding up.”

Avalos’ experience with XPO was covered in a case the Teamsters brought against XPO before the National Labor Relations Board in 2015.

Christine E. Dibble, the NLRB administrative law judge hearing the case, found in 2018 that the company had denied him an $18,000 loan to repair his truck; based on company communications entered into evidence, she concluded that the loan was denied because Avalos was involved in union organizing for the teamsters.

had been unable to work, but by the time her order was made final last year,

his truck had been repossessed.

According to an estimate by the National Employment Law Project, drivers designated as independent contractors earn nearly 20% less than those designated employees. In 2014, when

the estimate was developed from industry analyses and driver surveys, median pretax earnings were $35,000 for driver-employees, and $28,783 for “independent contractors.”

That year, according to the report, about two-thirds of the 75,000 port drivers nationwide were misclassified as independent contractors.

Given an average workweek of 59 hours, the larger sum works out to about $11.40 an hour, and the smaller sum about $9.40. In California, that wouldn’t qualify as minimum wage today.

A 2019 report by the UC Berkeley Labor Center found that about 30% of long-haul drivers were also potentially misclassified. There the divergence of income was also notable, with long-haul employee drivers earning a bit more than a median $53,000 in 2018, and contractors earning a median $44,520. Driver employment overall is about 1.75 million, according to

the Bureau of Labor Statistics.

We’ve written before about the injustices that truck drivers face in their work at the ports.

The vast majority of the roughly 14,000 regular truck drivers at the ports of Los Angeles and Long Beach are classified by their bosses as independent contractors. They have to shoulder the costs of operating and maintaining their vehicles, including repairs, tires, fuel and insurance.

Thanks to a state rule requiring low-emissions vehicles at the ports, many have had to borrow the $80,000 or so needed to purchase new trucks, often taking loans from the shipping companies. That arrangement, driver advocates say, makes them more subservient to the bosses and places them in such deep hock to the companies that some are in the red even after a full week of work.

They’re also vulnerable to systematic wage theft. Just last October, XPO agreed to pay $30 million to 784 drivers to settle federal court class-action lawsuits alleging that two subsidiaries had deliberately misclassified drivers as independent contractors and paid the drivers less-than-legal wages, failed to pay them for missed meal and rest periods, and failed to reimburse them for business expenses or for waiting-time penalties.

“We believe our classifications are legal,” XPO spokesman Joseph Checkler told me. He notes that under the settlement, the company denied all liability and wasn’t required to reclassify the drivers as employees.

The language is embodied in the text of a 2021 state law that makes shipping clients, including major retailers such as Target, Home Depot, Lowe’s and Walmart, jointly liable with many shipping companies for such things as unpaid wages and unreimbursed expenses owed to drivers.

The independent contractor versus employee debate has been a political shuttlecock for years. To some extent, it dates to 1980, when the trucking industry was deregulated and new companies — typically nonunion — flooded into the market.

The Obama-era NLRB significantly narrowed employers’ latitude to use the dodge. President Trump’s NLRB overturned that policy; and President Biden’s NLRB has signaled strongly that it is returning to the Obama rules.

The back-and-forth played out in the Teamsters’ 2015 case against XPO. In her 2018 ruling, Dibble took note of the 10 factors the board said should be considered in deciding an employee’s status and found that seven weighed in favor of finding that the drivers were employees.

Among them were that XPO exerted significant control over the drivers’ work, that the drivers were performing work central to XPO’s business, and that in most respects XPO unilaterally set drivers’ compensation.

The ruling was important because it effectively allowed the workers to unionize — independent contractors, unlike employees, aren’t entitled to the unionization rights embodied in federal law. The ruling covered about 130 drivers at XPO’s terminal in the City of Commerce, but as a blow against the misclassifications or employees as contractors, it was even more significant.

When Trump’s NLRB overturned the previous policy, Dibble was instructed to reconsider her 2018 ruling. She did so, and reaffirmed it.

In California, the 2019 law known as AB 5 significantly narrowed the circumstances under which workers could be classified as independent contractors rather than employees. Ride-share and delivery companies paid heavily in 2020 to pass Proposition 22, which exempted them from the rules, but trucking companies at the port were not covered.

That’s why shipping companies and other businesses asked Newsom to suspend AB 5 “until the supply chain has normalized.” Newsom didn’t bite.

What’s often overlooked is who pays the costs of misclassification by shipping companies.

“They’re making money off the backs of drivers,

off the taxpayers, off the high-road employers who follow the law,” says Julie Gutman Dickinson, a Los Angeles lawyer who has scored a string of courthouse victories over misclassifying companies over the years. Drivers are denied fair wages and job protections; taxpayers lose out on payroll taxes and get stuck with the costs of unemployment, disability services and workers’ compensation; and law-abiding employers have to compete with rivals operating on

Notwithstanding repeated rulings that drivers meet all the qualifications to be classified as employees, the shipping companies are still fighting ferociously to keep the independent contractor dodge alive. XPO has asked the NLRB to reject a petition by the Teamsters to represent about 250 drivers in San Diego and Commerce, on the grounds that they’re not employees. The case is being heard by an NLRB administrative law judge in Los Angeles.

“We think the evidence will show that XPO Cartage properly classifies the owner-operators and independent contractors with whom it contracts,” Checkler says.

The tide may be turning, however. The recent XPO settlement hints at the costs that noncompliant companies may face. California laws making clients liable for their shipping firms’ violations may prompt them to place pressure on the firms to comply. The Biden-era NLRB appears inclined to implement a joint-liability standard.

“Misclassification has been a pervasive problem for years and years,” Dickinson says. “Now it’s reaching a tipping point.”