Coronavirus leads to hunger in Mexico 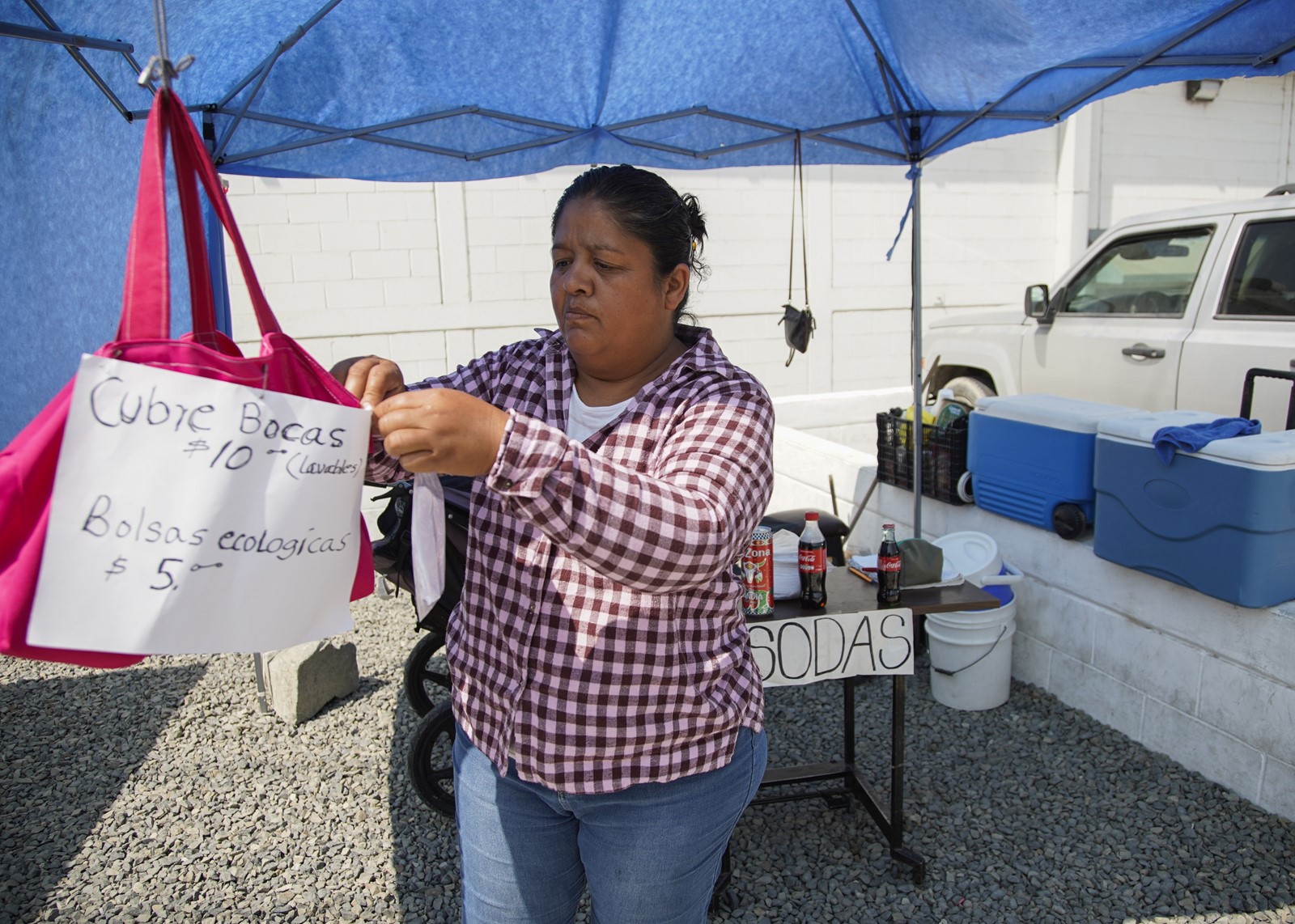 Seven days a week, Karina Amaya Salamanca gets up at dawn to set up a tent along a busy highway on the southern outskirts of Tijuana.

From there, she sells cold sodas and hot coffee, earning about $14 a day on good days and less than $5 a day on the less busy ones.

The work is a far departure from the factory job she held before the China-based company was forced to close under coronavirus restrictions. But the 42-year-old single mother of two is in survival mode now.

“Some days, we go without food,” Amaya said casually, slowly rocking her neighbor’s 9-month-old baby in a stroller. She watches the infant for extra income while she sells refreshments from her tent. Her own children are 19 and 21.

The food she can afford often isn’t the healthiest.

“We’re living day-to-day, so we have a little money to buy a little food that day, and that is maybe doing us harm,” she said.

Since the beginning of the pandemic, economists and health experts have warned about the inevitable secondary pandemic of poverty hitting struggling countries like Mexico, where 8.5 million people lived on less than $2 a day before the economic recession caused by COVID-19.

Those living south of the border don’t have access to the same safety nets that keep U.S. families afloat, such as stimulus recovery checks, rent control or food stamps.

Mexico also has no federal unemployment insurance, leaving workers such as Amaya at the mercy of nonprofits, the kindness of neighbors and her own entrepreneurship. She has been unable to find new work in the factories, which are among the higher paying jobs for hourly employees.

“They do health exams at the door and if you’re a little older or if you have high blood pressure or if you are a little chubby, they won’t hire you,” she said on Friday.

Adding to the current food insecurity is the recent temporary shutdown of the city’s food banks, a victim of what has been characterized as a political showdown between the Tijuana mayor and the Baja California governor.

As the pandemic upends food supply chains, the growing number of people living in Baja California with hunger or food insecurity is beginning to show.

Long lines stretch outside nonprofit soup kitchens, while uniformed construction workers jump fences after work to forage fruit off guava trees. The issue has been compounded by a slow-down in cross-border philanthropy, a lack of governmental assistance and concerns that crowded food lines could further the spread of the virus.

“The highest need that we have right now in the region of Baja California is food security, which is food access or access to fresh food,” said Arden Martinez, who lives in Tijuana and works for the nonprofit International Community Foundation, or ICF.

As much as 40 percent of the Baja California population currently lacks access to fresh and healthy food, according to ICF. That figure is up from approximately 15 percent before the pandemic began.

Outside Padre Chava, another nonprofit in the city’s northern region, large crowds gathered Friday before breakfast was served.

“For almost everyone in this line, this is the only meal they’ll get all day,” said Luis Gonzalez Hernandez, 55, a volunteer at the soup kitchen. “We’re seeing a daily increase of people in need of anywhere between 20 to 50 percent, depending on the day.”

The organization is among nearly a dozen receiving funds from ICF through some $100,000 in grants donated by local companies and fundraised through local initiatives, but it’s not enough to fill the need.

“We will never have enough money to solve all the issues,” said Leticia Martínez, a senior development officer with ICF.

Local nonprofits say a lack of government assistance is contributing to the malnutrition. Some have complained that the Baja California government is putting up too many barriers that prevent nonprofits from serving food because local health officials worry the gathering of people will further the spread of COVID-19.

Both the nonprofits and residents complain the government is not stepping-up to fill that need.

“There is no social safety net,” said Martínez. “There’s nothing. The nonprofits are the ones doing the work right now.”

“That’s what they need more than a canned food,” said Arden Martínez, who works as a border food security intern for ICF. She pointed to local organizations like Padra Chava, Instituto Madre Asunta, UNICEF, Casa del Migrante and others. “The organizations themselves, they know better than we know how to allocate funds and how to get the fresh foods they need.”

Cross Border Xpress, or CBX, the company that runs the bridge between the Tijuana International Airport and the United States, just contributed $25,000 for ICF to distribute among such organizations. Jorge Goytortua, the chief operating officer of CBX, said some of the donations were raised from travelers who gave money in the airport terminal.

The need for cash was echoed this past week by the director of the Tijuana city department that distributes food, which is known as the DIF.

“We appreciate all the different kinds of donations we receive, but we do have families with needs that we can help fill with monetary donations by buying them something they need in particular,” said DIF Director Magdalena Bautista, during a news conference on Friday.

A U.S. donation of expired candy caused the closure this week of city food distribution centers this past week.

State health department inspectors shuttered Tijuana’s city-run food pantries after discovering a batch of expired sweets in one of its food storage warehouses. The closure leaves the city unable to deliver food to low-income residents, potentially worsening what some experts have described as a rapidly developing hunger crisis.

“The truth is that I am going out to these neighborhoods myself and seeing with my own eyes people who need food and they need medical care,” said Bautista. “They should not be having to pay for this situation. Right now, we have 2,000 bags of food that are golden that we cannot deliver because the warehouse is suspended.”

Bautista said the “dispensas,” or bags of food the city distributes, was never going to include the candy, which the DIF had planned on throwing out but had not yet had time to sort through because of a mountain of in-kind donations like canned food and other nonperishables.

Mayor Arturo González Cruz said the state health department inspections were initiated because of an ongoing political feud between himself and Baja California Gov. Jaime Bonilla. González, who belongs to the same political party as the governor, is polling the strongest among the potential candidates to replace Bonilla, but is apparently not his favored successor.

“It was a trap,” said González. “To stop the work we’re doing in the Tijuana government.”

Bonilla has not responded publicly to the accusation, nor did he respond to questions Saturday from the Union-Tribune.

That business is owned by the brother of the director of the state health department, who inspected and shut down the food pantries because of the same expired sweets his own brother donated, according to city officials and officials with the DIF.

The owner of Sweet World did not respond to a request for comment made Friday.