Why 20 years later, the landmark event continues to be the best of its kind. 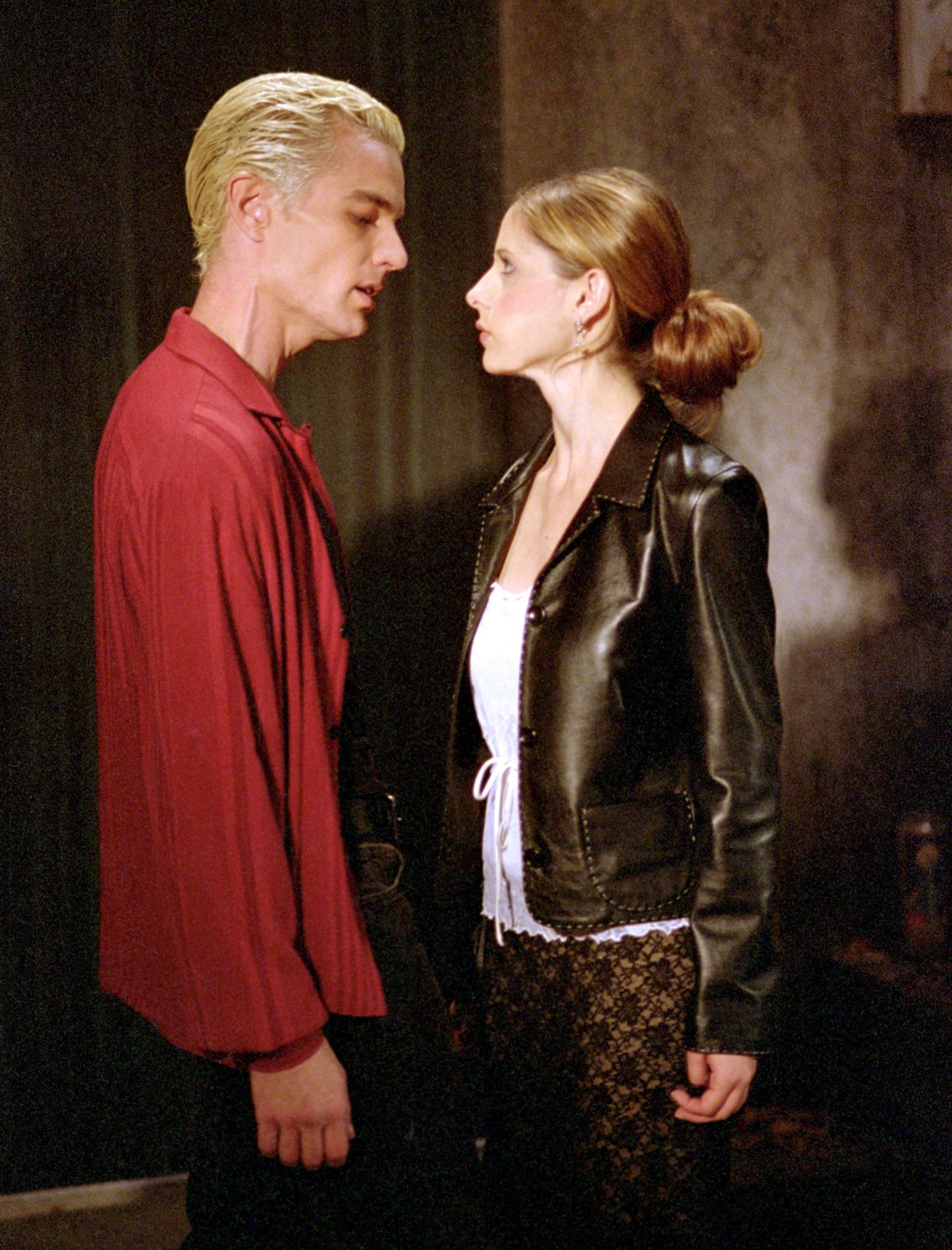 Twenty years ago this week, “Buffy the Vampire Slayer” aired “Once More, With Feeling,” an all-out musical episode that many (including us) believe to be the best ever made.

The passage of time hasn’t diminished the Season 6 entry’s bold artistic statement, either — even if the reputation of its writer-director, “Buffy” creator Joss Whedon, has been tarnished by allegations of on-set misconduct. So in honor of the episode’s anniversary, The Times’ resident musical lovers and “Buffy” fans — Dawn Burkes, Tracy Brown, Ashley Lee and Jevon Phillips — gathered to discuss its momentous airing, standout scenes and legacy.

Ashley Lee: I can’t believe it’s been 20 years since this episode first aired! I must confess that, in those 20 years, I had never seen it, or any other episode of “Buffy.” Watching it for the first time the other day — the series is available to stream on Hulu and Amazon Prime Video — I was floored. This episode f— slaps. I am low-key pissed that I wasn’t allowed to watch this show as a kid because this would have radicalized me. What was it like for a devout “Buffy” fan to see this back then?

Jevon Phillips: Fans knew that Whedon had wanted to do a musical episode for a while. We knew Anthony Stewart Head, who plays Giles, and James Marsters, who plays Spike, could sing. We had heard glowing reviews of Amber Benson’s voice, so Tara was set too. But what about the rest of the cast?

Dawn Burkes: It really was a capital-E Event for “Buffy” fans. And it came during a time when people were still reeling from the show changing networks and well-loved characters changing too. “Where Do We Go From Here,” indeed. (And now I’m singing the entire soundtrack, of which I own a hard copy.)

Tracy Brown: It’s not hyperbole to say that I’ve probably seen “Once More, With Feeling” more times than any single episode — a tally mostly racked up when DVD boxed sets were the only way to revisit your favorite TV. This was before “Glee” or “Crazy Ex-Girlfriend,” so the only real frame of reference for “musical episode” I had at the time was, like, “Xena: Warrior Princess.” (“Bitter Suite” remains a favorite.) And itwent on to be shown in theaters for fan-driven, interactive sing-along events, at least for a while.

Burkes: The sheer musicality of this episode really, ahem, sang. One of my favorites was when “Standing in the Way” and “Under Your Spell” became a mashup with Tara and Giles. But the one for which I know ALL the lyrics and still sing them from my chest is Spike’s heartbreaking “Rest in Peace.” That song had so much meaning and emotion, propelling the story and helping anyone understand how — spoiler alert — Buffy (Sarah Michelle Gellar) could end the episode by doing much more than “whisper in a dead man’s ear.”

Brown: If I had to pick a favorite, I’d go with “Walk Through the Fire” — the number Buffy leads as she heads to take on the big bad — for how it captures everyone’s inner conflict building towards what you think you know is coming, plus the quippy quotable asides present even in song.

But the musical moment that brings me the most joy in the episode comes much earlier, when Anya (Emma Caulfield) breaks out into a short rock anthem. Her insistence that bunnies could be responsible for the mysterious musical mayhem has never failed to put a smile on my face.

Phillips: Hinton Battle’s demon Sweet was so smooth and soulful on “What You Feel,” both with Dawn (Michelle Trachtenberg) and at the end. He’s easily one of my top “Buffy” villains.

Lee: I adored “I’ll Never Tell,” in which Xander (Nicholas Brendon) and Anya have simultaneous inner monologues about their relationship issues while dancing like Fred Astaire and Ginger Rogers in pajamas. The number rivals the best of bittersweet bickering onstage, including “The Little Things You Do Together” from “Company,” “Therapy” from “Tick, Tick… Boom!” and “Take Me or Leave Me” from “Rent.”

Also, “Something to Sing About” is a killer 11 o’clock number: the insightful lyrics about life’s meaning, the dance breaks with Caulfield and Trachtenberg, and the haunting way Gellar’s sweet voice swells into those minor notes and gets teary during the big reveal. Sorry, but there’s no other way to say it: Gellar slayed that song.

Brown: Gellar slayed the whole episode. Let’s remember that this was on broadcast TV, when full seasons generally ran 22 episodes or so, and they didn’t get extra time to film the episode. She recognized how pivotal the episode was for Buffy’s story that season and took on the challenge of learning all the songs and choreography and performed the numbers herself. It’s not like they could have featured less Buffy in that episode, and I don’t think the emotions would have packed as much of a punch had a voice double done the singing for her.

Lee: It fascinates me that this entire experiment wasn’t framed as a 50-minute dream sequence, hallucination or alternate universe, like many musical episodes that have aired since this one. Instead, there’s a self-awareness about suddenly breaking out into song that sell the “rules” of the episode’s storytelling. I howled when Anya asked of Spike’s song, “Would you say it was a breakaway pop hit or more of a book number?”

Burkes: That’s one of the main things I loved about “Once More, With Feeling.” It wasn’t just some throwaway musical episode so that the actors could pad their resumes or show off their Broadway chops, and the episode signaled that immediately. There was actual exposition and plot movement through song. It was darn near revolutionary.

Phillips: There were huge franchise-altering revelations mixed with little touches, like the dancing in the background of scenes and writer-producers David Fury and Noxon in featured singing roles. (Yes, many of us knew who they were or found out very quickly.) Buffy’s declaration at the end of her final song punched us all pretty hard. I just remember thinking: “There’s so much story packed into this one episode!”

Brown: Right? Besides the Buffy-centric revelations, what was significant for me was the turn Willow (Alyson Hannigan) and Tara’s relationship takes. This episode came at a time where queer representation on TV was basically nonexistent, so every little thing that happened between them on “Buffy” was one that I’d cling to. “Once More, With Feeling” had a magical (G-rated) lesbian sex scene, on network TV, and it blew my mind. At the same time, Willow had done something completely unforgivable and it was tough as a viewer to sit with that.

Lee: As more TV shows try out musical episodes, what do you think those showrunners could learn from looking back at “Once More, With Feeling?”

Phillips: The integration of plot is one of the reasons, if not the biggest reason, that the episode works. One of the more underrated fantasy shows of the past 10 years or so is “The Magicians.” The Syfy series had a few songs here and there, but there was one episode in Season 4 called “All That Hard, Glossy Armor” in which Margo (Summer Bishil), who delivers some of the most wicked curses and insults ever on TV, is hallucinating. The Pretenders’ “Don’t Get Me Wrong,” Whitesnake’s “Here I Go Again,” Roy Orbison’s “Beautiful Dreamer” and Gnarls Barkley’s “Storm Coming” are all on the playlist. It was fun and self-referential, and it wasn’t a one-shot episode that didn’t tie in with the plot overall.

Burkes: Episodic television has delivered some good stuff: Listen to the musical exchange between “Supergirl” and “Flash” — “Glee” alums Melissa Benoist and Grant Gustin — with “Rent” legend Jesse L. Martin as a singer on another Earth. See also “Lucifer’s” songs (and dances) in several episodes, most notably the full musical of “Bloody Celestial Karaoke Jam” in its last season. And anything Amber Riley sang on “Glee,” especially “Bust Your Windows.” Now that thickened a plot.

Lee: After watching “Once More, With Feeling,” I’d love to see more shows trying their hand at incorporating original music, rather than covering existing songs. While the latter is its own art form, lyrics written specifically for these characters allow the episode to outlive the popularity of the soon-to-be-overplayed song of the moment and are essential to making the aforementioned plot developments possible.

Burkes: One need only look at the Seth MacFarlane empire, specifically “American Dad” and “The Cleveland Show,” to hear the echoes of “Once More, With Feeling.” As “Buffy” did, those shows trusted that their viewers were smart enough to follow an original song that would actually take them somewhere. Who knows their characters better than the creators do?

Brown: Shout-out to fellow Fox animation series “Bob’s Burgers” and its masterful original songs. Even “The Simpsons” went full musical in its season premiere this year — original songs and all — with an episode about Marge’s past as a high school stage manager.

And “Steven Universe” is in a league of its own. The show was already known for the quantity and quality of its original music and how it was incorporated into its storytelling before it used a full musical episode as a trial run for making a musical movie.

Lee: You’re both so right. Even though we’ve since gotten so many live-action TV shows that are all about the original music — including “Smash,” “Nashville,” “Empire,” “Galavant” and “Schmigadoon!” — animation has remained a consistent high note for the form. My favorite one lately is Apple TV+'s animated “Central Park,” from Josh Gad and “Bob’s Burgers” vets Loren Bouchard and Nora Smith.

Brown: The one to check out now is “Centaurworld,” a show about magical centaurs, voiced by a cast that includes Broadway talent. It’s an original episodic musical rather than a show that just includes a lot of songs. That’s the soundtrack I have on repeat right now.

Live-action shows could learn a lot from how “Once More, With Feeling” and animated shows incorporate musical interludes. I’m all for moving beyond “staging a musical” or “it was a dream/hallucination all along” or even “villain traps us in a musical” (as much as I love it). You don’t always need a reason. Just let it happen!

Burkes: Creators seem to think you have to be comedic, even silly, when it comes to incorporating music. But it helps soften the blow of drama: ABC’s “Queens” showcases originals and in its first episode, there’s a significant plot point in the middle of a song. Will it continue in that way? One can only hope.