Scandal still reverberates at prep school
At Phillips Exeter, more calls arise for it to come clean about a history of sexual abuse 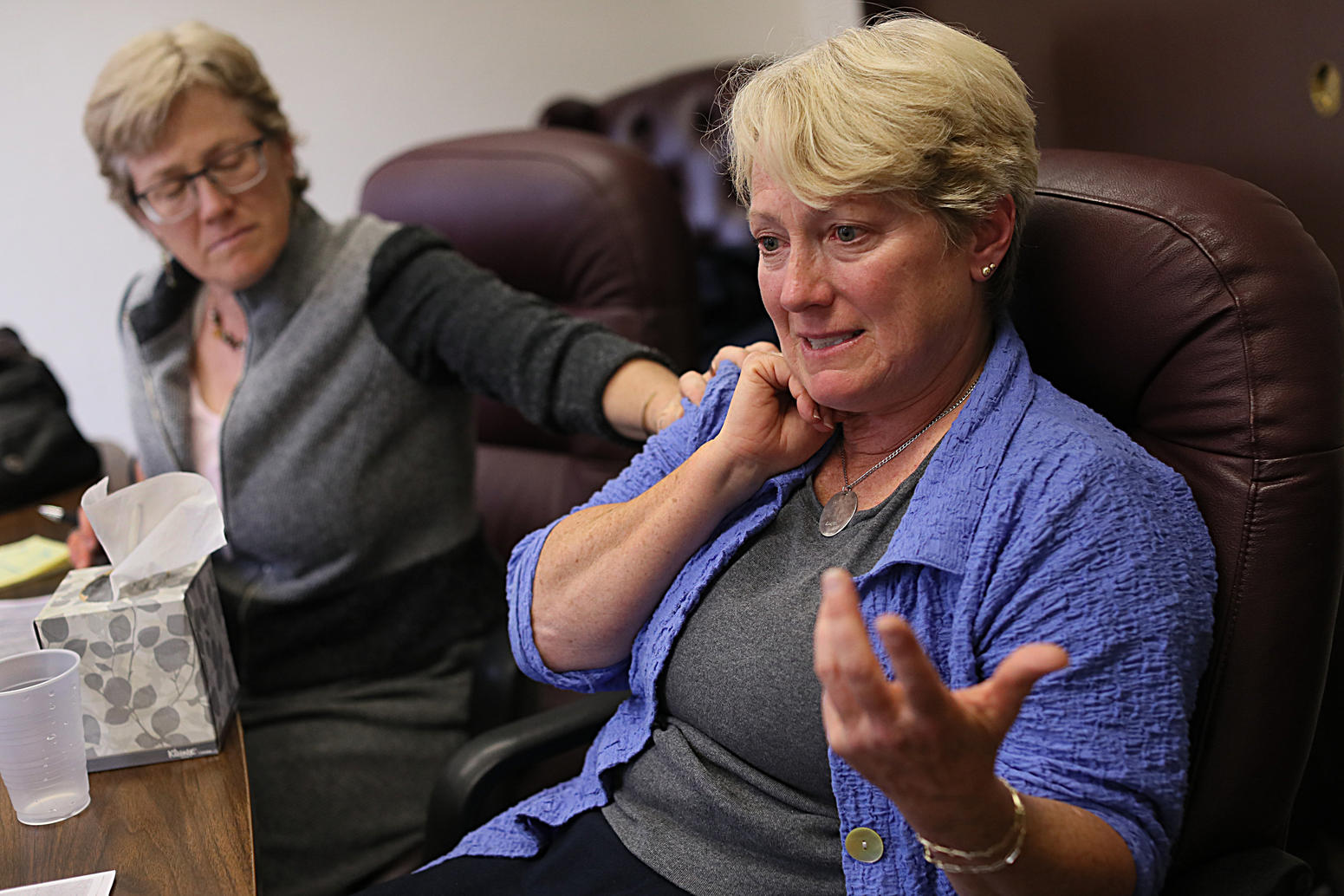 Cecilia Morgan (right) and her twin sister, Maria Morgan, say the school’s policies fall short. Cecilia was abused by a faculty member. Phillips Exeter Academy in Exeter, N.H., has been dealing with fallout since the Globe’s Spotlight Team reported on sexual misconduct in March.

Phillips Exeter Academy, renowned for more than two centuries as an intellectual oasis nestled in a sleepy New Hampshire town, may have hoped that the scandal over its coverup of a teacher’s sexual misconduct would die down and it could retreat to a quiet corner of the prep school world.

But that hasn’t happened. Almost from the moment in March that the Globe’s Spotlight Team reported on Rick Schubart’s sexual exploitation of two students, Exeter has periodically been convulsed by a cascade of revelations that now include:

■ Two of Schubart’s victims from decades ago are coming forward for the first time by name to demand that Exeter come clean about its history of downplaying sexual abuse. They want the academy to provide students with independent therapists trained in sexual misconduct, and to better monitor relationships between faculty and students.

■ A judge recently ordered the academy to reinstate a teenager accused of sexual misconduct because the school had not followed its own disciplinary rules. The boy’s lawyers had accused the institution of overreacting after Exeter was criticized for bungling other misconduct cases. The academy is heading back to court in January to fight the order.

■ A tragic suicide of a student who was sexually harassed and allegedly assaulted on campus in 2014 is now raising questions among friends and classmates about why Exeter didn’t do more to protect her. The unresolved issues are fueling some to withhold donations from Phillips Exeter.

“There do not need to be any more wake-up calls,’’ said Zoha Qamar, a friend of the victim and an Exeter alumna who helped lead the “Do Better Exeter’’ donation boycott campaign this summer. “Administrators need to get their house in order. We are here to apply pressure to hold administrators accountable since they are demonstrating a chronic inability to do that themselves.’’

Exeter principal Lisa MacFarlane, who took over in 2015, has apologized for the school’s shortcomings and has promised to dedicate more resources to addressing sexual misconduct, including hiring a director of well-being and increasing training for faculty and students.

“We continue to build in this area and know there is still work to be done to improve the culture on campus and the students’ faith in the Academy’s response,’’ MacFarlane said in a statement to the Globe.

The federal lawsuit that went to trial in November stemmed from a sexual misconduct case involving two 15-year-old students earlier this year. After the girl and her parents raised concerns about the encounter to administrators, Exeter hired an attorney to investigate. In the school’s court filings, Exeter said there was evidence the boy made “repeated, unwelcome sexual advances’’ and “engaged in at least one act of unwanted, factually non-consensual contact.’’ The boy later claimed that she initiated sexual contact and he felt pressured by her.

Exeter first placed the boy on leave and then expelled the teenager without allowing him to have his case heard before the school’s disciplinary committee, as outlined in the academy’s handbook. A judge temporarily reinstated the boy to Exeter, despite problems the alleged victim faced with chants and catcalls from classmates, court records say.

Court records show that the school had attempted to quietly make the problem go away in August, when principal MacFarlane wrote an e-mail that promised the boy’s parents that Exeter officials would not inform other schools of the misconduct case if he voluntarily withdrew and “will do everything we can to assist him in his transition to another school.’’

When the boy refused, the school pushed him out, according to the complaint filed in the case.

It’s a similar approach that Exeter took in 2011 after school leaders learned that history teacher Rick Schubart had engaged in sexual misconduct with former student Beth Solowey in 1977. Exeter officials quietly forced the teacher to resign, but allowed him to continue his career in education, even winning a national leadership award the following year.

In 2015, another former student, Cecilia Morgan, accused Schubart of sexual abuse when he was her dorm parent and adviser in 1982. During her senior year, Morgan said, she informed the school therapist about his behavior and her twin sister confirmed she confided in her adviser, David Weber, at the time. Weber, who officially retired but still taught classes recently, told the Globe he did not recall the conversation. Nothing was done until decades later, when Morgan hired a lawyer and sought financial compensation. Exeter never told Morgan that it knew about Solowey, and the school forced Morgan to stay silent as part of her settlement.

Schubart, who did not return messages seeking comment, confessed to sexual misconduct with both students and was barred from campus and stripped of his emeritus status in 2015. (However, school officials said nothing publicly until the Globe inquired in March.)

Morgan and Solowey said they are breaking their silence because they want other victims — past and present — to feel comfortable coming forward to get the help they need. And they want Exeter to do right by its students.

The two women criticized the school’s ongoing investigation into sexual misconduct for its lack of transparency and urgency: Neither has been interviewed about her experiences. They said the school must disclose the full findings and create a culture in which students and faculty clearly understand the expectations and consequences of sexual misconduct.

“Exeter has really fallen short of what they promised and what they should be doing,’’ Morgan said. “It’s really painful.’’

It was only three years ago when several female students formed the Exeter Feminist Union as one of the few places on campus where they said they could freely talk about sexism, sexual violence, and women’s rights.

In early 2014, the group starting making waves by asking classmates to pose with signs about why they need feminism and posting them on a blog, PEA Needs Feminism. Some addressed sexual assault head-on: “I need feminism because several ‘no’s followed by silence do not equal a ‘yes.’ PRESSURE and INTIMIDATION do not equal consent.’’

Several students held signs covering their bare chests — a move that drew criticism and ridicule from some in the school community. One girl’s sign read: “I need feminism because what I wear should not be dictated by what distracts men.’’

That sophomore, a girl named Kaur who was in line to become a leader of the club, was unafraid of challenging critics and penned a column for the student newspaper to rebut misconceptions about the movement.

But Kaur’s confidence in feminism didn’t make her personal struggles any easier. She confided in several friends that a classmate had sexually assaulted her in his dorm room that spring.

When she ran out of his room, the other boys in the dorm allegedly clapped, and a rumor soon began spreading, according to several alumni who spoke directly with Kaur, including one who kept notes of the conversation. The Globe is identifying Kaur by her middle name to protect the family’s privacy.

Weeks after the incident and the Feminist Union controversy, the 16-year-old was one of several students bullied and sexually harassed on the app Yik Yak, which allows individuals in a certain location to make anonymous postings.

Roughly two days later, school officials e-mailed students, encouraging them to stop using Yik Yak, but few complied. Exeter asked the company to block the app, but it only covered a small part of campus and the harassment continued.

Kaur went sobbing to a student she dated, Jack Hirsch, “mumbling how she must be a ‘whore’ and a ‘feminist bitch’ because they were all saying it,’’ according to a paper published by Hirsch.

In an interview, Hirsch said Exeter should have provided support for the members of the feminist club who were bullied and done more to go after those responsible. “I was so upset with Exeter after that happened. They totally mishandled it,’’ he said. “Their effective lack of a response was as good as condoning the harassment.’’

At home in July 2014, Kaur deleted the feminist blog. Shortly after, she committed suicide.

One of her friends, Zoha Qamar, said she believes the suicide was connected to Kaur’s treatment at Exeter and the school’s culture. When Qamar returned to campus in the fall, she complained to dean of residential life AJ Cosgrove about the school’s ineffective response to Yik Yak, to no avail.

“It was so evident and frustrating,’’ Qamar said. “There was a death of a student who was severely bullied on campus and there seemed to be no acknowledgment of anything.’’

Exeter officials said they never knew about the alleged assault, giving the school no opportunity to respond. Kaur’s family declined to comment.

“Our community was heartbroken by [her] death,’’ MacFarlane said in a written response to the Globe. “We were aware of the anonymous Internet bullying and did everything we could to put a stop to it immediately.’’

But at the time, in fall 2014, Melissa Mischke, Exeter’s dean of students, insisted to the school’s board of trustees that the only kind of harassment on campus was on social media and “that they could not do much about that,’’ according to a message to alumni by a former trustee, Della Spring.

Spring, who declined to comment to the Globe, wrote: “It seems hard for me to believe that the adults on campus could be so oblivious.’’

“A lot of faculty aren’t even in touch with the sexual assault that happens on campus,’’ Kaur said weeks before her death in an interview with an Exeter graduate who was researching sexual assault. “I do think the school is trying to suppress this issue.’’