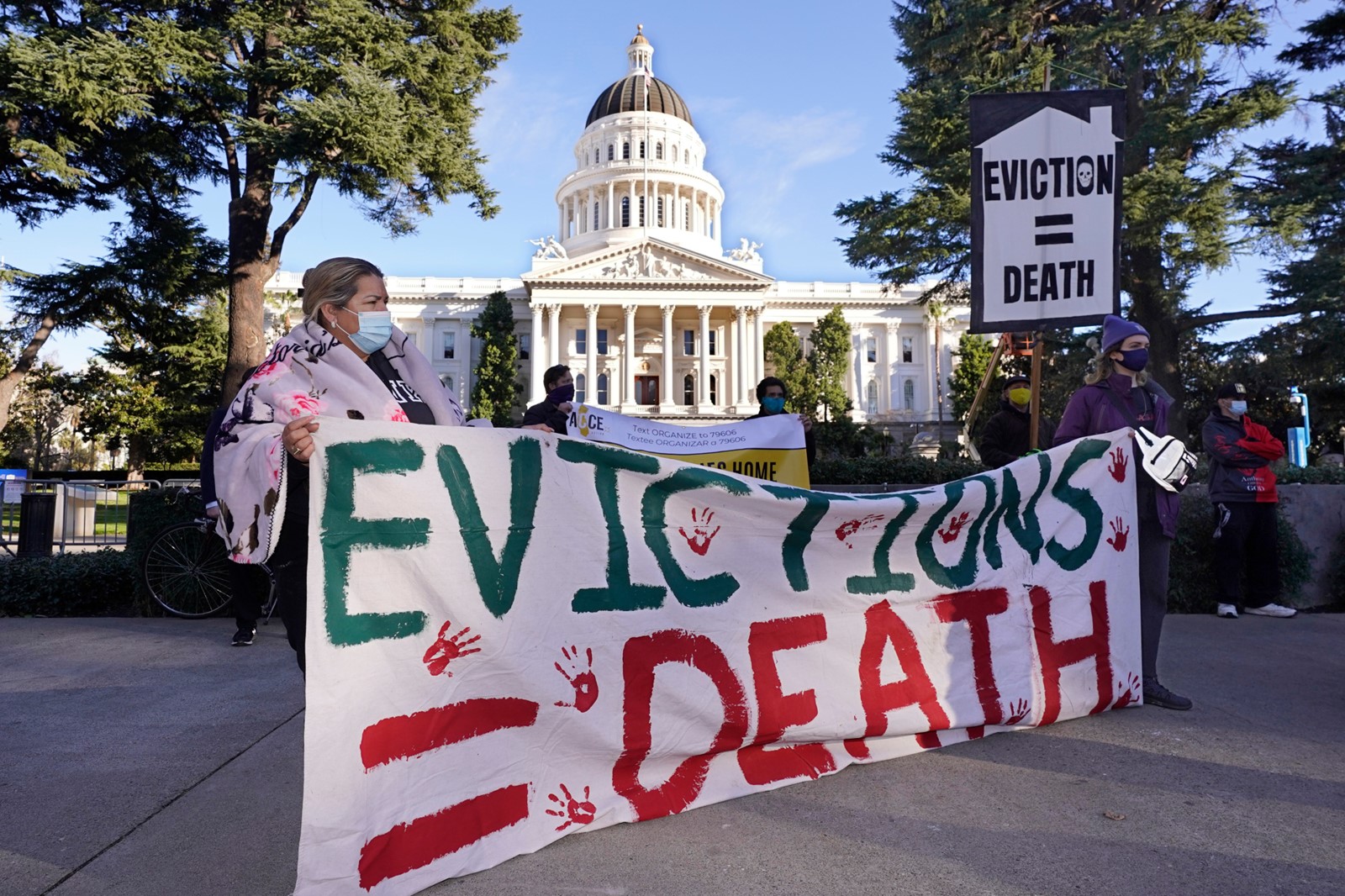 Protesters call on lawmakers to pass relief for renters Jan. 25 outside of the Capitol in Sacramento. Alameda County has been sued by the California Apartment Association to end its eviction moratorium.

The suit marks the latest step toward dismantling COVID-19 protections for tenants, as health risks have diminished and many state and local programs and efforts have expired.

The Alameda County moratorium, enacted in March 2020, is one of the few surviving protections in the state. It essentially bans all evictions, either for nonpayment or other reasons, to keep renters from being displaced during the health crisis. Los Angeles also has a moratorium in place, and has been sued by the local landlord association.

Alameda County landlords have felt stifled by the broad local protections, which have allowed some tenants to live rent-free even when they have not lost income or fallen ill to the virus.

“The county is open for business in every other way,” said Whitney Prout, staff attorney for the California Apartment Association (CAA). “The way the moratorium is drafted, there’s no end in sight.”

The suit is the second challenge to the county’s moratorium, following another suit by local landlords. County supervisors and a county attorney did not return messages Thursday seeking comment.Members of the Alliance of Californians for Community Empowerment (ACCE) said in a statement they were very concerned about ending the moratorium.

“Thousands of tenants in Oakland and across Alameda County will be rendered homeless if it is ended. It is also a colossal waste of resources by the corporate landlord lobby,” said ACCE legal director Leah Simon-Weisberg. “The case is very similar to the other actions that have failed thus far.”

COVID-19 protections and assistance for renters are being phased out across the state. The state emergency rental assistance program, a $5.5 billion aid package to landlords and renters, stopped accepting new applications in March 31.

A statewide ban on evictions for non-payment of rent during the pandemic ended April 1. Landlords can again take tenants to court for failing to pay rent, although tenants with pending aid applications with the state can be protected through next month.

The CAA suit is brought by seven property owners in Alameda County, claiming the eviction moratorium is “invalid, illegal, and unenforceable.” It seeks an end to the moratorium and damages for the landlords.

The Alameda County ban allows a few narrow exceptions, including for the health and safety of tenants and the removal of a property from the rental market.

The landlords in the suit describe loss of income and financial hardships because they are unable to displace their tenants. For example, Rakesh and Tripti Jain have rented their three-bedroom home in Fremont as a source of extra income to pay for their child’s college tuition. New tenants moved into the house in January 2020, and have yet to pay rent, the suit said.

The Jains received aid from the Fremont relief fund for 12 months of rent, but the tenant is still at least $58,000 behind. The suit also claims the tenant’s four German shepherds, forbidden by the lease, have caused considerable damage to the unit.

The stress has caused Tripti Jain “major anxiety and emotional distress, including panic attacks, and causing her to require occasional medication to treat the effects of the stress and anxiety,” the suit said.

Krista C. Gulbransen, executive director of the Berkeley Rental Housing Coalition, said many property owners have been struggling to pay their own bills and keep up their rental properties. Most landlords are willing to help renters with genuine needs, but some tenants have been taking advantage of the ban. “Enough is enough,” she said. A successful challenge to the ban, she said, “will allow us to go after the bad actors.”

PREVIOUS ARTICLE
Article 31 of 159
NEXT ARTICLE