Kelly Reichardt joined the competition with what could be called her first comedy. 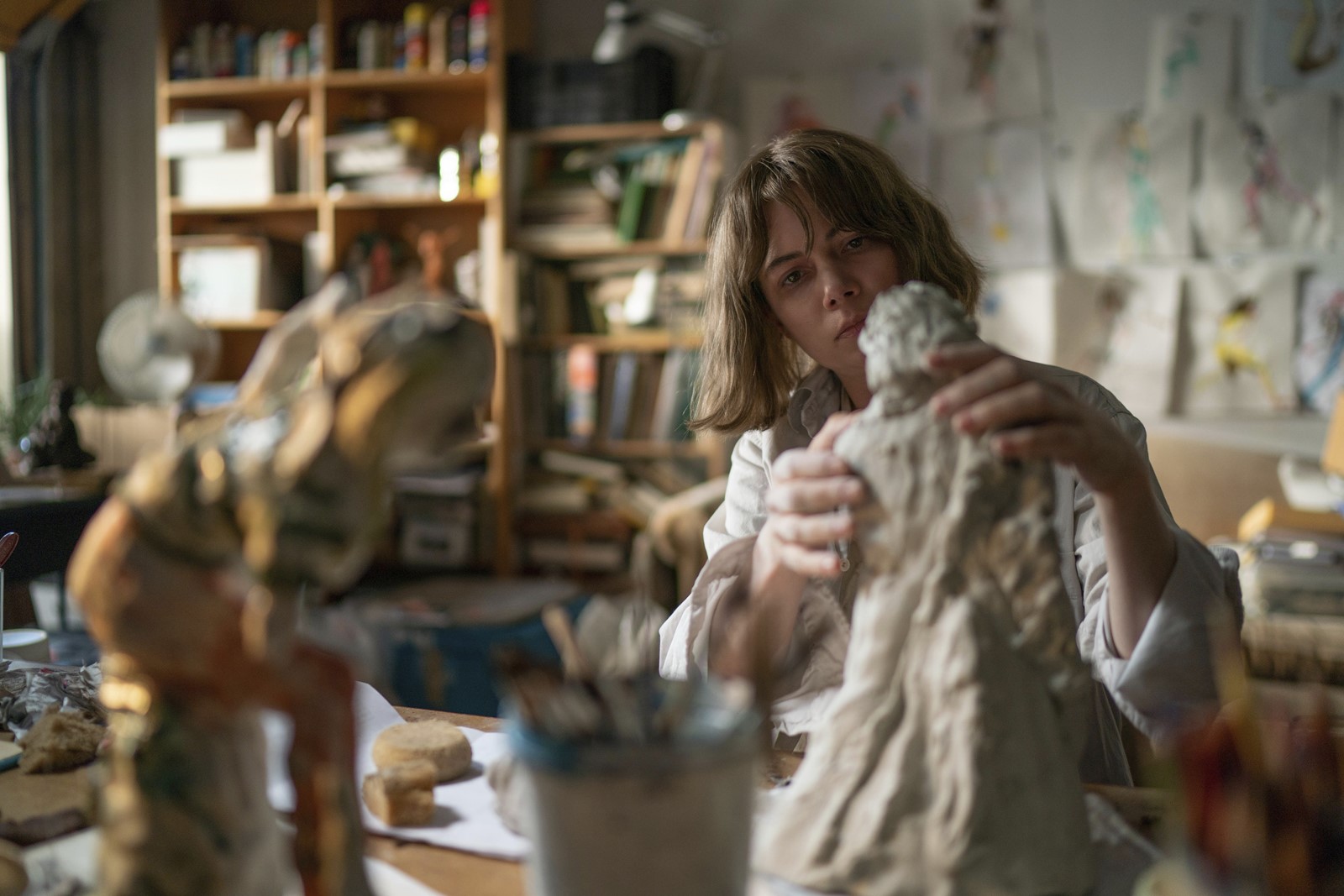 CANNES, France — Kelly Reichardt recently became the 20th filmmaker, the sixth American and the fourth woman to receive the Carrosse d’Or (or the Golden Coach), presented annually by France’s Society of Film Directors.

Accepting the award onstage in Cannes, the 58-year-old Reichardt said that when she was a Florida teen first setting out to pursue her filmmaking dreams, her mother gave her a book with an image of a woman holding a movie camera on the cover. Inside, her mom had written an inscription: “Maybe someday, this woman’s story can be your story too.”

The book, Reichardt revealed onstage, was a biography of the notorious Nazi propagandist Leni Riefenstahl.

As the audience laughter subsided, Reichardt went on, “I didn’t really learn how to figure out this filmmaking life from any book. It was just something that I was making up and forging on my own, and along the way picking up these amazing comrades.”

By comrades, Reichardt was referring to several artists she’s worked with repeatedly over her acclaimed 28-year career as an independent filmmaker, starting with her 1994 debut, “River of Grass,” and continuing with her eighth feature, the exquisite art-scene comedy-drama “Showing Up.”

The movie, which premiered Friday at the film festival, finds Reichardt once again reteaming with her writing partner, novelist Jon Raymond; director of photography Christopher Blauvelt; and actor Michelle Williams, whom she began working with more than a decade ago on “Wendy and Lucy.”

That piercing 2008 drama marked Reichardt and Williams’ first trip to Cannes together, which the director recalls being a uniquely stressful experience. She returned to the festival under less frenzied circumstances in 2019, as a member of the competition jury. Now, one pandemic and three years later, she’s landed in the Cannes competition herself.

During our conversation, I noted that it seemed more than a little significant that “Showing Up,” a movie about a female artist, had been included in a section of the festival that is regularly criticized as inhospitable to female directors.

Last year, Julia Ducournau became only the second woman in history, after Jane Campion, to win the Palme d’Or, for her horror-thriller “Titane.” This year’s competition consisted of 21 features, five of which were directed or co-directed by women; it’s an improvement over the norm, but not by much.

But Reichardt waved the irony aside, noting that — given recent and ongoing threats to women’s rights, especially the Supreme Court’s likely imminent overturning of Roe vs. Wade — steps toward gender parity in the entertainment industry, while always welcome, felt inconsequential by comparison.

“It is not just a question of moving forward at this point. We are being dragged backward,” she said. “If there’s anything the past six years have taught us, it’s that it’s all possible. Your worst nightmare is possible.

Maybe so. But sitting on the beach shortly before the start of another Cannes, Reichardt was nonetheless in fine spirits, punctuating her long, winding descriptions with sardonic asides and gentle laughs.

She said she was already having a more relaxing festival than in 2008 and was optimistic about the first reception for “Showing Up,” which A24 is releasing in the U.S.

“I know that it’ll look as good and sound as good as it can, and French audiences have been very kind to me,” she said. “Maybe by next week I’ll be really stressed out, but for some reason I just feel happy for it to be screened.”

In some ways, she was experiencing a more pleasant version of the experience that befalls her protagonist, also an artist awaiting an upcoming exhibit of her work.

Williams plays Lizzy, a Portland sculptor battling various personal and professional frustrations over several eventful days as an important art-show deadline looms. Many of Lizzy’s family and friends are also artists, including her recently divorced father (Judd Hirsch); her brother (John Magaro), who has bipolar disorder; and her free-spirited landlady, Jo (Hong Chau).

As is often the case with Reichardt’s brand of intimate, low-key realism, the story coalesces gradually, through details that have the mundanity and sometimes rueful comic sting of real life, whether it’s a malfunctioning water heater or an injured pigeon Lizzy finds herself nursing back to health. (As in many Reichardt movies, human-animal relationships figure heavily into “Showing Up.”)

Initially, Reichardt and Raymond had wanted to make a biopic of the painter Emily Carr, until they realized how well known Carr was in her native Canada. Always seeking out the little known and undiscovered, they decided to switch to a fictional subject.

That allowed Reichardt the chance to explore still another corner of the Pacific Northwest where she has set most of her movies. These include the recent “First Cow,” her superb drama about two men struggling to survive in the Oregon Territory during the 19th century.

Reichardt knew early on that she wanted Williams for “Showing Up,” a decision born of a close collaboration that’s now extended to four features over 14 years. The characters they’ve shaped together could scarcely be more different — a shy young drifter in “Wendy and Lucy” (2008), a determined settler braving the Oregon Trail in “Meek’s Cutoff” (2010), an emotionally thwarted woman gathering materials for a construction project in “Certain Women” (2016) — but they are united by the silent steeliness of Williams’ gaze and the significant time she and Reichardt spent fleshing each one out.

“Our communication about character always starts with books and films. She tells me what has been on her mind and I absorb what she has been influenced by,” Williams said, answering questions by email en route to Cannes. “Talking to each other feels like kids scratching in the dirt with sticks. The words are part of it, but it’s sharing space that makes it special.

“After 14 years of friendship and collaboration, I think that what we have really built is trust. I trust her wishes and desires and she trusts me to deliver them to her,” she said, adding, “I would swim with alligators if Kelly asked me to.”

Reichardt said that even after years of knowing that “Michelle can kind of pull off anything,” her mind was blown by Williams’ Emmy-winning performance in the 2019 miniseries “Fosse/Verdon,” in which she played a very different artist, dancer- actor Gwen Verdon.

Williams, for her part, sees similarities between “Showing Up” and Steven Spielberg’s upcoming semi-autobiographical drama, “The Fabelmans,” in which she plays his mother. Both movies, she says, are “about artists and the parents that formed them.”

For Reichardt, casting Williams also helped make Lizzy more sympathetic than she was on the page — a concern that you wouldn’t necessarily expect from a filmmaker known for viewing her characters in an unsparing, unsentimental light.

“In the script, we were at times worried that Lizzy would be too unlikable,” she said. “On paper, Lizzy was less appealing, I think, than Michelle’s Lizzy. I mean, I worried about it. The A-brain is always less appealing than the B-brain. And as an A-brainer myself, I know how annoying that is.”

If Lizzy is the tensely focused A-brain in “Showing Up,” then the more easygoing B-brain would be Jo, whom Chau plays with a mellow flightiness that frequently brings out Lizzy’s frustration.

In preparation for their roles, both actors spent considerable time working with sculptors: Chau trained in a New York studio with Michelle Segre, who works with metal, papier-mâché and other materials, while Williams molded clay with the Portland-born sculptor Cynthia Lahti, sometimes via Zoom during the earlier days of the pandemic. (The character of Lizzy draws from many inspirations, including Lahti; Jessica Jackson Hutchins, another Portland-based artist; and 91-year-old Lee Bontecou, a pioneering figure in the New York art world.)

When she finally visited Lahti in her studio, Williams said she was deeply affected by the sight of the sculptor’s life’s work in one space and its progression over years of dedication and experimentation — a progression that she likened to Reichardt’s own.

Lahti “can break the form she worked so hard for and now just wants to achieve more with less. How much can she risk on the figure and still be able to call it a figure? How gestural, how abstract?” Williams said. “Because she has also mastered the form, I think that Kelly asks herself the same questions.”

And filmmaking is something of a sculptural act for Reichardt, who builds spontaneity and adaptability into her own process. She doesn’t rehearse with her actors before shooting and tries to stay open to different influences, voices and possibilities throughout, including during the editing, which she invariably handles herself.

It’s no surprise that she likes to focus on manual tasks in her movies, whether it’s the cooking of oily cakes in “First Cow” or the collecting of supplies for a dangerous mission in “Night Moves,” her gripping 2013 thriller about a trio of Oregon environmental activists.

In “Showing Up,” the director and Blauvelt linger on shots of Williams’ Lizzy hard at work, wordlessly molding clay into the beautiful figures that will then be painted, baked and displayed at her upcoming show.

Elsewhere, the camera pulls back to take in bustling panoramas of life at the Oregon art school where Lizzy works alongside her mother (played by Maryann Plunkett).

Inspired by Reichardt’s years of experience teaching at Bard College, the School of Visual Arts and other institutions, these scenes were shot at the former Oregon College of Arts and Crafts, which closed in late 2019, its site planned for use as a private middle school.

Due to pandemic-related delays, though, the empty campus was still available for filming when “Showing Up” began production in June 2021 — “the one good side of COVID,” Reichardt said.

“I think the first script the line was like ‘funky people do their groovy artwork,’ ” she said. “It was really cool because, for me, it was like teaching and filmmaking finally came together.”

If “Showing Up” feels looser and funnier than Reichardt’s earlier films — it’s perhaps the first movie she’s made that could be described as a comedy — that lightness feels fully earned, as do her hopes of it finding an audience.

She conceived the movie in the wake of disappointing setbacks for “First Cow,” perhaps her most acclaimed film, which had premiered to rave reviews at the 2019 Telluride and New York film festivals. But it wasn’t released until March 2020, only to be swiftly pulled from theaters amid COVID shutdowns.

“I’ve talked to A24 about that strategy,” Reichardt said, laughing once more, “and I just don’t think it’s a good one.”