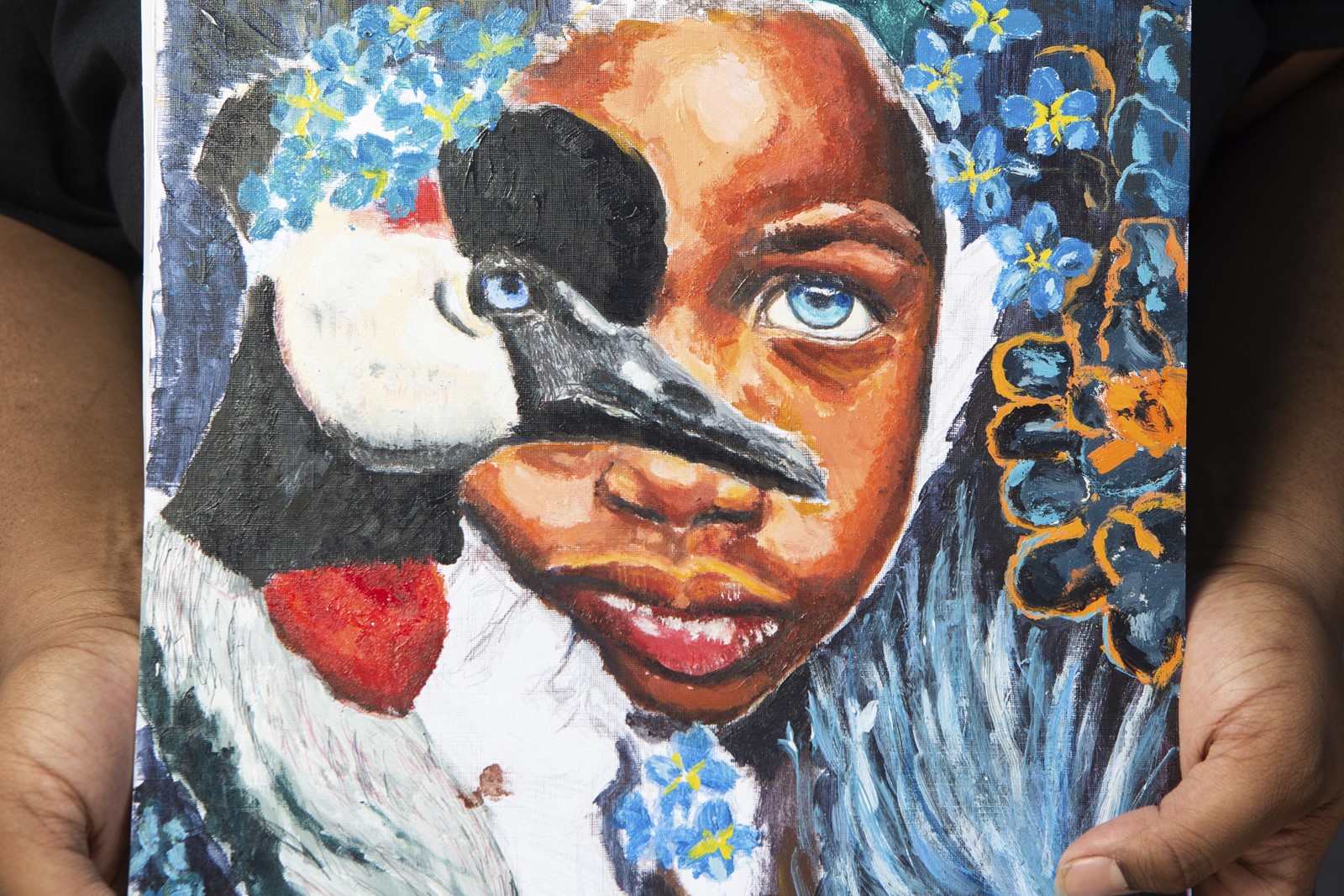 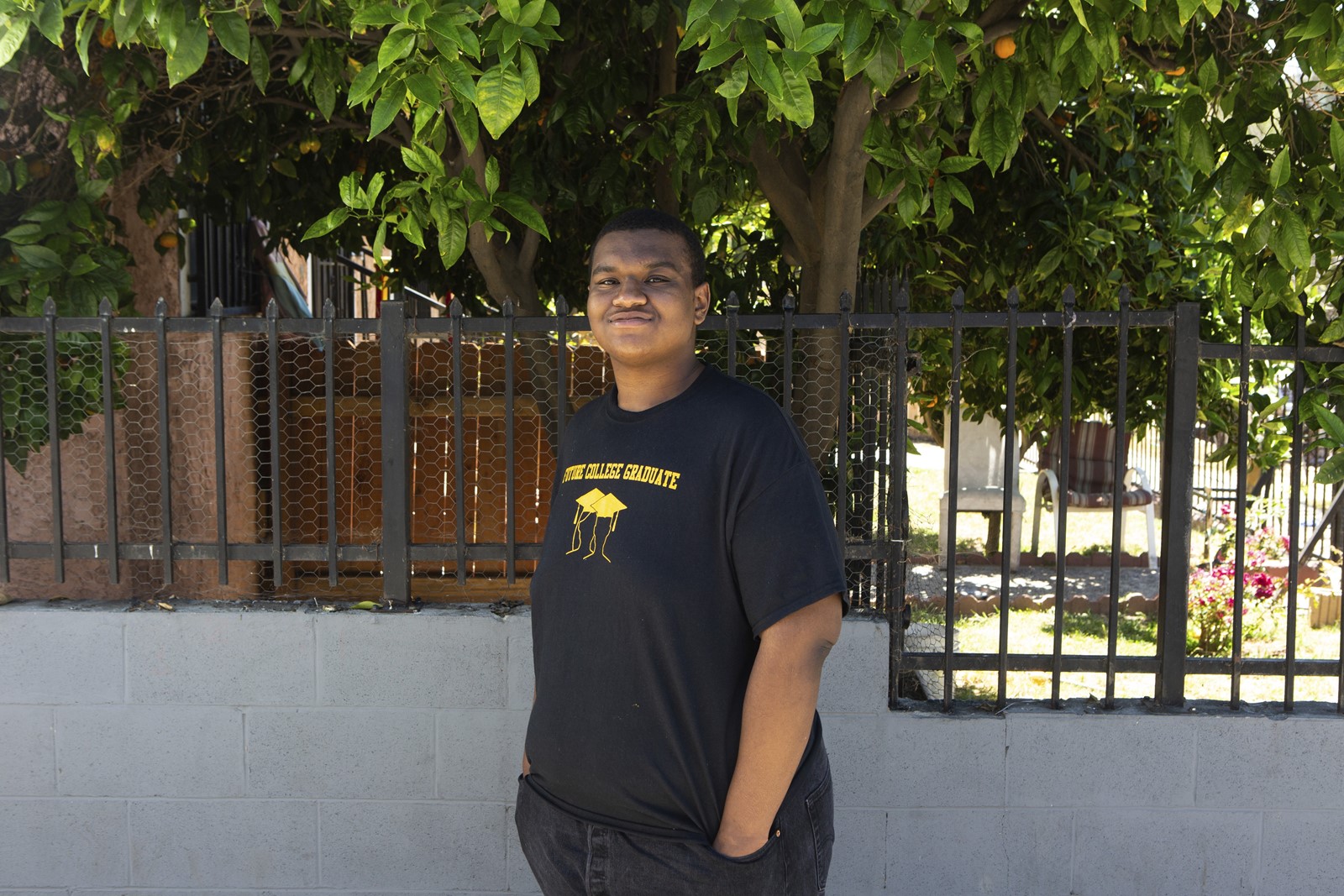 High school senior Keith Wallick really wants to go to college. “I know I have to go to make myself better,” he says.

But young Keith really did not want to go to school.

As a freshman, he “was very outspoken about his feelings,” recalls Susana Ansley-Gutierrez, principal of Santee Education Complex in South Los Angeles. “I would run into him on the quad, and he’d say, ‘Miss, I don’t really like school. Why do I even have to come?’ ”

His reluctance, she would learn, had dimensions beyond the academic.

It was hard just getting to and from campus. Keith and his mother had been homeless since he was in seventh grade, moving into and out of motels. His first year at Santee “was the most difficult,” he said. “The motel was far from school, so I was late a lot.”

As a new student, making friends did not come easy. Keith began ninth grade weighing more than 400 pounds. “I started feeling kind of sick about it,” he said. “Not liking myself because of my size.”

It was hard for Keith to open up to his teachers about his weight, his loneliness or his living situation. But once he did, school officials stepped up. They provided him with a loaded TAP fare card, so he could ride the Blue Line to school and not have to depend on his mom.

And with that simple gesture, he dropped his guard. Keith got to know his teachers and recognized what caring looked like.

“They were like life coaches for me,” he said. They taught him to enjoy healthful meals and encouraged exercise. Keith, who walked the track at school every day for years, shed more than 100 pounds.

When Keith showed a talent for painting, they suggested he expand his métier and take up dancing, fashion design and performance art. Which he did.

His horizons broadened, “and he matured into this amazing young man,” his principal says, as Keith prepares to graduate next month. “He went from ‘Miss, I don’t like school’ to being one of the most involved students on campus.”

This spring, Keith moved a step closer to his dream when college acceptance letters arrived. He was offered admission to three art colleges and decided on the Art Academy of Cincinnati, which offered a scholarship to cover his tuition.

But before that prospect could even sink in, COVID-19 landed, scrambling plans he thought were secure. He’d arranged to work this summer to earn money for his airfare and dorm fees, but jobs disappeared with coronavirus closures. Now school counselors and a local nonprofit are trying to raise money for him.

Keith is still determined to head to Cincinnati in the fall. But in a scenario familiar to multitudes of students since their campuses shut down, he’s struggling now to muster the enthusiasm that successful distance learning requires.

He lives with an older brother and several children in a crowded Watts apartment. He has to stash his unfinished paintings in a closet so the kids don’t bother them. He misses his teachers, the energy of classmates at work and a school storeroom stocked with the paintbrushes, colors and canvases he needs.

Student artists tend to be particularly frustrated by online classes, said Rubi Fregosa, arts education coordinator with the Partnership for L.A. Schools, a nonprofit that oversees Santee and 17 other LAUSD schools. “In the visual arts, there are a lot of specific tools you utilize … things that students may not have at home and don’t have access to.”

But those students also tend to be more engaged with school than their peers and more motivated to take on challenges, she said. “The arts provide support for social and emotional growth. ... Once students are able to find a passion, able to identify and explore their own interests, they are better able to set and pursue goals.

There are Keiths in every school, all across Los Angeles: struggling students with hidden challenges. Wayward children whose gifts have yet to be discovered.

Keith’s art teacher Carlos Vargas was once one of them. “I was a kid who was only good at art,” he recalls. “I think we are underestimated. … When schools create an environment with music and art, kids can be creative and not be judged for it in a negative way.

“Judgments might be harsh in math and science and English,” he said. “Teachers say, ‘No, do it this way, not that way.’ In art, you have to find all the good in the work that they do.”

It wasn’t hard for him to find the good in Keith’s artwork. The teen’s portfolio is so sophisticated he’s been officially deemed “gifted” in the arts.

Keith’s specialty is dramatic impressionist portraits, particularly of African American women. “I focus on them because that’s what I grew up with,” he explains. “I was raised by my grandma, my mother, my aunt.... Women basically made me who I am. And they’re not always appreciated as they should be.”

Talking with Vargas took me back to junior high school, to Ishmael Johnson, an art teacher who helped shape my life, even though he doesn’t know it. I signed up for his class because it sounded better than Home Ec. Mr. Johnson found something to praise in every project I did. I was convinced I had a gift. I realized in high school that art wasn’t it.

But the year I spent in Mr. Johnson’s class fortified my confidence in a way that, to this day, emboldens me. He celebrated my willingness to take creative risks. He taught me that art involved seeing with your heart as well as with your eyes. That’s a gift from him that I still rely on today.

For Keith, art was a lifeline tossed to him by another Santee teacher. He can’t recall her name, “but I can still see her face,” he said.

Shewas exasperated because he was such a chatterbox; he kept disrupting the class. “She wanted to occupy me so I wouldn’t talk so much,” Keith said. She told him he might be good at art. “She said I should take a class.”

That teacher could have focused on disciplining him and sent him to the dean instead. But she cared enough to look for a way to channel his mental energy. Keith took her advice and enrolled in Vargas’ class; his talent emerged, and a disgruntled teen became a confident young man.

That’s a lesson in how important thoughtful actions can be, particularly those little things we’re not liable to see when we’re obsessing over school test scores and judging overloaded teachers.

Keith may be the object of this column, but the subject is the community of teachers, classmates and administrators who cared enough to lift him up.

It’s a given that homebound students are losing academic ground this spring. But Keith’s story spotlights a less tangible but just as important cost of campus closures: the loss of ordinary moments that bond young people to their schools, their classmates, their teachers and their talents.

In adolescence, particularly, it’s easy for isolation to hijack a good day. It’s easy to feel deserted when you’re separated from your friends. And it’s easy to feel angry or depressed because you’re missing art class or softball or band.

“I worry about our students,” Santee Principal Ansley-Gutierrez admits. “Everyone is having to adjust to this new normal. That can really be difficult for students, to not have that social connection with their peers, to miss the teachers they have found a support system around.”

After all, a student’s future depends on more than good grades and high test scores. There are all kinds of interactions and opportunities in schools that can change a student’s trajectory — the TAP card Keith’s school handed him that gave him a sense of independence, personal connections that promoted trust. His relationships with teachers who shared their lunches and their lives, putting him on a path to better health.

And the academic accomplishments, even in a single class, that build confidence and allow every student to see themselves as gifted.