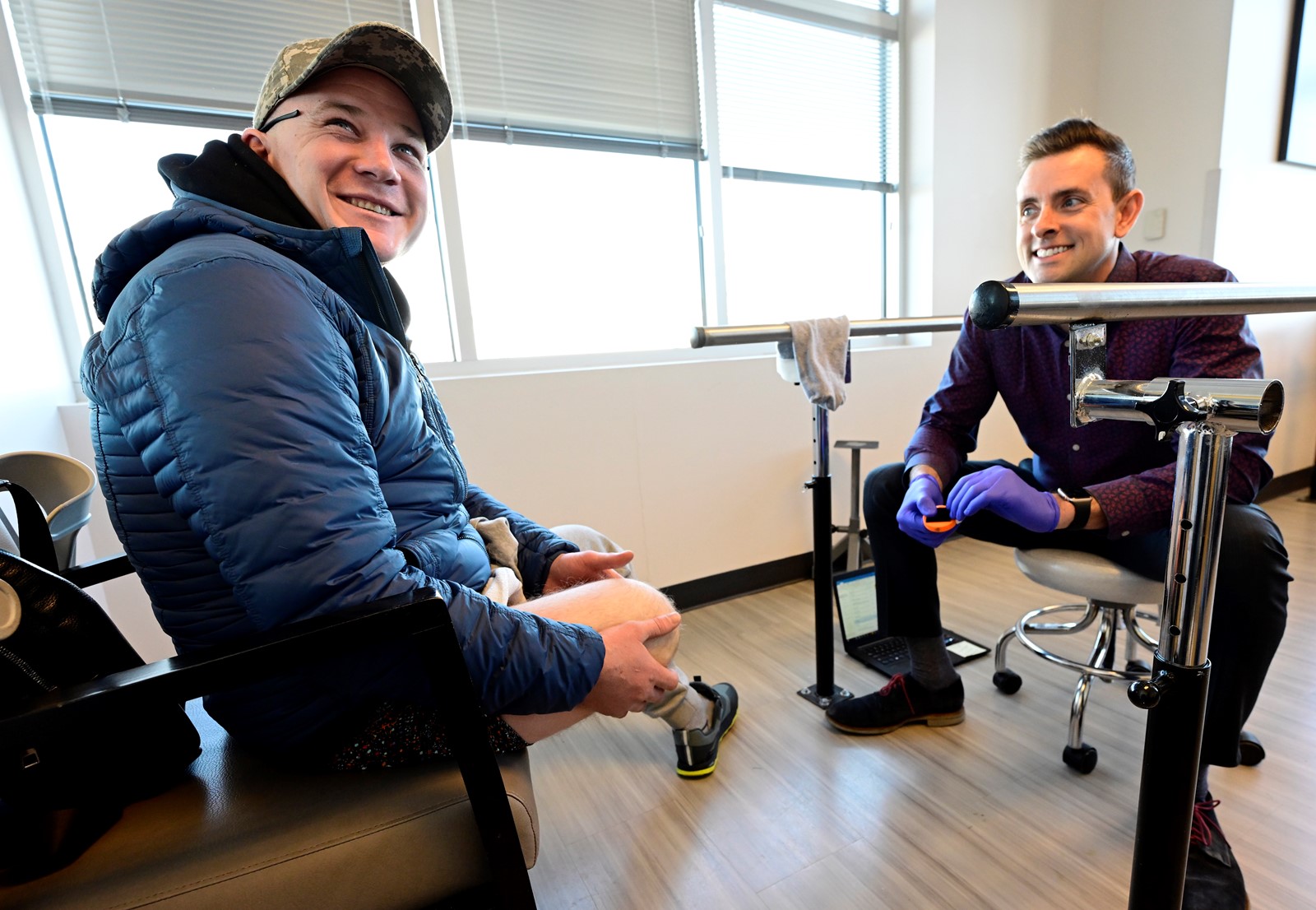 Andrii Chersak, left, is excited to get a prosthetic leg with the help of Jeff Retallack, a certified prosthetist. Chersak, 24, is a Ukrainian soldier who lost his leg during the war in September. He is in Boulder to receive prosthetic treatment courtesy of the Limbs for Liberty nonprofit. PHOTOS BY CLIFF GRASSMICK — STAFF PHOTOGRAPHER 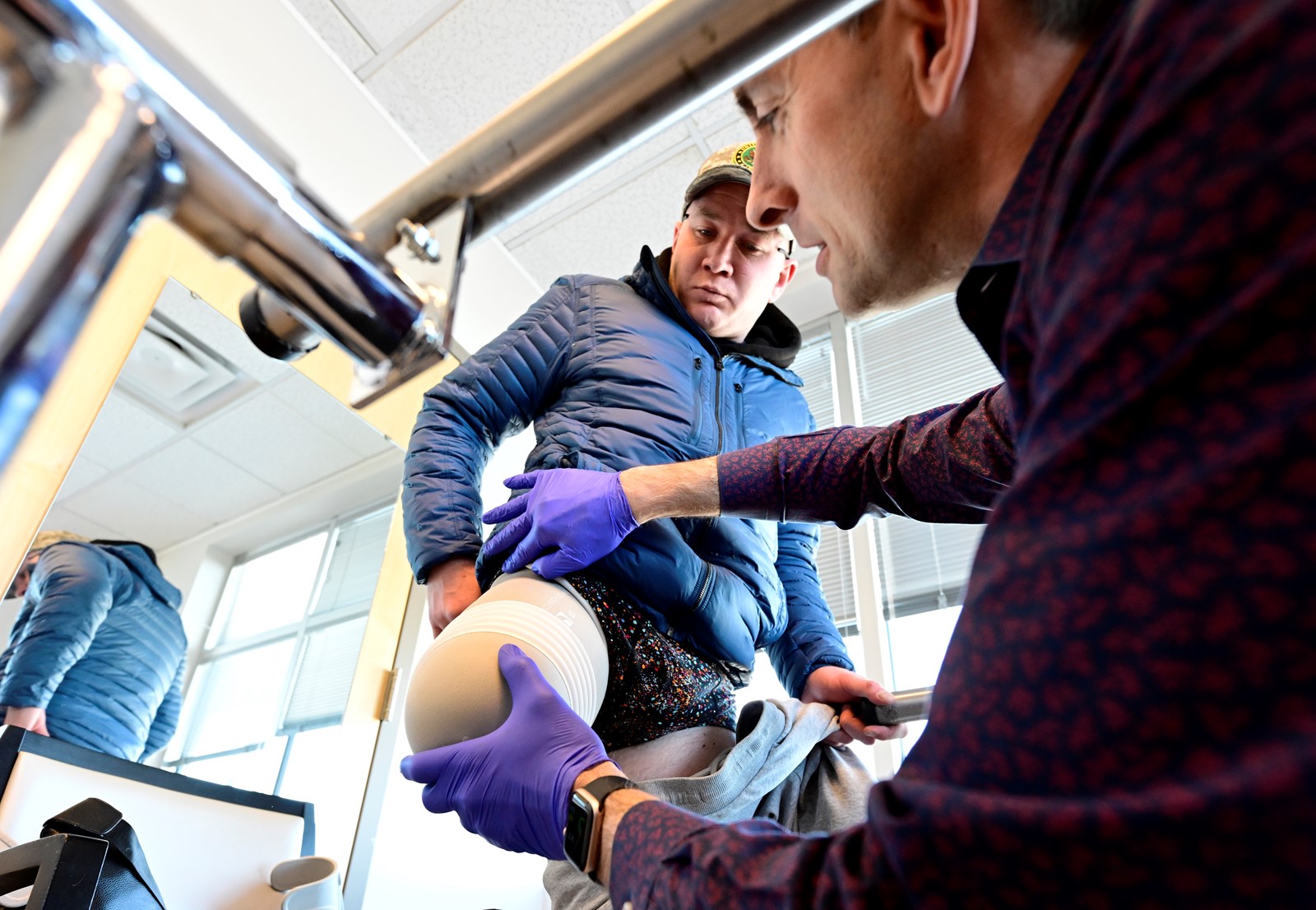 Andrii Chersak, left, is fitted with the sleeve for a prosthetic leg, held by Jeff Retallack, a certified prosthetist.

Despite Ukraine being 5,000 miles away from Colorado, the Limbs for Liberty nonprofit group is determined to help Ukrainian soldiers who have been injured in the Russian-Ukrainian war.

On the Limbs for Liberty website, Chersak said that he could not stand by and watch his country be invaded, so he joined the war effort. He started off by working at a machine-gun factory and was later moved to a brigade. He said that on Sept. 1, his brigade started heading toward Orekhov, Ukraine, where they took heavy gunfire and then were bombed by Russian forces. During the bombing, his right leg was torn off and his lungs were punctured.

His leg had to be further amputated when he arrived at the hospital. It was at the hospital that he met the Limbs for Liberty President Kelli Rohrig.

Rohrig and Chersak connected by pure coincidence. At the hospital, Chersak recognized one of the Ukrainian volunteers in Rohrig’s group, as they used to work together in Odessa, Ukraine. The volunteer, Anatoly Kirda, helped to translate between English and Ukrainian and connect the two. Rohrig asked Chersak if he would like to be Limbs for Liberty’s first soldier to receive prosthetic treatment under their care. He was delighted to hear of the opportunity. Rohrig then connected him with a Limbs for Liberty worker who could speak with him in Ukrainian, Irena Rastello.

Rastello was born in Russia and came to the United States when she was 20 years old and has lived here since. She said that when the war started, she could not remain indifferent and knew she needed to advocate for help. Rastello went to Ukraine at the start of the war to help, and that is where she met several other amputated Ukrainian soldiers and was determined to get them help.

Rohrig and Rastello, along with the help of another Limbs for Liberty volunteer simply known as S to protect her identity, worked together to bring Chersak to Boulder.

Several people gathered at the Denver International Airport on Dec. 18 to welcome Andrii Chersak to Colorado. Although Chersak has medical complications on the flight, many of the Limbs for Liberty volunteers who gathered together have donated to Chersak or taken him out for a day trip. Chersak’s journey to get to Colorado was a long one. He first had to take a bus ride of more than 10 hours from southern Ukraine to Krakow, Poland. From Krakow, he flew to Frankfurt, Germany. From there, he was able to fly to Colorado.

Rohrig said that the help Limbs for Liberty has received has been incredible, and that Chersak will need to travel back to Ukraine with another suitcase because people have been more than happy to donate clothing to him. Many restaurants in Vail and Breckenridge, where Rohrig is from, have held fundraisers for Limbs for Liberty. The Hanger Clinic is providing Chersak’s treatment free of charge.

“Everyone has been overwhelmingly accommodating and incredible,” Rohrig said.

Chersak had a fitting for his socket, which needs to fit perfectly in order to create an airtight seal so that the prosthetic does not slip off the residual limb. He is delighted to get his prosthetic.

“I can’t wait, I’m so excited,” Chersak said during his appointment as Rastello translated, “I’m just amazed with everything here.”

But Chersak’s time in Colorado has not been filled only with appointments. He is a very active person. He has been snowboarding, snowmobiling, gone to hockey games, visited museums and more. Rastello said that there are a plethora of volunteers who are more than happy to spend time with Chersak.

“It has been awesome, I’ve seen so many mountains. I got to ride on the snowmobile and ride really fast,” Chersak said with laughter, as Rastello translated.

Rastello said that Chersak is not the kind of person to let a tragedy define his life. She said that he loves to laugh and make others laugh. Since coming to Colorado and receiving prosthetic treatment, he is happier.

“He feels like he had a second chance at life,” Rastello said.

Chersak will receive his prosthetic this coming week, and will return to his wife and son in Ukraine the following week.

Article 1 of 66
NEXT ARTICLE