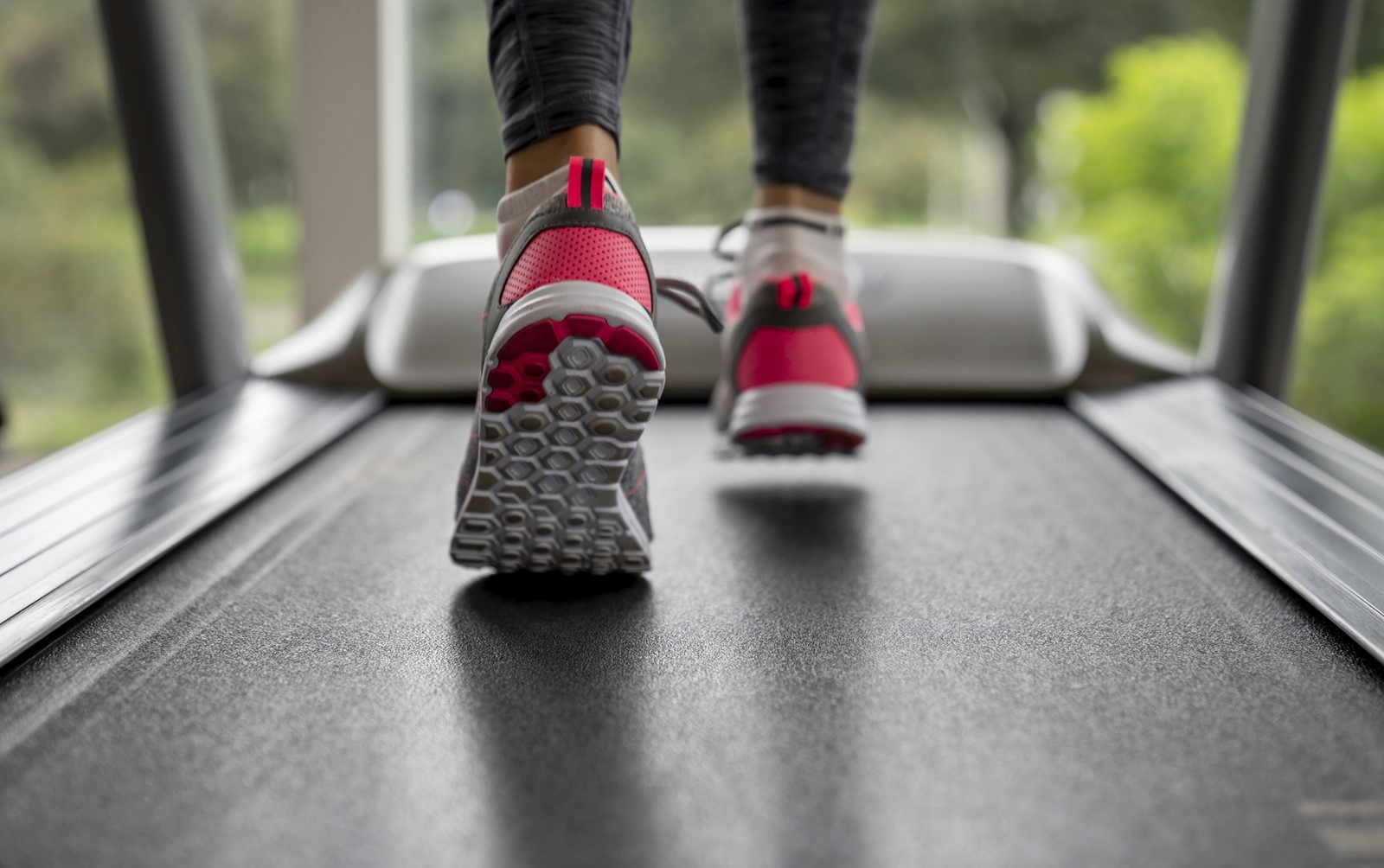 Thousands of Americans are probably hitting the treadmill anew, or for the first time, as part of their New Year’s resolutions. But imagine finally building up the motivation to step on a machine only to wipe out and land in the emergency room, your pride — and possibly a bone — shattered.

“We do see it,” said Lisa Moreno, president of the American Academy of Emergency Medicine. “Treadmills tend to be a little bit more dangerous than other kinds of equipment.” That’s because a rowing machine or elliptical is propelled by your own motion — so if you suddenly fall off or stop because you are distracted, it stops at the same time, lessening the odds of injury. On the other hand, Moreno said, “the speed of the treadmill, and the continuous movement of the treadmill, are sort of on autopilot.”

According to numbers provided by the U.S. Consumer Product Safety Commission, treadmills cause the most at-home exercise-equipment-related injuries. U.S. emergency departments treated 15,800 treadmill-related injuries in 2020. In 2019, that number was higher: 22,500. Deaths are very rare. In one prominent incident, SurveyMonkey chief executive Dave Goldberg died after falling off a treadmill and hitting his head. His wife, Facebook chief operating officer Sheryl Sandberg, however, later blamed an arrhythmia caused by undiagnosed coronary artery disease for his fall.

But injuries can include broken bones, sprains, abrasions, friction burns and blunt trauma. So if you’ve vowed to spend more time on a treadmill in 2022, it’s a good idea to brush up on safety tips first. And if you’re considering buying one, make safety a focus of your purchase.

Toril Hinchman, director of fitness and wellness for Thomas Jefferson University in Philadelphia, recommends studying the online ratings and reviews for all the machines you’re considering and selecting one with an appropriate weight capacity, belt size and cushioning. If you know you want to max out the incline feature, make sure your ceiling is high enough to accommodate it. Then, once you have it set up, read its manual. “No one loves reading through the book,” she said, “but it’s good to at least take a look at it and see if there’s something you need to be aware of.”

One of the main drivers of treadmill-related injuries is simply not paying enough attention, said Cedric Bryant, the president and chief science officer of the American Council on Exercise. Set aside your phone while you’re on the treadmill — don’t text or watch TV, for example. “If you get distracted and aren’t paying attention and you misstep, that can cause you to lose balance and fall off the treadmill,” he said.

Another tip: Accelerate and decelerate gradually, and hold the handrails while doing so to give yourself extra stability.

Bryant said it’s crucial to use your treadmill’s safety mechanisms. Most are equipped with an emergency stop system, like a panic button or a tether with a clip. The person using the treadmill should attach the clip to their clothing, so if they fall, it detaches from the safety key, prompting the belt to automatically stop.

“A lot of people ignore using those, because it can be a little frustrating if you accidentally have it come off and it stops your workout,” he said. “I would encourage any user to really adhere to it and use it as prescribed, because it’s an important protective mechanism should you lose your balance.”

Of course, treadmills aren’t dangerous only to those actively using them. If you have one in your house, your children are at risk, too. Jesse Taylor, chief of the Division of Plastic, Reconstructive and Oral Surgery at Children’s Hospital of Philadelphia, treats two or three children a year who have treadmill-induced third-degree burns or other injuries, such as nasal or eye fractures. (Last year, Peloton recalled its Tread and Tread Plus treadmills after they were linked to dozens of injuries and the death of one child.)

“What happens sometimes is a busy parent is trying to work out at home at the same time they’re watching the kids,” he said. “The kids are in the room, and they don’t know not to touch the treadmill the parent is exercising on, and then they get curious and put their hand on it or want to ride it with their parent.” Slightly older children or teens, meanwhile, might attempt to test out the equipment without appropriate supervision, leading to injury.

It’s best to have a dedicated room for exercise equipment — one with a door you can lock so your kids don’t have easy access, said Nkeiruka Orajiaka, an emergency medicine physician at Nationwide Children’s Hospital in Columbus, Ohio. If that’s not possible, she suggests setting up a gate to block off your treadmill. And, importantly, position the equipment so you can always see your kids (and/or pets) if they’ll be in the vicinity. “Some people want to be looking out the window” or at a TV, she said, but you need to be facing your children to ensure they don’t climb onto the equipment without you realizing.

Taylor recommends parents emphasize to their children that treadmills are powerful machines — not toys. Consider saying: “This is a machine that doesn’t know to cut itself off when somebody steps on or off it.”

If your kids do get hurt? “Apply pressure to any areas that are bleeding and get to an emergency room,” he said. If it’s dire or you’re unable to transport your child yourself, call 911.

Finally, keep in mind that your treadmill — like any type of expensive equipment — requires maintenance. Test the safety key periodically, and if it’s not working, get it fixed. Renee Rogers, a fellow of the American College of Sports Medicine, suggests having a professional check your treadmill once a year.

“Running belts need to be replaced, and when they start to lift, that can create a tripping hazard,” she said. “Dust gets in the motor. There’s a lot of different things that could happen.”

While treadmills may cause most at-home injuries, there are other hazards to keep in mind. Here are some tips to ensure you’re using your equipment safely:

Replace resistance bands often. These stretchy bands can snap and break in your face, causing a range of injuries, said Devin Christman, a physical therapist at George Washington University Hospital. “They do dry out over time,” he said, yet many people use ancient ones they’ve dug out of their closet. Make sure there are no signs of obvious fraying before using one — if there’s even a small hint of excessive wear, throw it out. Bryant suggests looking for braided, ropelike resistance bands. Design has rapidly improved in recent years, and this type tends to be safest.

Ease into strength training. Dropping heavy weights on your feet is exactly as painful as it sounds, and it’s not uncommon. One way to avoid that: Set realistic expectations. “I see a lot of times patients who will be bicep-curling 50-pound dumbbells, when they should be using five pounds,” said Jeanne Doperak, a sports medicine physician with the University of Pittsburgh School of Medicine. Starting slowly is one of the best safety pointers for any exercise.

If you’re not sure what size weights are right for you, Moreno suggests going to a gym and trying them out before investing in a pair that might be too heavy. Perhaps your office or the YMCA has a gym you could use, she said, or you could take advantage of a free trial at a local club.

Hinchman advises making sure your squat rack can sustain the load you’re lifting — read its specifications carefully. And use barbell clamp collars to secure your weights. These go on each end of a barbell to keep removable weight plates in place. “A lot of people don’t put the clip on the end,” she said. “So when they balance [the barbell] on their back to do a squat, or whatever they’re doing, if they’re not centered properly, it’ll slide off one side.”

Don’t do stunts on your stability ball. Some people, inspired by social media posts, stand up on or do maneuvers like pushups on a stability ball, which can cause them to fall, Bryant said. “Some of the Instagram and TikTok stars are able to do almost acrobatic [tricks], and sometimes people will try to emulate what they see,” Bryant said. “I would recommend that you perform those things on a stable surface and gradually work your way up.”

Dress appropriately. Some people feel like they can “just get on their exercise equipment for 10 minutes in whatever they’re wearing,” Moreno said. “Parts of clothing, or parts of the shoes, can get caught and cause an injury.” Make sure you don’t have billowing sleeves that could snag on something, and tie your shoelaces tightly before beginning a workout.

Enlist professional help. If you’re not sure how to safely use any of your fitness equipment, ask an expert to demonstrate. “Don’t be afraid to reach out to a certified personal trainer,” Rogers said. “We trainers are now ready for people to say, ‘I want to exercise primarily at home. How can you help me?’ ”

Haupt is a freelance writer.