‘Journey to the West’ travels a winding path 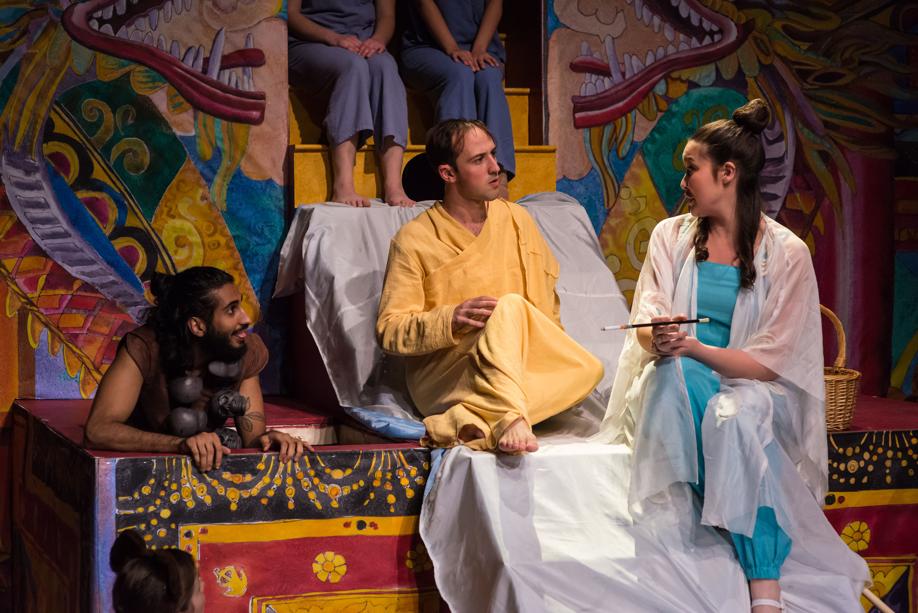 From left: Harsh J. Gagoomal, Jesse Garlick, and Jordan Clark in “Journey to the West’’ at Central Square Theater.

JOURNEY TO THE WEST

Adapted by Mary Zimmerman from the translation by Anthony C. Yu

CAMBRIDGE — At one point in “Journey to the West,’’ a stage adaptation of a celebrated 16th-century Chinese story, four travelers on the titular pilgrimage link arms and briefly launch into the “Lions and tigers and bears! Oh my!’’ sequence from “The Wizard of Oz.’’

It’s a clever touch that links two classic quest narratives across cultures and centuries, while also underscoring what appears to be the theatrical mission of “Journey to the West’’: To entertain audiences with a colorfully enacted fable while delivering a message that resonates with children and grown-ups alike about conquering your fears and reaching your goals through sheer persistence.

This co-production by Nora Theatre Company and Underground Railway Theater, directed by Lee Mikeska Gardner, fulfills that admirably ambitious mission only in part. “Journey to the West’’ is a mixed bag that feels aimless in the early going before growing more sharply focused and more compelling in Act Two.

Billed as a show “for all ages,’’ it was adapted by Mary Zimmerman from a translation of the original story by Anthony C. Yu. “Journey to the West’’ tells the convoluted tale of a lengthy, challenge-filled pilgrimage from China to India by a monk named Tripitaka, who is in search of sacred Buddhist texts and spiritual enlightenment.

Gardner’s bold visual imagination is a decided strength of “Journey to the West.’’ The artistic director at Nora Theatre Company, she gives the audience plenty to look at and, eventually, to feel, sustaining a consistent swirl of robust activity and ensuring that the emotional payoff of Act Two hits home. But, particularly for younger spectators, more clarity about who’s doing what and why would be helpful in Act One, perhaps by taking a cue from Actors’ Shakespeare Project, which places inserts in playbills that contain plot summaries of Shakespeare’s plays.

“Journey to the West’’ benefits from strong work by Gardner’s design team, especially David Fichter, whose intricately painted scenery tells its own story about tradition, place, and the power of folk tales. In addition, Gardner draws generally appealing performances from her 12-member cast, especially Lynn R. Guerra, who brings avidity and athleticism to her portrayal of a manic, mischievous Monkey King who is alternately defiant and eager to please.

The Monkey King is part of a trio, acting as both disciples and bodyguards, who accompany the initially timid Tripitaka, played by Jesse Garlick, on his journey. The others are a snuffling, pink-eared pig, portrayed by Shanae Burch, recently seen in “Milk Like Sugar’’ at Huntington Theatre Company, and a river monster played by Harsh J. Gagoomal. Benignly presiding over the digressive proceedings as the Jade Emperor, and functioning as narrator in spots, is the estimable, perhaps even inestimable, Thomas Derrah. Also on hand is Jordan Clark, recently seen in SpeakEasy Stage Company’s “Significant Other,’’ as Guanyin, a bodhisattva who offers sage observations like “If you hurry, you will never arrive.’’

But “Journey to the West’’ works best when the focus is on Tripitaka and his three companions. Monkey, monster, and pig form an endearingly adolescent trio who lend “Journey to the West’’ the aspect of a coming-of-age story. Guerra is seldom still as the Monkey King: hopping from one foot to another, turning somersaults, emitting simian sounds of dismay or jubilation.

Boston audiences are familiar with adapter Zimmerman and her taste for sprawling, byzantine narratives. In 2011, she directed an entrancing production of her adaptation of “Candide’’ at Huntington Theatre Company, then returned to the Huntington two years later, less successfully, with her staging of “The Jungle Book.’’ Two decades ago, she directed a production of “Journey to the West’’ at the Huntington.

Though cuts were made to Zimmerman’s original script for “Journey to the West’’ for the Nora/Underground co-production, further trims to the overlong show (now just under two hours and 40 minutes, including intermission) wouldn’t hurt — especially if the idea is to make “Journey to the West’’ a holiday-season replacement for “Arabian Nights,’’ which was a vibrant staple at Central Square Theater over the past five Decembers.

JOURNEY TO THE WEST

Don Aucoin can be reached at aucoin@globe.com.