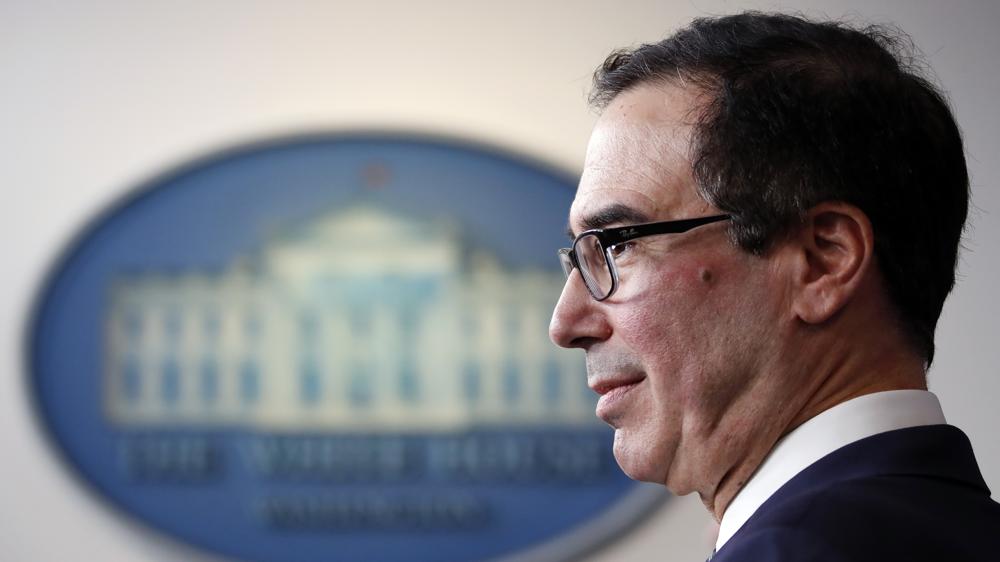 Treasury Secretary Steven Mnuchin has emphasized that lawmakers shouldn’t be concerned about the deficit.

The economy was shrinking and the ranks of the unemployed were swelling, but Congress couldn’t agree on how much money was needed to fight it.

As the Great Recession reached its depths in early 2009, lawmakers battled over spending about $800 billion to boost the cratering economy. Just three Republicans in Congress voted for the stimulus package pushed by President Obama and his fellow Democrats, with opponents warning of the rising national debt and its potentially disastrous impact on future generations of Americans.

With the coronavirus outbreak, however, money appears to be no object.

Last month, Congress unanimously approved a rescue package more than twice as large — $2 trillion — while barely batting an eye even though the nation’s debt is double what it was in 2009. Congressional leaders and the Trump administration were closing in Sunday on another package of about $450 billion to replenish a small business loan fund while also allocating more federal money for hospitals and testing. There are forecasts of hundreds of billions of dollars more in federal spending in the months ahead and that doesn’t even count an estimated $4 trillion in lending coming from the Federal Reserve.

Economists say the pandemic is a dramatically different crisis, a sudden and near-total shutdown of the economy that requires much more fiscal firepower to contain. Politics is also a factor, with Republicans holding the White House and President Trump’s reelection dependent on the state of the economy.

But another major reason why the sky appears to be the limit on spending in this federal response is what happened — and what didn’t happen — after the then-unprecedented efforts by Congress and the Fed to pull the economy out of the Great Recession.

It’s acknowledged now that Washington didn’t do enough back then to propel the nation out of the recession, leading to a slow recovery. At the same time, hyperinflation never developed and interest rates never soared. That meant the costs to borrow to buy a car or a house, and in the bigger picture, fund the US government, remained low. The hope is that will be the case again.

“There is a widespread realization in the Congress, across party lines, that this is the biggest public health catastrophe this country has seen in a century and ... it’s the biggest economic catastrophe we’ve seen in a century. Huge resources are going to be needed to fight it and we’ll worry about the national debt later,’’ said Alan Blinder, a Princeton economist and former vice chair of the Federal Reserve. “I think that’s very right.’’

He noted that despite “a lot of angst and some screaming" about inflationary pressures from the Great Recession bailouts and stimulus, the biggest inflation concern since then has been that it is too low.

Still, that doesn’t mean there are no potential negative consequences to the coronavirus response, which comes as the federal government has run huge budget deficits in recent years because of tax cuts and increased federal spending. At some point, the United States will have to address its soaring national debt, which at $23 trillion is approaching a level in relation to the entire economy not seen since World War II, or future spending could be hindered by massive annual interest payments on our borrowing.

“We were on an unsustainable level going into this crisis and that’s on us because we borrowed for many years during an economic expansion and that was pretty reckless,’’ said Maya MacGuineas, president of Committee for a Responsible Federal Budget, a nonpartisan fiscal watchdog group. “That shouldn’t constrain our spending today. But that means fixing the fiscal situation will be all that more challenging.’’

As Congress was considering the $2 trillion rescue package last month, Treasury Secretary Steven Mnuchin emphasized that lawmakers shouldn’t be concerned about the deficit.

“Interest rates are incredibly low, so there is very little cost of borrowing this money,’’ he told reporters. “And as I’ve said, in different times we’ll fix the deficit. This is not the time to worry about it.’’

That’s been Trump’s attitude since he took office, and it’s had an impact on Republicans in Congress who normally have opposed big deficits, said Douglas Holtz-Eakin, a former director of the Congressional Budget Office who was economic adviser to Republican John McCain’s 2008 presidential campaign.

“There are a lot of Republicans in the Senate who have traditional views of deficit spending, so what are they going to do? Say now, ‘We can’t do this in a crisis because of that?’ They’re sure Trump is going to cut their legs out from underneath them in a heartbeat,’’ said Holtz-Eakin, president of the conservative-leaning American Action Forum think tank. “He’s important and his views are important and [deficit reduction] has never been a priority for him.’’

Also unlike with the Great Recession, the response to the coronavirus isn’t hindered by concerns that a financial rescue is rewarding bad behavior. Many lawmakers and the public had problems bailing out bankers who made risky Wall Street bets that led to the 2008 financial crisis, as well as homebuyers who had over-extended themselves during the housing boom in the years before.

“Suspicions that somehow you were providing money to those who were causing the problem made people less generous then,’’ said Holtz-Eakin, who served on the federal commission that investigated the financial crisis. “This is businesses that were well-run and doing fine and suddenly their customers are gone.

“It’s hard to wrap your head around what’s going on out there. It’s horrible,’’ he said of the pandemic. “It was going to require a much bigger response.’’

Harvard economist Jason Furman was serving in the Obama White House in 2009 and remembers the pushback from some in Congress on the size of the stimulus package of tax cuts, aid to states, and infrastructure spending. The administration initially wanted $1 trillion but settled for $787 billion.

“I think it’s reasonably, widely understood that the fiscal response was too small,’’ said Furman, who went on to chair Obama’s Council of Economic Advisers.

That spending is OK for now because the interest rate on 10-year Treasury bonds, which help finance the US debt, are below 1 percent, Furman said. Despite the soaring US spending, investors aren’t demanding higher rates to fund this spending.

“In some sense, the market is telling us now loud and clear don’t worry about the debt,’’ Furman said. “I think there are limits. I think whatever we need we should do, but I don’t think you should be doing five times more than you need just in case.’’

The deficit problems are ahead, economists said. Once the economy is stabilized, Congress and the White House will have to figure out the best ways to stimulate growth and develop a plan to eventually address the deficit. That will pit Democrats who prefer tax increases on the wealthy against Republicans, who advocate cuts in non-military spending.

“As we go forward and we get to other priorities, you’re getting into things that have less unanimity and the politics will get tougher,’’ Holtz-Eakin said. “There’s going to be a recognition that while we spent the money we had to spend, we shouldn’t have started with a trillion dollar (annual) deficit and a high level of debt.’’