For women, senator’s exit a sad but all-too-familiar finish 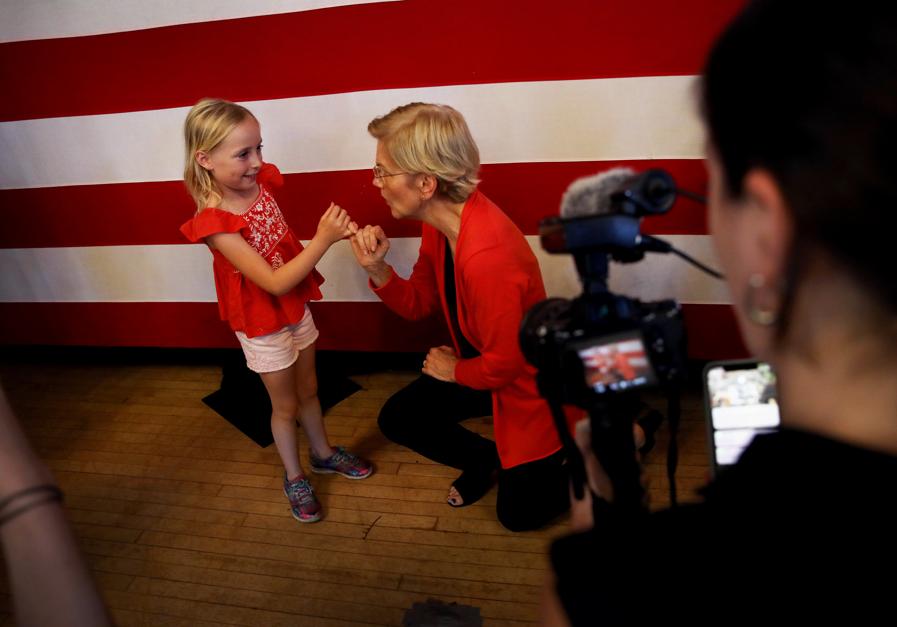 Senator Elizabeth Warren talked Thursday about her pinkie promises to girls on the campaign trail.

NEXT IMAGE
By Jazmine Ulloa and Laura Krantz, Globe Staff

WASHINGTON — It was a “pinkie promise’’ that Senator Elizabeth Warren would make with little girls in her “selfie’’ line: “I’m running for president because that’s what girls do,’’ she would say, squatting down and locking fingers so they remembered it.

As Warren stood outside her Cambridge home Thursday to announce she was dropping out of the 2020 race, her thoughts turned to those moments when asked about having only two white men — former vice president Joe Biden and Senator Bernie Sanders — left as the main Democratic candidates.

“One of the hardest parts of this is all those pinkie promises and all those little girls who are going to have to wait four more years,’’ she said, her voice catching a bit. “That’s going to be hard.’’

It’s not just those little girls who will have to wait.

For women across the country who hoped to see Warren — or any qualified woman — become the first female president, the news of her departure from the race was yet another disappointment mixed with heartache, and anger. The Democratic nomination process started with six diverse female candidates, including Warren and three other senators, after the 2018 congressional midterm elections saw women and people of color make historic gains.

But now, only one woman remains: Hawaii Representative Tulsi Gabbard, who has earned just two delegates and never broke into the top tier of contenders.

“Every time I get introduced as the most powerful woman . . . I almost cry because I’m thinking I wish that were not true,’’ House Speaker Nancy Pelosi told reporters Thursday, reflecting on what Warren’s withdrawal means about the willingness of the country to break the nation’s highest glass ceiling. “I so wish that we had a woman president of the United States.’’

Warren nodded to the contradictions women face in politics — or any professional pursuit.

“You know that is the trap question for everyone,’’ she said when asked about the role that gender played in the 2020 race. “If you say, ‘Yeah there was sexism in this race,’ everyone says, ‘Whiner!’ And if you say, ‘No, there was no sexism,’ about a bazillion women think, ‘What planet do you live on?’ ’’

“I promise you this,’’ Warren continued. “I’ll have a lot more to say on that subject later on.’’

A record-breaking number of women and women of color were elected to the House in 2018, causing political analysts to dub it the “Second Year of the Woman,’’ following a historic surge in 1992. Women now hold 101 of the 435 House seats and 26 of the 100 Senate seats, according to the Center for American Women and Politics at Rutgers University.

At first, the 2020 presidential race seemed to carry the same signs of progress for Democrats. The diverse slate of candidates included California Senator Kamala Harris, Minnesota Senator Amy Klobuchar, and New York Senator Kirsten Gillibrand, who was one of the most prominent faces of the #MeToo movement in Congress.

But they encountered the same structural barriers that women often do: inequities in donors and campaign infrastructure. And this year, the specter of President Trump loomed large, putting the hard-to-define concept of “electability’’ front and center.

“Democratic primary voters’ top priority is beating Donald Trump, and most subconsciously, I believe the gruesome reality of Trump’s America has put a fear in our hearts . . . about the effectiveness of the racist, sexist campaign he would have run against a woman or person of color,’’ tweeted Addisu Demissie, the former campaign manager for New Jersey Senator Cory Booker, who dropped his presidential bid in January.

Potential gender bias wasn’t the only problem Warren faced. Her campaign was criticized over the costs of some of her proposals, mainly her Medicare for All plan, and her lack of support from voters of color even though she made efforts to connect issues of racial disparity to her arguments about corruption and the economy.

And in the end, Warren had trouble even with women voters. Exit polls on Super Tuesday, when Warren was the only top-tier female candidate still in the race, showed her median support from women across all 14 states was 15 percent, trailing far behind Biden at 37 percent and Sanders at 25 percent.

But Warren did better with women than men, where her median support was 9 percent.

“Why we have replicated a pattern that has always been in American politics requires introspection,’’ said Erin O’Brien, a political science professor who was gathering her thoughts Thursday before preparing to lead her “Women in Politics’’ class at the University of Massachusetts Boston. “I know how the movie ends, but I still watched hoping for something different.’’

“I do think there’s a certain element of misogyny that is there,’’ Pelosi said, noting that Hillary Clinton “was better qualified than so many people who have sought that office and even won it.’’

As she went into the Senate to vote Thursday afternoon, Harris called Warren a friend. “When you look at the people, the women Elizabeth Warren, Amy Klobuchar, Kirsten Gillibrand, and you look at their records of work as national leaders on some of the biggest issues impacting America, it’s a shame that there are no women left in the race,’’ she said.

Gillibrand, who has said she faced trouble raising campaign contributions after publicly calling on former Minnesota senator Al Franken to resign over sexual misconduct allegations, called Warren’s departure disappointing. But she sought to focus on her own efforts to raise $1 million for other women candidates this cycle.

“We started this race with six incredible women candidates, very diverse women with all different levels of experience and vision for the country,’’ she said. “And I’m proud of every single one of them for the races they ran and the issues they lifted up, and I think our nominee will be stronger because of it.’’

Amanda Renteria, president of Emerge America, which trains women to run for office, and served as national political director for Clinton’s 2016 presidential run, said she saw parallels in the barriers faced by Clinton and this year’s slate of female candidates.

“In general, women have to do their homework more, they have to have distinct plans and detailed plans,’’ she said. “They say, ‘She doesn’t fight hard enough, doesn’t attack hard enough’ — and the moment she does, [they say] she attacks too much.’’

A study of nearly 34,000 candidates up and down the ballot in 2018 found that women and women of color won races at the same rate as men, making them just as electable, according to the research group Reflective Democracy Campaign. But the misconceptions over electability affect not only voters, but party officials, political donors, and other organizations shaping the landscape, said Brenda Choresi Carter, director of Reflective Democracy.

“There is a political myth that white men are more electable that is so entrenched in political culture that the power brokers who decide who is going to get the money, resources, and endorsements tend to perpetuate that myth more than anybody else,’’ she said. “The myth of electability becomes a self-fulling prophecy.’’