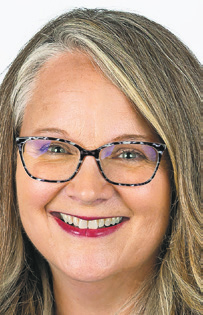 BRAINERD — With years of state government leadership experience and financial know-how, Robin Sylvester said she wants to bring those skills to the Crow Wing County Board table.

The Jenkins Township resident is the transportation finance management director for the Minnesota Department of Transportation, overseeing a plethora of revenue and expense streams adding up to a $4 billion budget, along with a team of about 120 employees.

When the COVID-19 pandemic led to a shift to telework, Sylvester said she and her husband took the opportunity in 2020 to move north to be closer to family and enjoy the beauty of an area in which Sylvester has roots.

Sylvester is one of two candidates seeking to represent District 2 on the County Board. The other candidate is Jon Lubke. District 2 covers northwestern Crow Wing County, including the cities of Crosslake, Breezy Point, Pequot Lakes, Jenkins and Nisswa.

The winner will replace Commissioner Bill Brekken, who is not seeking reelection.

Previous employers also include Camp Ripley and Bemidji State University, and Sylvester said she’s been a small business owner and currently assists with a family business.

The pandemic affected Sylvester in more ways than a change to her office view. While she said she recognized the need for safety amid an emerging health crisis, restrictions on gatherings suppressing places of worship and businesses were a swift and upsetting response in her view. Vaccine and testing mandates and their impact on individual liberties troubled her, according to Sylvester, and inspired her to be a voice for others in the workplace.

“I felt like for many years as a state leader, I was very much a ‘make sure it’s within the intent of the law or safeguarding the taxpayer dollars, the people,’ but I had a sense of duty to help others differently in the last couple years: those that didn’t feel like they had a voice,” Sylvester said. “I stepped up to be a voice, and even if it wasn’t my voice, it was to help them find an avenue to have a voice.”

Sylvester said she brings this same sense of duty and desire to listen to the people she serves with her as she pursues public office for the first time. Her run comes after she became active in local efforts beginning in 2021 to seek a forensic audit of the 2020 election results in Crow Wing County, along with advocating for various other changes to the election system.

Engaging in this activism showed Sylvester more can be done by commissioners to ensure constituents are at the table, weighing in on subjects affecting them.

For example, Sylvester said while the County Board relied on County Attorney Don Ryan’s legal interpretation of state law to determine it did not have the authority to conduct an election audit on its own, the board missed an opportunity to include those bringing the concerns in the conversation.

“Did we ever come to the table together to say, ‘Well, this is how I’m interpreting the law.

If elected, Sylvester said she would seek to establish task forces including members of the public, industry experts, local officials and a commissioner to address issues together.

This would increase community engagement while enhancing trust and transparency, she said.

“If there’s a group of people, whether it’s elections or it’s wetlands or it’s land management, whatever it might be of topics for our citizens, let’s make sure they feel like they’re at the table with us to bring solutions forward,” Sylvester said.

Among the highest priority issues for Sylvester are responsible growth in the county, accessible mental health services and returning to the basics in government spending to benefit taxpayers. Across all issues, Sylvester said she brings a passion for ethics and accountability.

“Our district, like much of Crow Wing, is growing, I mean, just substantially. It’s so much fun, but also it’s worrisome,” Sylvester said. “It’s worrisome on the healthy waterways, the natural wetlands, the noise changes, the growth on tourism. It’s just a great opportunity to bring folks, focus groups together. So I’m super excited to make a difference there.

“ … How can we address the concerns or the opportunities? And at what level do you want me there as a listener, as a partner? I’m here to help.”

Sylvester said when it comes to mental health services, the ripple effect of the mid-2000s closure of the state hospital system is now apparent.

“It was the right thing to do at that time, but we’re in a new season where there’s a need … so I want access to services for our veterans, for those in need, the vulnerable adults, the children,” she said.

Where Sylvester sees her expertise being especially effective is in the budgetary arena. She said her skills include investment planning, financial management, internal controls, interpreting and implementing policies and procedures, evaluating and mitigating risk and engaging in short- and long-term planning.

While everyone believes they’re doing the best they can, a new set of eyes might help to identify gaps or opportunities, she said. Programs should be examined closely to ensure tax money is spent wisely on needs rather than wants, and the county should take a strong stance on unfunded mandates from the state of Minnesota.

“Zero-based budgeting is super — it’s tough, but it’s starting from scratch,” Sylvester said. “It’s saying, ‘What do we need? How have things changed?’ … I’m just super excited to dive into that component of Crow Wing County.”

Asked how she would differentiate herself from her opponent to a voter, Sylvester declined to opine on who Lubke is or is not and instead focused on who she is.

“One of the best character traits of a person is self-reflection, and I have that. And I’ve just been really blessed — yeah, I’m not perfect, but I try to always do better,” she said.

“And so that’s what I would say to a voter is that I bring a lot. A lot of experience. I bring integrity. I bring ethics.

I bring my whole self, and I’ll be honest and transparent when I make a mistake. But I will also, always, keep my faith first, my family second and my work third.”