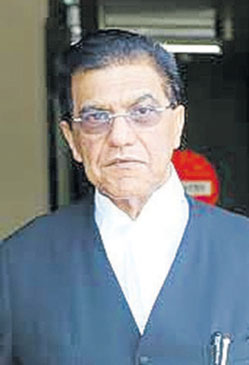 NEXT IMAGE
Ramesh: Speaker upheld the Constitution during motion on President
RENUKA SINGH

While the Opposition clamoured for the motion to be debated and attacked Annissette-George for refusing to allow it, Maharaj said the Constitution does not allow for a debate until the matter is passed by a two-thirds majority of the Electoral College.

The Opposition never got that far as the motion only received 24 votes in favour and 47 against by the Electoral College, around one-third of the votes.

“The Electoral College, therefore, is the body to decide whether an investigation is to proceed by a tribunal constituted to investigate the complaint,” Maharaj said in a statement.

The motion, Maharaj said, must be adopted by a vote, which means that the “motion to go forward requires a vote, not a debate,” Maharaj stressed.

Without that two-thirds vote in favour, the matter could not go forward, he added.

“If that number of votes is not obtained, there can be no investigation. That is what happened in this case with the motion filed by the leader of Opposition,” Maharaj said.

Maharaj said that if the requisite vote for the investigation is obtained, a tribunal is appointed by the Chief Justice.

That tribunal then comprises four other judges and the Chief Justice.

“That tribunal investigates the complaint and then presents a report on the facts to the House of Representatives,”

Maharaj pointed out that the first stage in the procedure was limited to a “vote by the members.”

“Section 36 (c) of the Constitution states that the Motion is adopted by the vote of not less than two-thirds of the total membership,” he said.

During the debate, the Opposition pounded their desks and demanded a debate.

They said the Speaker was denying them their right to be heard, noting that they were representing the voice of the people, which was being silenced. Furthermore, they argued that the Speaker was stymying the principle of such a motion, which they claimed required debate.

“If the Speaker did that, she would have acted unconstitutionally and contrary to the oath she took as Speaker for her to obey and uphold the Constitution of the Republic of T&T,” he said.

Maharaj said any Member of Parliament, whether of the House of Representatives or the Senate, “if that member was permitted by the Speaker of the House of Representatives to violate this specific Constitutional procedure - would also have acted contrary to the oath the Member took upon assuming office to obey the Constitution and laws of the country.”

The Opposition has also slammed the Independent Senators for voting with the Government and against the motion.

The UNC claimed that the Independent Senators could not be counted on to be truly independent, as they are appointed by the President.

They also accused them of singing for their supper.

Guardian Media has been attempting for days to contact the Independent Senators on this issue but was met with little success.

Only Senator Maria Dillion-Remy responded to Guardian on Monday night saying, “All independent senators were appointed by the President. However, we do not report to the President.

The President expects that we will take our oath seriously. I do.” She added, “I try to examine everything on its merit and seek to do the best for my country.”