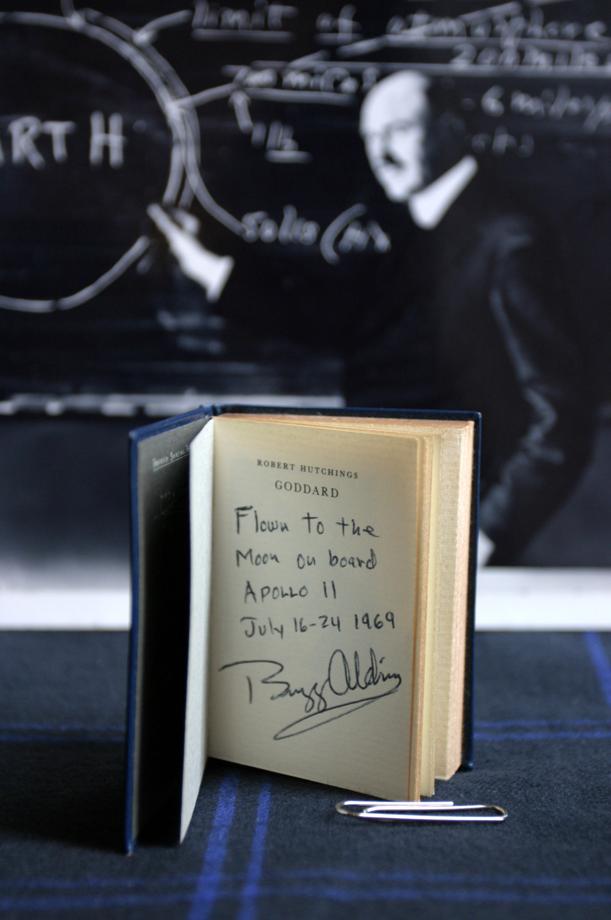 When Buzz Aldrin embarked 50 years ago on his historic voyage to the moon aboard Apollo 11, he packed a tiny, credit-card-sized book, “The Autobiography of Robert Hutchings Goddard, Father of the Space Age.’’

Goddard, who was a physics professor at Worcester’s Clark University, launched the first liquid-fueled rocket in Auburn in 1926 and is generally considered the father of modern rocketry.

For Aldrin, who was the second man to set foot on the moon, there was also a personal connection.

Goddard had taught Edwin Aldrin Sr., Buzz’s father. Buzz never met Goddard but cherished his father’s connection with the professor, said Fordyce Williams, a coordinator of archives and special collections at Clark, where the book is on display.

The book was published after Goddard’s death, “but I think he would be happy it was published and the fact that it went to the moon would be absolutely incredible for him,’’ Williams said this week as the 50th anniversary of the moon landing approached on Saturday.

Goddard’s autobiography includes a story called the “cherry tree vision.’’ When he was 17, in 1899, he was trimming dead branches off a cherry tree and looked over the fields surrounding him, Williams said.

“[A]s I looked towards the fields at the east, I imagined how wonderful it would be to make some device which had even the possibility of ascending to Mars. . . . I was a different boy when I descended the tree from when I ascended for existence at last seemed very purposive,’’ Goddard wrote.

In his diary, he wrote that he envisioned the device had “a weight whirling around a horizontal shaft, moving more rapidly above than below’’ — and that “could furnish lift by virtue of the greater centrifugal force at the top of the path.’’

Goddard called the day of the cherry tree, Oct. 19, 1899, “anniversary day,’’ and noted it in his diary every year, Williams said. When the cherry tree fell in a hurricane in 1938, he wrote, “Cherry tree down. Have to continue alone.’’

Goddard wrote his autobiography shortly after he launched his first rocket, Williams said. He died in 1945 without seeing it published — and without seeing the 1960s space program that would land men on the moon using giant rockets that were descended from those he had pioneered.

He also did not live to receive $1 million from the US government, which paid Esther Goddard, his wife, and the Guggenheim Foundation, which funded some of his research, for infringing on Goddard’s rocket patents.

The book was published in 1966 by Achille St. Onge, a miniature books publisher in Worcester. St. Onge published 1,926 copies of the book in honor of the year of Goddard’s first launch. The 85-page book, bound in dark blue leather, is about 3 inches tall and 2 inches wide.

“The publishing of the book probably would’ve been St. Onge’s idea. He would’ve needed to have gotten the autobiographical materials from Esther, so she obviously gave her OK and gave the materials to publish the book,’’ Williams said.

Aldrin brought the book to the moon at the request of St. Onge.

“St. Onge sent the book to Buzz Aldrin in June before his flight and said, ‘Take this book with you and leave it on the moon in honor of Goddard,’’’ Williams said.

“He was not able to leave it on the moon, but he wrote a letter back to St. Onge in September and said: ‘Thank you for the book. I did take it with me, but I wasn’t allowed to leave it there.’ But he brought it back and said he’d give it to either Esther or Clark.’’

Aldrin decided to give the book to Goddard’s widow, who eventually donated it to Clark.

Aldrin autographed the book and wrote, “Flown to the moon on board Apollo 11.’’ Visitors can see the book at the university’s Robert H. Goddard Library, along with other items donated by Esther Goddard, including correspondence from Robert Goddard, patents, and photographs.

Jeremiah Manion of the Globe staff contributed to this report. Alyssa Lukpat can be reached at alyssa.lukpat@globe.com. Follow her on Twitter @AlyssaLukpat.