Warren struggling with voters of color
Despite her policies, she has made few inroads 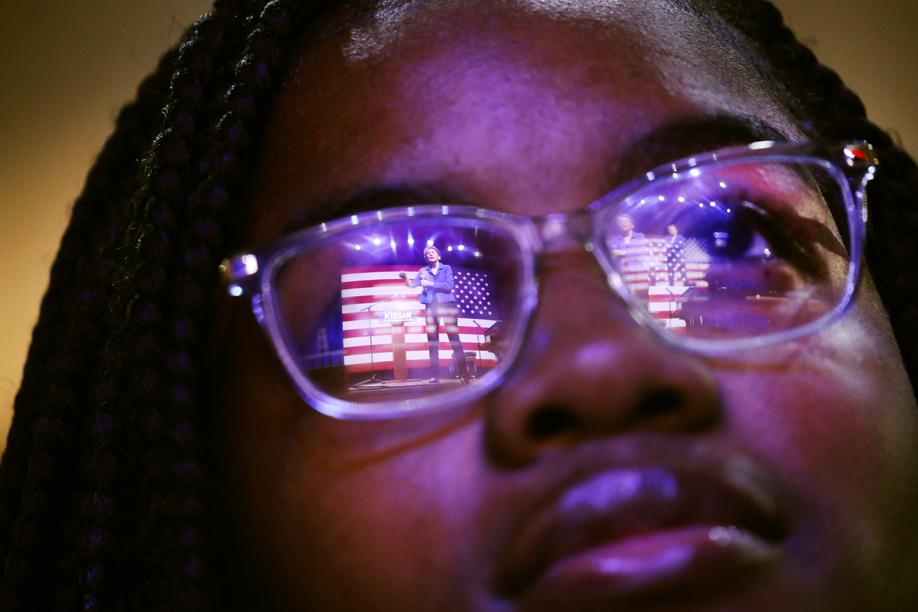 Senator Elizabeth Warren was reflected in a student’s glasses while speaking at South Carolina State University this week.

In the spring of 2015, about a dozen progressive activists met with Senator Elizabeth Warren in Washington, D.C., and they wanted to discuss an important issue: race.

At the time, she was a leading progressive and potential presidential candidate whose searing critique of capitalism run amok had caught fire with the left, but they felt there was more she could do to consistently connect that argument to the racial disparities in the economy.

“We really wanted to see how we could integrate some of the analysis of what’s happening in communities of color within her economic argument,’’ said Jonathan Westin, the executive director of New York Communities for Change, who was one of the attendees.

Warren listened carefully, and the activists felt like their words had an impact. She told an audience in Boston that “Black lives matter’’ later that year, combining it with a scathing critique of the criminal justice system. Since then, she has made race a major focus of her presidential campaign, speaking directly about discrimination in her stump speech and on the debate stage, and drawing praise from Black activists for her plans to address it.

But despite Warren’s emphasis on issues of race — and even her willingness to change her policies on criminal justice, agriculture, and housing in response to feedback from activists of color and other progressives — she has struggled to gain support from voters of color. That failure could have a particular impact when voters go to the polls Saturday in South Carolina, where former vice president Joe Biden is widely considered to have a lead among Black voters, and Vermont Senator Bernie Sanders is making gains.

There was a time when Warren’s campaign hoped she would be able to build more support with voters of color than fellow liberal Sanders, and leapfrog him in states with diverse populations. But she came in fourth in Nevada, where Sanders built a landslide victory on his support from Latinos. South Carolina, where Black voters make up the majority of the Democratic electorate, will be Warren’s next test, but she seems unlikely to finish higher than fourth place.

But, Brown said, “People in these states, in South Carolina, they don’t know her.’’

Even some of the same activists who met with her in 2015 and have lauded her approach to race ended up endorsing Sanders instead.

“His universalist policies will have the greatest impact on people of color,’’ said Jennifer Epps-Addison, the co-executive director of the Center for Popular Democracy.

Over the last year, Warren made more trips to predominantly white states like Iowa and New Hampshire, which vote first, than she has to make her case to Black voters in South Carolina. And some of her critics say her support from Black activists with big online followings has not helped her make inroads with voters on the ground or build relationships with Black leaders in the early states.

“She has a lot of Black social media influencers that support her, but I’d rather take the bishop of the AME church any day of the week,’’ said Bakari Sellers, a former state representative and political commentator in South Carolina. “Plans are one thing, but if your doctor has a bunch of plans for you, but you don’t have any relationship or trust, then those plans won’t go far.’’

Warren has made numerous campaign trips to South Carolina and has sent prominent Black surrogates, including Massachusetts Representative Ayanna Pressley, to campaign there in her stead.

Pressley said that each time she campaigned in South Carolina, “we bring more people along,’’ and that she sought to draw a connection between Warren’s plans and voters’ lives.

“They love that she’s a woman of faith, they’re impressed with her creating the Consumer Financial Protection Bureau. A state like South Carolina has been disproportionately impacted by these sort of abuses,’’ Pressley said.

Warren often devotes large chunks of her stump speech to highlighting racial disparities in the economy and housing while touting her willingness to consult with affected groups as she developed her plans.

“There are a lot of candidates in the race that talk about Black voters, they may even talk about issues that are important to Black voters, but I think Senator Warren is the only one that listens to us,’’ said Angela Peoples, the leader of Black Womxn For, a group of female and gender-nonconforming activists of color who have endorsed Warren.

On Wednesday, Warren campaigned with the musician John Legend, and the two drew a diverse and excited crowd to South Carolina State University in Orangeburg — but even her supporters there said they wished more people in the state felt what they did.

“I wish there would have been a way that more people could have actually heard that speech she just did,’’ said Kimlyn Brown, 53, who attended the event and said Warren had won her vote by talking about canceling student debt, which disproportionately weighs on Black students.

But later, Warren drew a mostly white crowd to an evening event in Charleston — an indication that her campaign was still struggling to draw in more Black voters.

Interviews with other voters this week in South Carolina revealed that, while Warren’s plans and direct rhetoric on race have excited activists, they don’t hold the same sway over many voters as the relationships Biden has forged with Black leaders or the time and resources that billionaire Tom Steyer has put into his campaign here.

“She has not spent a lot of time here,’’ said Michelle Nelson, 46, an adjunct professor at the medical university of South Carolina who watched Warren, Biden, and others speak at a breakfast hosted by Al Sharpton in North Charleston on Wednesday.

Even as Warren has struggled to expand her support, there were signs that Sanders has managed to grow his Black support here.

“It was his universal health care, that’s number one,’’ said Pamela Rumph, 60, of North Charleston, who said she was a Biden supporter when she entered the breakfast on Wednesday but left considering Sanders and former South Bend, Ind., mayor Pete Buttigieg.

“What she said was good,’’ Rumph said, of Warren, “but I just didn’t feel a connection and really can’t say why.’’

Brown also pointed out there are many groups of voters who have not coalesced in an obvious way around Warren — not just Black voters. “I really hope to see a much more vibrant collective of white women just publicly coming out and taking leadership around her campaign,’’ she said. “Part of that also impacts Black people.’’