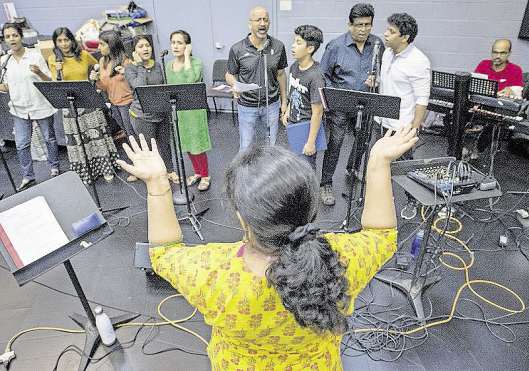 Robert W. Hart/Special Contributor
Vocalists from the cast of The Red Pashmina rehearse at the Irving Arts Center. The show, which is a collaboration between Mainstage Irving-Las Colinas and ThinkIndia Foundation, will be presented there on Saturday.

NEXT IMAGE
Two worlds brought together
Pair of companies team up and forge new friendships over ‘The Red Pashmina’
By NANCY CHURNIN Theater Critic nchurnin@dallasnews.com

Last year, a question hung in the air.

What would happen if two companies with different artists and styles teamed up? Would the audience for Mainstage Irving-Las Colinas, a community theater at Irving Arts Center, turn up for a ThinkIndia Foundation production of Rang De! Color Me India!, a show telling the story of India through song and dance? Would the audience for ThinkIndia Foundation, an organization that raises money for charity through the arts, see a show in the Mainstage Irving-Las Colinas season?

The answer is yes and yes.

As a result, hopes are even higher for this year’s collaboration, The Red Pashmina.

The ThinkIndia Foundation show involves a psychiatrist and patients in a splashy musical. It promises another deep dive into India that extends from a fishing village to a palace and a dungeon over four eras. The show kicks off the MCL season Saturday at the Irving Arts Center.

Ravi Srinivasan, the president of ThinkIndia, describes himself as “ecstatic” over the reception of last year’s show and the anticipation for The Red Pashmina.

After all, bringing people together through the arts is part of the mission statement for his organization.

“Last year, there was nervousness in terms of how we will work together,” Srinivasan says on the phone from Dallas. “It was a learning experience and we continue to learn, which is OK. But at the end of the day, we were able to bring people together in a creative effort, give back to the community and set up a forum where this can happen on a regular basis.”

Recognizing the way the two companies were bringing two communities together, the city of Irving got on board, awarding MCL an Innovation Grant of $10,000 to help with this year’s production.

The organizations are even more intertwined than they were last year, Srinivasan says, with the company members hammering out the script and production details at each other’s homes and building sets together in the scene shop. There are more acting opportunities for MCL performers in the cast of 60-plus, with a London pub scene that gives them a chance to show off their British accents.

Clayton Cunningham, the president of the board of MCL, helped behind the scenes last year. This year, he jumped at the opportunity to play one of those British officers.

“You get to know people differently and better when you’re performing with them.

I wanted to have that experience with folks I knew and folks I didn’t know.”

Friendships have deepened during time spent together, Cunningham says.

“We had a nine-hour rehearsal on Sunday. A member of ThinkIndia brought a homemade lunch. I had a couple of different rice dishes, some hot tea and dessert that I hadn’t tried before and really liked.”

At its heart, this is a story of how one friendship can lead to so many others.

Color Me India! was a dream hatched by two engineers, Ramesh Thiagarajan and James West, who worked together for years at Bell Helicopter in Hurst. Thiagarajan invited West to his daughter’s Indian dance recital, presented by ThinkIndia in 2012. West loved it. West invited Thiagarajan to see West perform in MCL’s production of Neil Simon’s Fools in 2013.

Cunningham had never heard of ThinkIndia when Thiagarajan and West brought him the idea for a collaboration.

Before last year’s show opened, Cunningham sounded hopeful, but not yet committed, as he said: “This time next year we might do another show with ThinkIndia.”

This year, Cunningham is not only performing in The Red Pashmina, he and Srinivasan have bonded over the mechanics of putting the show together. Srinivisan worked collaboratively with Anisha Srinivasan, Shatarupa Purohit, Shibani Limaye and Malti Srinivasan on the show concept and artistic direction.

The team welcomed input from the MCL team throughout the process, including where tweaks and trims were needed. Srinivisan has also worked on the script and directed the scene in which Cunningham performs.

“They sound terrific,” Srinivisan says of Cunningham and his cast mates.

“There have been weeks where we texted or emailed each other two or three times every day,” Cunningham says.

“He’s wonderful — very full of energy, very focused and very fun-loving. We have a good time.”

And this year, there is no “might” about next year’s show. The two companies are locking in dates at Irving Arts Center for September 2019.