Tide wants to clean and fold your clothes. I gave it a try.
The company has installed laundry lockers in apartments around Boston and plans to have 100 in place by year’s end 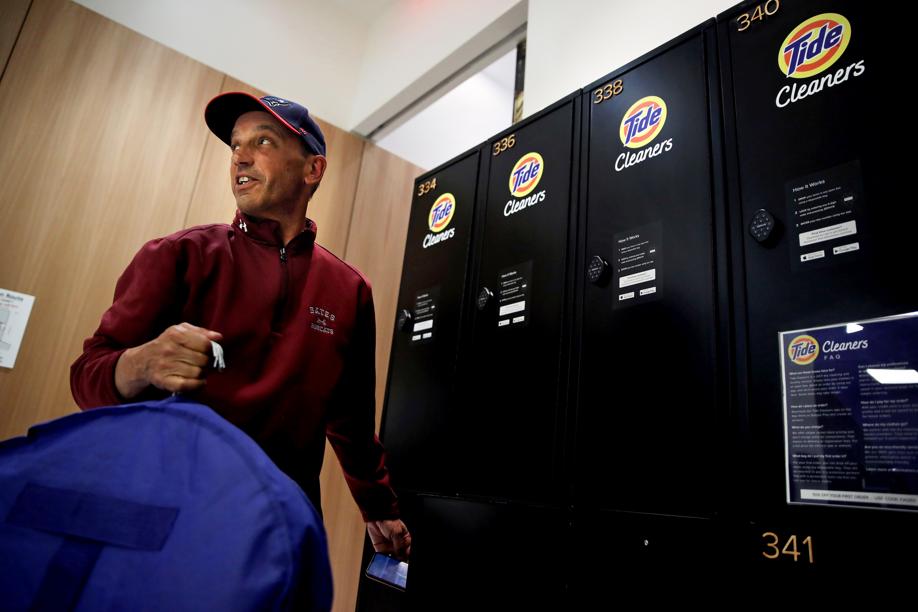 Procter & Gamble says its dry cleaning prices are competitive with area rates:$2.50for a man’s shirt$6for a woman’s blouse$29.99wash-dry-and-fold plans starting at a month for 20 pounds of laundry$99.99for 80 pounds 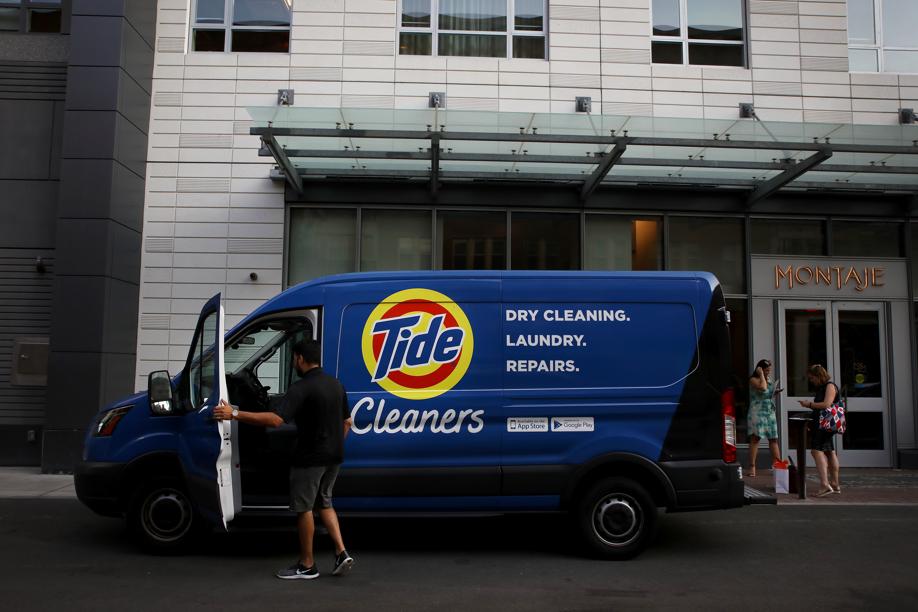 Tide Cleaners, new in the Boston area, allows people to put their dirty clothes into lockers and pick them up in 48 hours, laundered or dry cleaned. 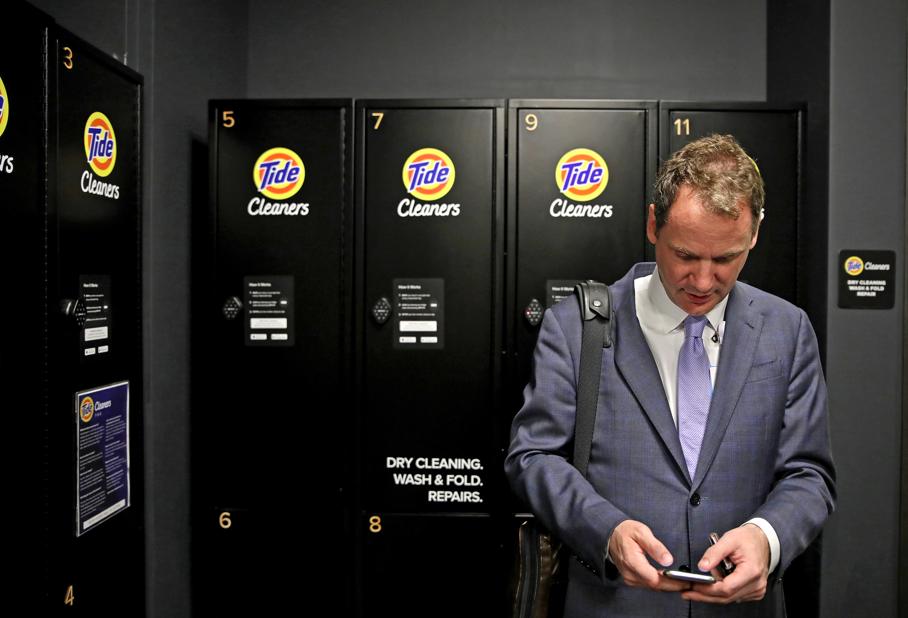 Alistair Erskine checked for his locker number via the Tide Cleaners phone application. The company has installed lockers in 42 residential buildings around Boston.

SOMERVILLE — For some, the word “laundry’’ might conjure images of freshly washed, neatly folded clothing. It evokes quite another image in my mind: A pile. A pile of dirty clothes overflowing from my hamper onto the floor. A pile of dry cleaning festering in my closet, awaiting its day of reckoning. Piles of clean laundry waiting, patiently, to be folded someday.

My laundry hamper is seven steps from my washing machine. So why is that chasm so hard for me to cross?

Pondering this question, I lugged my laundry and dry cleaning nearly 10 miles to Somerville recently and stuffed it into a locker. Why would I undertake such a journey? Because Tide, the laundry detergent brand with the signature orange packaging, is attempting to think outside the bottle. The company now wants to do your laundry for you. And I was happy to oblige.

For over 75 years, Tide has been the best-selling detergent on the market, used by some 40 million Americans a year. But its parent company, Procter & Gamble, is looking to the future, and the future can’t be bothered to pair up its socks. Millennials and Gen Z are less loyal to traditional detergent brands, market research has found, and they wear their clothing many more times before washing. And because they place a high value on their free time, they will outsource their chores to get more of it.

So the company has been exploring “out of home’’ options under the Tide Cleaners name. With the pithy slogan “Life, Not Laundry,’’ Tide now operates 140 dry cleaning stores in 19 states, and Tide University is cleaning students’ clothes at 23 colleges, including the Massachusetts Institute of Technology.

Last year, the company acquired the Chicago startup Pressbox, which had installed laundry lockers in five cities. Since March, Tide has placed branded lockers in 42 luxury apartment buildings around Boston, allowing­ residents to drop off their laundry 24/7. Garments are generally returned to the lockers in 48 hours, and the customer receives a notification via an app.

The company says its dry cleaning prices are competitive with area rates; about $2.50 for a man’s shirt and $6 for a woman’s blouse. (Don’t get me started on the pink tax for women’s dry cleaning.) And it offers wash-dry-and-fold plans starting at $29.99 a month for 20 pounds of laundry or $99.99 for 80 pounds.

You can expect another wave of lockers to arrive in the city over the next few months: Tide plans to be in more than 100 buildings by the end of 2019. The goal is to eventually place them in retail storefronts like supermarkets and convenience stores, akin to Amazon lockers, said Vijen Patel, who cofounded Pressbox and is now the chief executive at Tide Cleaners.

Tide isn’t actually doing the wash. In Boston, the company has contracted out to area wholesalers, who commit, Patel said, to “deliver the Tide promise.’’

As best I can tell, that means using Tide detergents and following the company’s protocols in terms of stain removal and spot cleaning.

Mary Scalco, chief executive of the Drycleaning & Laundry Institute, a national trade group, said there’s “nothing revolutionary’’ about Tide’s latest foray, as other dry cleaners have been offering delivery services and 24/7 lockers for their customers.

Tide’s difference, she said, “is they come with marketing dollars.’’

Which fills some local laundry and dry cleaning operators with dread.

Myeong Lowe, who has operated Utopia Cleaners in Arlington for three decades and acquired Sarni Cleaners in Boston last year, said Tide approached him about partnering as a wholesaler, but he couldn’t make the margins work. He’s nervous about the marketing that a company like P&G can put behind the Tide brand.

“It worries every small cleaner,’’ he said. “We’re not really equipped to fight with a bigger company.’’

A decade of business casual dress codes already has sent the dry cleaning business into a spin cycle, said Bruce Kahn, who has spent 31 years selling solvents to cleaners throughout the Northeast.

Why, he wondered, would Tide want to get into the game now and risk diluting the potency of its brand?

“People want Tide because of the brand name,’’ Kahn said. “To me it’s a huge mistake. We’re a declining industry.’’

P&G may actually have a larger goal in mind, said Howard Yu, author of “Leap: How to Thrive in a World Where Everything Can Be Copied.’’

“P&G has no direct consumer interface. They sell the detergent to e-commerce sites or retailers, then they lose the relationship,’’ Yu said. So Tide Cleaning is an opportunity for the company to collect data on its users and “keep itself relevant for the second half of the 21st century.’’

Add the consumer behavioral data the company is now collecting from smart appliances, and it creates a fuller picture of who we are and how we (attempt to) keep clean.

So does the service stack up?

After stuffing my skivvies in a locker, I queried fellow ­customers. Most said they liked the convenience of the lockers, and many acknowledged an affinity for the brand. Asked why he’d leave his suit in a locker, sportswriter Garrett Callahan, a first-time user, shrugged. “Tide is a big name,’’ he said.

Alistair Erskine, an executive at Partners HealthCare, had been using another dry-cleaning delivery service, but “it was like a black box’’ he said — he never got notifications when things were ready. He’s now using a Tide locker — which is an actual black box — two or three times a week. Checking out his Armani suit, he seemed impressed. “It looks good,’’ he said. “I’ll be sending my other suits.’’

When I returned to the locker a few days later, my shirts and dresses were clean and pressed, with a Post-it note on one item explaining how hard they’d tried to get an ink stain out of my husband’s button-down. (I should acknowledge that the company knew I was reporting on the service, since I needed its help to access a locker in a private apartment building at Assembly Row. That might mean they were extra diligent with my garments.) They dry cleaned his polo shirts and shorts, which was a bit unnecessary, but I could have told them not to.

And my dirty laundry was folded with Marie Kondo-like precision, the underwear neatly wrapped in tissue paper.

The verdict? Having a pristine stack of perfectly folded laundry is certainly preferable to my piles. But I’m still waiting for a locker in my laundry room.