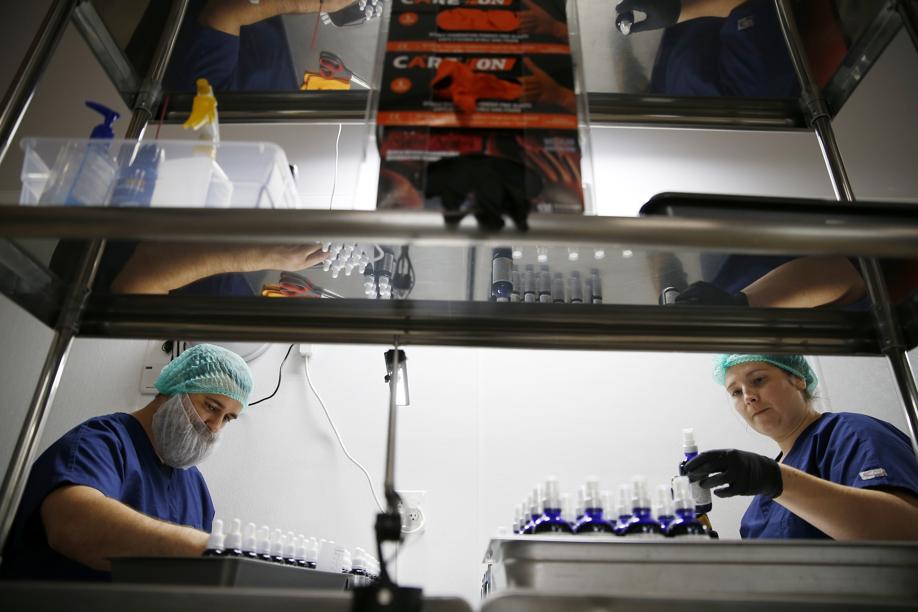 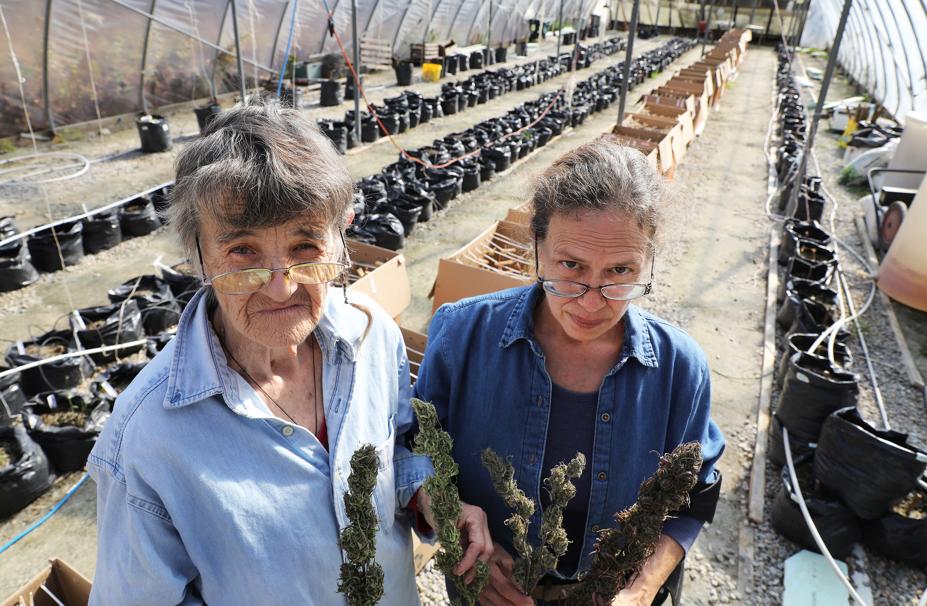 Kathleen Owens (left) and Linda Noel, who grow hemp at Terrapin Farm in Franklin, were angered by changes in state CBD regulations. 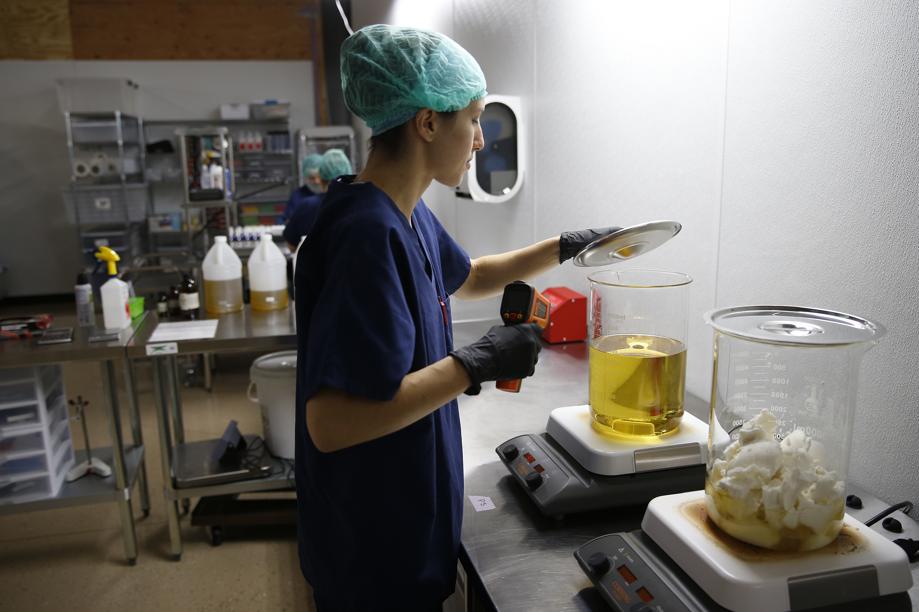 Julia Jerome, production manager, took the temperature of CBD salve at the Healing Rose manufacturing facility, which was recently expanded, in Newburyport.

LEICESTER — It was June and the seeds were already in the ground when the bad news came: State agricultural officials had, without warning, banned Massachusetts hemp farmers and processors from making or selling practically any edible product infused with hemp-derived cannabidiol, or CBD.

The edict was deemed a “policy statement’’ outlining the state’s interpretation of existing law. But to the owners of the state’s 104 licensed hemp farms, this was no mere clarification — it was a cataclysmic change that completely choked off the most lucrative market for their crops and upended their careful financial calculations for the 2019 growing season.

Now, farmers say, the disaster they warned of all summer is here: Tens of thousands of pounds of hemp harvested in the last few weeks and currently drying in barns across Massachusetts have nowhere to go, with edibles-makers sidelined and other buyers offering extremely low prices to use the crop as biomass for fuel or feed.

Lacking a financial incentive to process the plants into CBD and with state rules also banning exports and the sale of smokeable hemp flower, growers are bracing for ruin.

“Everybody is finishing the harvest, and none of us know what to do,’’ said Linda Noel, a longtime farmer in Franklin who said she was offered $100 per pound for her artisanal hemp crop instead of the $500 she expected or the $900-plus that premium, well-trimmed hemp might fetch in nearby Vermont, which has more liberal regulations. “The state keeps changing the rules halfway through the game. It’s insulting.’’

The rules governing hemp and CBD at both the federal and state level are complicated and seemingly contradictory.

The federal government in 2018 legalized hemp and hemp-derived CBD. But while the Food and Drug Administration has granted a British company approval to sell CBD — a component of both marijuana and hemp that doesn’t induce a strong high — as a prescription drug for seizure disorders, the agency has also said hemp-derived CBD cannot be added to food until it develops regulations, which could take years.

In Massachusetts, meanwhile, the 2016 ballot question legalizing recreational marijuana also legalized hemp, both in defiance of federal law. However, state agricultural officials say that with the federal government now assuming a more active role in regulating CBD, Massachusetts must align its policies with US law.

Meanwhile, edibles containing CBD derived from marijuana instead of hemp remain illegal under federal law but can be produced and sold in Massachusetts by recreational and medical marijuana companies licensed by the state Cannabis Control Commission.

At a hearing in Leicester last week, Noel and dozens of other distraught Massachusetts hemp farmers and CBD product manufacturers testified before the Legislature’s committee on cannabis policy.

With some choking back tears and others pounding the table in desperation, they implored lawmakers to pass legislation that would override the prohibition on CBD supplements and foods. They said Massachusetts lacks the mills and other facilities needed to turn hemp into clothing, rope, or building materials, leaving CBD as the only realistic option. Under current state policy, the compound can effectively be added only to topical products such as lotions, a far smaller market than edibles and supplements.

“You can’t tell us, ‘You can produce fields of hemp,’ and all of a sudden in a few weeks tell us, ‘We’re terribly sorry, but there’s a CBD component in your hemp and now you can’t sell it,’ ’’ a visibly angry Violet Hall, who grows hemp in Easthampton and Southwick, testified. “We’re not going to make it. We’re not going to have a home or food.’’

But there are few signs legislators intend to expedite votes on the hemp bills.

“We’re listening carefully and, based on all the facts and testimony and evidence, we’ll go from there,’’ said state Representative David Rogers, the committee’s cochairperson, who declined to put a timeline on moving the bills forward.

State Senator Sonia Chang-Diaz, the committee’s other cochairperson, said she was moved by the passion of the small-business owners who testified and said it was “unusual’’ that agriculture officials “circumvented’’ the typical regulatory process by issuing the CBD product ban without notice or hearing.

“In my experience in government, the worst feelings arise when people feel like they just can’t win no matter what — the feeling of being deceived, whether intentionally or not,’’ Chang-Diaz said after the hearing. “There’s a deep frustration here. I’m walking out carrying an impression of the intensity and the personal impact for people.’’

Ashley Randle, the state’s assistant agriculture commissioner, briefly addressed the crowd at the hearing, saying the state is hoping to get more guidance soon from the federal government.

“We don’t want to put our farmers at a competitive disadvantage,’’ Randle said. “We’re trying to find a legal pathway forward.’’

One could be forgiven for assuming CBD is already fully legal in Massachusetts; after all, gummies and other products containing the compound are widely available at ordinary retailers, including gas stations and convenience stores. CBD supplements, which purport to treat everything from headaches to joint inflammation to anxiety, have exploded into a multibillion-dollar industry.

But many municipal boards of health, which are charged with enforcing the state ban on CBD products sold outside of medical and recreational dispensaries, have declined to crack down on retailers.

While store owners may calculate it’s worth the risk of modest fines and the seizure of their CBD inventories, hemp farmers say they cannot similarly flout the law. If they did, the state might revoke their hemp-growing licenses, putting them out of business entirely. The only real effect of the policy, they argued, is to punish licensed Massachusetts businesses whose products are lab-tested, while allowing a broad illicit market of questionably-sourced CBD products to flourish.

“We’re left in the dust right now,’’ Ware hemp farmer William St. Croix told legislators. “Hemp is now a new black market boom. Why should we hand this over to an industry that doesn’t pay taxes? Why did we hand it to an industry that has zero scruples as to what the end user [consumes]?’’

“Now cut the compost and get to it!’’ St. Croix snapped at lawmakers as he stood up to conclude his testimony.

Those testifying Tuesday also lamented that licensed companies are allowed to produce and sell edibles infused with marijuana-derived CBD.

Processors, too, are affected by the CBD ban. Laura Beohner, owner of popular Massachusetts CBD brand The Healing Rose, said she tripled her overhead costs by moving into a larger manufacturing facility in Newburyport with new equipment for making edibles — two days before the state announced its ban. Today, the machines sit idle.

“We’re quickly losing sales to customers who can just order from out of state or go online,’’ Beohner said. “I’m the entrepreneur you want in your state — but I’ve seriously contemplated moving to Vermont or Maine because they have more sensible regulations.’’