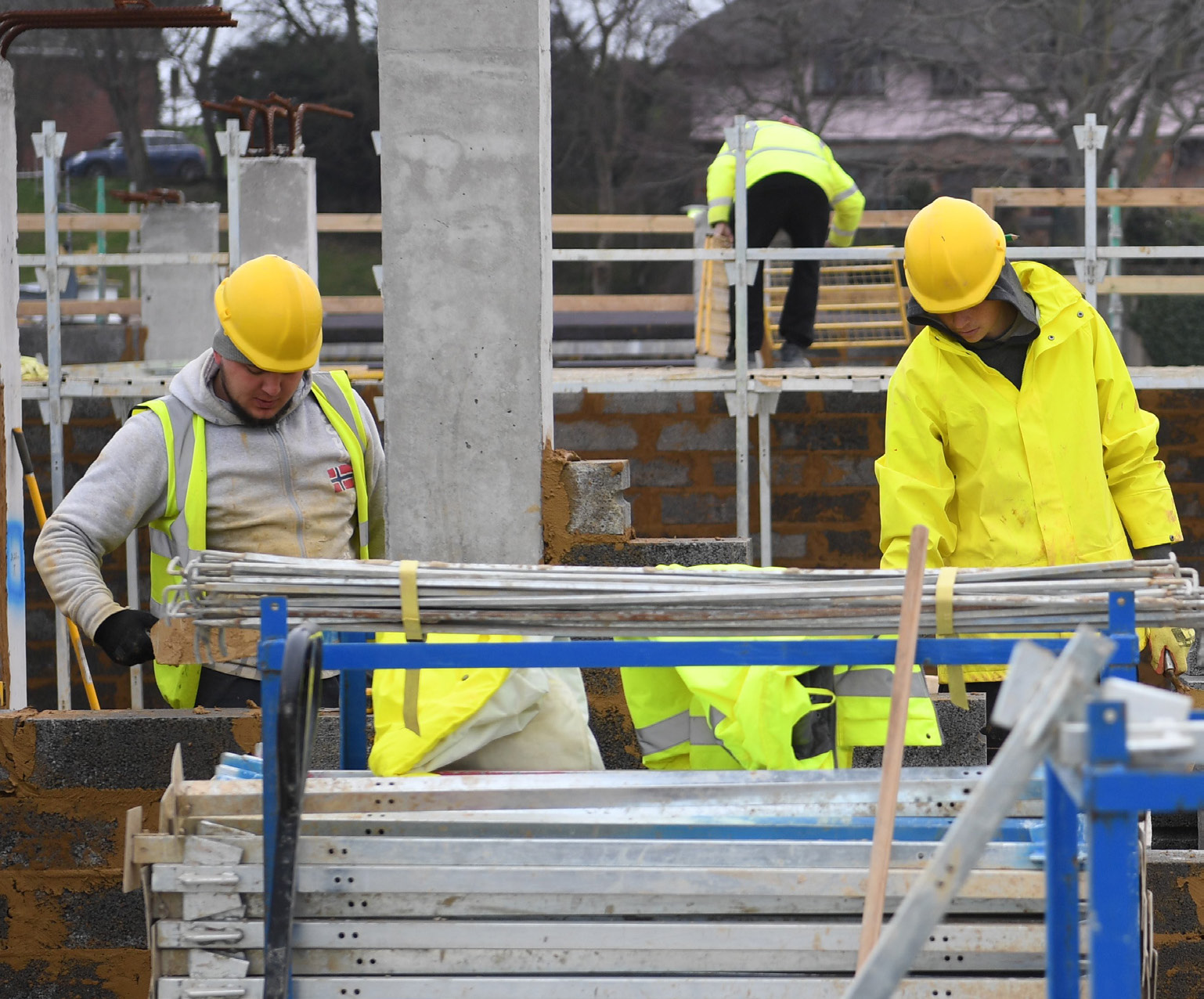 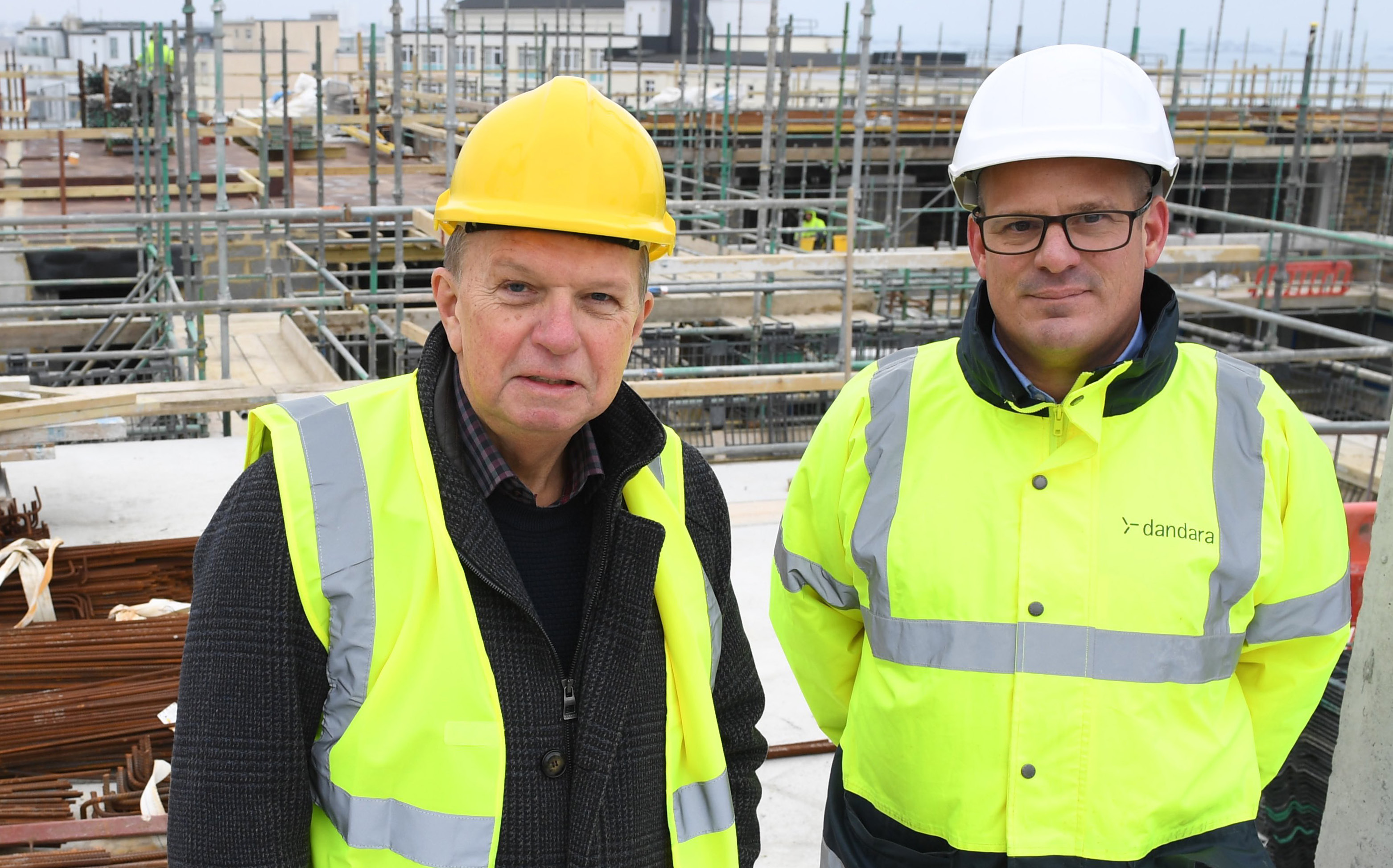 NEXT IMAGE
We must build a culture of safety throughout our construction sites
The Jersey Safety Council has launched a key behavioural safety programme for building workers. Chairman Steve Taylor, States health and safety inspector Tammy Fage and Dandara construction director Martin Smith told Ian Heath why it’s so important

‘‘ Construction has consistently remained the industry sector where somebody is most likely to get killed or injured while at work in Jersey... This programme is one of the most exciting developments that we’ve seen in years States health and safety inspector, Tammy Fage

ACCORDING to the Jersey Safety Council, around a million acts of dangerous behaviour take place on the Island’s building sites annually.

The JSC’s new Behavioural Safety Leadership Programme aims to change that by transforming attitudes within the industry from top to bottom.

Through the initiative, the council aims to train all site workers in the Island, so they become proactive in looking after each other rather than relying on supervisors and foremen to spot hazards.

This will mean changing attitudes so that workers pointing out dangerous behaviour to each other becomes the norm, and staff always ensure sites are safe for others to work on once they have left.

The JSC records around 100 to 120 shortterm injury-and-accident claims from construction workers each year throughout Jersey, which they say means there are around a million incidents of ‘at risk’ behaviours on site every 12 months.

This is clearly a statistic they want to change.

Tammy Fage, States health and safety inspector, has been working on the initiative with the council and leaders of the Island’s seven largest construction companies, who want all firms working on their sites to sign up to the programme.

She said that while standards have improved dramatically over the last two decades, there was still room for improvement in what is the Island’s most dangerous employment sector.

‘From my perspective, I’ve been working with the construction industry for over 22 years,’ she said.

‘We’ve seen an awful lot of changes and we’ve seen some really big improvements and that has been reflected in the accidental health data.

‘Over the years, we seen a steady decrease, but construction has consistently remained the industry sector where somebody is most likely to get killed or injured while at work in Jersey, despite all of the technological advances and new ways of working.

‘We’ve really seen a plateau in terms of the incidents within construction when we get to accident rates, so something needed to change.

‘This programme to me is one of the most exciting developments that we’ve seen for a number of years.’ She added: ‘It’s really exciting because actually I can’t remember when we had all of the big players, all of the really influential people within the construction sector, sitting around the table and really all committing to drawing a line in the sand and saying we are all going to apply a really common step change in the culture of our industry.’ Martin Smith, a director at Dandara, agreed that standards had improved dramatically since the turn of the century but still needed to improve.

‘When I first started back in 1998, we had to lock the gates to stop people going down the pub. They’d have breakfast and have a pint. That’s how much it’s changed,’ he said.

‘Hard hats at that stage were hard work to get people to wear. Going forward from that, there was more planning. The industry has changed dramatically since 1998 and for the better.’ He added that the key takeaway from the new programme for him was the focus on communicating health and safety issues within an organisation – building on the frameworks that are already in place.

‘The last four or five years, there’s not been too much change, certainly at Dandara.

‘The difference with this course is it’s about communication really, not just having the systems in place. It’s about getting the systems heard and driving up enthusiasm about safety.

‘Rather than it being a by-product, it was about safety becoming one of the main goals.’ Mr Taylor said that his experience working for different companies in the oil industry had taught him first-hand the difference the right approach to safety can make within hazardous workplaces.

‘I came from the oil industry on the exploration and production side, which is a high risk part of the business,’ he said.

‘When I was at Shell it had a culture that had a very strong behavioural safety leadership element to it, with a certain set of attitudes and ways of looking at safety and the behaviours around safety.

‘When I left Shell, I joined another company which rather than learning when things went wrong and encouraging people to speak up, it went for blame, finger-pointing and punishment.

‘That company realised, thankfully, that their safety culture was very poor and they put a massive change programme in place, which required a lot of leadership and a lot of energy from the senior leaders in the organisation to drive through.’ He added that a number of benefits had stemmed from the changes in that company’s behaviour, not least a boost in staff morale.

‘The impact of it was significant in three ways. Firstly, the safety performance dramatically increased,’ he said.

‘Secondly, the business performance improved because there were fewer incidents and accidents and deviations.

‘And thirdly, the staff morale was a lot better because they were being listened to.

‘What they said was being actioned rather than them just being told to shut up and go away or being sacked, if something went wrong.

‘I brought that culture with me to Jersey when I came to live here in 2014 and I joined the safety council.’ Mr Smith added that while there were likely business benefits from improved safety, the key objective was protection of staff.

‘We employ over 300 guys and if we can reduce accidents from our workplace that’s brilliant,’ he said.

‘Finances for us haven’t really come into this. It’s the right thing to do for our guys.

‘There’s been studies saying that obvi- ously accidents are very expensive, but the reason we’re doing it is not financial, it’s to protect our guys.

‘I’d hope that’s the benefit that comes from this above all else, as opposed to any other reason for it being done.’ For Mrs Fage it is as simple as transferring the standard everyday behaviours people have for the wellbeing of others on to construction sites.

‘The most profound thing to me is that accidents on sites nearly always happen in the presence of other workers. Why does that happen?’ she said.

‘In terms of construction sites, practically every day why are there so many obviously high-risk behaviours that we see? ‘If you were walking on the road and you saw someone climb onto the handrail of a bridge with the clear intention of jumping off and killing themselves, most people would instinctively stop and try and encourage them down.

‘You might talk to them, you might seek assistance from somebody else. And yet we go to a construction site and see people putting themselves at risk of death and serious injury and nobody steps in.’ She added: ‘I find it difficult to understand why we would instinctively stop someone that we don’t know from jumping off a bridge and yet we don’t do it in the workplace.

‘That’s what we and our colleagues are working around – that conundrum.

‘What this programme for me is starting to do is just giving people the confidence to actually start looking at what they are doing and why they are doing it. And to think, actually, we can influence it by setting targets.

‘We’re empowering people to have those conversations.

‘It’s shifting the attitude from I’m dobbing somebody in to we want to create a safer workplace.’ Companies can sign up or register with the Behavioural Safety Leadership Programme by visiting the Jersey Safety Council website at jsc.je Once they are registered, they will be invited to participate in training events.

The Jersey Safety Council wants all construction related companies to ‘engage and be part of the change’.

•To develop an understanding of personal behavioural safety leadership responsibilities, irrespective of an individual’s role