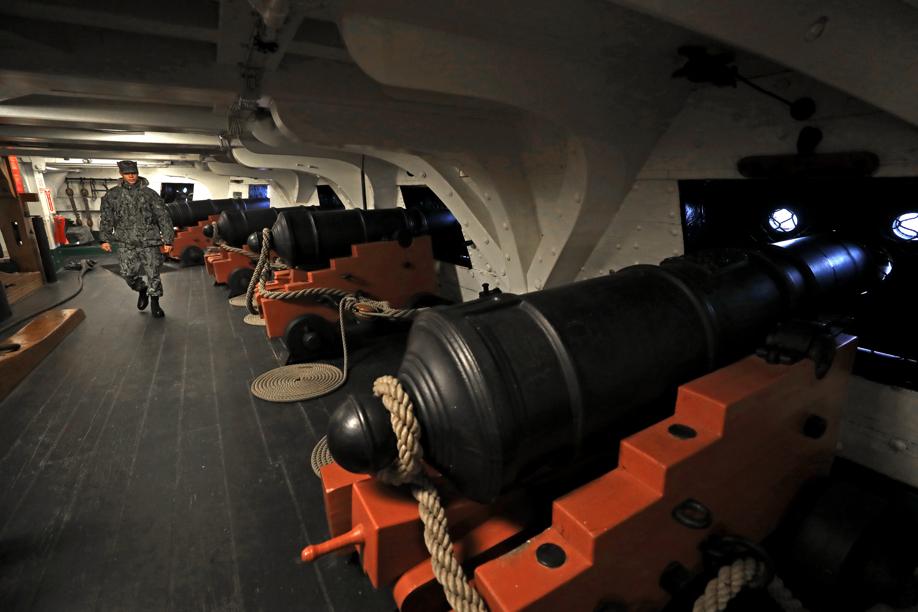 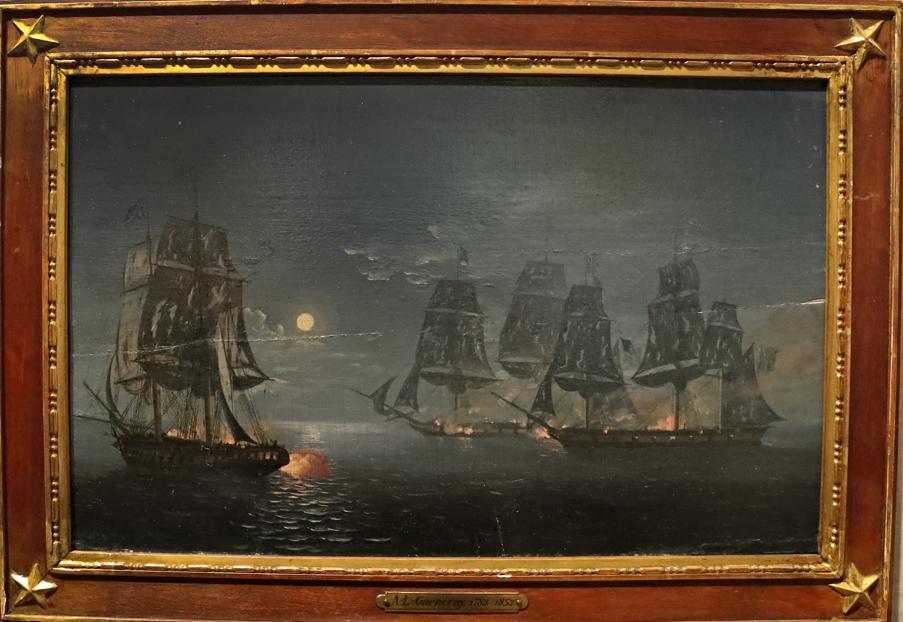 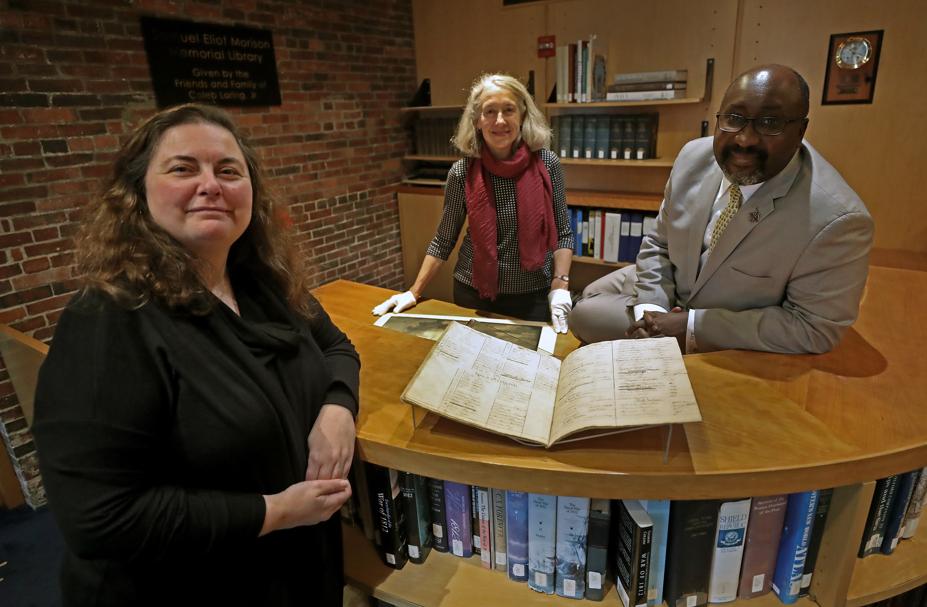 While on the ship as a child, David Debias would have spent time below decks bringing powder to the men firing cannons.From left, Sarah Watkins, Anne Grimes Rand, and Rashaun Martin of the Constitution Museum. Watkins said she and other staff continue to research the life of David Debias.

David Debias passed explosives to the thundering guns of the USS Constitution on the night of Feb. 20, 1815. He heard the muskets of US Marines in the masts, watched razor-sharp splinters gash his comrades, and basked in the Constitution’s resounding victory over two British warships in its final battle, 180 miles southwest of Gibraltar.

Debias was from Beacon Hill. He was 8 years old. And he was a free Black, fighting for his young country.

The story of the youngest known veteran of the famed warship won’t be found in traditional US narratives of the 19th century, when the vast majority of Black Americans were consigned to slavery and impenetrable anonymity. His story might have been lost to history entirely if not for the dogged research of a Vietnam veteran who commanded the Constitution in the 1970s and feels bound to honor its past.

It’s a remarkable saga now given its due at the USS Constitution Museum, where his combat service is being celebrated for visitors who might not have realized that dozens of Black men and boys helped man the Constitution’s guns, handled its sails, and bled like other sailors who fought in the War of 1812.

It’s a story of “the right side of history,’’ said Rashaun Martin, a life trustee of the museum and Boston Public Schools administrator. "It’s a story of someone who was an equal counterpart to his fellow Navy men at the time.’’

Martin works on staff diversity and retention for the Boston schools, and Debias’s story strikes him as an inspiration for young students of color. Here is another child, who looked like them, playing a hero’s role in a long-ago world washed white in the history books.

“He’s been a favorite,’’ said Anne Grimes Rand, president of the museum, which features Debias in an exhibit of life aboard the Constitution and also in a summer program for children 8 to 10 years old.

Debias shipped across the Atlantic with Captain Charles Stewart and about 450 other crew members, hunting for British commercial vessels and enemy men-of-war. Debias was brought by his father from Beacon Hill, whose north slope was then a poor and largely Black neighborhood, to step aboard the Constitution on Dec. 17, 1814.

He wasn’t a sailor but a servant assigned to Master’s Mate Nathaniel G. Leighton. However like others on the crew who had never been to sea, he performed a motley mix of grunt work to keep the Constitution humming — shuttling messages, scrubbing decks, and learning to pass powder to shouting, sweating cannon teams that needed to fire quickly, accurately, and often.

Only two months later, Debias faced a baptism by fire when the Constitution engaged two ships at once — the HMS Cyane and HMS Levant. Undefeated and famous following earlier victories over the HMS Guerriere and HMS Java, the Constitution under Stewart’s command outmaneuvered and ripped apart the two smaller warships in an evening battle.

“He outpowered them, and he knew how to do it. He split them up basically,’’ said Tyrone Martin, 89, who commanded the Constitution from 1974 to 1978 and found records naming Debias among a mountain of obscure Navy documents.

Martin, a Navy veteran of the Korean and Vietnam wars, uncovered Debias as part of his efforts, begun years ago, to find as many of Constitution’s crew as possible. He’s up to 15,600 names, and the young Bostonian was among those who stood out.

“Every once in a while, you hit one that’s a little bit different and a little bit of an eye-catcher,’’ said Martin, who lives in Tryon, N.C.

The discoveries were only beginning. Further research showed that Debias had been placed aboard the Levant after the battle, part of an American crew to bring the captured ship back to the United States as a prize.

But en route, the Levant was recaptured in the Cape Verde islands by the British, who kept Debias and the other Americans as prisoners in Barbados, Martin said. They were confined on the island until May, when news arrived that peace had been declared two months earlier.

Debias made his way to Baltimore and then to New York, where he rejoined the Constitution. Once back in Boston, Debias was reunited with his father, who collected $31.98 — the equivalent of roughly $550 today — for his young son’s seven months of service.

Debias went on to a career aboard merchant vessels until he rejoined the Constitution from 1821 to 1824 for service in the Mediterranean, where the flagship of a US squadron visited such ports as Malaga, Genoa, Naples, Algiers, and Malta. He then returned to private vessels for a long career at sea, including a visit to Mobile, Ala., in 1838.

It’s not clear why, but Debias traveled from there to Winchester, Miss., where he was arrested as a suspected runaway slave. Local lawyer Thomas Falconer believed Debias’s declarations that he was a free man and petitioned the secretary of the Navy to certify that belief before a court trial began May 2.

“He is a stranger in a strange land, and from the rigidness of the law in the absence of testimony may be deprived of his liberty,’’ Falconer wrote to Navy Secretary Mahlon Dickerson in a letter uncovered by Martin.

Dickerson confirmed Debias’s service in a reply dated April 17, 1838. But whether that reached Mississippi by May 2 is unclear. Rashaun Martin, the USS Constitution Museum trustee, fears it arrived too late, with tragic consequences. No later records of Debias have been found.

“Even if he was released on his own recognizance, I just don’t fathom there’s any way he was able to get back to the right side of the Mason-Dixon Line," said Martin, who once led the history department at Boston Latin School. “He may have been recaptured as a runaway and finished out his days as a slave somewhere in the South.’’

If that was the brutal last chapter to Debias’s story, his journey — from the gun deck of America’s most famous fighting ship to a slave auction block — would encompass the country’s best and worst, said Coleman Nee, former state secretary of veterans’ services.

Sarah Watkins, vice president of the nonprofit USS Constitution Museum, said she and other staff continue to research Debias in the hope they’ll find later traces of his life.

The Mississippi courthouse where he was scheduled to be tried burned down long ago, but tantalizing clues have surfaced.

James Bennett, an educator at the museum, found records of a Black man named David Bias living in Westhampton beginning in 1825. Bias’s son-in-law and grandson fought for the Union in the Civil War.

If Bias indeed is the Constitution veteran, Nee said, “that would be one of the longest African-American military lineages in the country’s history.’’

Watkins pledged that the search would continue.

“History mysteries are what drive us to learn more," Watkins said. “Each time we learn something, it leads to more questions.’’

They include questions about an 8-year-old boy, a child of Boston who fought for his country and whose ultimate fate is still to be discovered.

Brian MacQuarrie can be reached at brian.macquarrie@ globe.com.