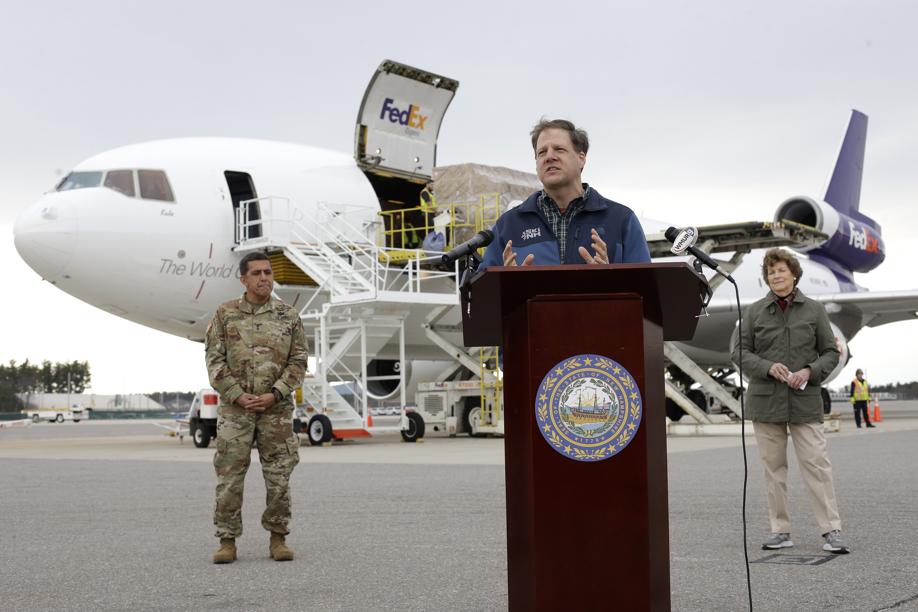 N.H. Governor Chris Sununu spoke at a news conference upon the arrival of equipment.

A plane carrying more than 6 million pieces of protective equipment, purchased from China to fight the spread of the coronavirus, arrived in Manchester, N.H., on Sunday afternoon, New Hampshire officials said.

The 91,000-pound shipment, secured with the help of acclaimed inventor Dean Kamen, arrived on a FedEx plane after departing Shanghai on Saturday night, officials said during a press conference at the Manchester-Boston Regional Airport.

“We’re going to get it out the door as fast as we can," Sununu said during the televised conference. "We’re going to fill our stockpiles, and at the end of the day, truly live up to the commitment that we have stated — that everyone that needs PPE in the state is going to have PPE.’’

The state will pay about $5 million for the supplies, originally purchased by Kamen, Sununu said. He added that he hoped the delivery would be the first of many.

“We’re in this for the long haul,’’ he said. “As much as this is on this plane, were still going to need more.’’

Kamen, a New Hampshire resident who is best known for inventing the Segway, thanked several people for their help, including Sununu, Senator Jeanne Shaheen, and FedEx founder Frederick Smith.

Kamen said there were several obstacles in securing the shipment, including rapidly changing regulations in China, ever increasing demand, and requirements from the federal government. He eventually decided to foot the bill for the shipment after the federal government said they were unable to purchase the Chinese goods before seeing the supplies.

“Great, it’s too risky for the United States government and the New Hampshire government so I put it up," he said. "But I trust the governor, I trust our senator, and we made this long-distance handshake.’’

Shaheen, who was also present at the press conference, said the arrival of the supplies was a great example of collaboration between the private and public sectors, as well as among state, local, and federal authorities. She also thanked New Hampshire’s essential workers, including truck drivers, grocery store employees, and health care workers, for helping the state continue to function.

“This is the season of Easter and Passover,’’ she said. “It’s a time of hope and renewal. [F]or all of those people who are affected with COVID-19, this could be the difference between success and failure, and, dealing with this pandemic, between life and death.’’

Distribution of supplies will begin immediately on a need-basis, Sununu said. A census that was distributed to health care facilities across the state will help determine where supplies are sent.

Some of the equipment will also go to neighboring states, he said. Already, he has begun working with the governors of Vermont and Maine.

Kamen is not the first philanthropist to use his influence to deliver protective gear during the coronavirus pandemic. At the beginning of April, the Kraft family used the New England Patriots team plane to deliver about 1 million masks from China to Massachusetts. Governor Charlie Baker reached out to the Krafts after a shipment of more than 3 million masks was confiscated by the US government.

Abigail Feldman can be reached at aigail.feldman@globe.com.