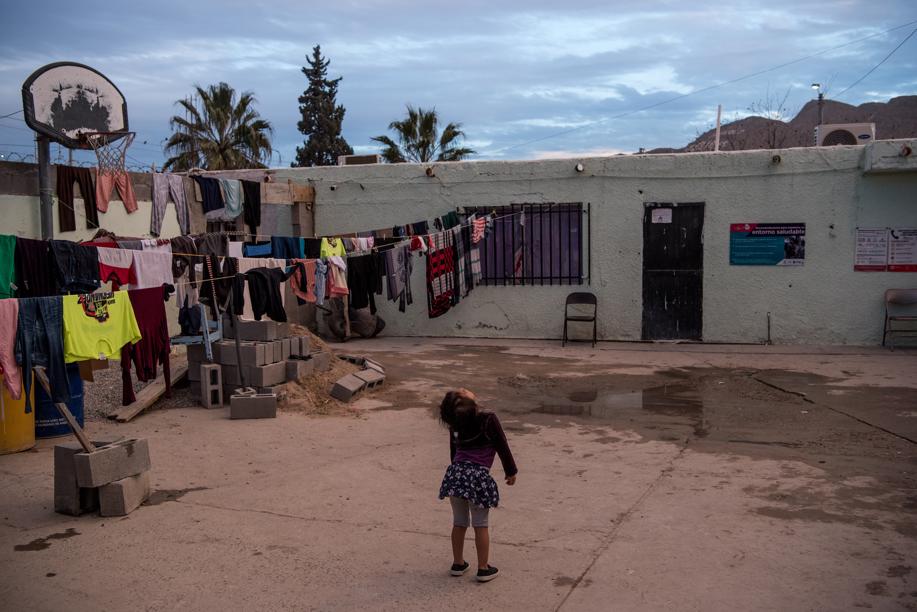 Samantha, 3, who arrived with her mother from Ecuador a month ago, watched an airplane pass at the Good Samaritan migrant shelter in Ciudad Juárez, Mexico.

CIUDAD JUÁREZ, Mexico — At first, the people at the Good Samaritan migrant shelter who have had few reasons to cheer did precisely that. With news that many of them could soon be on their way to the United States, they applauded and embraced in the outdoor plaza, where sagging clotheslines intrude onto the basketball court.

The adults waited for more details as their children rode exuberantly around the courtyard in the shelter equivalent of Radio Flyers: milk-crate wagons. Hours later, they got more news: Nothing had changed. The stringent Trump administration border policy that has kept thousands of asylum-seekers trapped in Mexico would keep them waiting a while longer.

“I feel overwhelmed right now,’’ said Adela Abigail Castillo de Moreira, an asylum-seeker from El Salvador who has been waiting in Ciudad Juárez for a month.

A federal appeals court decision Friday that could upend the border policy created a chaotic day for thousands of migrants in Mexico’s border cities — at Good Samaritan and other shelters in Ciudad Juárez, at the international bridges and ports of entry in Tijuana and Matamoros.

The Ninth Circuit Court of Appeals in San Francisco found that the so-called “Remain in Mexico’’ policy was legally invalid, a ruling that prompted the initial cheering at Good Samaritan. The policy has forced migrants to wait in Mexico for months while their asylum cases are reviewed. Many migrants believed that the ruling meant that the wait was over and they could cross into the United States, an option that is currently limited to those who are escorted temporarily into the country for brief immigration-court hearings. By the end of the night, the court stayed its ruling. And in the meantime, confusion reigned.

The chaotic, up-again, down-again day was emblematic of the emotional turmoil many migrants are facing on the Mexican border. Hundreds of thousands have fled deep poverty and violence in Central America and other nations over the past two years, only to encounter an escalating series of policies put into place by the Trump administration that have thwarted their attempts to seek asylum in the United States. More than 59,000 migrants have been turned back at the border under the “Remain in Mexico’’ policy.

Migrants gathered Friday evening at border crossings. Some tried to cross and were turned away. Some stayed put at shelters and tent encampments, debating what to do.

Late in the evening, as the crowds of migrants swelled and a few border bridges were closed, the news that the court’s ruling had been temporarily stayed arrived, dimming hopes once more.

In Tijuana, about 50 asylum-seekers marched to the port of entry, singing about winning asylum and helping one another carry their luggage. Many held copies of the appeals court’s decision in their hands. But the court’s stay occurred just as they reached the port. Many had given up their shelter beds and had arrived at the port with all of their belongings, so they waited late into the evening at the closed gates because they had nowhere else to go.

At the Good Samaritan shelter in Ciudad Juárez, Pedro Luis Ruiz Tamayo, 50, did what he has been doing for 10 months: He waited. Tamayo, who is from Havana, Cuba, had no intention of rushing to a bridge. He said he had been following President Trump’s Twitter feed, and since the president had posted nothing about the decision, he figured he would be turned away. His second interview for his asylum case was scheduled for June 16, so his plan was to simply wait until then.

“I tell the other immigrants that they have to be patient because this is not final,’’ Tamayo said.

He was one of 110 asylum-seekers from nine countries who have been waiting at Good Samaritan. Almost half were from Brazil. They sleep on bunk beds in dorm rooms and, when Mass is not being held, inside the small church. For Tamayo and the others, days of uncertainty and legal maneuvering they barely understood were nothing new.

“I came here to ask for asylum to the US, not to Mexico,’’ Tamayo said. “I’ve never seen, in any part of the world, that you ask for asylum in a country and they send you to a third country.’’

They ate quietly in the church by the mats on the floor where they sleep. They spoke of being afraid to venture beyond the shelter at night because criminals prey on them and their children. They traded messages on WhatsApp with migrants at other shelters. They watched their children bounce a tire attached to a rope on the concrete. They waited.