The dangerous pursuit of safety
Being careful with the coronavirus is one thing. But if we refuse to resume activities until we're sure they're 'safe,' we could lose far too much. 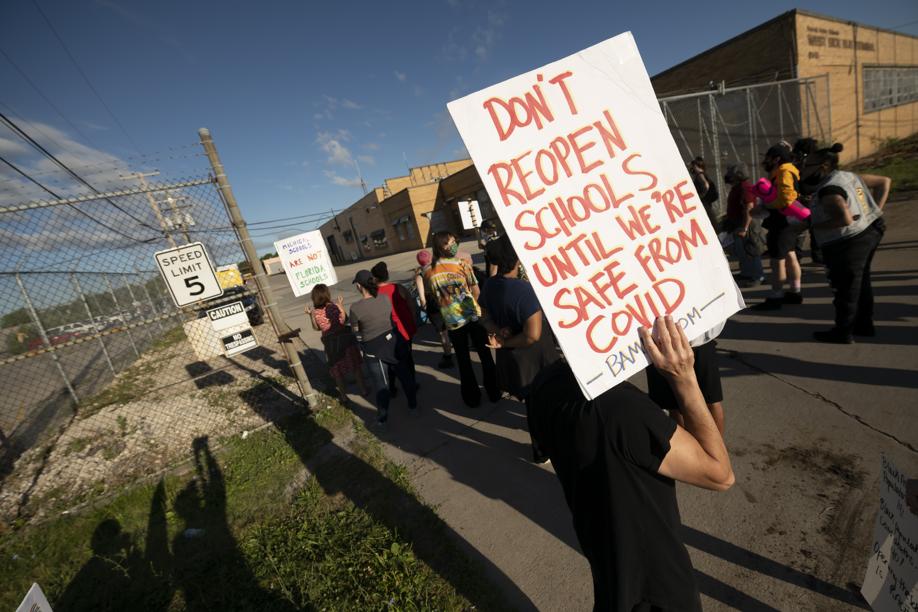 Demonstrators blocked the driveway of a school bus terminal to keep the buses from running on the first day of summer school in Detroit on July 13.

NEXT IMAGE
By Jay Samons

For many years I have given a lecture at Boston University about the fall of the Roman Republic and the creation of the Roman Empire. While the ostensible purpose of this lecture is to provide historical background for the study of Virgil’s “Aeneid,’’ the real purpose of the talk is to help students understand why the Romans gave up their free, republican government after five centuries and accepted the authoritarian rule of an emperor.

The answer is fairly simple. Roman Italy had been wracked by a century of civil war and civic violence. From 133 BC to about 30 BC, the Roman state seemed on the verge of dissolution. Thousands upon thousands of Romans had died, mainly at the hands of other Romans, while the economy was convulsed and the provinces were despoiled by taxation and capricious governors. Roman statesmen-generals turned on their enemies and brought their armies into the capital and then executed their opponents by the hundreds. Leaders ignored Roman law and tradition in order to empower themselves and crush their political foes; legislative and electoral procedures were violated or flouted; families were expelled from their farms for being on the wrong side of a dispute and then saw their lands handed over to partisans of the opposing side; secret or open factions of a few leaders were able to block constitutional measures, put their cronies into power, or utilize armed gangs to intimidate and assassinate their opponents.

After all that, the Romans ultimately determined that the rule of one man was preferable to republican government because it would end civic violence, political strife, and economic chaos. So the Romans turned over power to Augustus Caesar, who maintained parts of the old republican system in form while in fact laying the foundation for an imperial monarchy that ruled the western Mediterranean for 500 years and the eastern for 1,500.

The Romans resigned themselves to a kind of deal: Put simply, they gave up their liberty in exchange for security. And this underscores a fact that has been little discussed in the current crisis in the western world. In a popular government — in a regime where the people play an important role in selecting leaders and holding them to account and in which they enjoy certain privileges or rights they earn through duties — freedom and security tend to exist in inverse proportions. If people feel very secure, then they are almost certainly not very free. If they feel very free, they are almost certainly not very secure.

Virtually all legislation passed or executive orders issued in such societies represent either an attempt to increase security and limit freedom, or an attempt to increase liberty and decrease safety. While this trade-off has been made extremely obvious in the last few months, the phenomenon has had clear precursors — from the way airline security has reduced the ease of travel to the cameras that track our speed on public roads. Western societies have increasingly chosen to accept limitations on freedom in exchange for security.

I want to suggest, however, that this exchange has never been offered at a price nearly so high as what we have paid this spring and summer and may be asked to pay again this winter.

We have seen, in the last four months, the literal “lockdown’’ — note even the terminology used and accepted by the public — of law-abiding citizens, who have been told that they had to endure a kind of soft house arrest in an effort to gain safety and security in the face of a virus. Indeed, some have gone so far as to argue that even more draconian measures — such as those apparently imposed in parts of China — would have been warranted.

Early in the COVID-19 outbreak, before the nature of the virus was better understood, “lockdowns’’ could be and were justified as a temporary expedient in the face of a deadly threat. But once we “flattened the curve’’ to prevent hospitals from being overwhelmed, something strange happened: As studies began to hint and then to show that the virus was not as deadly as originally feared — current figures from the Centers for Disease Control and Prevention put the infection fatality rate at about 0.65 percent — and as it became clear that it attacked the aged, the infirm, and those with compromised immunity with far more vehemence than younger, healthier individuals, the goals of public health measures like lockdowns and the closures of schools changed. Instead of preventing the overwhelming of hospitals, the focus moved to stopping the “spread of the disease.’’

Hospital admissions and deaths took a back seat to reports of increasing numbers of cases, an arguably misleading term in that it reflects positive tests rather than individuals who are actually ill. And as more and more younger and healthier people test positive for the virus — individuals at a much lower risk of hospitalization or death — the significance of “cases’’ as an indicator of the pandemic’s severity shrinks. In short, as the original justification for sacrificing individual liberty began to disappear, new arguments appeared to underscore the need for continued restrictions on public activity. Indeed, it is not uncommon now to hear it said that life cannot return to normal (even to a “new’’ normal) until an effective vaccine has been developed, tested, and distributed.

Yet deaths and severe illnesses from a virus are not the only risks a society runs. Economic downturns take lives and destroy families. Restrictions on movement prevent check-ups and treatments that prevent deaths from numerous other health threats, as more recent studies have begun to suggest. And thus the current, continued emphasis on public “safety’’ — which is being defined narrowly, to mean reducing positive COVID-19 tests as opposed to (say) protecting the most vulnerable — has encouraged public officials and American citizens to discard a principle crucial to any free society: namely, that liberty is both dangerous and precious. Precious in every sense of the word. It is rare. It is expensive. To be blunt: It costs lives. Indeed, the only currency in which freedom has ever been purchased in human history is human blood. Given that fact, we may have to accept the fact that this virus will continue to cause some deaths and that we therefore should not expect to be “safe’’ from it, because we maintain that freedom should be more dear to us than safety.

I’m not suggesting that life should simply “go back to normal’’ and that we should cease to take protective measures, especially for those particularly vulnerable. But the standard of “safety’’ deserves to be banished or, at the very least, weighed against the notion of compromised liberty. “Safety’’ is simply not a reasonable goal for a free society. We are not “safe’’ driving our cars. We are not “safe’’ from cancer, or stroke, or heart disease, or numerous other killers that strike without any warning. We have vaccines now for various forms of the flu but we are not “safe’’ from it, given that 30,000 to 60,000 people die from it each year in the United States. There is no reason to believe that a vaccine for COVID-19 will make us “safe.’’ Some people will not take the vaccine and for others it will be ineffective.

Of course, I support trying to protect those particularly susceptible to harm from this virus, and individuals should take responsible steps to avoid infecting themselves and others. But I am suggesting that trying to achieve actual “safety,’’ as opposed to simply being prudent, is both impossible and carries with it a huge cost — the loss of our liberty, the loss of our dignity, and the loss of some measure of our sober judgment. Rational individuals understand that virtually every act entails some kind of risk, and we accept those risks every day of our lives. We don’t live as if we are likely to die at any moment (from cancer or a car accident or a gunshot); we live as if we know that the risks inherent in life and liberty are far outweighed by life’s joys and opportunities.

Some leaders and writers have compared the current crisis to previous wars or battles, and as a historian I find this approach particularly misleading and ironic. First, a virus is not a rational force that can be fairly analogized to the enemy in a military engagement. Second, if one does wish to use a military analogy, it would have to be admitted that wars are fought when the party attacked decides that accepting casualties is preferable to living under oppression and fear. In this case, we have decided to live under fear. We are engaged in the greatest act of cultural surrender in human history. One cannot fight a war by trying to ensure that the smallest number of people possible will die. Freedom costs lives, and all of us need to be far more frank about and accept the fact that, unless we choose to destroy our own culture, more people are going to die from this virus. Maybe a lot more people.

Americans and others who have adopted popular governments have faced deadly crises before. Many people have died in the effort to secure the liberties that we have previously enjoyed. If we continue to surrender those liberties, and if we do so because we fear that some of us may die as our forebears did, we have betrayed both the ancestors who established our freedom and our descendants who will never enjoy it.

Jay Samons is a professor of classics at Boston University and vice president for strategic initiatives at The American College of Greece.