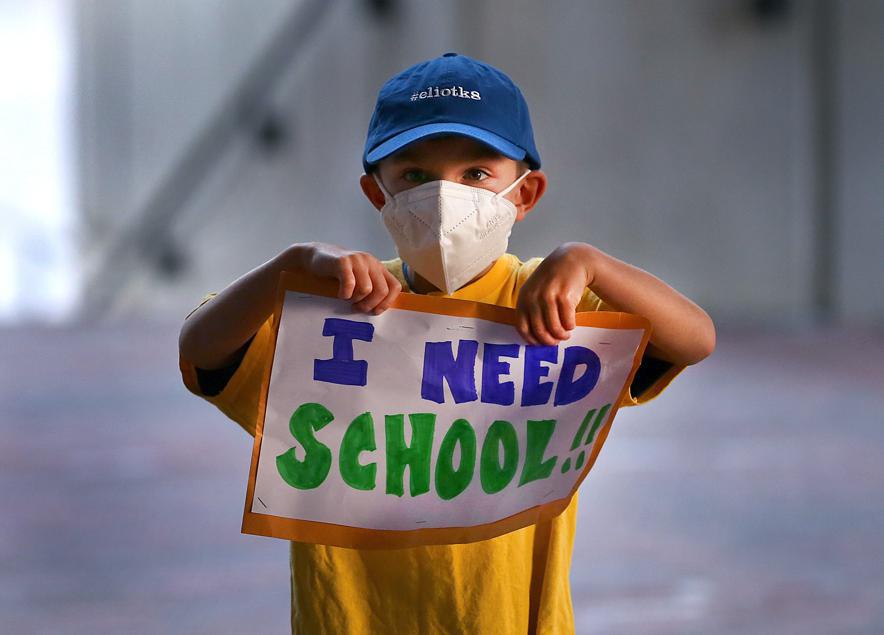 Simon Castro, 7, a special-education student from Charlestown, held a sign during a press briefing outside Boston City Hall in October.

Massachusetts education officials are intervening in an increasingly tense debate between parents of students with disabilities and school leaders in Boston, Worcester, and Springfield, ordering officials in those cities to reopen classrooms as quickly as possible.

State officials instructed local leaders to provide comprehensive information on whether students with disabilities are accessing education in their homes on a daily basis. If the responses are unsatisfactory, the state will audit the district’s learning plans to determine whether officials are doing enough to meet their legal obligations to serve those students.

“For these particularly vulnerable groups of students, it is vital to have a plan for providing in-person instruction as soon as possible,’’ Jeffrey Riley, the commissioner of elementary and secondary education, wrote last Monday in letters to the districts, giving them 10 days to respond. The state released the letters on Friday.

Students with disabilities have been among the hardest hit by the school closures that began nearly nine months ago at the start of the pandemic. Parents have shared heart-wrenching stories of children suffering devastating regressions that could take a year or longer to recover from because school officials have not provided required services. Growing research is identifying similar losses.

Boston, Worcester, and Springfield — the state’s three largest school systems — collectively serve about 22,000 students with disabilities, but it’s doubtful that all those students would return. Some students with special needs are finding success with remote learning, while others are worried about potential exposure to the coronavirus.

Boston currently is providing in-person learning for fewer than 200 students at four schools, representing less than 1 percent of its more than 51,000 students. Springfield and Worcester are not educating any students in person, according to the state.

“I’m grateful someone is fighting for these kids and not putting them on the back burner, which is what local officials appear to be doing,’’ said Alicia Piedalue of Boston, who has seen her 11-year-old son experience significant regression. In some instances, she said, he now requires the supports, such as flash cards and charts, he used two years ago.

Other parents faulted Riley’s efforts as lackluster and questioned the need for an audit when it’s clear that many students are not getting the services outlined in their individual education plans.

Riley did not specify in his letters when he would like classrooms to reopen. But with the holiday break less than three weeks away, it appears increasingly unlikely that students will return before January.

Local school officials, who have repeatedly emphasized they want to bring students back to classrooms, have argued that conditions are not right for a safe return yet, citing rising coronavirus cases in their communities and ongoing work to improve school ventilation.

Springfield Mayor Domenic Sarno, who chairs the city’s School Committee, immediately rebuffed the commissioner’s pressure to reopen schools, saying he would not allow students with disabilities to return to classrooms until it was safe for all students to return.

“Once we are assured all buildings are safe and sound, then we will be ready to bring students and staff back into the buildings. But not a moment before that,’’ he said in a statement, noting that the coronavirus is ripping through the city. “The numbers are trending in the wrong direction at this point in time. We do not want to introduce more risk.’’

In Boston, the debate over reopening schools shifted into higher gear this past week. Parents of students with disabilities rallied at City Hall Wednesday. The Boston Teachers Union also warned its members that reopening special education classrooms was imminent and it would likely involve 28 schools.

Boston school officials, however, would not make any commitments Friday on when they will open more schools.

“We are committed to doing it right and getting the buildings open for these students who we know from conversations and research aren’t able to access the same level of services and education on-screen as they can in person,’’ said Jonathan Palumbo, a Boston Public Schools spokesman. “We are reviewing all the city’s metrics in regard to public health and looking at what the different options would be.’’

Palumbo said the district would like to scale up the safety measures at the four schools that are currently open, including an increase in COVID-19 testing and contact tracing if necessary.

With each day that students with disabilities remain shut out of classrooms and denied services in their homes, the likelihood of litigation increases, experts say. Under state and federal laws, those students are legally entitled to a free and appropriate public education — in the least restrictive environment.

Meanwhile, state officials who are pressing districts to reopen classrooms have repeatedly emphasized research and data showing coronavirus transmission rates in schools have been low.

Elizabeth McIntyre, a senior attorney with the organization, said she appreciated Riley’s desire to help students but said his efforts fell short, particularly in providing districts with the support and resources they need to open schools. Ultimately, both the state and districts are failing to meet their legal obligations to students with disabilities and are needlessly creating long-lasting harm. Her group is now contemplating next steps.

“There is a group of kids with complex disabilities who just can’t access school through a computer, and they are not getting’’ a free and appropriate public education, she said. “It’s disgraceful.’’

Kelsey Brendel of Boston, whose 6-year-old son is a first-grader with severe developmental delays and profound medical complications, said she is tired of hearing public officials speak for months with apparent good intentions about bringing students back and then repeatedly delaying the plans.

“Our children are literally deteriorating in front of our eyes,’’ she said, noting her son needs to learn how to walk again. “It’s heart-breaking.’’

And she predicts families will eventually initiate legal action.

“The law is being broken,’’ she said. “People are in such survival mode right now. It’s like getting hit on the turnpike by an 18-wheeler and in a year you will go after the trucking company.’’

James Vaznis can be reached at james.vaznis@globe.com.