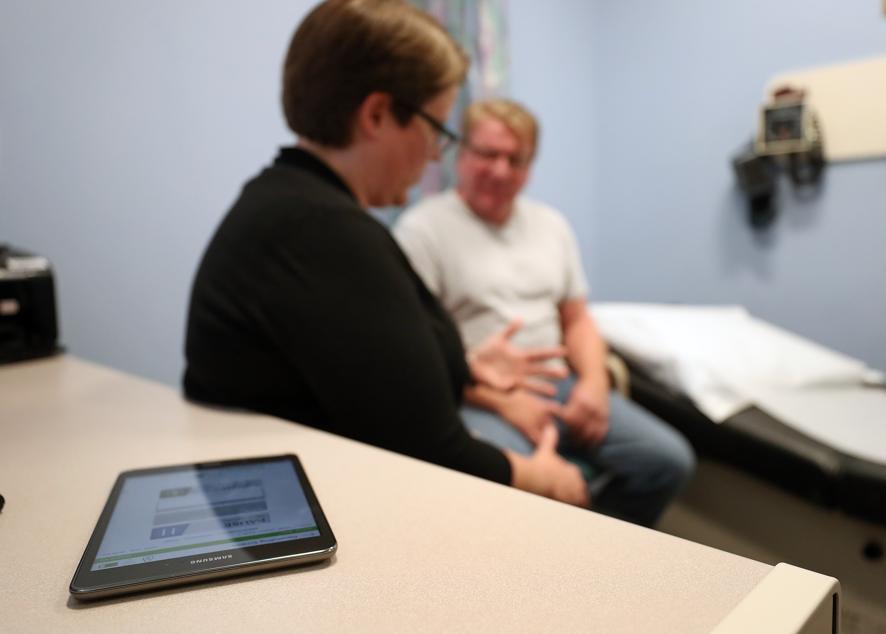 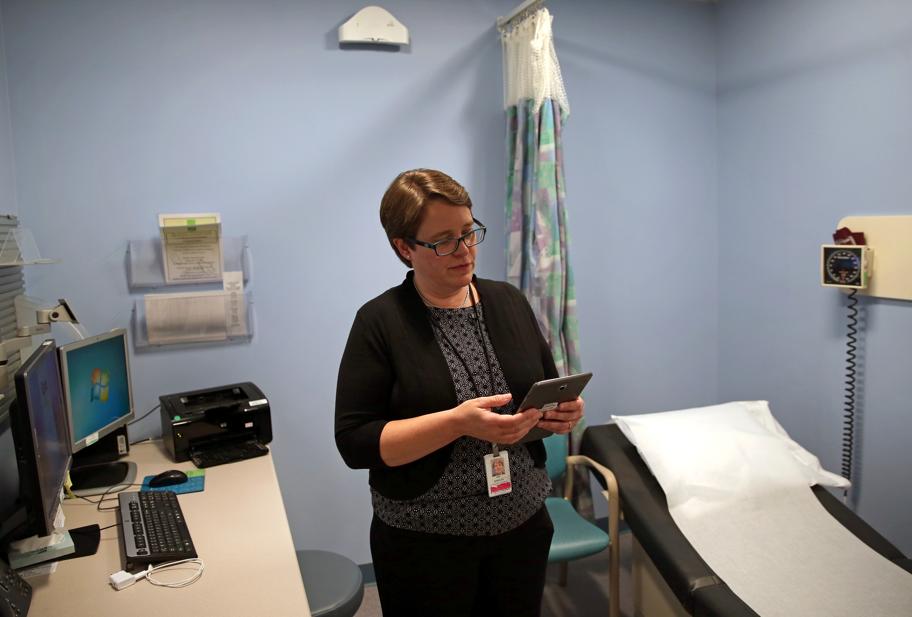 “We’re getting back to the patient care and the actual warm touch of interacting with people again,’’ said Dr. Amy Wheeler.

REVERE — Dr. Amy Wheeler set a small tablet computer on the table as she turned to face her patient. Then she did something that’s become increasingly rare for doctors in the digital age: She talked to him without typing or clicking anything.

Wheeler didn’t have to take notes, because the microphone on her tablet recorded everything. While she slept that night, a trained doctor working in an office building across the world in Mumbai listened to the recording and typed up a summary.

Patient documentation is a critical but tedious task for physicians, part of the mounting administrative burden that is driving many to exhaustion and burnout. Hospitals and physician groups are testing new strategies to alleviate that burden and free up harried doctors for other tasks — including seeing more patients.

Massachusetts General Hospital, where Wheeler practices, expanded the use of voice-recognition software, which allows doctors to speak instead of type their notes. It hired nearly 200 scribes to work in clinics, typing notes in the exam room as doctors see patients. And now: virtual scribes based in India.

Wheeler was an early adopter of the virtual scribe program. For her, the scribes have cut 10 hours of note-taking for a long day of patient visits into a 45-minute job.

“I don’t think I would still be working in primary care without this level of support,’’ said Wheeler, chief of adult medicine at Mass. General’s clinic in Revere. “We’re getting back to the patient care and the actual warm touch of interacting with people again, and that’s what I got into medicine for.’’

Nearly half of Mass. General doctors feel burned out, according to the hospital’s own surveys. Burnout worsened after the 2016 rollout of a complex new electronic health records system, which demanded more time of doctors, even for simple tasks.

“What we’re trying to get our doctors back to is face-to-face with their patient, where the technology fades into the background, but then comes forward to support us when we need it,’’ said Dr. David Y. Ting, chief medical information officer at the Mass. General Physicians Organization.

Doctors’ notes serve many purposes. They remind care providers about a patient’s diagnoses and treatments. They’re used to support insurance company billing. And now, as more patients access their medical records online, notes also can help them manage their health.

Ting and other fans of virtual scribes argue that these remote workers thousands of miles away actually take better notes than local doctors, because they can type while they listen and don’t have to rely on memory to recall details.

“Sometimes, before scribes, I would go into a visit with the patient, and the patient would start talking at 200 miles per hour, and I would start getting all stressed out — like, how am I going to remember all this stuff?’’ Ting said.

More than 130 Mass. General physicians in 12 specialties are using virtual scribes, and the hospital has plans to roll out the service to hundreds of additional doctors. At Brigham and Women’s Hospital — which along with Mass. General is part of the Partners HealthCare system — a handful of doctors started working with virtual scribes this summer. The Brigham plans to sign up at least 100 physicians within the next 12 months.

For years, Dr. Michael J. Healey has been jotting notes on scraps of paper as he meets with patients to help remember what they tell him. Healey recently started working with virtual scribes and finds he no longer needs to write down details.

“The scribe is going to capture all of that,’’ said Healey, associate medical director of the Brigham and Women’s Physicians Organization. “It’s very freeing.’’

Doctors at Mass. General and the Brigham are using a virtual scribe service called Scribble, from the Mumbai-based company IKS Health. About 1,000 US clinicians use Scribble, and the company is adding about 100 users a month. All of the Indian scribes have medical degrees and are trained to take notes like US doctors.

IKS Health says its service can save physicians 90 minutes to two hours per day. The time savings can vary widely by doctor, specialty, and setting.

And while they’re trying to relieve burnout, hospitals that hire virtual scribes are also seeking a return on their investment. When doctors spend less time at the computer, they can fit in more appointments — and generate more revenue.

The program is designed to comply with US data privacy laws. The audio recordings are stripped of personal details like names and dates of births, and they’re stored on US-based servers. Scribes working in India access the recordings through “dumb terminals’’ designed just for that purpose.

Patients must give consent before their appointments are recorded. And most patients don’t seem to mind: The consent rate is 99 percent, according to IKS Health.

“Any time you introduce a new entity into the equation, the risk multiplies,’’ he said. “There are privacy issues to be mindful of, but I think it’s fairly well managed.’’

Many companies market products aimed at reducing the administrative workload for doctors. More than 500,000 physicians and other providers around the world use Dragon Medical One, a speech-recognition program for documentation from Burlington-based Nuance Communications.

A growing number of physicians also have scribes with them in the clinic, drafting notes in real time. ScribeAmerica, a Fort Lauderdale, Fla., company that provides scribes to hospitals and physician groups across the country, including in Massachusetts, employs about 25,000 people — more than double its head count five years ago.

These jobs are often held by students and college graduates planning careers in medicine or nursing and tend to pay just above minimum wage. (IKS Health said its virtual scribe service has similar costs).

These solutions could be temporary. Many health care industry watchers expect that within several years, note-taking will become the responsibility of sophisticated artificial intelligence programs.

Doctors are likely to welcome any solution that saves them time at the keyboard.

Before she started working with scribes, Revere physician Wheeler used to turn on her laptop before dawn and return to it late at night. She brought it with her on family vacations.

Now, the mother of three said she’s able to work more efficiently and has found the time to launch a healthy lifestyle program at her clinic.

One of her regular patients, Jack Carey, said he’s unconcerned that scribes working overseas are listening to his appointments.

“This is a real good setup,’’ said Carey, a 58-year-old firefighter. “[The doctors] are not so stressed, they’re not rushing around like crazy.’’