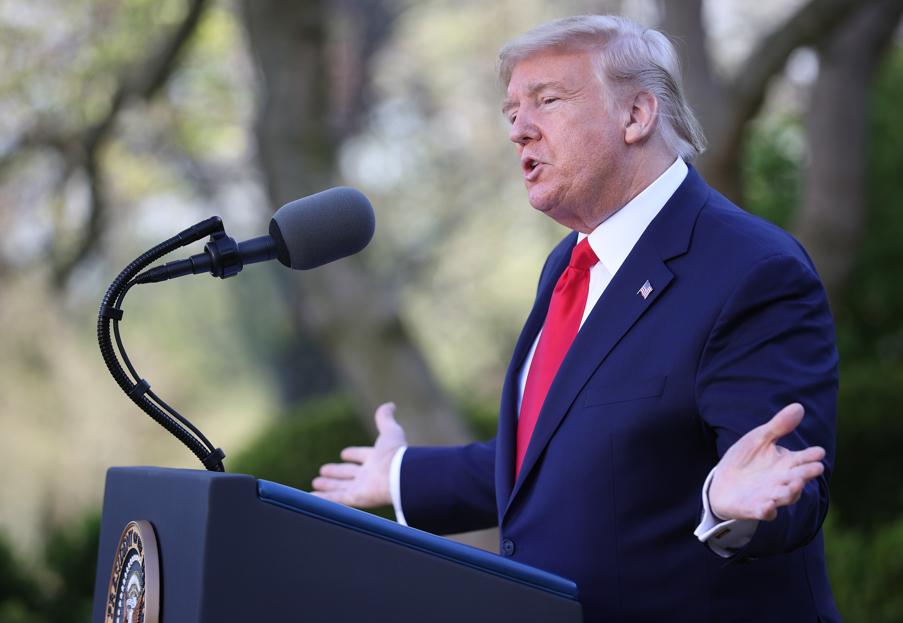 President Trump extended restrictions until May in his statement on Tuesday.

WASHINGTON — The numbers the health officials showed President Trump were overwhelming. With the peak of the coronavirus pandemic still weeks away, he was told, hundreds of thousands of Americans could face death if the country reopened too soon.

But there was another set of numbers that also helped persuade Trump to shift gears on Sunday and abandon his goal of restoring normal life by Easter. Political advisers described for him polling that showed that voters overwhelmingly preferred to keep containment measures in place over sending people back to work prematurely.

Those two realities — the dire threat to the country and the caution of the American public — proved decisive at a critical juncture in the response to the pandemic, his advisers said. The first of those two realities, the deadly arc of the virus, has been known for weeks even if disregarded by the president when he set his Easter target. But the second of the two upended Trump’s assumptions about the politics of the situation and restrained, for a moment at least, his eagerness to get back to business as usual.

The president’s reversal may prove to be an important pivot point in the effort to curb the pandemic, one that in the view of public health officials averted a greater catastrophe. Trump’s abrupt change of heart reflected a volatile president who has veered from one message to another, at points equating the virus to ordinary flu that will “miraculously’’ go away and at others declaring it an all-out war endangering the country.

In the past two days, Trump has dispensed with the assertion that the cure could be worse than the disease and circled back closer to the tenor of the warnings he has gotten from health advisers. Rather than lift the restrictions he had outlined by April 12, he extended them to April 30 and said on Monday that they “may be even toughened up a little bit,’’ although a national stay-at-home order like those in New York and California was “pretty unlikely at this point in time.’’

At Monday’s briefing, Trump recycled his line from a couple of weeks ago putting the virus ahead of the economy among his concerns. “The economy is No. 2 on my list,’’ he said. “First, we want to save a lot of lives.’’

Indeed, he again accentuated the starkest projections given to him by public health officials, noting that more than 2 million Americans could have died in the absence of any measure, perhaps to set expectations so that any eventual death toll below that can be cast as a victory.

But advisers said he was struck by the political surveying that indicated that the public wanted the restrictions to continue long enough to beat back the virus for fear that letting up too soon would simply reinvigorate the outbreak.

“There’s an acknowledgment that there’s no getting ‘back to normal’ if the virus is still a threat,’’ said Kristen Soltis Anderson, a Republican pollster. “And for the most part, we are seeing people supportive of leaders at the state and federal level, even if there is frustration about an initially slow response. However, if there’s a rush to reopen, the virus surges and people feel like the sacrifices they’ve made so far have been for naught, I can see that changing.’’

In a survey conducted by John and Jim McLaughlin, who were pollsters for Trump during the 2016 campaign, 52 percent of Americans preferred a full national shutdown requiring everyone other than those deemed essential to stay at home as opposed to 38percent who favored universal testing and isolating only those demonstrated to be infected with the virus.

In a piece on Newsmax, the conservative website run by a friend of the president’s, that appeared the day before Trump’s reversal, the McLaughlins wrote that the sentiment for a national shutdown prevailed in every region of the country and even among those who said they could not afford to be out of work for a month or less.

A survey released by the Pew Research Center on Monday showed that roughly 9 in 10 Americans believe that restrictions on international travel, cancellation of sporting and entertainment events, school closures, and limits on gatherings of 10 or more people were necessary responses to the pandemic. “One of the things that the discourse needs to help the country move forward is what are the dynamics that get you to that transition point to begin to reengage the economy at that scale,’’ said David Winston, another Republican pollster. “What you’re seeing at a policy level, at a political level and at an individual level is trying to understand what all those elements are.’’

Trump often whipsaws back and forth as aides compete for his ear and offer conflicting advice. The president’s Easter target for reopening came after some of his advisers expressed concern about the devastating effects on the economy wreaked by the widespread closures and urged him to consider making changes to the social-distancing measures.

The president’s complaint about the cure and his aspiration to pack the churches by Easter followed.

But then came troubling images from around the country, and especially New York City, where Elmhurst Hospital, located near his childhood home in Queens, was overwhelmed with patients and where temporary hospital tents were being erected in Central Park. The images were on television and in the New York Post, which he still reads every day. As in 2017, when Trump was moved to order a surgical airstrike on Syria after seeing horrifying footage of a lethal gas attack, the images helped get him to a new place, officials said.

Trump also said that he now knows people who have been hospitalized because of the coronavirus, without naming them, and seemed almost shocked that his own associates had been affected. “In one case, he’s unconscious in a coma and you say how did that happen?’’ Trump said on Monday.

The larger picture fell to the public health advisers, who provided Trump with a grim prognosis in a meeting on Sunday before his announcement extending social distancing guidelines. Dr. Anthony S. Fauci, director of the National Institute of Allergy and Infectious Diseases, and Dr. Deborah L. Brix, the White House response coordinator, showed the president models of how many people could be across the country could be affected if more stringent measures were not maintained.

“He looked at them, he understood them, and he shook his head and said, ‘I guess we got to do it,’ ’’ Fauci said on CNN on Monday. That meeting appeared to resonate with Trump, officials said.

Some Republicans saw a virtue in Trump’s reversal on reopening the country because of his credibility with his own base, which polls have shown to be somewhat less alarmed about the virus as Democrats.

“Because President Trump initially seemed anxious to open up the economy, his position delaying that should resonate with his base of voters,’’ said Neil Newhouse, a Republican pollster. “It will probably have the impact of making those who want it opened sooner a little more patient.’’