Working together, we can end the opioid epidemic in Massachusetts 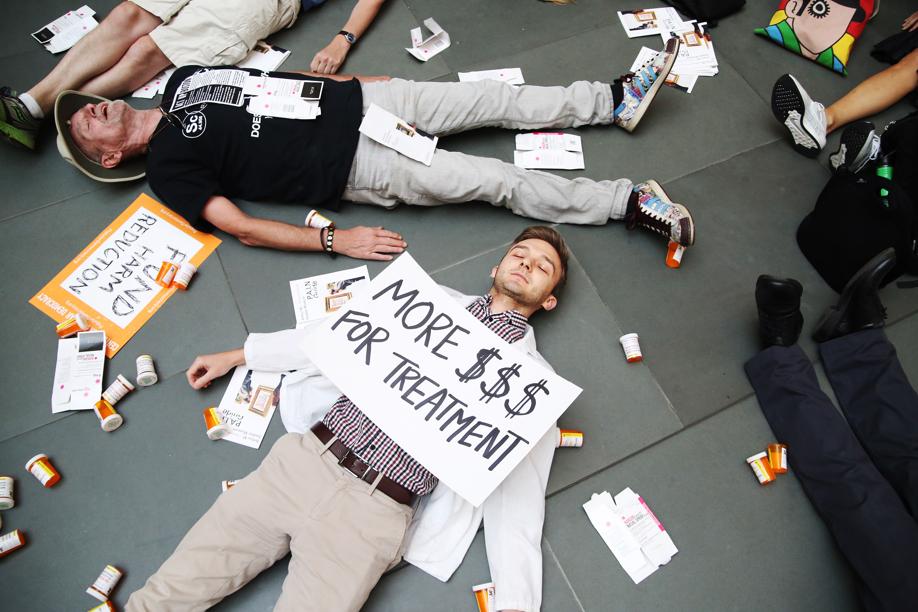 Demonstrators hold a “die in’ at the Harvard Art Museums in July.

NEXT IMAGE
By Andrew Dreyfus, David Torchiana, and Kate Walsh

When we want to make our Commonwealth stronger, the private, public, and nonprofit sectors come together and get it done. We did this with education reform, health care reform, marriage equality, and pay equity, just to name a few. Today, with Massachusetts in the grip of an opioid overdose epidemic as evidenced by two reports funded by the RIZE Massachusetts Foundation, we must once again unite and focus our combined strengths on this crisis that is weakening our Commonwealth and hurting people and families.

The human toll in Massachusetts is devastating, as we have one of the highest rates of opioid-related deaths in the country. Five people die every day in Massachusetts from overdose. Recently released research from Boston Medical Center shows that 4.6 percent of the Commonwealth’s population may be dealing with some level of opioid use disorder.

The opioid overdose epidemic is also taking a toll on our economy. The Massachusetts Taxpayers Foundation just released a report that details, for the first time, the negative economic impact of opioid use disorder on the state’s economy. The report tells us that businesses in Massachusetts saw lost productivity and additional health care costs approaching $5 billion in 2017. In the same year, costs to the state budget in the areas of health care services and public safety reached almost $2 billion. And municipalities, already struggling with their budgets, paid out more than a half-billion dollars in first responder and police costs related to opioid use disorder.

Massachusetts takes pride in our skilled and industrious workforce, but that too is affected by the opioid crisis. In another recent report, focusing on the impact of opioids on our workforce, the Massachusetts Health Policy Forum at Brandies University tells us that in addition to raising health care costs by hundreds of millions of dollars for businesses, the opioid crisis is significantly limiting our workforce and worker productivity. The report says that 55 percent of people with opioid use disorder are full-time employees and 37 percent of them are on commercial insurance.

The health care and human service communities are doing tremendous work in bringing compassionate care to people suffering from opioid use disorder and support for families. The Commonwealth, at both the executive and legislative levels, is taking significant steps to prevent deaths, reduce negative economic impacts, and improve and increase access to care and treatment. Every day we witness the remarkable recovery people are achieving with access to high quality care, and Massachusetts stands out nationally for our progress in fighting the epidemic.

But government and the nonprofit sectors can’t do it alone. As we learn more about the impact of the opioid epidemic on our economy, the business community must now bring its commitment, brainpower, and resources to the table and become an equal partner in addressing this crisis, just as it has done in the past on other issues.

To begin with, employers can be a major resource for helping their employees with opioid use disorder. The Massachusetts Health Policy Forum put forward recommendations for employers that include steps like removing co-pays and prior authorization on opioid use disorder-related medicines and counseling. Businesses can also take advantage of resources designed for them such as the Employer Resource Library created by Boston Medical Center’s Grayken Center for Addiction, and the opioid overdose tool kit issued by Blue Cross Blue Shield of Massachusetts. Most importantly, the business community can lead by example and eliminate stigma and create recovery-friendly workplaces to encourage more people to come forward, seek help, and reclaim their lives.

As a more fully engaged partner focused on the opioid crisis, the business community can use its buying power, its ability to convene community stakeholders, and its respected voice to influence public policies, improve health care coverage, and focus funding in ways that will greatly accelerate the reduction of deaths and negative economic impacts caused by opioid use disorder.

Ending the opioid overdose epidemic in Massachusetts may seem an overwhelming task, but we are confident that when the public, nonprofit, and private sectors fully come together, we will get it done and make the Commonwealth even stronger