Extra screen time? Kids will be OK, experts say
Usage is likely to increase. Still, experts say families should prioritize person-to-person interactions and activities during the pandemic as much as possible. 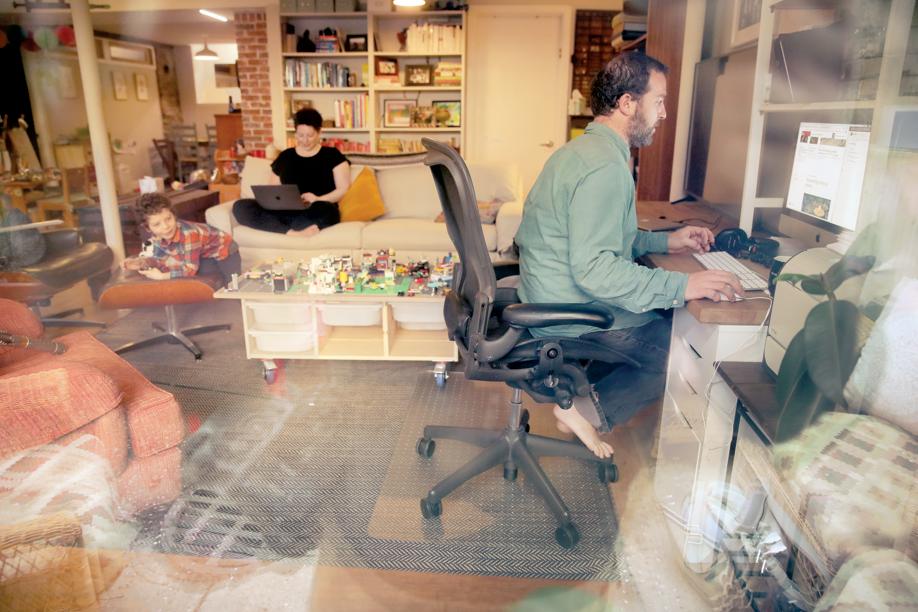 Seth and Nicole Kroll worked on their computers while son Louis, 5, entertained himself at their Jamaica Plain home.Louis Kroll, 5, of Jamaica Plain, has been granted extra screen time by his parents during the stay-at-home advisory.

Lisa van der Pool and her husband start off the week with the best intentions.

The Needham couple have kindergarten work sheets for their 5-year-old twins and set a goal of reading 10 books per day. They have an app from their school to keep the kids learning and engaged. They make plans to take the kids outside and to give them painting projects to stimulate their growing minds.

But then the dark realities of tight work deadlines and lengthy Zoom calls settle over the household. Out comes the iPad.

Like many parents navigating the changes brought on by the coronavirus pandemic, van der Pool has resorted to plopping her children down in front of a screen as a last-ditch effort to maintain some semblance of sanity while tending to the demands of life and work.

It’s a move that’s left people who are struggling to raise children and hold down jobs under the same roof with a bit of guilt. What happens when those formerly firm rules about screen time begin to bend in the face of unforeseen circumstances?

While limits are important, usage is likely to increase right now, according to the American Academy of Pediatrics. Yet some experts say that, under these unique circumstances, parents shouldn’t be too hard on themselves. There’s no official playbook for how to manage a household during a worldwide pandemic.

As long as parents are making themselves available to their children, and engaging them in activities and learning opportunities offline throughout the day, then “the kids will be all right,’’ said Dr. Michael Rich, director of the Center on Media and Child Health at Boston Children’s Hospital.

“Kids are remarkably resilient,’’ said Rich, an associate professor of pediatrics at Harvard Medical School. “They will survive our parenting.’’

Rich is also known as “The Mediatrician’’ because of his focus on media and technology consumption by children. He said that while the broad understanding of how screen usage influences a child’s health and development is unchanged, parents right now will need to adjust to today’s reality. A different environment requires different choices.

“Feeling guilty doesn’t help. What we should do is work from good evidence to make informed decisions for our kids,’’ said Rich. “This is about doing the best we can, it’s not about being perfect.’’

That’s the mantra that Abington resident Rick Collins has been trying to live by.

The father of two said his wife works at Trader Joe’s and has picked up more shifts as an essential worker. The decision has left him managing his 8-year-old son and 4-year-old daughter alone some days — all the while tackling his own work for Raytheon Technologies.

They go outside (if the weather permits), do school work online, and read and play games together, he said. But there are certain times when the family’s usual restrictions on screen time have to be abandoned.

“It’s not ideal. And we know it’s not ideal,’’ Collins said. “All we can do is hope that all the other years they’re going to have of education and development will outweigh whatever happens during this period of time.’’

Even the most staunch advocates of minimizing the amount of time kids spend with a glowing screen recognize that there will be challenges right now.

Josh Golin, executive director of the Campaign for a Commercial-Free Childhood, a nonprofit based in Boston, said that while parents should instill a healthy balance of physical exercise, creative play, and offline learning during this unprecedented period, they shouldn’t beat themselves up for falling short of their ideals.

“Certainly we don’t want to say absolutely no [screen time] limits at all,’’ he said. “But you know, my organization is pretty much as hard-core as they come when it comes to screen time. But we recognize these are not normal times, and so some things may have to give.’’

Golin added: “if screen time goes up on days when parents are working from home, it’s important to really limit screen time on nonwork days.’’

Dr. Claire M. McCarthy, a pediatrician at Boston Children’s Hospital and assistant professor of pediatrics at Harvard Medical School, said to the extent that parents are in survival mode, “there’s going to be some bending of rules.’’

However, she added, that doesn’t mean parents should use screens as a crutch.

“This could go on for a very long time,’’ she said. “So I think we should try to find that right balance between doing what we need to do to survive, and also trying to find different ways to keep our kids occupied that don’t involve screens.’’

McCarthy stressed that parents should monitor what types of media are being consumed and for how long; maintain important real-life interactions; find alternatives to screen time whenever possible; and maximize the time spent together when not on a device.

She said there are resources for parents about screen time for children on the American Academy of Pediatrics’s website — recommendations that shouldn’t be chucked out the window just because we’re dealing with stressful circumstances.

Still, “as long as you’re doing your best and you’ve thought this through the best you can,’’ she said, “I think we’re all just going to have to come to peace with it.’’

Seth Kroll of Jamaica Plain said, like other parents, he wrestled with the guilt of letting his son, Louis, have some extra screen time. But after trying to balance work with keeping a 5-year-old engaged all day, he and his wife “gave in and fully embraced the screen baby sitter.’’

To be sure, in the mornings they mimic their son’s school time by painting, putting on dramatic plays, going for walks with the dog, and using crafts.

But when push comes to shove, and things start to get hectic, out come the “Star Wars’’ films. And Kroll is OK with that.

“He knows all the characters and the plot lines frontwards and backwards,’’ Kroll said.

Kroll turns it into a learning experience: in between Zoom calls, they stage lightsaber battles and build spaceships out of LEGOs.