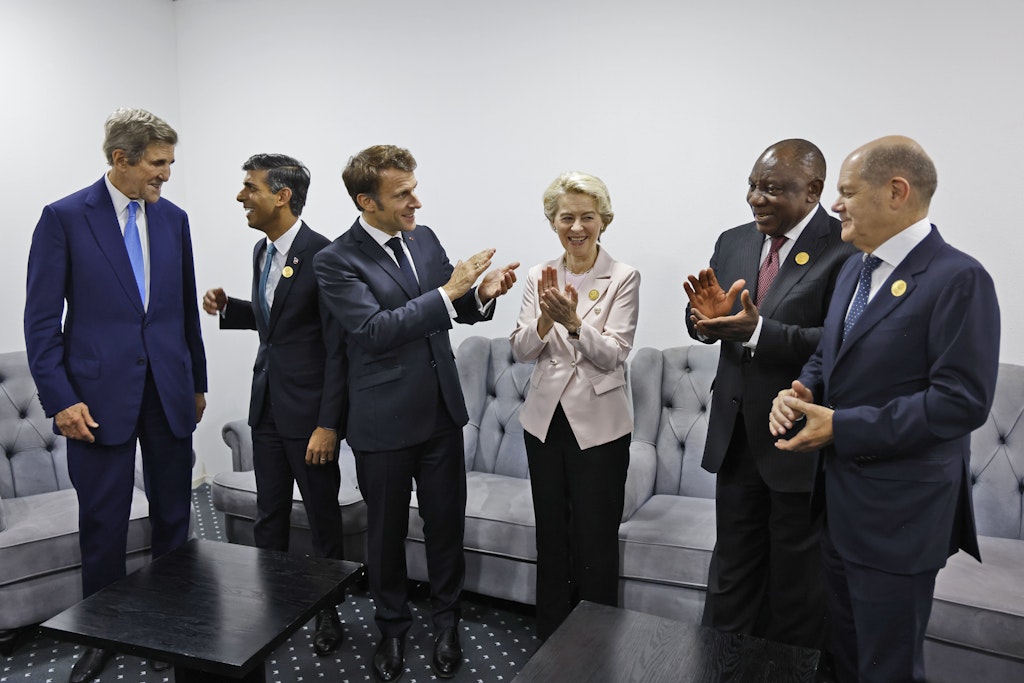 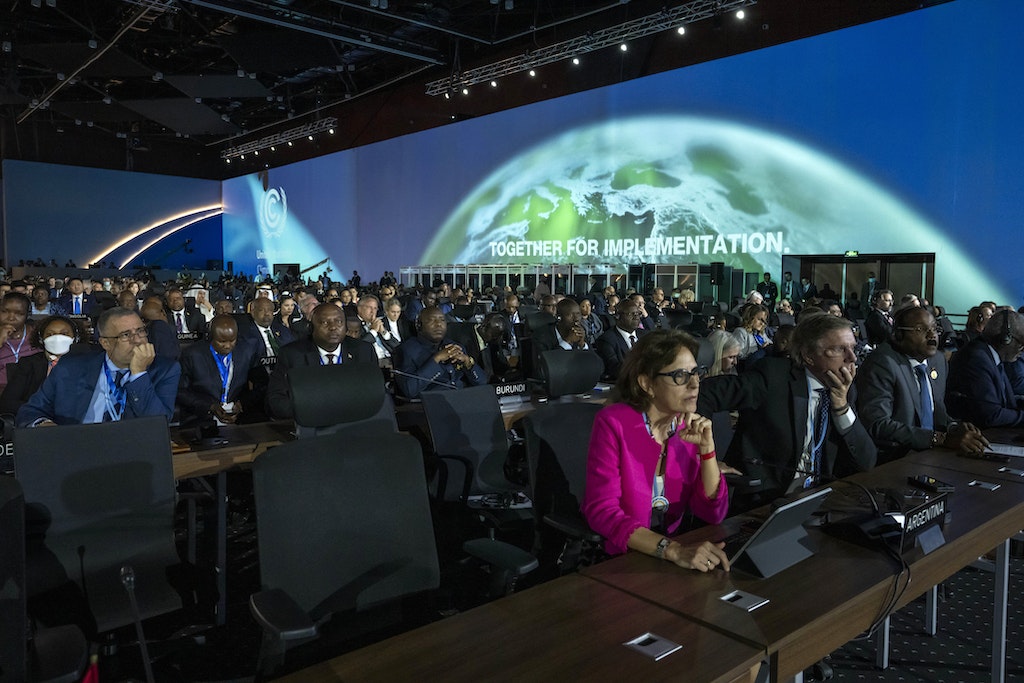 More than 100 world leaders will speak at the gathering in Egypt, most from developing countries demanding greater accountability from the richest, most polluting nations. (Nariman El-Mofty/The Associated Press)

SHARM EL-SHEIKH, Egypt — With the world on “a highway to climate hell with our foot on the accelerator,” the United Nations chief on Monday told dozens of leaders to “cooperate or perish,” singling out the two biggest polluting countries, China and the United States.

U.N. Secretary-General Antonio Guterres wasn’t alone in preaching with tones of fire and brimstone to try to shake up the world’s sense of urgency at this year’s annual U.N. climate conference.

Some of the strongest pleas for action came from leaders of poor nations that caused little of the pollution but often get a larger share of the weather-related damage. Several called on developed nations for reparations, which in climate negotiations is called “loss and damage.”

“Africa should not pay for crimes they have not committed,” Central African Republic President Faustin Archange Touadera said, adding that rich nations were to blame for the climate problem.

“Climate change is directly threatening our people’s lives, health and future,” Kenyan President William Ruto said of the African continent, which he said is looking at $50 billion a year in climate change damage by 2050. Ruto said Kenya is choosing to not use many of its “dirty energy” resources even though it could help the poor nation financially, and has instead opted for cleaner fuels.

Seychelles President Wavel John Charles Ramkalawan said, “Like other islands, our contribution in the destruction of the planet is minimal. Yet we suffer the most.” He called on wealthier countries to assist in repairing the damage.

Barbados Prime Minister Mia Mottley called for a massive overhaul of international development loans and a 10% tax on fossil fuel companies, which she said made “$200 billion in profits in the last three months.”

“I don’t need to repeat the horror and the devastation wrecked upon this Earth over the course of the last 12 months since we met in Glasgow,” Mottley said. “Whether the apocalyptic floods in Pakistan or the heat waves from Europe to China or indeed in the last few days in my own region, the devastation caused in Belize by Tropical Storm Lisa or the torrential floods a few days ago in St. Lucia.”

Ahead of this year’s conference, known as COP27, leaders and experts have been ringing alarm bells that time is running out to avert catastrophic rises in temperature. But the warnings may not have the impact of past meetings because of multiple other challenges pulling leaders’ attention — from midterm elections in the U.S. to the Russia-Ukraine war.

“In the fight for life on Earth, no one is a bystander,” said Jordan’s King Abdullah. “Every contribution counts. COP27 has brought us together to link forces and stand our ground. We are at the beginning of a long, challenging and urgent transformation.”

More than 100 world leaders will speak over the next days at the gathering in Egypt, most from developing countries demanding greater accountability from the richest, most polluting nations. Much of their focus will be on telling their stories of devastation by climate disasters, including a speech Tuesday by Prime Minister Shahbaz Sharif of Pakistan, where summer floods caused at least $40 billion in damage and displaced millions of people.

El-Sissi, who also called for an end to the Russia-Ukraine war, was gentle compared to a fiery U.N. chief Guterres, who said the world “is on a highway to climate hell with our foot on the accelerator.”

He called for a new pact between rich and poor countries to make deeper cuts in emissions with financial help and phasing out coal by rich nations by 2030 and elsewhere by 2040. He called on the United States and China — the two biggest economies — to work together on climate, something they used to do until the last few years.

“Humanity has a choice: cooperate or perish,” Guterres said. “It is either a Climate Solidarity Pact — or a Collective Suicide Pact.”

But bad timing and world events hang over the gathering.

Most of the leaders are meeting Monday and Tuesday, just as the United States has a potentially policy-shifting midterm election. Then the leaders of the world’s 20 wealthiest nations will have their powerful-only club confab in Bali in Indonesia days later.

Leaders of China and India — both among the biggest emitters — appear to be skipping the climate talks, although underlings are here negotiating. U.S. President Joe Biden is coming days later than most other leaders on his way to Bali.

United Kingdom Prime Minister Rishi Sunak was initially going to skip the negotiations, but public pressure and predecessor Boris Johnson’s plans to come changed his mind. King Charles III, a longtime environment advocate, won’t attend because of his new role. And Russia’s leader Vladimir Putin, whose invasion of Ukraine created energy chaos that reverberates in the world of climate negotiations, won’t be here.

Many European leaders who spoke Monday singled out Russia as the cause of the current energy and food crises, saying the war in Ukraine showed shifting to renewable energy was a matter of national security.

“We always want more” leaders, United Nations climate chief Simon Stiell told a Sunday news conference. “But I believe there is sufficient [leadership] right now for us to have a very productive outcome.”

In addition to the leaders’ speeches, the negotiations include “innovative’’ roundtable discussions that “we are confident, will generate some very powerful insights,” Stiell said.

Still, “the historical polluters who caused climate change are not showing up,’’ said Mohammed Adow of Power Shift Africa. “Africa is the least responsible, the most vulnerable to the issue of climate change and it is a continent that is stepping up and providing leadership.”

“The South is actually stepping up,” Adow told The Associated Press. “The North that historically caused the problem is failing.’’

For the first time, developing nations succeeded in getting onto the summit agenda the issue of “loss and damage” — demands that emitting countries pay for damage caused by climate-induced disasters.

Nigeria’s Environment Minister Mohammed Abdullahi called for wealthy nations to show “positive and affirmative” commitments to help countries hardest hit by climate change. “Our priority is to be aggressive when it comes to climate funding to mitigate the challenges of loss and damage,” he said.

Storylines that emerged during the summit’s first day included:

Loss and damage: In the world of climate negotiations, loss and damage refers to reparations. That would be rich nations, the most responsible for the emissions that have led to climate change, making reparations to developing countries that are often most impacted. While the idea has long been around, traditionally it's been more on the fringes of climate discussions than in the forefront. On Monday, it dominated many of the talks.

Progress and distractions: Throughout the speeches, leaders urged their counterparts and negotiators not to get distracted amid so many things competing for attention, such as the U.S. midterm elections and Russia’s invasion of Ukraine. On the sidelines, there was also talk about who wasn't there. China and India appear to be skipping the talks, though they are sending underlings to negotiations. U.S. President Joe Biden is arriving next week on his way to the G20 summit in Bali, days later than most of the other leaders.

Egyptian activist strike: Jailed opposition activist Alaa Abdel-Fattah escalated a hunger strike, according to his family. On Monday, Agnes Callamard, secretary general of Amnesty International, warned that failure by the Egyptian government to release him would lead to his death.