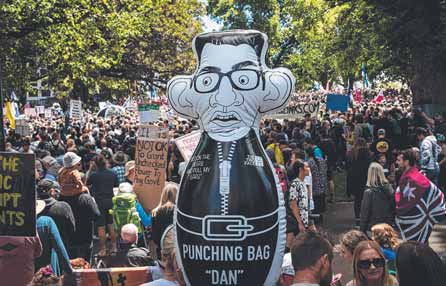 NEXT IMAGE
Endless Covid rules: welcome to the new politics of spite
We’re segregating a few vaccine-hesitants while restrictions are stored for the next dictator to use
STEVE WATERSON
A friend told me from Canberra last week that obedience to Covid regulations in the nation’s capital has all but disappeared, now the ACT has passed the 95 per cent double-vaccinated marker and speeds towards a projected 99 per cent by Christmas.

“Hardly anyone bothers to see if you’ve checked in or bothers to inspect your vaccine certificates,” she said. “It’s almost become an honour system.

“You’d love it,” she laughed, having detected over the past 20 months that I’ve not been the most ardent supporter of our pandemic countermeasures.

But I don’t love it. Like many others, I’ve been hoping for an end to the ill-conceived overreach and cowardly hysteria that has poisoned our lives; but this looks very like the false ending I feared, drawn out like a tone-deaf parody of the last bars of a Beethoven symphony.

I can’t remember when the restrictions were supposed to be lifted.

Was it at 70 per cent, or 80? Was it by the end of June, or two weeks after some curve was flattened? Maybe it was when we had enough new hospital beds, when the old and vulnerable were made safe, when the moon was in Sagittarius, or when Birnam Wood came to Dunsinane. The goalposts have been moved so often they should be on castors.

So instead of returning our lives to normal with a clear, decisive declaration as sensible nations around the world have done, our QR codes and contact tracing, our emergency powers, our lockdown provisions, our border closures and travel restrictions will gently fade into disuse, where they will fester just below the surface until the next vicious, simple-minded dictator slimes his or her way to power and, fancying a little social engineering, revives them.

They’ll be like the 13th century English laws that could fine you threepence for not practising archery on a Sunday, still on the statute books when I was at school – although not as quaint or useful.

When NSW hits 95 per cent, or on December 15, QR codes, happily, will only be required in “highrisk settings”.

It’s hard to see what risk, of any altitude, exists once almost everyone is fully vaccinated, but don’t question the imaginary science.

That tells us the following venues will remain high-risk: hospitals, aged-care and disability facilities. Oh yes, and gyms, places of worship and at funerals. And beauty parlours, for they are dangerously Coviddy places too.

Anywhere else feel a bit highrisk? Why, pubs and bars, naturally; and registered clubs and nightclubs: better keep the drinkers checking in, just in case caution is not present in sufficient abundance.

And severely Coviditious indoor music venues. But that’s it. Otherwise, free as a bird.

And no one will miss those awful masks, will they? Unless they’re on a bus, of course. Or a train. Or sunning themselves on a ferry. Or in an airport, or on a plane, or serving someone in a restaurant while unvaccinated, for the fiendish virus knows where best to lay its ambush. Everywhere else, mask-wearing will merely be “strongly encouraged”, with statesponsored paranoia outsourced to shopkeepers, restaurateurs and any other businesses, allowed to make up their own rules for admission and continue to demand vaccine certificates.

Please note this is in (relatively) relaxed NSW, whose stupidity shines like a beacon of tolerance and wisdom amid the moronic cruelty that has infected the rest of the country.

Elsewhere, our politicians demonstrate the adroitness of stage conjurers, misdirecting their audience, twisting words and turning meaning upside-down while patting themselves on the back. It’s “cases”, though, not any human agency, that lead to restrictions and lockdowns, as though the dolts who issue the orders have no choice, no role, no responsibility.

They then offer their patronising thanks for “all your hard work”, or for “doing the right thing”, which for many amounts to dodging their draconian fines, then trudging into the nearest pharmacy to be vaccinated against losing your job.

As we reclassify as pariahs the few who have refused the vaccine (but who, like almost everyone else in Australia, are also uninfected), the vitriol is warmed up.

Never mind that they are a risk primarily to themselves; our putative superiors demonise them as moronic conspirators lapping up deranged theories spawned in the darkest corners of the internet.

I think they’re foolish to refuse the vaccines, but the real derangement is displayed by the authorities, whose spiteful campaign long ago crossed the boundaries of human decency.

In Victoria, as vaccination levels increased, so did the impositions on those who remain unvaccinated, and on business owners, who have been ordered to check customers’ vaccine status.

The Premier, who has covered himself from head to toe in whatever is the opposite of glory, bragged triumphantly that he would bar the unvaccinated from all but essential shopping venues “for the entirety of 2022”.

“Whether it’s a bookshop, a shoe shop, a pub, cafe, a restaurant, the MCG, the list goes on and on,” Daniel Andrews said.

His counterpart in Queensland has decided the fun will end for the lepers on December 17, regardless of the state’s vaccination rate. QR check-in, judging by the state government’s Covid website, looks set to continue forever. In the other states – oh, who cares.

Even the has-beens with no political currency slither out to spew their bile upon the sinners.

Former NSW premier Bob Carr suggests the unvaccinated should be charged for their medical expenses should they catch Covid and require treatment: “You pay for your wilful stupidity,” the nasty pseudo-intellectual said, “not the rest of us.” Who’d be next? Cancer sufferers who used to smoke? Drinkers with swollen livers? Paralysed motorcyclists who took that last corner too fast? Human folly must indeed be hard to fathom when you believe yourself incapable of error.

On the national canvas, mysteriously, any criticism of the states’ conduct throughout the pandemic has been muted, at best.

How could anyone with any kind of voice stay silent as Australian police officers battered the citizens they are supposed to serve and protect? How could they watch the shutters come down on so many livelihoods without seeking a better solution? How could they see the light of ambition and enthusiasm fade in the eyes of our young people and think throwing more pretend money at them would preserve their self-respect? We’ve waited for a denunciation of this insanity from our federal leaders, hoping they might urge some decency on their worthless state counterparts.

But from the PM down, those elected to enunciate and promote the values of the nation, to inspire and guide us, to stiffen our resolve in difficult times, have virtually abandoned their posts, if not their prime positions at the bubbler of public funds.

We know you don’t hold hoses or anything else of value, but you could and should have been loudly and regularly damning the criminal fragmentation of our society.

Do our national representatives endorse the premiers’ and their health bureaucrats’ savage blundering, or do they fear the electoral consequences of speaking out against them? Either way, they are unfit to call themselves “leaders”, as devalued as that term already was. You’d search in vain for a sense of shame.

So while the elderly tremble in their care homes as the vultures circle over and around them, our politicians have overseen another assisted dying program for the businesses and dreams of thousands of Australians, fuelled by a winning combination of incompetence, greed and spite.

It’s a stain on our history that all their crocodile tears will never wash out.