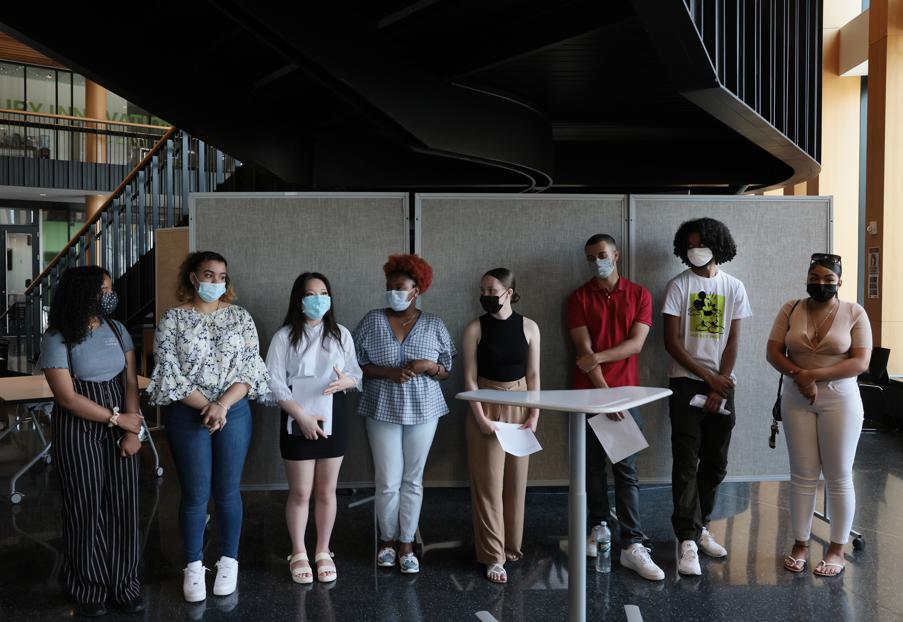 Members of the Boston Student Advisory Council spoke last month of their experiences with Re-evaluation Counseling.

The international organization that promotes Re-evaluation Counseling, an unorthodox brand of peer counseling, is dismissing criticism by Boston students who said they were pressured to participate in traumatizing sessions, calling it an “attack’’ on what they consider a powerful form of therapy.

In a five-page e-mail to RC members obtained by the Globe, Tim Jackins, the leader of RC, referred only obliquely but unmistakably to the controversy in Boston, where the school district is investigating the use of Re-evaluation Counseling in the school-sponsored student government group, the Boston Student Advisory Council.

In the letter, Jackins said attacks on RC are brought on by critics’ unresolved personal traumas, and advised members to stay level-headed and human “even when a large number of people are showing how bad their lives have been’’ by redirecting the “distress at us.’’

In fact, he suggested that the best way to resolve the situation is for all involved to participate in more RC sessions to neutralize that distress. He encouraged members to support those who have made mistakes, though he did not specify or acknowledge any particular missteps. And he referred RC members to a new website that offers positive perspectives on RC, urging members to tell friends and family what RC truly is about.

Jackins, who is based near Seattle and leads a movement that claims to have a presence in 93 countries, cast the situation as an opportunity to “push ourselves forward, learning and growing together, so we come out of this period in better shape [condition] than we were before.’’

The e-mail, along with the new website, provides the first public glimpse into the organization’s internal response to explosive allegations from BPS students who said they felt pressured to participate in therapy sessions by Jenny Sazama, an RC leader who used its methods with BSAC members for at least 15 years as the council’s codirector.

Keondre McClay, 22, who previously told the Globe he was emotionally abused by Sazama and other RC members as a student, said the e-mail disgusted him.

“They’re in denial. They’re gaslighting people,’’ McClay said. “RC is supposed to support people, yet you’re negating a whole community of people who shared their experiences with your practices at the foot of one of your major leaders.’’

RC encourages participants to relate difficult experiences to another person or group and “discharge’’ their emotions by crying, screaming, or laughing. Proponents see that emotional release as key to psychological health. Detractors say RC may expose practitioners to other people’s trauma and reopen psychological wounds without offering closure or coping tools by licensed professionals.

RC has sought to distance itself from the Boston controversy, saying that the students were not RC members and that the organization has no connection to the students.

Still, Jackins’s letter said RC was under attack by members of an organization for young people who said “they had been pressured into participating in activities that were based on RC ideas.’’

It offered no apology or sense of responsibility for the students’ experiences, even though some of the students’ most difficult encounters occurred outside of BPS, at RC workshops with adult RC members. A spokeswoman for RC, Nancy Sterling, said the organization “has no information on any mistakes which may or may not have been made; therefore there was no need for the organization to apologize.’’

The e-mail is filled with common RC terms, referring to “restimulation,’’ or experiencing past trauma, “recordings from childhood,’’ the vestiges of difficult, early-life experiences, and “discharge,’’ shedding earlier trauma through an emotional release.

Beryl Satter, a Rutgers University history professor who has researched RC, said Jackins’s e-mail is an example of RC’s belief that critics must be isolated and need more RC sessions to rid themselves of the emotions that prompted their criticism.

“He’s saying that the high schoolers are sick, in other words, and that they need RC to get better,’’ said Satter.

The strategy, which is also practiced by Scientologists, Satter said, shields RC and its leaders from openly debating criticism.

Without offering specifics or naming the student advisory council, Jackins’s e-mail offered advice on handling mistakes, saying they should be “recognized, corrected, and apologized for,’’ but Jackins did not acknowledge or specify any mistakes.

Jackins added that those who make mistakes deserve forgiveness: “[C]ondemning and throwing away individuals or groups — and their years of good, important work — because of a mistake, the possibility of a mistake, or a mistake they made long ago is destructive to all of our efforts to end oppression.’’

RC deployed the same strategy 40 years ago when it decertified teachers and closed chapters after members revealed that multiple women had accused the group’s founder, Harvey Jackins, of sexually exploiting them during counseling sessions, according to a 1993 report in Activist Men’s Journal. Harvey Jackins, who was Tim Jackins’s father and died in 1999, denied the allegations.

The new RC website addresses the organization’s more controversial positions, including its skepticism about mental illness and psychiatric drugs, its use of unlicensed counselors, and its encouragement of practitioners to share personal traumas in groups.

The website disputes accusations from some BSAC members and others that RC is a cult and also addresses questions about whether the organization is linked to Scientology and allegations that it counseled against homosexuality.

Harvey Jackins briefly associated with L. Ron Hubbard, Scientology’s founder, the site said, but RC and Scientology are not affiliated. RC also “takes a firm stance against the oppression of LGBTQ+ people,’’ the site said.

The new website includes testimonials about RC’s benefits from more than 80 people worldwide.

Steven Hassan, a licensed therapist and cult expert in Newton, said the new website may signal that RC is trying to reinvent itself or forge a new identity to distance itself from recent public controversies and keep members under its control. The practice is common, he said, among cults facing public scrutiny.

“The cult leader is trying to shore up the troops and re-indoctrinate them,’’ Hassan said of Jackins’s e-mail.

In May, the Globe reported that BPS’s contractor Youth on Board, which was led by Sazama, used RC with the student advisory council, encouraging members to share personal information — such as students’ mental health issues, family troubles, and abuse histories — in a group, and to discharge their emotions by crying, yelling, or screaming, with no professional follow-up. Twice-monthly “RC’’ sessions took place in the basement of Sazama’s home in Jamaica Plain, but some of the teens also participated in regional RC gatherings with adult strangers.

Students also described Sazama discouraging them from seeking licensed mental health treatment, and using details about their personal lives as leverage to pressure them to do things she wanted. Some students of color said they faced pressure at RC events to share their experiences with racism with white adult strangers.

Former students have also raised concerns about the involvement of Kelly Bates, a lawyer and civic leader from Hyde Park who is running for City Council as an at-large member, in the use of RC with BSAC students, the Globe reported last month. A campaign spokesperson said then that Bates no longer teaches RC and had no role in implementing RC in the council. Last week, her campaign said Bates wouldn’t comment on Jackins’s e-mail.

Sazama, who has left Youth on Board, has been practicing Re-evaluation Counseling since her youth and has no license to provide mental health care.

BPS stopped the unlicensed therapy in March after students abruptly resigned from BSAC and, in a news conference, called the counseling sessions emotional abuse and accused Sazama of recruiting students into her RC “cult.’’

An outside investigation ordered by the district said students described RC sessions as “weird, uncomfortable, and cult-like,’’ prompting Superintendent Brenda Cassellius to cut ties with Youth on Board. Days later, the Globe published its report and Cassellius ordered a second, broader investigation.

Last Friday, a spokesman said BPS is retaining an investigator and most interviews will likely take place in September.

Suffolk District Attorney Rachael Rollins has also met with current and former BPS students who were subjected to the counseling sessions.

“The DA takes their concerns and complaints very seriously and her team is looking into the allegations,’’ Rollins’s office said.