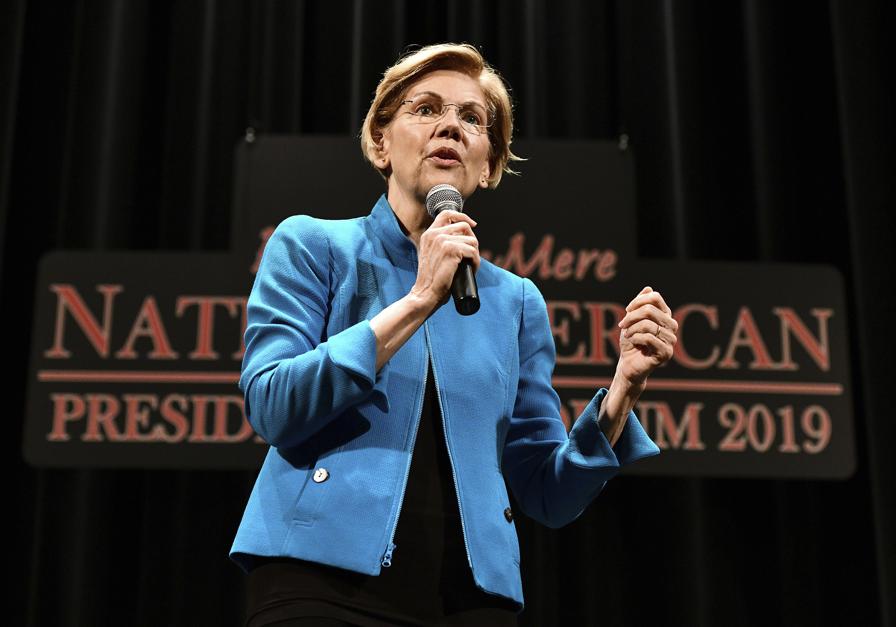 Senator Elizabeth Warren on Monday offered a broad apology at a forum organized by Native Americans, publicly acknowledging missteps relating to her claims of tribal ancestry that have fueled discomfort among some Native and progressive activists and made her a target of ridicule by President Trump and other Republicans.

“I want to say this, like anyone who’s been honest with themselves,’’ Warren said at the event in Sioux City, Iowa. “I know that I have made mistakes. I am sorry for harm I have caused. I have listened and I have learned, a lot.’’

Her apology was sweeping but not specific. Warren did not directly mention the DNA test she took last year in an effort to prove her claims — a step that raised deep objections from Native Americans who opposed her use of controversial racial science to make a point about her ancestry. On Monday, the video promoting those results, first released last fall, was no longer on her campaign website.

Eight months into her presidential campaign, Warren is engaging anew on an issue that she had tried to put to rest last year by releasing the DNA test. After apologizing in private, and doing other outreach to Native Americans, she used the forum Monday to highlight her connections with indigenous leaders. She sought to move beyond the controversy and into the realm of policy — a place where she is much more comfortable.

“The federal government’s history with our tribal nations has been one of broken promises. We need to make change. We need to honor our trust and treaty obligations to the native tribes,’’ Warren said, connecting the problems facing Native Americans to her broader calls for “big structural change.’’

Her presentation — and the apology — was met with warm applause.

Frank White, chairman of the Winnebago Tribe of Nebraska, attended the forum and suggested that, in his view, she had already addressed her heritage.

“She covered the issue in the past and then she left it how it is,’’ he said in a phone interview. “I don’t think it’s a major concern to the Native Americans in our area.’’

The controversy over Warren’s heritage has simmered since her first Senate race in 2012, when she was revealed to have identified herself as Native American in some academic directories during part of her career as a law professor. Warren has described distant Native American ancestry as an indelible part of her family history; her political opponents have suggested she used those claims to get ahead, although a Boston Globe review of her career as a professor found that wasn’t the case.

In recent years, Trump has seized on the issue, using an ethnic slur, “Pocahontas,’’ to suggest she is lying. Last fall, Warren released a carefully produced video that included the results of a DNA test meant to prove him wrong by showing she had a very distant indigenous ancestor.

Some Native Americans have long been wary of white people attempting to claim Indian ancestry in hopes of a benefit, and they publicly objected to her use of the test.

Earlier this year, Warren apologized privately to Cherokee nation officials for causing any “confusion’’ about a tribe’s right to determine who its members are — a move that drew new attention to the controversy days before the official launch of her presidential campaign.

When reporters surrounded her in the US Capitol complex seeking clarification on that apology, she said she “should have been more mindful of the distinction with tribal citizenship and tribal sovereignty.’’

Since then, Warren has tried to move quickly past the issue in the rare instances she is asked about it on the campaign trail, saying her impressions about her heritage came from her family’s lore. “That’s just kind of who I am,’’ Warren said at a CNN town hall in March, “and I do the best I can with it.’’

At Monday’s forum, she showed a fresh willingness to acknowledge she had done “harm,’’ although she did not go into detail about what it was.

Warren’s new approach to the issues around her heritage was also evident on her campaign website. A page that had featured the DNA video and a link to the DNA report, information about how her heritage claims did not advance her career, and background on her upbringing was empty on Monday. The campaign created a new web page that featured documentation and the Globe’s reporting on Warren’s career but not the video or a link to the DNA report.

CNN reported Sunday that the campaign was planning to remove the video as part of a revamp of its website.

Warren’s appearance at the forum on Monday followed her Friday rollout of a sprawling plan to improve the lives of Native Americans by stabilizing funding for programs that meet their needs, representing their interests at the highest levels of government, and expanding their criminal justice jurisdiction in their land. Under the plan, Warren would revoke permits for the Keystone XL and Dakota Access pipelines, which many tribes regard as a threat to their ancestral lands.

She also called for “an unprecedented initiative’’ to address the crisis of missing and murdered indigenous women, an issue of deep concern to the event’s attendees.

She found a largely friendly audience at the Sioux City forum. Onstage, the activists she spoke with praised her plan, calling her a “staunch champion’’ for Native American issues.

Warren was introduced by US Representative Deb Haaland, a Democrat from New Mexico who is one of the first Native American women in Congress and who endorsed Warren earlier this summer. She acknowledged Warren could still face challenges related to her heritage claims.

“Some media folks have asked me whether the president’s criticisms of her regarding her ancestral background will hamper her ability to convey a clear campaign message,’’ Haaland said. “I say that every time they asked about Elizabeth’s family instead of the issues of vital importance to Indian country, they feed the president’s racism.’’

“Elizabeth knows she will be attacked,’’ Haaland said, “but she’s here to be an unwavering partner in our struggle.’’

White, of the Winnebago Tribe of Nebraska, said he has read half of Warren’s 20-page plan so far and likes it for the most part.

“It sounds encouraging, but there is still going to have to be some work done on it,’’ he said.

The forum was named for Frank LaMere, a Winnebago activist who died in June. Warren had met privately with LaMere during the first weekend of her campaign.

“I acknowledged that she has taken a lot of heat from the president,’’ LaMere said in an interview with the Globe after that meeting. He added, “I simply mentioned to her that I appreciate her resolve and her commitment.’’

Laura Krantz of the Globe staff contributed to this report. Jess Bidgood can be reached at Jess.Bidgood@globe.com. Follow her on Twitter@jessbidgood