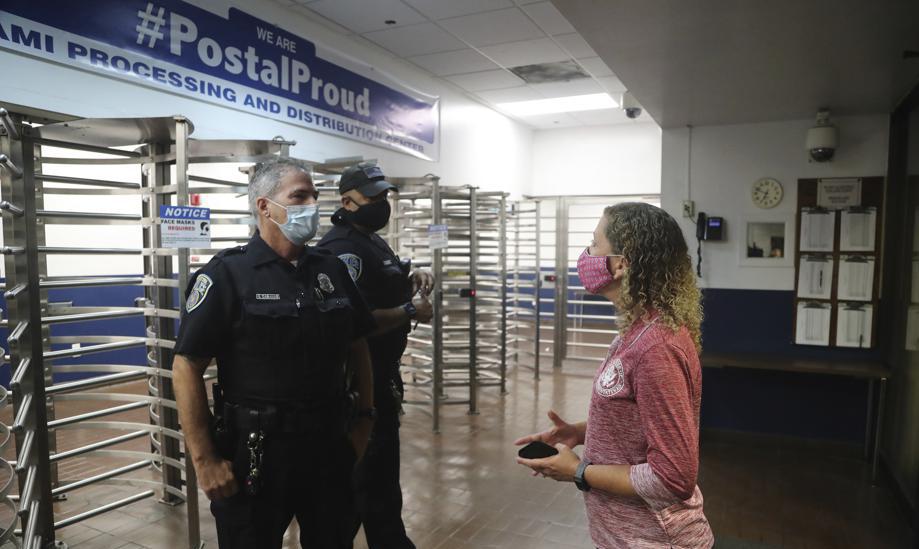 US Postal Service police officers barred a Florida congresswoman from scheduled tours at two mail processing complexes Friday, blocking entry to the facilities and threatening to escort her from the property if she refused to leave.

Representative Debbie Wasserman Schultz had arrived at the Royal Palm Processing and Distribution Center in Opa-Locka, Fla., for a 4 a.m. tour to find the parking lot entry roped off with caution tape and a US Postal Inspection Service cruiser blocking the gate. Local Postal Service officials informed her and union leaders waiting to accompany her into the building that national USPS leadership had directed them to bar the group from the building.

At 6:30 a.m., Wasserman Schultz was denied entry at the Miami Processing and Distribution Center 10 miles away by a local Postal Service official as two armed Postal Inspection Service officers stood in front of turnstiles in the lobby.

‘‘I’m outraged. I’m angry,’’ Wasserman Schultz said in a phone interview. ‘‘I am frustrated for the seniors that aren’t getting their medicine, worried for the voters whose rights are going to be impinged, and very concerned, because I’ve been contacted by so many businesses who have had their mail slow and whose businesses are already struggling in this economic downturn. And so for the Postal Service to intentionally be trying to hide behind their locked gates and their excuses, it all lies at the feet of [new Postmaster General] Louis DeJoy because this has all occurred since his appointment.’’

Wasserman Schultz’s staff notified Postal Service officials early Thursday afternoon of her intent to observe a typical morning mail-processing shift, she said, and followed the same notification procedure as when she visited the Royal Palm facility earlier in the year.

‘‘It wasn’t a request,’’ Wasserman Schultz said. ‘‘It was a notification.’’

But the Postal Service did not acknowledge that communication until hours later, Wasserman Schultz said, when a member of her staff reached a USPS official by phone. That official said Wasserman Schultz did not provide sufficient advance notice of her intent to visit and that she would be denied entry.

‘‘I’ve been there before,’’ Wasserman Schultz said. ‘‘I wasn’t told that I had to give any lengthy notice or that there was any rules. So what I did was I decided that I was going to go anyway.’’

In an e-mailed statement, Postal Service spokeswoman Kimberly Frum said the agency was notified late Thursday afternoon of Wasserman Schultz’s request for a tour at 4 a.m.

‘‘We spoke with her staff to explain that we were unable to set up the tour on such short notice, but would be happy to accommodate her at another time,’’ Frum wrote. ‘‘We look forward to working with the congresswoman and her staff to arrange a visit in the near future.’’

A Postal Inspection Service spokesman wrote in a statement that the officers responding to Wasserman Schultz’s visit were based at the Miami processing facility and provide security at both locations.

‘‘The disrespect of a Congress member who sits on the Oversight and Reform Committee that is protecting the post office and they’re denying her coming in,’’ said Nick Mosezar, the president of the National Postal Mail Handlers Union Local 318 who helped plan Wasserman Schultz’s visit. ‘‘Unbelievable.’’

Postal workers from coast to coast and national union leaders also say workers were told overtime hours would be eliminated and that the directive was issued by the postmaster general. Memos circulated to mid-level managers and obtained by The Washington Post stated that DeJoy planned to eliminate overtime hours. DeJoy denied in sworn testimony ever issuing such an order.

‘‘Carriers were ordered off the streets at 5 o’clock whether you finished your route or you didn’t finish your route,’’ said Al Friedman, president of the Florida State Association of Letter Carriers. ‘‘That was everywhere.’’

Problems at the Royal Palm facility had been mounting in recent weeks, Mosezar said. On Thursday afternoon shortly before Wasserman Schultz informed the Postal Service of her planned visit, mail sat in pallets on the shop floor that was supposed to be delivered on July 22 — 43 days late — according to photos of the mail taken by postal workers and provided to Mosezar.

The week after DeJoy took office, the Postal Service removed a Flat Sequencing System, a gargantuan machine that sorts ‘‘flats,’’ or larger paper mail items such as magazines and ballots, by Zip codes and into delivery sequence for letter carriers.

It is one of the 671 high-speed sorting machines the Postal Service planned to remove over the summer, according to documents obtained by the Post. DeJoy on Aug. 18, said he would suspend the removal of any further machines, but by Aug. 1, 658 of them were already scheduled to be scrapped.

‘‘When you start turning off and letting those machines no longer run, they’re just there,’’ Mosezar said. ‘‘They’re roped off, and now the area that would be normally used for the processing on that machine is now used as a storage area for delayed mail or a storage area for empty equipment.’’