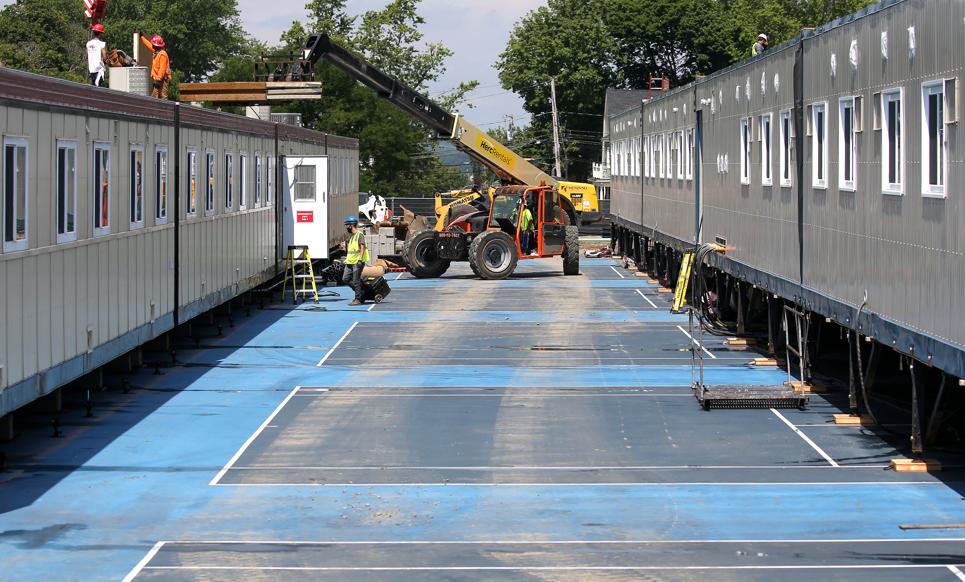 At Tufts, temporary dorms were built on the tennis courts to accommodate students who would need to be quarantined. Students and family members arrived at BU on move-in day in 2018.

NEXT IMAGE
By Deirdre Fernandes and Laura Krantz and Charlie Wolfson, Globe Staff and Globe Correspondent

It’s an annual Boston ritual in August: College students and families hauling furniture and luggage clog the sidewalks in front of dormitories and apartment buildings. Their moving vans line the streets. They pack local restaurants.

But this year, moving-in day and the arrival of what in normal years is close to 170,000 college students to Massachusetts from across the country and perhaps even the world will serve as more than a minor inconvenience. In the era of the coronavirus pandemic, it could also signal an enduring public health threat.

Many Boston-area colleges and universities plan to bring a substantial number of students back to campus in the coming weeks for the fall semester. Many will travel from states that are virus hot spots, where rates of infections are on the rise. They will test the state’s hard-won, but fragile success, in lowering the coronavirus infection rate and death toll.

About 28 percent of the roughly 50,000 out-of-state students in Boston, Cambridge, and Somerville come from states with big outbreaks of the coronavirus, including California, Florida, Georgia, and Texas. These figures are based on data colleges submit to the federal government about the state origins of first-year students.

Boston-area universities also enroll more than 56,000 international undergraduate and graduate students. But it’s unclear how many of them are currently overseas and won’t be able to return due to travel restrictions and stricter visa rules.

Colleges and universities say that they are spending millions of dollars on testing and monitoring to ensure their students and those who live around them are safe. More students are also likely to stay home and take their classes online, reducing their numbers in the city, college administrators point out. Still, many epidemiologists and Boston-area residents fear there will be an influx of college students — eating at local restaurants, shopping at grocery stores, drinking at off-campus parties, and taking public transportation — that could lead to new outbreaks of corona­virus.

And even as colleges set strict rules for social distancing in classrooms and dormitories, their ability to police students on their free time is limited.

“I’m pretty frightened about the fall,’’ said Gregg Gonsalves, an assistant professor of epidemiology at Yale University. While Massachusetts and New England have experienced fewer cases of coronavirus this summer, new infections are spreading faster than ever in the rest of the country.

“There’s going to be an invasion of people to Boston,’’ he said. “It’s a risky proposition.’’

Until last week, Massachusetts officials had provided little oversight of colleges’ reopening plans, leading schools to craft strategies that vary in strictness. Some schools, such as Harvard, will allow few students back on campus, and all classes will be taught online. Boston University and Northeastern University, meanwhile, plan to offer all students the opportunity to return in person.

On Friday, Governor Charlie Baker announced that returning college students will have to quarantine for 14 days or provide the results of a negative COVID-19 test administered no more than 72 hours before they arrive here. Exempt are students from states deemed a lower risk than Massachusetts.

Boston city officials are worried about the student influx but have little authority over the schools. They also recognize that students are good for the local economy. Higher education employs 136,000 people across the state.

“I am concerned about college kids coming back to Boston,’’ Mayor Martin J. Walsh said this week during a news conference. He plans to speak this week with college officials.

Walsh pointed out that Boston’s large outbreak in March started after about 100 people were infected at a local business conference. He is concerned that schools began crafting reopening plans months ago, before COVID-19 cases started to spike in other parts of the US.

“Many of these students are going to be coming from high-risk states at this point. So we’re going to be monitoring this situation very closely,’’ Walsh said.

Walsh praised the governor’s quarantine rule but said ideally students should quarantine for 14 days at home and then quarantine again for two weeks in Boston and test negative.

Walsh said he is concerned about whether students will follow safe practices. He does not want to have to use city police to monitor them — but said he would if necessary. “People need to be careful. I would not advise college students to be having parties,’’ he said.

City councilors are also worried about schools’ ability to oversee the students who pack into off-campus apartments in their districts each September. In Mission Hill, Allston, Roxbury, and the Fenway, students live side by side with longtime residents, many of whom are low-income or people of color and therefore at greater risk of contracting the virus.

“We can’t let institutional financial priorities endanger the health and safety of our neighborhoods,’’ said City Councilor Kenzie Bok, whose district includes Mission Hill, Longwood, Fenway, and Kenmore. “I’m going to keep hammering that point home to them because for me, I feel like I’m speaking up for constituents who are deathly afraid.’’

Though colleges have set up detailed safety requirements for students living on campus, Boston University has said it will launch a communication campaign to inform students of proper protocols but will not patrol off-campus students. Several other universities also have less detailed plans about whether they will provide quarantine facilities for off-campus students.

Bok said colleges should teach online as much as possible and praised Berklee College of Music, which reversed course last week and announced that all courses will be virtual this fall.

“They are not quality of life issues this year, they are life and death issues,’’ she said. ’’Wherever we can do things virtually, we should be right now.’’

College officials say they understand their responsibility to city residents.

“Every single one of the presidents is taking this work incredibly seriously,’’ said Laurie Leshin, president of Worcester Polytechnic Institute. “They see these decisions as being the most important of their professional careers and they realize that they are not islands, that we all live within communities.’’

Leshin chaired a committee assembled by the governor to make recommendations for reopening colleges. She called the resulting document a high-level framework and said the state has trusted schools to formulate their own plans.

At the same time, she said, she and other administrators worry that students might not follow the intricate safety plans schools spent all summer crafting. “I think everyone is worried and that’s appropriate. It’s a new world,’’ Leshin said. “But I’m also really confident that our students want to be back and that they’re willing to do some different things in order to be back on campus.’’

Colleges have sought input from public health experts. A. David Paltiel, a health policy and management professor at Yale University School of Public Health, and Rochelle P. Walensky, the chief of infectious disease at Massachusetts General Hospital, have been advising universities here and across the country about what it takes to reopen their campuses safely.

They found that frequent testing was key and universities likely need to screen students every three days, along with requiring a strict adherence to masking, social distancing, and other preventative measures. Testing once a week could be sufficient to contain an outbreak, Paltiel said, but it leaves very little room for mistakes and unexpected problems.

“You‘re assuming everything that could go wrong goes right,’’ he said.

If colleges and universities cannot meet testing standards, they should rethink their plans to bring students to campus, Paltiel said.

Across Massachusetts, college testing plans vary widely. Some schools, including Boston College and the University of Massachusetts Amherst, plan to test on-campus students weekly; others every five days.

Tufts University plans to test on- and off-campus students twice weekly and has built modular dormitories on its tennis court to house quarantined students.

Harvard is one of the few schools that has announced it plans to test students every three days.

Northeastern University officials said their plans — currently to test every five days — can be adjusted if necessary.

“We are building out a regimen which is so far beyond what has ever been done in the history of pandemics,’’ said David Luzzi, the senior vice provost for research at Northeastern.

About 30 percent of Northeastern’s 14,000 undergraduate students live off-campus, many in the Fenway and Roxbury. The university has also leased hotel rooms and apartments off-campus for students in an effort reduce crowding in dormitories.

The school is trying to develop safe activities for students outside and on campus to deter them from throwing large parties and other risky activities, officials have said.

While Massachusetts bars and nightclubs will be among the last businesses to reopen under Baker’s plan, many worry that students will still be tempted to throw parties and ignore masking and social distance guidelines.

Earlier this month Tulane University administrators threatened students with suspension and expulsion after reports surfaced that some living in New Orleans hosted large parties over July Fourth weekend. The University of Washington said at least 145 students living in Greek housing contracted the virus over the summer, while at the University of California Berkeley, 45 students in fraternities and sororities tested positive for coronavirus in one week, prompting the school to switch all fall classes to online to start.

Still, neighbors have little confidence students will act like anything other than, well, students.

“Are they going to stay socially distant in an off-campus uncontrolled apartment where there’s already four of them or six of them living? I don’t know,’’ said Richard Giordano, director of policy and community planning at the Fenway Community Development Corporation. “Are the students not going to have parties?’’

Anthony D’Isadoro, president of the Allston Civic Association, said it will be important for universities to actively monitor off-campus student behavior.

Though “it’s not a campus building, they need to take responsibility to ensure that the students act in a responsible manner, not just because it’s a pandemic but to be part of the community and acting in a grown-up, responsible way,’’ D’Isidoro said.

Residents also worry because each school’s plan is different. For example, Simmons University, which will be all online but allow a few students in residence halls, is adjacent to Northeastern University, which plans to have many more students on campus and hold some classes in person.

Jason Desrosiers, manager of community building and engagement at the Allston Brighton Community Development Corporation, said the lack of a uniform approach is cause for concern.

“It should not be everyone for themselves,’’ Desrosiers said. “I don’t think the current plan is coordinated and data-driven. I think it’s just letting the universities put the cart before the horse.’’