Arm yourself against conspiracy theories
There are basic ways to distinguish the plausible from the far-fetched. 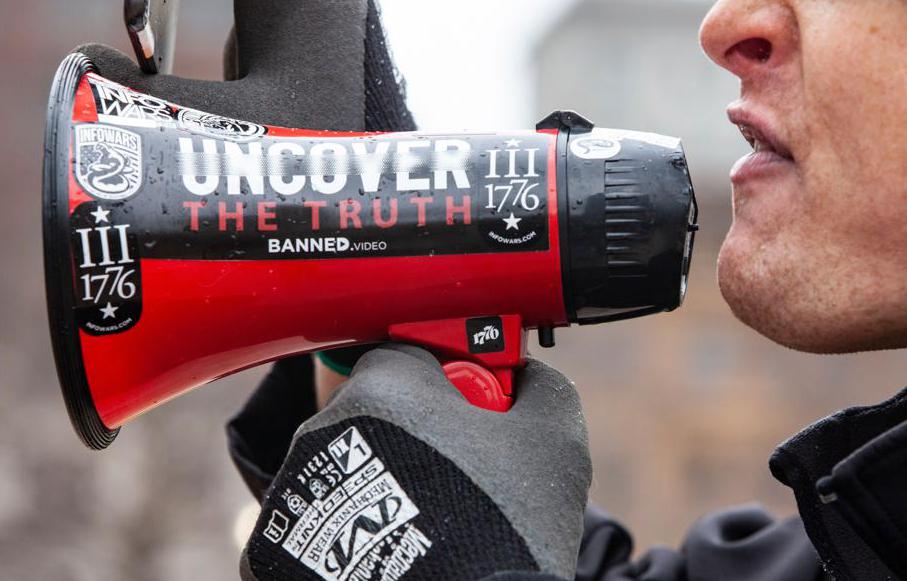 A protester touting conspiracy theories yells over a bullhorn in Columbus, Ohio, Jan. 17.

Conspiracy theories might once have seemed like odd but innocuous beliefs entertained by harmless eccentrics. No longer. We have now seen how they can spark deadly violence. The Jan. 6 storming of the Capitol came because a mob of angry Trump supporters labored under the groundless conspiratorialist delusion that the presidential election had been stolen from their favored candidate.

It may not be the last such violence we suffer. On Wednesday, the Department of Homeland Security warned that more may come from extremists with “perceived grievances fueled by false narratives.’’

Far too many Americans are under the sway of factually untethered notions. It’s not just the utterly fallacious stolen-election falsehood. According to a recent NPR/Ipsos poll, 17 percent of respondents believe the bizarre QAnon conspiracy theory that a global cabal of satan-worshipping cannibalistic sex-traffickers are trying to control our politics and media, while another 37 percent said they didn’t know whether or not that’s true.

Once people have been swept into the conspiratorialist whirlpool, it is difficult to get them back on firm factual ground. Sometimes it’s because a conspiracy theory provides a simple explanation of complex events; other times, because it allows them to assign hero or villain status in an ideologically congenial way. Beyond that, few are ever eager to admit they were mistaken or taken in or duped by a demagogue.

One thing we can do, however, is reinforce our collective ability to detect and reject conspiracy theories. So, given that there sometimes are real conspiracies, how do you distinguish a conspiracy theory from a plausible assertion?

“The first red flag is that you are explaining something that is a big, complex event with a lot of structural and institutional causes by blaming it on a few individuals,’’ Tulane University political science professor Geoff Dancy, who teaches a course on conspiracy theories, said in an interview.

In real life, according to conspiracy theory expert Jovan Byford, a senior lecturer in psychology at the Open University and author of “Conspiracy Theories: A Critical Introduction,’’ actual conspiracies are not vast endeavors, but relatively small and limited to specific locations and times. By contrast, he said in an e-mail, with conspiracy theories “the plot is always overarching, timeless, and makes implausible connections between disparate historical actors or events.’’

And often the theory can be pressed into service to explain almost anything.

Another difference, said Dancy, is that conspiracy theories don’t have a working hypothesis — that is, a plausible explanation of how the alleged perpetrators pulled off the event(s) in question. Dancy said he has recently been arguing with friends who believe antifa instigated the attack on the Capitol.

Trump voters have sought refuge in that notion, either to deflect blame or to resolve the contradiction between the MAGA movement’s putative support for law and order and the sight of a Trump mob battling Capitol police and overrunning our civic temple of democracy.

But how did antifa do it? And how does one square that false assertion with the many Trump-backing right-wing extremists being identified and arrested for their role in the riot?

“They have some memes and soundbites, but they don’t have a larger theory of how antifa supposedly organized this huge event,’’ Dancy said. “They just repeat the soundbites over and over again.’’

Which brings us to a related giveaway or tell: Does the contention in question exist at a level of specificity that allows it to be proved or disproved? If not, it’s not a credible explanation.

“Conspiracy theories are a kind of theorizing where you never have to admit that you are wrong,’’ noted Dancy.

Mind you, the lack of a testable hypothesis or actual evidence doesn’t matter to conspiracy theory adherents.

“For the conspiracy theorist, the idea of a plot is a fundamental, unshakeable principle,’’ said Byford. That, in turn, means the lack of evidence for their contention doesn’t cast it into doubt but rather demonstrates “the craftiness of the secret cabal behind the conspiracy.’’

Here’s one more tell: If the conspiracy theory requires the long silence of a large group of people, “it is really unlikely that that’s a good explanation,’’ Dancy said. He cited the example of the left-wing conspiracy theories that still swirl around the 9/11 terrorist attacks, several of which hold that it was an inside job.

Dancy says a course like his, which gives students the conceptual tools to separate plausible explanations from conspiracy theories, could be taught in high school. That could be done as part of an effort to improve the sorry state of civics education in America; people with a realistic understanding of how government works are less likely to be taken in by far-fetched declarations or postulations.

Given the difficulty of disabusing the converted of conspiratorialist beliefs once acquired, there needs to be a serious effort to keep Americans from tumbling into those rabbit holes in the first place.

Scot Lehigh is a Globe columnist. He can be reached at scot.lehigh@globe.com. Follow him on Twitter @GlobeScotLehigh.