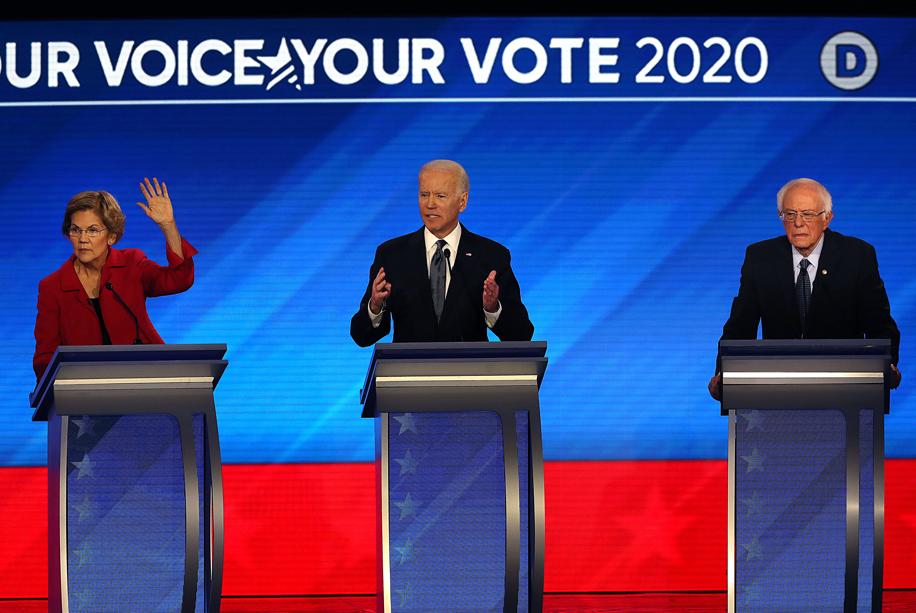 In February, Elizabeth Warren joined Joe Biden and Bernie Sanders on the debate stage. Now, her endorsement could be a boon to either man.

WASHINGTON — In the midst of an emotional goodbye to her presidential bid, Senator Elizabeth Warren had one clear message.

“I may not be in the race for president in 2020,’’ she said outside her home in Cambridge on Thursday. “But this fight, our fight, is not over.’’

Now that she’s officially ended her campaign, Warren has no intention of abandoning the sweeping policy agenda she sold for more than a year on the trail, and is mulling the best way to continue to push it forward in a field that’s narrowed between her ideological ally, Vermont Senator Bernie Sanders, and former vice president Joe Biden, whom she met decades ago when they were on opposite sides of a policy fight over credit card companies.

“She has issues and people she cares about; she has leverage, and we expect her to put the same strategic instincts into her next steps as she always has,’’ said Adam Green, the cofounder of the liberal Progressive Change Campaign Committee and a close Warren ally.

Warren’s most obvious piece of leverage right now? Her endorsement, which she is still weighing.

“I need some space around this and want to take a little more time to think a little more,’’ she told reporters on Thursday.

But in an interview with the Globe later that afternoon, Warren struck a defiant note, suggesting she is not necessarily going to endorse either man quickly.

“Why would I owe anybody an endorsement?’’ Warren asked. “Is that a question they asked everybody else who dropped out of this race?’’

If history is any guide, Warren may decide that the best way for her to wield influence over the future Democratic nominee is to hold her endorsement until a winner emerges, which could happen in a matter of weeks given how many delegates are awarded over the next two Tuesdays. That would give her a say no matter who wins the nomination, instead of risking alienating a candidate who could end up as president.

In 2016, Warren stayed neutral during the primary between Sanders and Hillary Clinton — even though she was more ideologically aligned with Sanders and faced pressure from his supporters to endorse — and then backed Clinton once she was the presumptive nominee.

Brian Fallon, a top aide to Clinton at the time, recalled that Warren’s later endorsement of Clinton gave Warren influence over some of the candidate’s staffing plans for her future administration. Warren, who believes strongly that “personnel is policy,’’ had binders full of liberal professionals she pushed Clinton to appoint instead of the old-guard centrists who had staffed prior administrations.

“She was primed to have a big say over people who may have worked in, say, the Clinton Treasury Department,’’ Fallon said.

Warren likely would want to retain the same degree of influence if Biden is the Democratic nominee, which could lead her to hold back on an endorsement until it becomes clear who has won the nomination.

“She knows how to acquire and wield power, and she may well conclude that not endorsing is the best way to wield power and influence,’’ Fallon said.

Biden, who’s struggled to adapt to the more populist rhetoric of the modern Democratic Party, could especially benefit from Warren’s help if he becomes the nominee. “If we’re not willing to take on the economic status quo, then we’re not going to win in November,’’ said Senator Chris Murphy of Connecticut. “I think she’s going to be a really important surrogate for whoever wins the nomination.’’

If Warren does choose to endorse early, her nod will not necessarily go to Sanders, despite their close agreement on a host of liberal policies including free college and Medicare for All. Warren has also spoken to Biden, and her allies say her primary concern will be taking whatever action gives her the most power to enact her agenda in the coming months.

On the trail, Warren has criticized both men — accusing Sanders of being ineffective and Biden of being too fond of the status quo in the face of widespread economic unfairness. And if either man is elected president, Warren is likely to return to her inside-outside strategy of pushing for her agenda of financial reform from within Congress while also marshaling her social media reach and extensive supporter network to demand change from the outside.

“She still packs a fearsome punch,’’ said Adam Levitin, a Georgetown law professor who is friends with Warren. “Certainly Biden knows that when she needed to be, she could be a thorn in the side of the Obama administration.’’

Warren launched an aggressive grass-roots strategy in 2014 to get the Obama administration to crack down on for-profit colleges, jettisoning the polite back-channeling that is more customary among allies in Washington. She did so again later to tank Obama’s nomination of a Wall Street banker to a Treasury job.

Since Warren can be a fierce opponent from the outside, a Democratic nominee like Biden could be especially motivated to bring Warren into his administration, co-opting the senator to avoid her outside pressure.

In an interview with ­MSNBC’s Rachel Maddow on Thursday, Warren gave little hint of her future plans. She jokingly did not rule out running for president again when pressed, and batted away a suggestion that she could end up as vice president to either man. Biden floated the idea of running for president with Warren on his ticket when he was considering a 2016 bid.

“The job of senator is a good job,’’ Warren said Thursday.

At one point, she directed viewers to her presidential campaign website to read one of her many plans, showing her continued attachment to the meticulous agenda she put together as a candidate.

Those who know her well say they wouldn’t be surprised if she ran for president again.

Representative Jim McGovern, who endorsed Warren, pointed out that, at 70, the senator is still young, compared to the men who outlasted her.

“I don’t think it’s the end of anything,’’ McGovern said. “She’s going to continue to be a major force.’’

Jess Bidgood and Victoria McGrane of the Globe staff contributed to this report. Liz Goodwin can be reached at elizabeth.goodwin@globe.com.