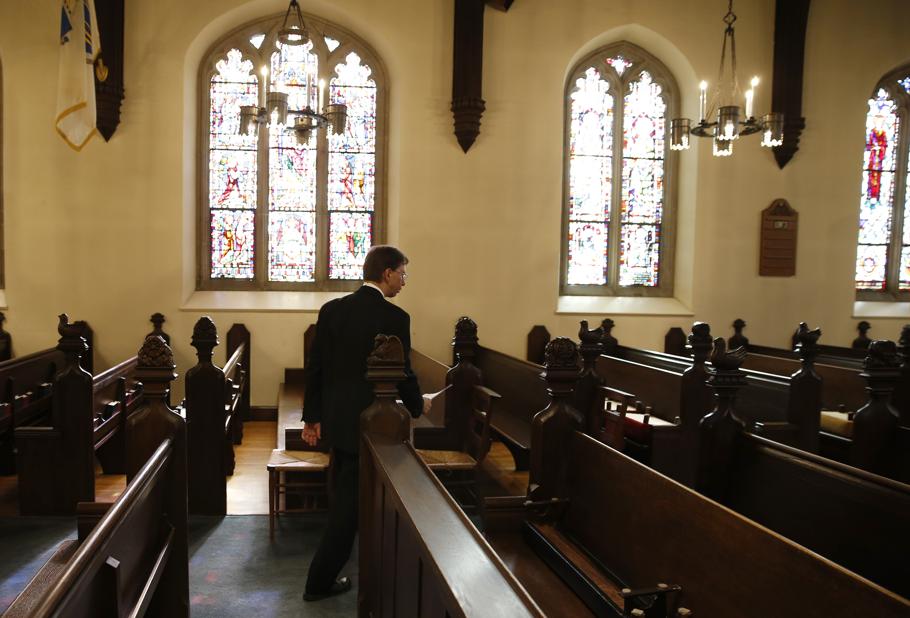 The Rev. Timothy E. Schenck, rector of St. John the Evangelist Church in Hingham, walked past empty aisles on Sunday before conducting a church service over the Internet using Facebook Live. 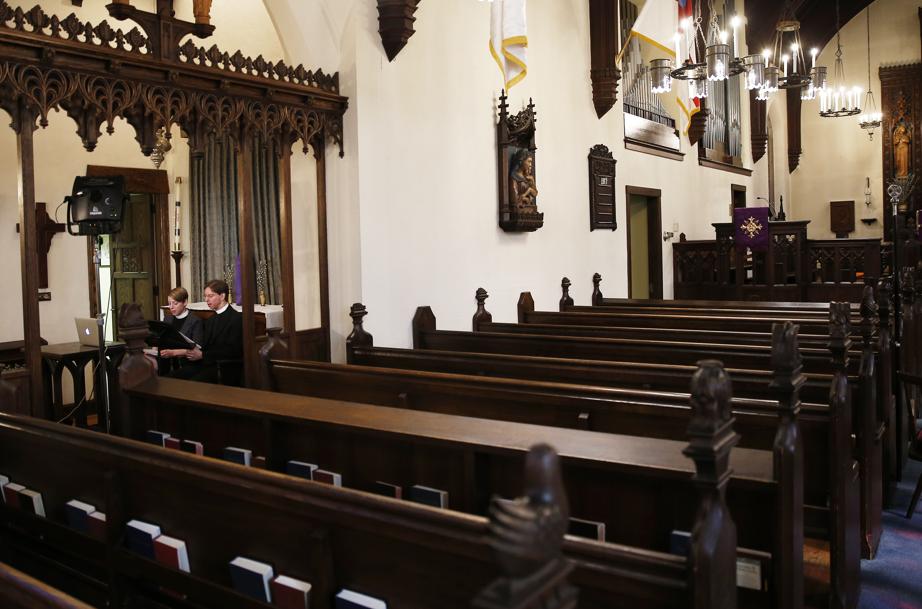 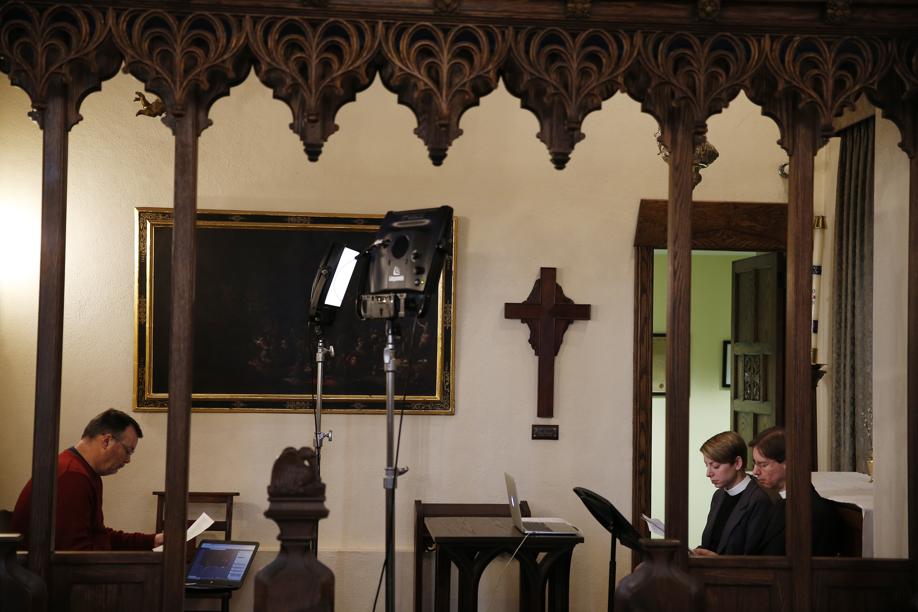 Vestry member Dave Clinton (left) acted as IT specialist for the virtual service.

The Rev. Timothy Schenck took a seat in the small chapel at St. John the Evangelist Church in Hingham a few minutes before 10 a.m. Sunday. He blinked at the bright, studio-style lights set up before him, and helped himself to one more jolt of caffeine from a large thermos.

“I hope you’re in your pajamas, drinking coffee, eating pancakes, and practicing social distancing,’’ the Episcopal priest said with a smile, gazing into a laptop computer screen. “This is all new, this is uncharted, and we are sort of making it up as we go along."

Like tens of thousands of churches, synagogues, and mosques across the country, St. John’s used a virtual bridge this weekend to bring religious services to its congregation, hoping to help protect its parishioners from the spread of the coronavirus.

The bridge at St. John’s was Facebook Live, and the 10 a.m. service, which normally attracts 200 congregants, was viewed by more than 400 people from Hingham to California to Canada. Although all the pews in the century-old stone church were empty, Schenck and his associate rector, the Rev. Jacqueline Clark, adhered to the service they would have celebrated had those dark-wood seats been occupied.

In his sermon — which Schenck wrote, as usual, in a local coffee shop — the rector mourned the loss of shared, physical fellowship. However, he said, “we are removed from one another precisely because we love one another.’’

“Normally, this would have been filled with people and music and children,’’ he said. “The difference is pretty stark.’’

At other churches across the region, the normal Sunday morning bustle also was stilled. At the Cathedral of the Holy Cross, the seat of the Roman Catholic Archdiocese of Boston, only a dozen people sat inside the cavernous sanctuary. All public Masses in the archdiocese have been canceled indefinitely, and the few worshipers at the cathedral had the place to themselves for prayer and reflection.

“At this point, it is necessary’’ to cancel public Masses, said Magna Deslandes, who paused as she walked slowly past the Stations of the Cross.

“But it’s not the like the doors are closed,’’ she added. “I believe we can experience God in an empty church. I believe God is watching and is with us in all circumstances.’’

Liz Lopez Rivera, 26, a visitor to the cathedral, disagreed with the archdiocese’s decision to suspend public Mass.

“I feel we need the sense of unity’’ that group worship can bring, she said. “Especially at a time like this when everybody is in fear. I feel we’re focusing on the negativity.’’

Dr. Thomas Heyne, an internist and pediatrician at Massachusetts General Hospital, said in a phone interview that he and his wife, Dr. Nancy Hernandez Heyne, are devout Catholics who support Cardinal Sean O’Malley’s decision to cancel Mass.

“The Mass is central to my life, and thinking of a week without going to Mass is painful,’’ Heyne said. “But this is a sacrifice that we’re called to make"’’ out of love of God and neighbor.

“The stay-at-home mantra seems to be the right thing to do,’’ said Heyne, who watched Mass online Sunday morning. “I felt a certain communion with my fellow Catholics around the world. In a way it was beautiful, and in a way it was heartbreaking.’’

For many, the absence of Mass left a deep void. Maria Quiroga, a member of the finance board of St. Mary of the Angels in Roxbury, watched Mass online, but she missed the physical community and shared concerns that bind the diverse congregation at St. Mary’s each week.

And she missed the music, which Quiroga described as a joyful blend of African-American gospel and traditional Catholic hymns.

“That’s a big part of our lives,’’ said Quiroga, who lives in Jamaica Plain. “This is a community that we’re very close to.’’

Quiroga said the small parish, part of a three-parish collaborative that shares one pastor and an associate priest, also will miss the donations collected each week, especially if the suspension is a lengthy one.

“We have to think about how to pay the recurring bills and the staff. We have to keep the lights on, plus there’s our obligation to the archdiocese,’’ Quiroga said.

In Hingham, the challenge was figuring out on the fly how to reach St. John’s parishioners via cyberspace. The original plan — to celebrate the liturgy while seated in two chairs placed near the altar — was tossed aside Sunday morning because of poor Wi-Fi reception there.

So, the chapel, an intimate space, was chosen as backup. Vestry member Dave Clinton sat a few feet opposite Schenck and Clark, helping the live service run smoothly.

Schenck preached about water, a sermon derived from St. John’s Gospel about Jesus’s encounter with a Samaritan woman at a well.

“Water gives life and growth. It cleanses and purifies. Through the water of baptism emerges our very relationship with Jesus Christ,’’ Schenck said. “And these days, it is used to wash our hands. Again and again and again.’’