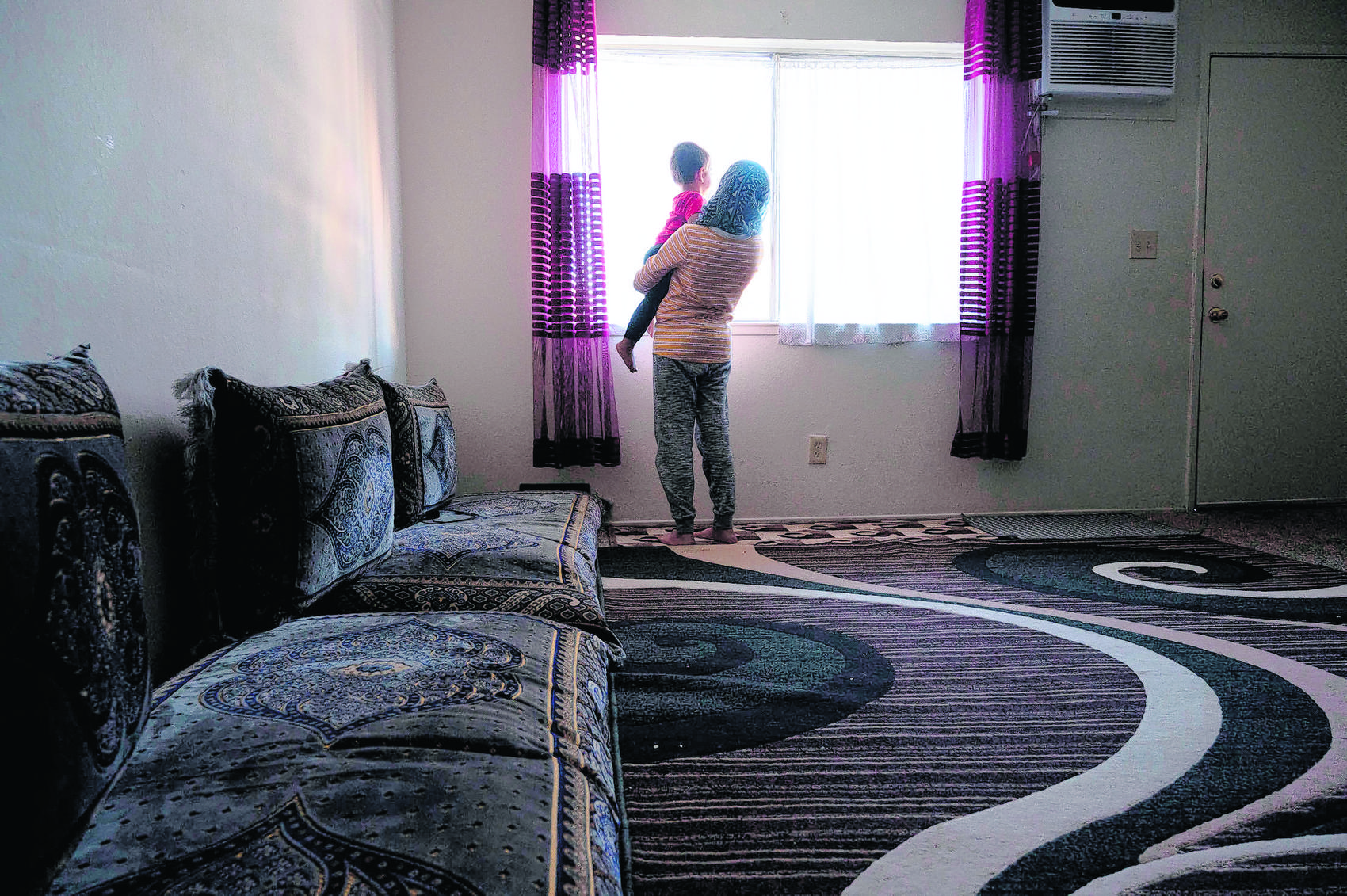 Two Afghan refugee children look out the window of a sparsely furnished one-bedroom apartment in West Sacramento where they live with their mother and two siblings in November. Their mother, the widow of an Afghan translator to the American military who was killed by the Taliban in an insurgent train attack, arrived in America nine months ago. 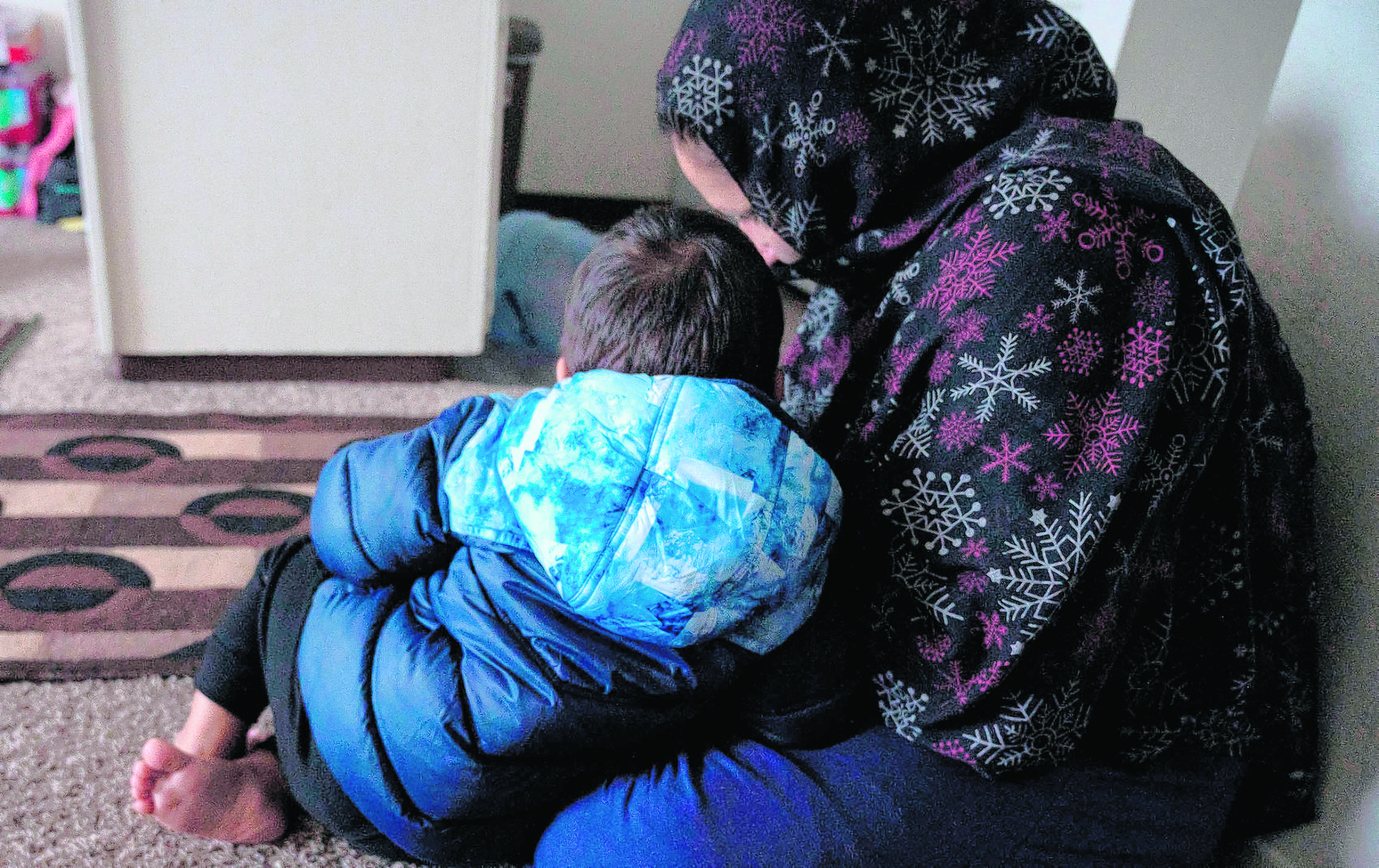 An Afghan refugee who requested her name not be used for fear of harm being done to relatives still in Afghanistan, holds her 2-year-old son on Nov. 24 at their sparsely furnished apartment in West Sacramento. She and her family are being helped by the Yolo County Children’s Alliance who connect her with various services to help her navigate in her new land.

Special to The Bee

A young Afghan refugee struggles in her new home of West Sacramento as no mother should.

She arrived in America nine months ago, the widow of an Afghan translator to the American military, killed 17 months ago by the Taliban in an insurgent train attack.

He had been escorting military personnel to a meeting in the Kandahar Province. Tragically, his murder occurred just a few weeks before her family, including four children, was to board a plane headed to the United States.

Today, the 26-year-old woman (who requested her name not be used for fear of harm being done to relatives still in Afghanistan) survives in a small, sparsely furnished one-bedroom apartment, where a donated TV is broken and there are few toys. There is not even a winter coat for her to grab when she needs to walk her children to school or take them to a nearby park to play.

Isolated and alone, with extended family more than 7,500 miles away, she spends her days ensuring her children are learning, happy and healthy, They include a 12-year-old daughter who loves science and one day wants to be a doctor; two 11-year-old sons who have learned English, like school and play basketball and soccer; and a carefree 2-year-old boy content on a recent day to tilt and then pull the upright vacuum cleaner around the living room for his own amusement.

She grieves the loss of her husband, and the circumstances of his death still haunt her. She misses her family, her brothers and her sisters and she is scared for their safety. She feels compelled to hide her identify out of fear that harm could still come to her family. For this reason, she asked to not use her real name and those of her children.

Without Ahmad Habib, community resource specialist with the Yolo County Children’s Alliance (YCCA), she says she isn’t sure she could manage. He connects her with various services and helps her navigate in her new land.

“She says she is grateful for a roof over the top and for her kids being able to get an education,” Habib said translating Dari into English at a recent visit. “One of them received a school certificate for high achievement.”

Habib has worked with the family since they arrived in February. She is one of many he counsels and assists who have resettled into Yolo County.

But it takes a lot of resources to meet all of the needs of all those living in poverty in Yolo County, families of all races, ethnic groups and ages, he said.

“The need is greater than ever, especially with the growing influx of refugees following the sudden formal takeover of Afghanistan by the Taliban, he said.

Book of Dreams readers are being asked to consider helping YCCA reach a goal of $15,000. The funds will supplement other sources that will enable the nonprofit to provide as much support as possible for the families they serve, said Katie Durham, YCCA’s resource and development manager.

Less than a month ago, the nonprofit put on its 16th annual “giveaway day” for West Sacramento families in the parking lot of Sutter Health Park.

More than 700 families came out and received Thanksgiving meal kits, blankets, diapers, baby supplies and coats for the children. Everyone had an opportunity to get vaccinated against COVID-19. About 250 families also received a $100 gift card.

”Throughout the year, we work to gather community support for the agency’s programs, emergency supply pantries and services,” said Francisco Castillo, YCCA’s board chair, in a press release the day of the event. “With that support comes resources for the thousands of people YCCA helps each year.”

YCCA uses its various sources of funding to pay for the salary of its resource specialists like Habib, 21, himself the child of an Afghan family brought to the United States for fear of the Taliban when he was a teenager.

“My dad was an immigrant interpreter, too. We came here in 2016 and everything in the environment was different, even the sense of smell here was different,” he recalled. In his last semester of high school, he worked the graveyard shift at a restaurant and then put in a full day at school.

He accompanied his father to many food distribution events at the YCCA Family Resource Center on Anna Street in West Sacramento. At 18, he was invited by the YCCA to apply to serve as a liaison for incoming Afghan families.

“I like to help someone who is at that place where I used to be,: he said. “I’ve been through it and I know what they are facing.”

It is a good job, he added, with the flexibility he needs to also work on a community college degree in dental hygiene. It is also a calling.

“God gave me all these blessings,” he said, “and I’ve got to use them to give back.”

As for the young Afghan mother, she hopes to attend the YCCA toy distribution event Habib told her about that occurs at the YCCA Family Resource Center on Dec. 18. In the meantime, she says, even though she has a long way to go to fully adjust, feel comfortable and safe, she still finds joy whenever she can.

Habib translated what she meant by that: “When she sees her child happy, then she is happy.” For now, that and the support of others like the YCCA will see her through.

How you can help

For more than three decades, The Bee has asked readers to provide a gentle lift to Sacramento organizations helping the needy during the holiday season. Last year, more than $200,000 was raised to help 32 community organizations. To help in this year’s Book of Dreams campaign, you can make a donation at: sacbee.com/bookofdreams