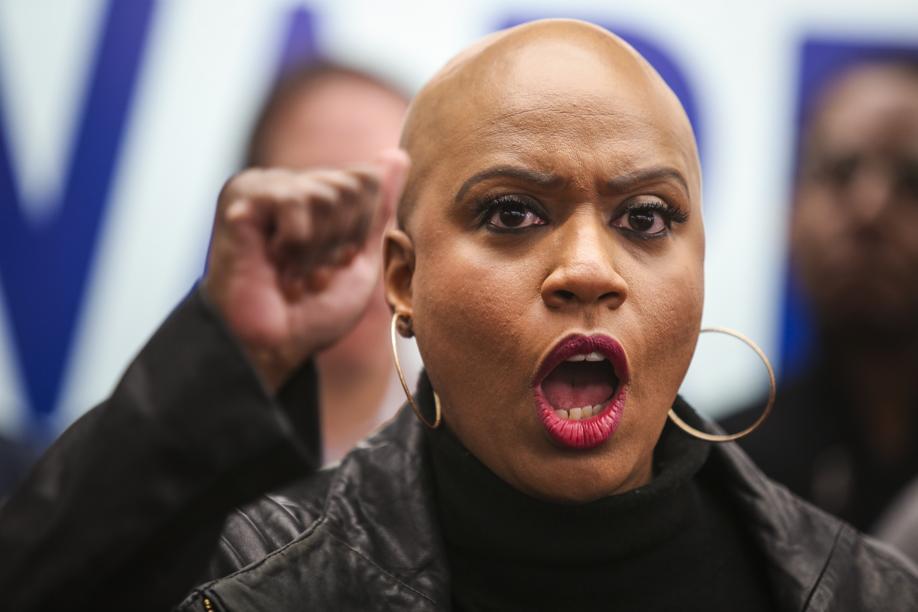 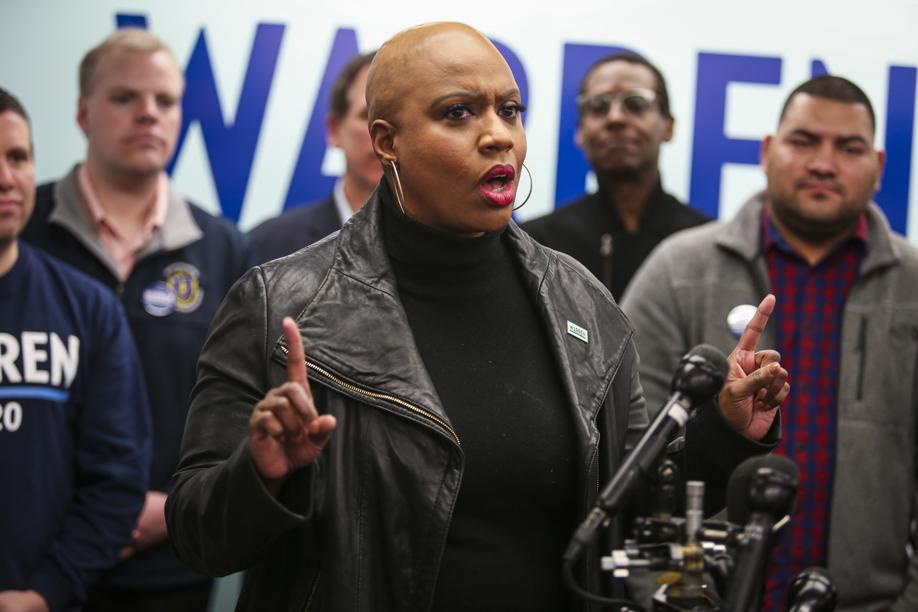 Congresswoman Ayanna Pressley helped kick off canvasses for Elizabeth Warren for President in Cambridge ahead of the state’s presidential primary.

Pressley, a cochair of Warren’s campaign, spoke to volunteer canvassers and callers in an office near Fresh Pond on Monday morning and in Jamaica Plain’s Hyde Square in the afternoon, touting the candidate’s focus on inequities of power and privilege and her practice of listening to people close to the issues and crafting solutions collaboratively.

“Elizabeth Warren is the starkest contrast to the equal-opportunity offender . . . abuser, and narcissist-in-chief,’’ Pressley said in Cambridge, slamming President Trump without naming him. “Here’s a guy that wants to go it alone, that sows seeds of division, that leads with chaos. And Elizabeth Warren . . . is a woman, by contrast, who doesn’t go it alone, who is about coalition, community, and movement-building.’’

Warren spent Presidents’ Day weekend in Nevada, campaigning ahead of that state’s caucuses on Saturday, the primary’s next big contest. But Pressley was joined in Cambridge and Boston by a bevy of local Democrats, including state Senator Sal DiDomenico; state Representatives Christine Barber, David Rogers, and Tommy Vitolo, and city councilors from Cambridge, Brookline, and Boston.

Pressley told the Cambridge crowd that Warren’s signature set of plans is “about power — who has it, who never had it to begin with, and who refuses to give it up. I’ve never believed the adage that a rising tide lifts all boats, because many people never had a boat to begin with.’’

Trump, she said, has used his power “to write draconian, xenophobic, oppressive policies.’’ In contrast, she rattled off a list of qualities she said Warren possesses, which all began with the senior Massachusetts senator’s first initial.

“Let me talk to you for a moment about the power of ‘E.’ Elizabeth is energetic,’’ she said, to whoops of agreement from the crowd. “She is empathetic. She is effective. And she is electable.’’

The crowd burst into applause.

Boston City Councilor Michelle Wu, a Warren ally since her first Senate race in 2012, said questions about that final E-word have overwhelmed voters she’s met while canvassing for Warren.

“This whole campaign in recent months has been about quote-unquote ‘electability,’ ’’ Wu said. “People have started to disassociate their own views and preferences and emotions with a very calculated decision of, ‘Who will the aggregate electorate pick in November?’ I try to bring it back down to following your heart, that the way that we get everyone energized in November is for people to be really excited about the candidate they’re supporting.’’

In Jamaica Plain, freshman Boston City Councilor Ricardo Arroyo spoke before a packed storefront about his experience as a public defender, offering legal services to people who "are unseen, who are dealing with policies and politicians who create more roadblocks to their success and their well-being than anybody deserves.

“I’m with Elizabeth Warren because I know she sees them,’’ Arroyo continued. “And besides just seeing them, she’s got a plan to deal with those struggles.’’

Shirley Shillingford, 78, president of the Caribbean American Carnival Association of Boston, came to the Jamaica Plain office to phone-bank for Warren, whom she has supported since the former Harvard Law School professor challenged then-Senator Scott Brown in 2012 and served as grand matron for Boston’s annual Caribbean Carnival.

“I’ve always admired her,’’ Shillingford said of Warren, praising her for standing up to Trump.

Many local Caribbean-Americans were loyal to Deval Patrick, the former Massachusetts governor, when he entered the race last November, Shillingford said. But when Patrick dropped out after a disappointing showing in New Hampshire, she said, “then all of our eyes and energy turned to Elizabeth Warren.’’

In Cambridge, Amy Kahn, 42, was getting ready to take her 12-year-old son, Joshua, with her for his first canvassing experience, though she and his 16-year-old brother spent time knocking on doors for Warren in Nashua before the New Hampshire primary.

The Newton resident said she supports Warren primarily because of her policies on education and health care.

“She is determined to undo what Betsy Devos is doing,’’ Kahn said, referring to Trump’s controversial secretary of education, who has no classroom experience and is an ardent supporter of school choice. Warren appeals to Kahn, she said, because of her support for public schools and her pledge to appoint an education secretary who has worked as a public school teacher.

Kahn had no patience for pundits ready to give up on Warren’s campaign.

“It’s only two states that have happened so far, and I have a long enough memory to remember when Bill Clinton was elected,’’ she said. “He didn’t win his first until Georgia. And I also recall that Barack Obama didn’t win New Hampshire. . . . So I’m not so worried about it.’’