Burned out? You’re not alone 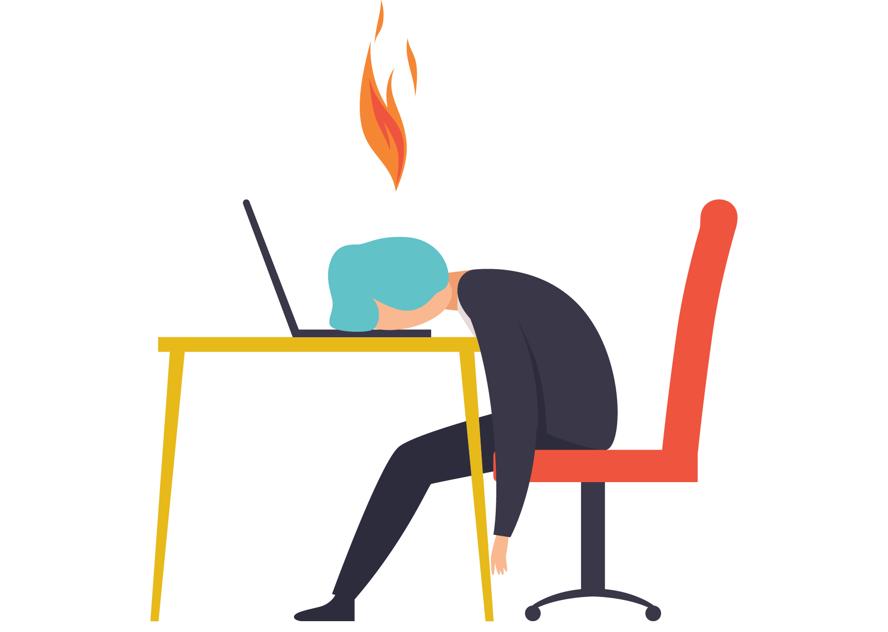 Janna Koretz saw a number of her classmates from Cornell University go on to “big jobs’’ after they graduated, only to burn out quickly from the intensity­ of the work. So Koretz, a clinical psychologist, decided to open a practice in Boston that addressed their needs. Nearly six years later, her business, Azimuth Psychological, focuses exclusively on people in high-pressure careers, and she can’t hire therapists fast enough. “It’s just sort of blown up,’’ she said.

As our jobs become all-consuming, with employees ­answering e-mails around the clock and companies trying to squeeze higher profits out of fewer people, more attention is being paid to the effect all of this is having on workers’ psyches.

In May, the World Health Organization announced that it is developing guidelines on mental well-being in the workplace and unveiled an expanded definition of “burnout,’’ based on new research in its International Classification of Diseases. Burnout is a syndrome resulting from “chronic workplace stress that has not been successfully managed,’’ according to WHO’s description, characterized by feelings of exhaustion, reduced effectiveness, and negative or disconnected feelings toward one’s job.

Burnout is an issue for workers across the board, from highly paid executives to lower-wage workers who have to string together multiple jobs or deal with unpredictable schedules that can wreak havoc on arranging child care and paying bills.

In Japan, a country with such an intense work ethic that it has a word for “death from overwork’’ — karoshi — there’s a TV show called “I Will Not Work Overtime, Period!’’

Last year, an Amnesty International researcher who killed himself at his Paris office allegedly left a suicide note about his heavy workload, prompting an external review that found employees were under “exceptional stress.’’

France went so far as to enact a labor law in 2017 that gives employees the right to disconnect from e-mail and smartphones when they aren’t in the office, and the New York City Council introduced a similar measure last year.

The expectation that workers stay tethered to their jobs after hours can lead to chronic stress and emotional exhaustion, according to a 2016 study that found participants spent an average of eight hours a week dealing with e-mail off the clock.

And this “always on’’ mind-set is tough to shake. In Boston, 60 percent of workers said that they would be tempted to check e-mail after hours even it was banned, according to a survey by the staffing company Robert Half Technology.

Boston is riddled with “workaholism,’’ said Koretz, the psychologist, from the proliferation of tech startups with free food and Ping-Pong tables that encourage people to stay at the office to the many high-achieving graduate students who flock here for school. Young people trying to stand out from the crowd are particularly susceptible to burnout, she said.

“It’s hard to tell your boss when you’re 24 that you’re not going to respond to them at 11 p.m,’’ said Koretz, whose website features a “burnout calculator’’ that allows users to respond to 10 statements, such as “I feel trapped by my job,’’ on a scale of 1 to 5 and then generates a score.

In a recent survey of more than 2,000 millennials by the Illinois psychiatric center Yellowbrick, 96 percent of respondents said burnout affected their everyday life. The majority felt pressure to find the “perfect’’ job, work long hours, and always be accessible through Slack or e-mail.

Nearly 70 percent agreed that millennials identified themselves only through their jobs. And this makes professional struggles even more profound, Koretz said: “If things don’t go well at work . . . then who are you?’’

It might come as no surprise that Chetan Jhaveri experienced burnout. Jhaveri, now 31, cofounded a startup while he was getting dual graduate degrees at Harvard and the Massachusetts Institute of Technology. The startup, ironically, was a mental-health matching service to help people find therapists and life coaches. About a year after it was launched, Jhaveri found himself struggling to do tasks that required deep thought, a feeling he describes as a “soupiness in my brain’’ that also led him to forget his father’s birthday.

“I was thinking about it all the time,’’ he said of the startup. “It was really hard to shut off.’’

The company eventually folded in late 2018, and Jhaveri went on a 10-day silent meditation retreat. He started meditating and seeing a therapist more regularly and now works as a freelance consultant helping companies launch products and services. “I’m in a much better place,’’ he said.

In a culture that promotes busyness, slowing down can be difficult, said Josh Cohen, a London psychoanalyst, professor, and author of the book “Not Working: Why We Have to Stop.’’ Social media are contributing to this by becoming repositories for people’s achievements, putting them in a constant state of anxiety or shame about what they haven’t done, he said.

Cohen has been struck by how many of his patients relish therapy, because it provides them a way to be “unavailable to the world,’’ he said. “It’s incredible to be somewhere where nobody seems to be expecting you to do or say anything.’’

Screens are sucking up so much of our time that people aren’t able to do what they really want, said Edward Hallowell, a psychiatrist who lives in Arlington and runs centers focusing on ADHD in Sudbury and around the country. This can put people in “survival mode,’’ making them impulsive, angry, inflexible, humorless, and unproductive.

But the issue of burnout goes far beyond technology, said Erin Kelly, a professor at MIT’s Sloan School of Management and Institute for Work and Employment Research. It’s a symptom of the way companies operate today.

Kelly studied the IT division of a Fortune 500 firm for her forthcoming book “Overload’’ — coauthored with Phyllis Moen from the University of Minnesota — and found that, like many other US companies, the firm was grappling with globalization, the offshoring of workers, increased competition, and pressure from investors to cut labor costs and produce the next big thing.

The workers she interviewed were expected to be available around the clock and multitask incessantly, which they said led to lower-quality work, sleep loss, and disconnection from their families and communities. There was, she said, “a sense of desperation.’’

But when the workers were given more control over their schedules and received additional support from managers, their feelings of burnout decreased, she said, even though their workloads hadn’t changed.

Some companies are starting to realize they have to help workers manage stress. Robert Glazer, chief executive of the Needham marketing agency Acceleration Partners, knows how hard his employees work, and he wanted to be sure they were recharging. So last year he started offering a $250 to $750 incentive for vacationing workers to stay offline.

Amelia Glynn, a client services account director, is among several dozen employees who have taken advantage of the program. Glynn, 32, a self-described workaholic and mother of a 2-year-old, couldn’t remember the last time she had completely disconnected on vacation. “Client services never sleeps,’’ she said.

But before a recent trip to Florida to visit her father, she deleted the Slack and e-mail apps from her phone — and stayed unplugged. When she got back, she felt like she had hit a “creative reset’’ of sorts and made major progress on a long-term project. She also started exercising more and eating healthier, accomplishments she attributes to having had time to reflect on her life.

She didn’t even have the “Sunday scaries’’ she usually has on the last night of vacation, worried that “tomorrow’s going to be hell.’’

Katie Johnston can be reached at katie.johnston@globe.com.