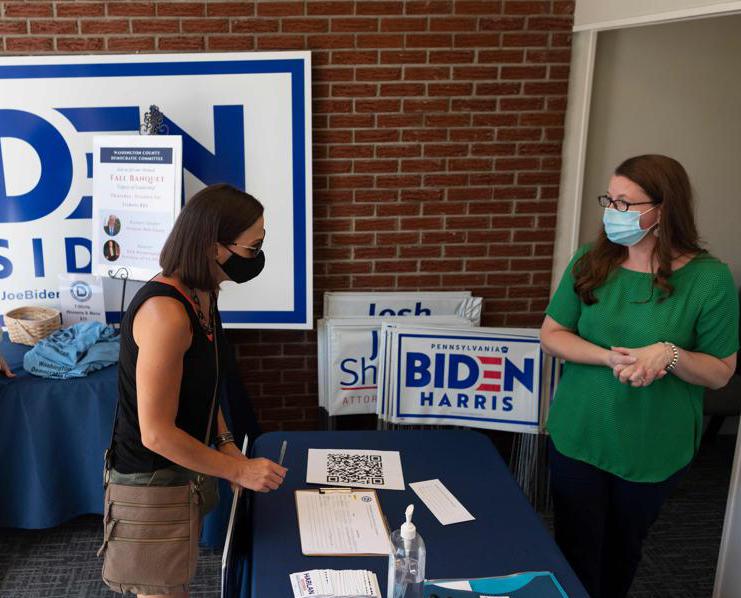 A presidential campaign long muffled by the coronavirus pandemic will burst into a newly intense and public phase after Labor Day, as Joe Biden moves aggressively to defend his polling lead against a ferocious onslaught by President Trump aimed chiefly at white voters in the Midwest.

Private polls conducted for both parties during and after their August conventions found the race largely stable but tightening slightly in some states, with Trump recovering some support from conservative-leaning rural voters who had drifted away over the summer amid the worsening pandemic. Yet Biden continues to enjoy advantages with nearly every other group, especially in populous areas where the virus remains at the forefront for voters, according to people briefed on the data.

No president has entered Labor Day weekend — the traditional kickoff of the fall campaign — as such a clear underdog since George H.W. Bush in 1992. Trump has not led in public polls in such must-win states as Florida since Biden claimed the nomination in April, and there has been little fluctuation in the race. Still, the president’s surprise win in 2016 weighs heavily in the thinking of nervous Democrats and hopeful Republicans alike.

Trump’s effort to revive his candidacy by blaming Biden’s party for scenes of looting and arson in American cities has jolted Biden into a more proactive posture, one that some Democrats have long urged him to adopt. The former vice president spent last week pushing back forcefully on Trump’s often false attacks, after encouragement from allies including former secretary of state John Kerry, whose 2004 presidential campaign faltered in the face of a concerted smear campaign about his Vietnam War service.

Both parties see Trump with a narrow path to reelection that runs through heavily white states including Wisconsin and Minnesota, where his strategy of racial division could help him catch Biden. Yet the president is also on defense in diverse Southern and Western states he carried in 2016, including Florida, North Carolina, Arizona, and Georgia.

Two Republican former governors, Tim Pawlenty of Minnesota and Scott Walker of Wisconsin, said that Biden had entered the fall with slight advantages in their states but that the race could easily turn.

“Can Trump win back some of those voters in the second and third ring of suburbs?’’ said Pawlenty, noting that those areas had trended toward Democrats. “They’re really unsettled by the violence, but the question is if it’s enough to reverse recent voting patterns.’’

Walker said Trump’s hopes in Wisconsin increasingly hung on the three presidential debates, which will “have an impact if it worries voters about Biden.’’

A consistent challenge for Trump has been his unwillingness, or inability, to drive a focused political message rather than becoming engulfed in less favorable debates, like his ongoing tirade against a report that he belittled American service members. His campaign also appears to be facing a significant financial crunch and has largely ceased advertising on television even as Biden begins to spend heavily from his war chest after raising about $365 million in August.

The former vice president is airing tens of millions of dollars in ads rebutting Trump’s law-and-order-themed attacks, though some in his campaign are hoping to quickly return the focus to the coronavirus and the economy.

Biden is slated to visit Pennsylvania on Monday and Michigan on Wednesday, his third and fourth trips to critical swing states since last week, when he traveled to Pittsburgh for a speech rebutting Trump’s attacks and then to Kenosha, Wis., to meet with the family of Jacob Blake, a Black man shot by police, and with others.

Morgan Jackson, a top adviser to Roy Cooper, the Democratic governor of North Carolina, said his surveys after the conventions indicated that Biden had a steady, if modest, advantage in the state and that the small number of swing voters were chiefly concerned about the pandemic.

“Charlotte is not burning,’’ Jackson said. “That’s a conversation taking place on Fox News but nowhere in reality here.’’

Senator Amy Klobuchar of Minnesota, the former Democratic presidential candidate, said Biden had so far struck the right chord for a Midwestern audience.

“Joe Biden’s words in Pittsburgh — that he both supports police reform and condemns lawless looting — were exactly what people needed to hear in Minnesota and across the country,’’ she said.

The best chance for Trump, Republicans say, is to drive at a singular message linking Biden to the far left.

“He has to continue focusing on the network of anti-American lawlessness,’’ former House speaker Newt Gingrich said of Trump, urging him to “emphasize American patriotism and history versus the left’s anti-Americanism’’ and to “turn Biden into McGovern.’’

Trump’s campaign advisers maintain that their private surveys are more encouraging than public polling. But while Trump’s swerve toward a strident law-and-order message has helped him consolidate conservative support, his rhetoric about rioting in a handful of cities does not appear to have swayed moderates, strategists in both parties said.

That is a serious problem for the president, given the lack of significant third-party candidates in 2020, which raises the pressure on Trump to win over new voters.

In his campaign’s data, Trump is leading Biden on the issue of the economy, though at least one senior official has cautioned that the president should not take too much encouragement from that; some Democratic and independent voters, the official said, see Trump as strong on the issue but still plan to vote for Biden.

Liesl Hickey, a Republican strategist who has been conducting extensive research on suburban voters, said the pandemic remained their central concern.

“The virus is still the most important issue for voters,’’ Hickey said. “Their lives are still disrupted. Schools are closed; businesses are closed.’’

Allies of Trump believe there is virtually no chance that he can win the popular vote, and they have seen some states on his victorious 2016 map shift markedly away from them.

They are particularly pessimistic about Michigan, which Trump narrowly won four years ago, and are looking to flip Nevada, which has many white voters without college degrees, and especially Minnesota, the state he lost by the closest margin four years ago and the site of weeks of unrest following the police killing of George Floyd.