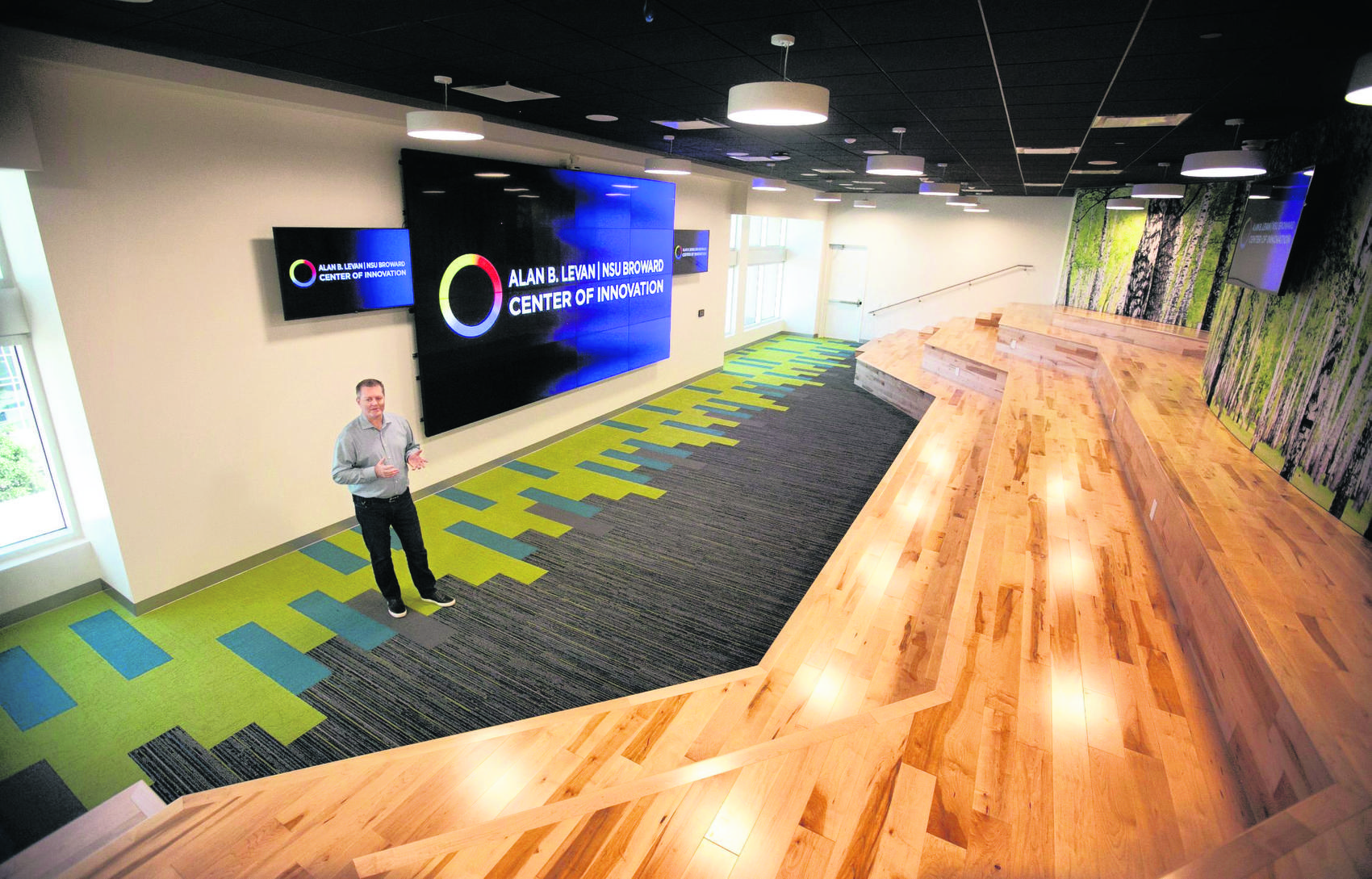 John Wensveen, chief innovation officer and executive director of the Alan B. Levan NSU Broward Center for Innovation at Nova Southeastern University, is pictured inside of the purpose-built elevator-pitch space, where entrepreneurs will interact with investors to raise funds for their ideas. 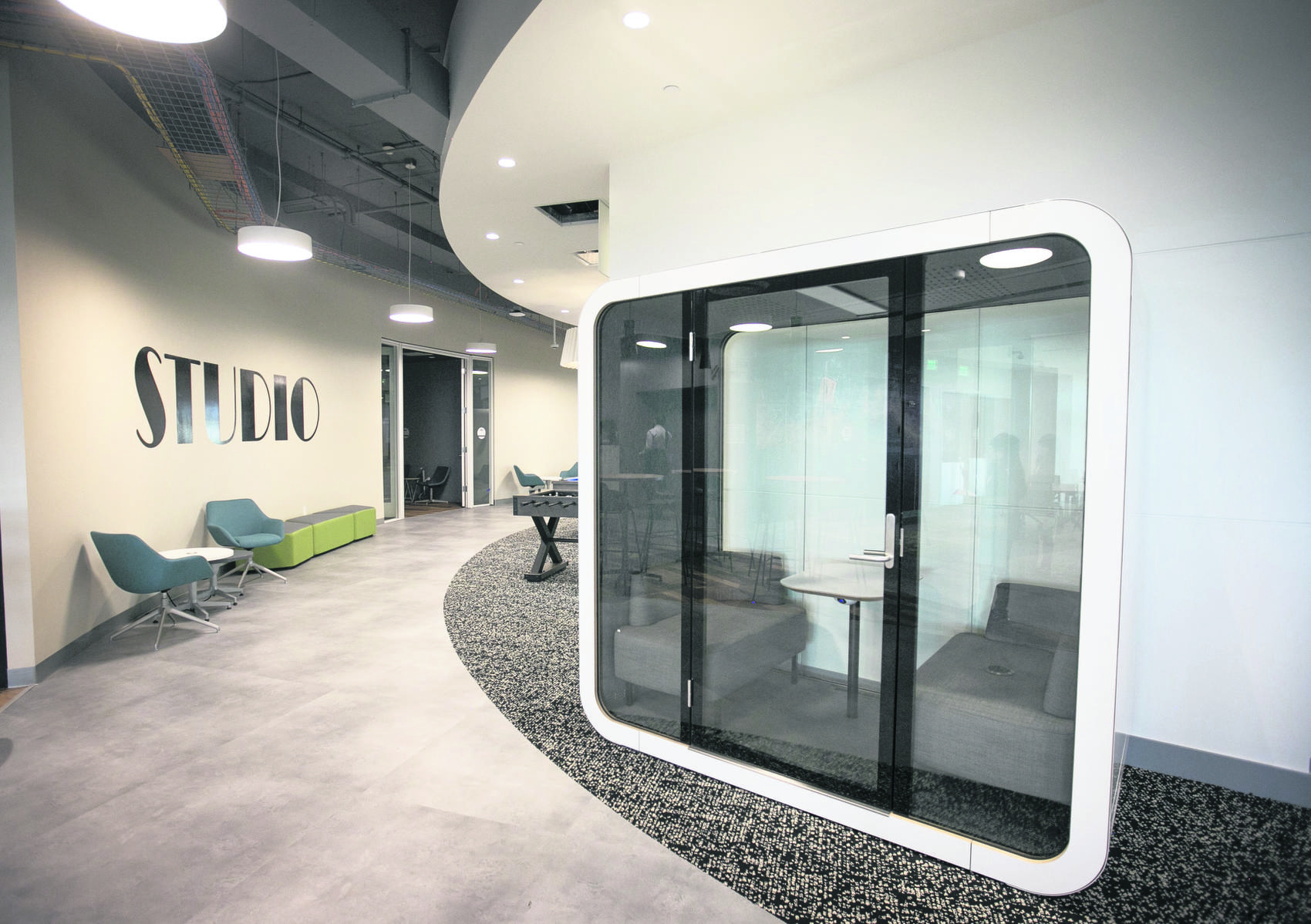 One of several innovative work pod spaces offer a private area to work or study at the innovation center at Nova Southeastern.

On the fifth floor of the Alvin Sherman Library at Nova Southeastern University in Davie sits a $12 million, 56,000-square-foot innovation center with:

A media production center for creating podcasts and webcasts

A venue for collaborating with entities engaging in commercializing space exploration

Its creators are hoping that the space, officially called the Alan B. Levan NSU Broward Center For Innovation — named after the chairman of BBX Capital — can serve as a new, regional tech hub, not just for Broward but all of South Florida.

“Not only is it a place for students, faculty and staff to advance innovation and entrepreneurship through the patents and research we are doing, but it’s also designed to help the county as it incubates startup businesses,” said NSU President George Hanbury II. “It’s a venue where venture capitalists can hear pitches so our founders won’t have to go to Silicon Valley or Cambridge, but they can stay right here in South Florida.”

It’s a broader bet on tapping into the startup ecosystem creation model that has swept other locales across the country. As traditional economic engines have declined or shifted overseas, cities and regions have increasingly sought to establish innovation clusters that can serve as bedrock economic engines for their communities.

“Place matters,” said Anna Mason, managing partner at the Rise of the Rest Seed Fund, an investment group focused on supporting startups outside traditional technology powerhouses. “We see opportunity through the lens of geography. That means what’s actually happening on the ground with physical development and how has it evolved.”

Planning for the Levan Center began four years ago, well before the current Miami tech boomlet that kicked off last winter. Meanwhile, Miami Dade College has also opened its own cybersecurity training center, the Cybersecurity Center of the Americas.

After a pandemic delay, Broward and NSU officials executed a soft launch of the center last month. It also recently secured a $742,787 grant from the U.S. Economic Development Administration to support institutions “challenging the status quo” through finding ways to accelerate businesses and grow jobs.

John Wensveen, the center’s director, describes it as a “theme park for entrepreneurs” and an “economic development machine for South Florida.” Among its goals is to make the region a nationally ranked tech hub.

“It was built with the psyche of an entrepreneur in mind,” Wensveen said. “It’s designed to support the founder’s journey from the birth of an idea to exit.”

When Rise of the Rest’s Mason and her team visited Miami and South Florida in 2019, they were struck by the multiple centers of innovation that had sprouted throughout the city and region.

“I wouldn’t pigeonhole Miami,” Mason said. “In every ecosystem, there are a lot of different pieces to the puzzle, and part of the challenge and opportunity and call to action, especially in maintaining focus on diversity, equity and inclusion — sometimes one-size-fits-all is not answer.”

“When I think about our visit,” Mason continued, “I can think of different physical spaces and more figurative communities where I could see this different models all continuing to come to life.”

These multiple hubs may be interpreted as a strength — different experiences for different tastes and needs — or as a challenge that makes it harder to coordinate on a regional level.

Tim Hasse, General Provision’s founder, said the entire region has benefited from the charge led by Miami’s recruitment of new innovators to the region.

At the same time, he said, Fort Lauderdale offers something Miami does not.

“I love to remind everyone that Miami tech is not only about a singular city, it’s a regional effort — that’s a unique advantage we have,” Hasse said in a recent interview. “No doubt Miami itself is going to have the main point of activity. But as people make decisions about quality of life, or buying a new home, the Broward and Palm Beach region offers so many great options that still allow for someone to still capture the lifestyle of Miami tech.”

The Levan Center planners believed a more substantial, centralized presence was needed. Among those guiding the vision of the Levan Center has been Bob Swindell, president and CEO of the Greater Fort Lauderdale Allliance. He said the Center is designed to fill a void Broward and NSU officials saw when they first began plotting a path forward for the county and region as a tech hub several years ago.

“We don’t have a central catalyst like they have in other communities,” Swindell said.

Planners had specific innovation centers in mind when coming up with Levan. These included The Merchandise Mart in Chicago (recently rebranded as The MART), which has been converted into a headquarters for local startups, the Capital Factory in Austin, which bills itself as “where the technology community comes together to learn and connect,” and the MaRS Centre for Impact Investing in Toronto, another startup incubator and accelerator.

Swindell says a visit to the MaRS Centre was inspiring.

“The director had this expression: ‘The unintended consequences of accidental collisions,’” Swindell said, “meaning that when you get people from different disciplines together, amazing things happen; that’s where innovation occurs. Just by striking up a conversation with someone from a totally different background, it’s amazing how a kernel of idea ... can change when it’s challenged differently. They were offering something that we don’t have in Broward or South Florida.”

In Hanbury’s view, South Florida is filled with startups that have not been able to scale up. The reasons for that may vary — but having a facility like the Levan Center can only help.

“We’ve set the stage and allowed the venue for startups to scale up,” Hanbury said. “And they’re meant to collaborate — either starting to work with existing businesses, or attracting businesses to use it, whether virtually or in person — just like the Merchandise Mart.”

“There’s a lot of research that documents the value of those collisions,” he said. “There is a value in physical locations that attract early-stage founders and startup executives.”

Even if such a venue is necessary, it may not be sufficient. Center representatives said it currently has three active tenants: Bond Moroch, a New Orleans-based marketing company setting up a satellite office; Tangent, a health group; and PeakActivity, a digital strategy group based in Boynton Beach. In addition to leasing space at the Center, PeakActivity also announced in July it would be partnering to bring augmented reality experiences to the center.

A Center representative said other organizations, individuals, and startups are about to finalize agreements to use the space.

What is needed more than anything to get startups off the ground, Hacker said, is money — and exposure to money.

“We need ‘angel money’ that will help companies before they have revenues, and we need more pre-seed and seed funds,” he said.

“We need more of that professional investor writing early-stage checks, and then we need to help get students better at dealing with those kinds of investors,” Hacker said. “There’s a right way and a wrong way to design and present a pitch, and do your due diligence. If there was more money around, there’d be more attention paid to those kinds of skills.”

In fact, pitch refinement is part of the Levan Center curriculum. Among other Center programming is a four-part startup course for founders: Idea, Incubate, Accelerate and Post-Accelerate.

South Florida resident Jason Garcia, a father of three and a startup founder, went through both Ideate and Incubate this summer. In addition to helping craft and refining the pitch for his family photo-sharing app, called Queso, Garcia said the programs helped reduced his “imposter syndrome” and instilled in him confidence that he could execute his idea.

“There is so much that I don’t know as a first-time founder,” Garcia said. “The mentors at the Levan Center helped in so many different ways.”